How to balance IBU's based on differences in yeast attenuation:

Say I have a nice balanced beer that pitched Nottingham and attenuated 80%. Now say I want to use an English ale yeast that's going to attenuate 70%.

1)In the beer with yeast that attenuated 80%, does that mean that the yeast left 20% of the sugars unfermented, and the 70% attenuated beer has 30% remaining unfermented sugars?

Hey! I've never had to wait this long for a reply at HBT before!


Do my assumptions not sound right? Sounds spot on to me, but it's all still just speculation on my part. I'd like to use what I learn from the replies to help brew a batch when I wake up, so I hope there's at least one reply/opinion when I log on in the morning.

Now, time for some sleep after a night of belatedly celebrating SWMBO's b-day

I'd expect that an increase in IBU would help balance the increase in unfermented sugars, but I don't think doubling IBUs is in order. Frankly, I think we just need to wait until a really great recipe designer drops in who has a handle on the subjective perception of malt/bitterness balance in beers at different attenuation levels.

(which is why I didn't initially weigh in)

The missing piece is your not fermentable sugars. What part of the OG of the first brew was composed of sugars too big for yeast to digest?

Are you using _exactly_ the same wort for the second batch with the different yeast?

Just because I understand the problem doesn't mean I know the answer. I probably would not modify the hop rates at all, but I don't know what you are brewing. Is this a barley wine or a near Pilsner?
OP

It has NO aroma, NO malt, and a lot of bitterness. It just has no character to support that bitterness.

So, I picked up another 6lb of amber DME and instead of Nottingham, I got some lower attenuating While Labs English ale yeast . I'm not going to use nugget - probably going to use Northern Brewer for bittering and Cascade for aroma, or I might just use cascade for the whole thing.

I just don't have a clue on how much hops to use for this. Furthermore, I don't know what the AA% was on the Nugget they gave me (I was too new still to record that), so I can only assume it's somewhere in the range that Beersmith has for Nugget by default.

It all gets confusing since there is real and apparent attenuation.

This chart is a good place to start, and you may be able to reverse engineer it to fit your question a little closer. As a rough guess, a 10% difference in attenuation would only merit a 5-10% difference in bitterness. 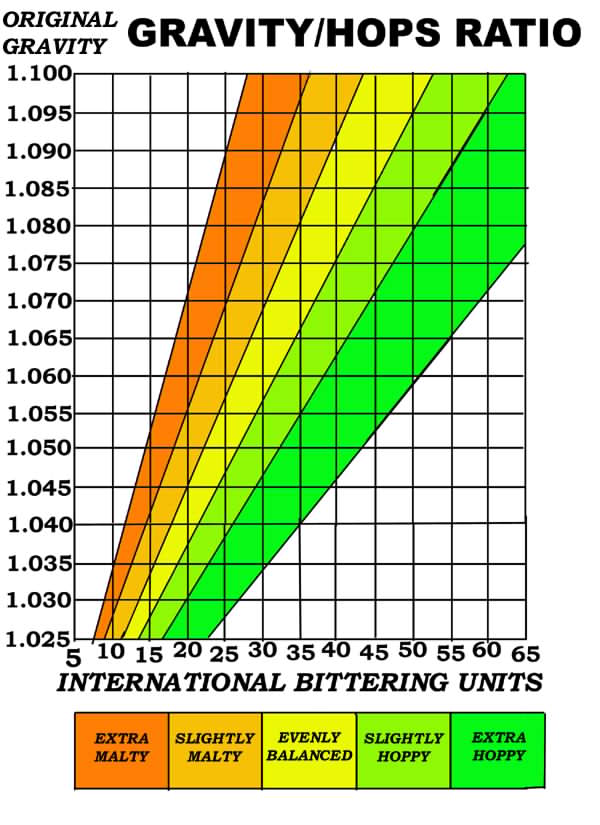 EDIT:
After a little math, a beer with an OG of 1.060 would finish at 1.017 for an apparent attenuation of 70%. It would finish at 1.011 if the apparent attenuation increased to 80%. That's a difference in FG of .006. Using the chart above as a guide, a difference in OG of .006 equates to a change in IBU of about 4-5 to achieve the same balance. It's not a perfect answer because I'm mixing FG and OG in order to determine the answer, but it seems about right.
OP

Wow, thanks for pointing the 4-5 IBU out! What software is that chart a part of, and does Beersmith 1.4 have something similar (I bought bs1.4)?

I don't know if that chart is included with any software. You find the image referenced often in discussions like this one, though.

BeerSmith has a BU:GU ratio calculation that is useful in determining hop balance.

1. No - As mentioned, you are talking about "apparent attenuation." It's called "apparent" because it only looks like you are fermenting out all the sugars. There are a couple things out there that you are not considering. First, sugars are not the only things adding density to the wort. You have longer chain saccharides, proteins, and probably some other junk in there. Second and more importantly, reducing sugar content is not the only thing reducing wort density during fermentation (i.e., alcohol is less dense that water). That's why you have to make adjustments when using a refractometer after fermentation begins.

2 - No, for pretty much the same reasons as above. Brewer's yeast will not ferment those proteins, longer chain saccharides, and other junk, so more of that stuff stays around than the sugars. Of course, some sugars survive, too.

3 - No, pretty much for the reason in #2. You already saw that cool chart that Yuri posted.