How many on here own/operate a brewpub or microbrewery?

Currently building out ours and was just curious how many on here took the leap? What are your favorite online communities for questions & classifieds?

I'm sure there are a few, though I imagine at least some of them choose to go incognito as they're in "research" mode. For the record, I'm just a homebrewer.
OP

I don’t understand why it’s such a stigma to want to start up a brewery as a home brewer. I get that you’re turning a hobby into a job but if you love it enough why not? Haha

I don't think "stigma" is the right reaction. I would never be disapproving of such an effort.
Otoh, "doubt" could be ample

I guess I've never seen it in direct conversation here just more of a "I would never........" statement. I have seen it in person though among homebrew groups but maybe it could have been misread there as well.

With proper planning doubt can be minimized right

Talked to a local homebrewer gone "pro" by opening his own brewery and he told me after 5 years he had yet to turn a profit. Then the pandemic hit and reported a 75% decrease in sales when the pandemic hit. Sixteen hour days with no pay would probably make me hate anything beer. Doubt indeed, but best of luck...

I feel like these days, the only new ones that are surviving are those with a good food...
C

Something I started looking into heavily the first part of the year. After a lot of research, and I do mean a lot, I determined I just don't have the financial resources to make it happen yet. That, and my primary partner had a financial downturn, so now longer have a partner to help weather a storm should it occur. We are in a thriving craft beer market, COVID had very little effect overall locally. Everyone I've spoken with about the venture was very positive about it given the absence of a brewery in close proximity to our chosen location.
M

Seems like a great way to make brewing beer unpleasant.

Yeah. Sounds like a lot of work and hassle that could ruin a good hobby.

I’m with you @yoop89 currently in full research mode and have just started the business plan process. This is not to say I will be taking the leap of faith but I will be prepared if I do lol. Good luck to you! 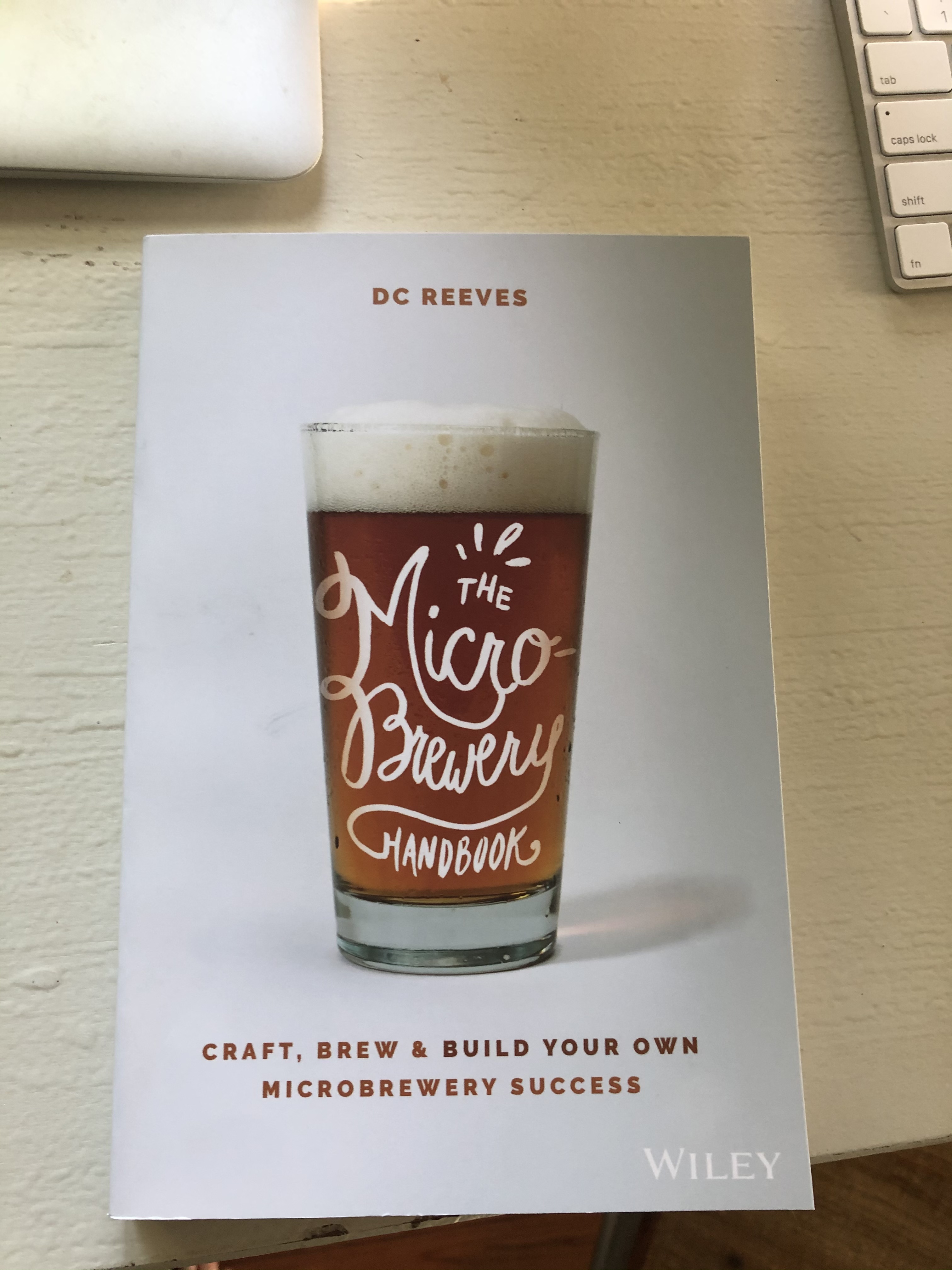 ...as well as John Szymankiewicz's book, BeerLaw - What Brewers Need to Know
OP

...as well as John Szymankiewicz's book, BeerLaw - What Brewers Need to Know
Click to expand...

I have all of those and read them through. Even have Mr. Henessys signature in the BOM. Got to meet him last November after attending his class.

@Dgallo how far into researching are you? I’d love to talk more if you’re interested.

It very well could be but I’ve always believed if you love what you do for work you’ll never work a day in your life. Even as a hobby brewing “can” be stressful right?

This is exactly the conversation I was looking for. I was hoping I would get both sides to jump in.

I'm not a professional brewer but I am a small business owner (one man show). I am sure that being successful as a brewery has a lot in common with being successful in the restaurant business. It is not enough to make a good product. One has to know how to run a business. That is a much more complicated realm than having the ability to make good beer. I love to cook and am told I am very good at it. Many people have suggested that I open a restaurant. I do not have the skill set necessary to run a restaurant. Running a business is a full time occupation. If one wants to brew beer and run a business that would be the equivalent of having two full time jobs. I don't want to discourage anyone from doing what they love, just be sure that what you will have to do to be successful at it (running a business) is also something you love as it will consume virtually all of your time for the first several years at least.

Many people enjoy and thrive on the challenge of envisioning, planning, organizing and overseeing the operation of a business. A well run business does not even have to produce a top quality product (think McDonald's). It has to have a viable plan and be managed properly. I think most fail for lack of good management.

The other option rather than opening your own is to let someone else do the business and assume the risk, and work as an employee and not an owner/operator.

The way I see it, if you value your time at all you'll pick one or the other. A homebrewer with business sense will usually do better as an owner and hire a professional to do the brewing (and listen to them, I've seen places ruined because an owner who'd homebrewed a few times thought they knew better overruled their brewer). If you're adamant on doing the brewing, get some professional experience as an employee first, and then partner with someone else.

Most successful operations I've encountered if the brewer is also owner, it's part owner partnered with someone else handling the business side. Simply not enough hours in the day to do both AND be successful.
OP

Qhrumphf said:
Simply not enough hours in the day to do both AND be successful.
Click to expand...

100% agree with this. I've heard this repeated multiple times and all of the successful microbreweries I have toured have followed this plan as well(the few that were "brewer/owner operated").

There is one local micro that is husband and wife & ran as a "retirement hobby". The quality struggles as does the menu. I cant imagine they are doing well as a business but after talking with the owners they dont really care if they make any money off of it as long as it pays for itself(which is an interesting business model that I have not run into before).

This is an interesting topic, I have a couple of those books as well. I would not personally go into it alone, I have discussed some business plans with a life long friend and his wife, we are all in our 30's with elementary age kids. Obviously now is the time for us to take the dive but it is the time to plan plan plan. If it happens someday, great, if not, I currently like what I do but that doesn't mean I want to do it for another 30 years. Who knows, but best of luck to any and all that do make that dive.

yoop89 said:
I don’t understand why it’s such a stigma to want to start up a brewery as a home brewer. I get that you’re turning a hobby into a job but if you love it enough why not? Haha
Click to expand...

as a homebrewer, you should know if you try to use it to exploit me, i'll kick your ass....at least that's the stigma in my eye when people 'want' to be drug dealers....

and on that that note, as long as the big boys, goverment, don't hold my hands behind my back and let you beat me up, fair fight!

yoop89 said:
I guess I've never seen it in direct conversation here just more of a "I would never........" statement. I have seen it in person though among homebrew groups but maybe it could have been misread there as well.

With proper planning doubt can be minimized right
Click to expand...

My perspective is limited to what I have seen, and here's the worst case: the biggest home brew supply retailer in New England rode the wave of home brewing (I remember the heydays and they were a blast!) but also saw the writing on the wall wrt the decline of home brewing, and decided to put his money into a brew pub. After many years of trying to get through the multilevel regulatory burden - which was mostly focused at the town level - he was able to finally open a small pub while also sub-leasing space to another nascent brew pub.

Which was weird, but not for long: within a few months of FINALLY opening, the whole thing collapsed and is now a legal miasma for everyone involved...

I don't know anything about this (and you can stop reading here), but I've heard of people setting up with their own product line and having contract brewers actually make the beer. Allows you to take on some but not all of the load. The downside being that more of your profits go to contacting, and potentially intellectual property theft.
OP

bracconiere said:
as a homebrewer, you should know if you try to use it to exploit me , i'll kick your ass
Click to expand...

I would never! I will always promote the craft that is home brewing.

I have been involved in the start up and operation of 9 breweries and brew pubs. ALL of them separated operations from production. Most of these were in the 7-15 bbl range. Best thing I can say is to join the BA and go to the Craft Brewers Conference and trade show in Denver in Sept. You will meet lots of people in your same position and lots of people who can help you move along to help you reach your goal.

If you wish more information, please PM me and we can continue this discussion.
Cheers, Wayne

I used to have my own business (not beer) but the big recession around 2006-2008 put me under and I had to get out. My boring and sometimes dangerous state job comes with a pension some perks and lots of OT, so now even though I'd prefer to start a NANO/Bistro with the income being about 50/50 beer and food, I just can't give up the job I now despise. I'm just too close to retirement.
So I ran all the numbers a few years back and the first year you are going to bleed cash since you have to buy or rent a business space before any of your licensing gets approved. People are starved for entertainment and generally tired of the cookie cutter TGI Friday's corporate franchise type of beer/food joint. So build it and they will come. But your beer, food and service better be good or you'll get raked over the coals with internet reviews. Some state laws make it difficult, but in some states you can literally start in your garage at home and build that into a brew pub.
Here's a story of a truck driver who retired from the road, started brewing on a 12 gallon system, moved up to 3.5 bbl and now has a 10bbl system and a cafe. This place is in a very rural area, but not too far from the interstate, and obviously people can find their way there. Trying to replicate this in a high cost urban area would likely put you under too much debt make all your payments. Note that the owner probably had the house paid off, so if it didn't work out for him, he'd be fine. So perhaps consider driving a truck for a few years, or find some other way to make big bucks, obtain and pay off a property not too far from a freeway exit in a rural area and go for it.

About Us — Screech Owl Brewing

Shreveport, LA brewpubs and or microbreweries

How many other college students are on here?
2

How many people own a breaztalyzer?

How many cars have you owned?
2