How long can you leave liquid yeast after the best-before date?

It seems to be a regular question, how long before liquid yeast is dead or unusable. Well here's proof that you can revive liquid yeast that's nearly 5 years old, this was an out-of-date pack of WLP540 that I got from the old Hop & Grape ages ago, then with one thing and another I didn't get round to using it, then I was locked down the other end of the country to the fridge where it was, and so on. Anyway, last week I tipped it into a little 5% DME, then into 200ml of 10% DME, then this was a vitality starter again of 10% DME and within a few hours it was ripping through a small test batch of pale ale.

Yah I've only had one true DOA on a way out of date white labs older style tube. There's usually something in there unless it's been cooked, just gotta bring it back to life slowly!

I recently did an annual viability check on yeast stored on cryobeads at -20 for 5 years. Dead as dodos. I suspect storing at fridge temp is better than -20 long-term. I wish I'd stored some cryobeads in the fridge 5 years ago for comparison

those dates are uber conservative. Dry yeast several years old is often viable. Liquid if kept in the fridge is also likely to last long beyond the date.

But either way, unless it was in the 99 cent bin I would pass.

I have no problem using yeast that is several months beyond the "best by" date but 2017 is a little extreme. If you really wanted to play around with it, I would do 2 or 3 builds on it, 2L at a time. Just my $0.02
OP
OP

More tales from the crypt, this time with Wyeast as well as White Labs for a comparison of the alleged "De Koninck" strains.

Similar protocol to before - around 20ml went into 100ml of 5% DME on Sunday 10 April, then tipped off most of the supernatant and added 200ml of 10% DME on Wednesday 13 April, and then again in 10% DME at the start of brewday on Good Friday. All starters are pressure cooked before use, each 200ml gets 1 pellet of whatever hop I have kicking round the freezer - Nugget in this case - just to keep unwanted visitors away. Thoroughly shaken before inoculation and then shaken whenever I pass by (~3 times per day), incubated in my airing cupboard at a somewhat variable ~25°C (77°F).

The 3655 raced away, the 515 was a bit behind but still very happy, the yeast harvested from the De Koninck bottle was always sluggish but bubbled away slowly. Ideally I would have given the harvested yeast another couple of days, but I was up against a hard deadline of going away for Easter so was kind of committed to brewing on Good Friday. Now that I'm back - there's a ring of barm in the fermenter so presumably it's made beer.

It also probably didn't help that I cooked the final DME for the harvested yeast a bit more than the other batches, but it had been slow in the previous starters which were the same as the other yeasts', I guess the bottle just didn't have the cell count. 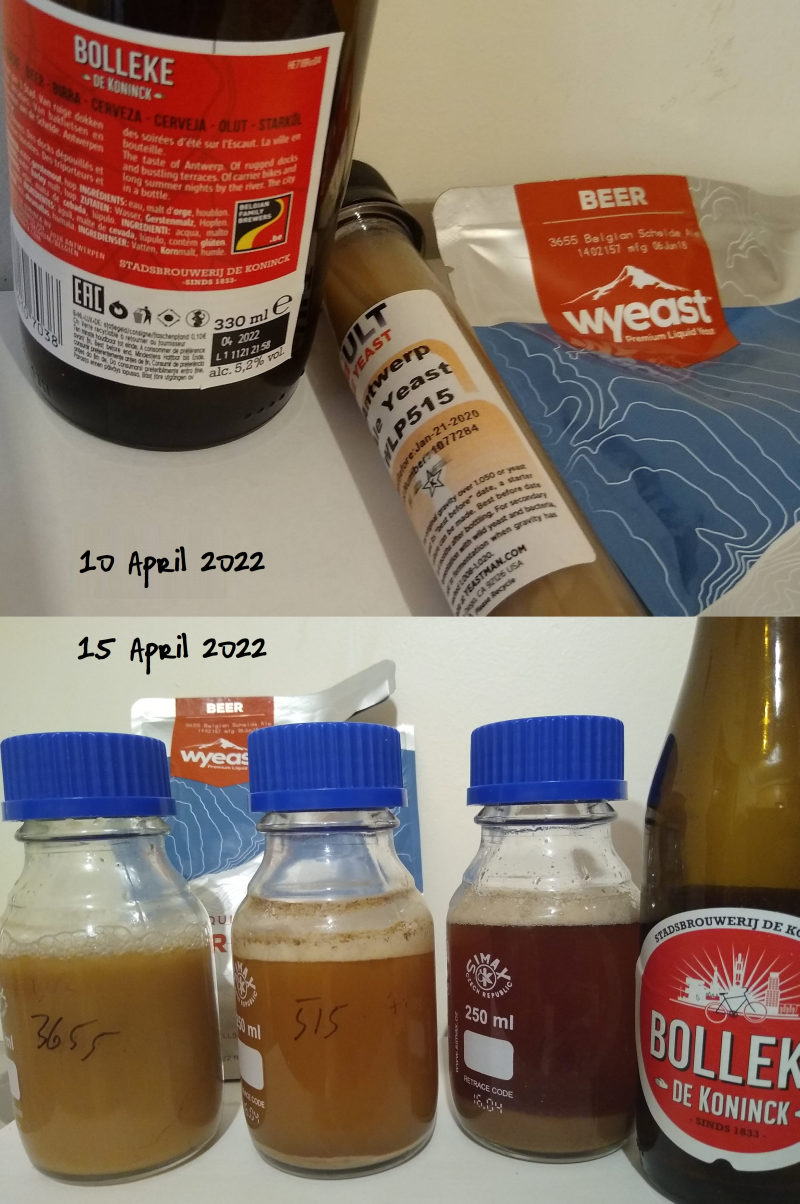 But how do they TASTE?!
OP
OP

dmtaylor said:
But how do they TASTE?!
Click to expand...

Too soon to tell on the De Konincks, I've only just got back from Easter so they're getting dry-hopped today.

As for the ~4.5 year WLP540 in the original post - it was fine. Of course, the real question is - does it taste different to fresh WLP540, and I don't have the answer to that. And I don't intend to buy any fresh yeast until I've made more of a dent in the stash of 20+ strains that I accumulated just before lockdown and then was separated from for the duration of lockdown. But yep, it was fine, although it was rather overshadowed by the actual Rochefort yeast harvested from a bottle of Rochefort 10, which was definitely more complex and just nicer as a result.
H

hottpeper13 said:
I'm noticing a theme, there all Belgian.
Click to expand...

That's just a coincidence, they're probably the only Belgians in my stash, I was just going on a mixture of a) what was oldest and b) I wanted something fairly clean as I was using a rare hop that I suspect is not very characterful. Perhaps a more accurate description would be "weird" Belgian strains that are non-phenolic. WLP540 is not "Belgian" as such, its ancestor was a British strain that Rochefort found in the Palm yeastbank in the 1960s, it's descended from something like Ringwood or Whitbread.

Interesting genome sequencing of some yeasts

Solid work there NB. I see as well the Gallone paper has WLP860 in the mix, but not sure if the sequence data is available , maybe they've released other data to see if that's a Saaz type as them all being Frohberg is pretty unexpected... I wonder if Vin7 is POF+ or POF- ? Maybe worth some...

I've had a Wyeast 1217 West Coast revive after 3+ years, which is another of the Chico family. So no, I don't think it's particularly dependent on what kind of yeast it is, although it is bound to have some influence at the limits of viability.
D

Today I bottled a small batch of beer with 1469 that I recovered with a stepped starter from a jar of yeast slurry harvested in November 2015. That 2015 batch was made with 1469 I grew up from a bottle posted to me by a brewer on another forum. The sample today tasted good. A simple 1.042 bitter with Challenger and First Gold. It's resilient stuff, yeast. I feel some strains more resilient than others possibly? From my limited experience of resurrecting old yeast. WLP644 seems as tough as old boots, for one.

Dead Yeast? No starter activity, no krausen no bubbles in 24hrs. Which option is best?

L
Old yeast in a starter