How is my airlock?

I heard of many people using balloons as airlocks and just letting the air out when they get full, but I actually did it and found that on the large bottle openings (around 4cm) they just naturally let the pressure out and never inflate, I can also squeeze the balloon and they hiss out the extra air inside.

So I am thinking... Do I really need proper brewing airlocks? To me I don't see any reason other than being able to time the bubbles, and I could also just time the farts with this if i want haha. This is easier, cheaper and thus I will never run out of airlocks. I do of course clean the inside of the balloon very well before using.

These are 2 ciders btw, am thinking to brew beer the same though.

You want the air in the headspace to be able to easily escape and be replaced by CO2. A good ferment would probably blow the balloon off if it forms a seal. If the seal is weak you risk contamination. Also, I'm not sure how well you can sanitize a balloon.

Airlocks are cheap. Why not use the correct gear?

For me i use regular airlocks. For less than $2 bucks a piece and i can use them countless times for anything i'm brewing, I see no reason to use a balloon or other. You can also just get tubing and place in a cup of sanitizer for your airlock. IF thats all you have then go for it. Just have to make sure it doesnt let any air in and it should work fine.

Noz03 said:
To me I don't see any reason other than being able to time the bubbles
Click to expand...

Ask around...timing the bubbles is the least useful aspect of an airlock.

Air locks are cheap. Like 3 bucks. Are you willing to risk contamination over $3?

I agree. Airlocks are only a couple dollars. & they let the co2 being produced to mix with the air in the head space. Eventually overtaking it & resulting in just co2 in said head space. Cheap insurance to get a good,safe ferment.

The airlock is all about sanitation. You don't want to run the risk of anything wild yeasts or anything getting into your fermenter. For $2 it is not a huge expense. The balloons in my opinion would probably not be a proper way to seal.

I don't think timing the bubbles is accurate to determine when fermentation is complete. But it's a good window into when you might take a sample to actually check with a hydrometer.

Back when I used to make hobo wine in college, I used balloon airlocks on plastic jugs similar to your setup, except that I would poke several pin-prick sized holes in the balloon to allow gas to escape when pressure built up. The positive pressure from fermentation and the self-sealing nature of rubber were enough to keep any air from ever getting back in. The balloons would even inflate just a little bit, but not as big as in your picture. The hobo wine always turned out fine this way (or as fine as hobo wine can be, anyway).

That being said, airlocks are cheap. Rubber stoppers are cheap. There's really no reason not to use a proper airlock.

While I don't think you're necessarily risking much by using ballons, I have to agree with the others who're wondering why you're not just using the correct equipment. At least at my local shop, standard 3-piece airlocks are ninety-five cents a pop. I buy one whenever I go, whether I actually need it right then or not. Seems like there are more worthwhile ways to cut corners than playing around with balloons, ya know?

Well,if the FV is sealed well,& you had a healthy yeast pitch & vigorous ferment,then when the airlock slows or stops,you can tell when initial fermentation is done. but it'll still take a little time to slowly,unevetfully creep down to FG.

"then when the airlock slows or stops,you can tell when initial fermentation is done."

With all due respect, this isn't true. There are plenty of examples of airlocks showing no activity, even though the ferment is still quite active otherwise. And I know you said "as long as it's well sealed", but the problem is that there's really no way to completely be assured that the vessel is, indeed, well sealed. Even a small leak can keep the pressure from affecting the airlock enough for it to bubble.

BattleGoat said:
"then when the airlock slows or stops,you can tell when initial fermentation is done."

With all due respect, this isn't true. There are plenty of examples of airlocks showing no activity, even though the ferment is still quite active otherwise. And I know you said "as long as it's well sealed", but the problem is that there's really no way to completely be assured that the vessel is, indeed, well sealed. Even a small leak can keep the pressure from affecting the airlock enough for it to bubble.
Click to expand...

Yes it is,I've been observing this sort of behavior from my FV's since the beginning. but as I've stated several times on here,you have to have a healthy yeast pitch. Not to mention,not shocking it with wide temp differences between the yeast & wort. By being sealed,I simply meant that the lid is on all the way,airlock inserted far enough to not leak around the grommet,etc. Obviously,no seal is 100%,but we can get close enough by properly installing the lid,etc. I've also fixed small leaks due to molding flash in the lid seal area.
If there's no vigorous airlock activity,it simply means that if you're fermenting at the low range of the yeasts ideal temp range,it's fermenting more slowly,co2 isn't being produced in large quantities & you'll see less airlock action. Even though it is indeed fermenting.
Or if the rehydrated yeast is at,say 85F & the wort is at 65F the yeast can shock & you'll notice little airlock movement as it goes back into the reproductive phase before visible fermentation starts.
These are just a couple of examples to explain what is seen in regard to airlock activity,or lack thereof. After all,50% of all science is informed observation...

I only paid $1 for my airlocks. That's probably cheaper than balloons.

Could you imagine that balloon full of Krausen exploding after a super active fermantation kicks in. That is one mess I wouldn't want to clean up. JS

Yeah,like the FV got the hershy squirts...

I made come hobo wine as an experiment and used a ballon for an airlock. The fermentation got pretty crazy and filled the balloon but it didn't blow off. The finished product has a latex smell that makes it pretty unappealing. I have since bought a small stopper and extra airlock for the next time I do this. It cost me less than 2 bucks for both.
OP
N

Sorry for the late reply, wrote the question and then went off on a short holiday aha. Well theres a few reasons, first of all simply being that I literally couldnt think of any reason not to. Also it is because I do not have a proper brewing kit, I was planning to brew small batches in 5lt water bottles, so a single set would need 4 lots of air locks, which Im not even sure would be easy to fit to a water bottle. On top of that as my country only has about 1 month of spring weather I was planning to brew 2 or 3 kits at a time and stock up for the summer. So at least 8 locks and stoppers which wouldn't be used again before next autumn. pretty bad setup but its the best I can do where I am

As for the balloon, I heard using the pressure of the ferment to keep o2 out is quite dangerous but what is happening with mine is the balloon fills up to a certain point (never much bigger than in the picture) and when the pressure is enough it farts out a certain amount of air in one go, usually every 3-4 minutes. So to me I don't see how it could let any air in like that.

In my opinion this is the only setup to use at the beginning of the ferment: 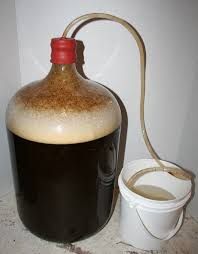 Afterward use a real airlock.

I've used the balloon method in the past in a pinch.

I think the balloon method works fine. Are there better options? Yes. However, the balloons do keep the O2 out. It seems like yours are releasing the CO2 on their own. I think that the CO2 produced during fermentation will blanket the wine nicely and help avoid oxygenation.

I would be concerned only if the balloons were popping off the fermenters and needing replaced. I have heard that putting the slightest of pin holes in the balloons works nicely to ensure the CO2 has a way to diffuse.

S
how long will my airlock bubble?

S
How necessary is an airlock?

How relevant is airlock bubbling?

How important is an airlock really??