Ok, so I have tried reading several threads on this issue. But it it rather confusing and there are many variables, so I am hoping to get some feedback on my specific situation.

So I brewed a fruit wheat beer. Half batch watermelon wheat and half batch raspberry. I looked up pressure guidelines and for wheat beers I found a higher recommendation of 3.3-4.5 volumes. At 38 degrees, the calculator called for pressuring at 20-32 psi to achieve this. This is much higher than where we typically serve our beer, which is around 12. The beer sat at this pressure for about 4 days, (which I realize is considered rather short by some), but still I have some questions.

We carbed at 24 psi. Serving today, the beer was really shooting out of the tap. Also, the glasses were highly foamy, (although it settled) even after the first pour (after which, things are usually much better). We bled the headspace, and depressurized to a lower amount (12 or so), but the beer was still quite foamy, and didn't taste like a highly carbed beer to me, tasted somewhat flat still to me.

Is it recommended to serve beers which require higher carbing psi's at a lower serving psi?

The beer line is pretty short, from the keg in the kegerator pretty much straight up to the tap, a few feet maybe.

My current plan is to let it set for another 5 days or so at the higher pressure, and to serve at a lower one.

The bottom line is a dispensing system must be tuned to handle the beer.

Yours is an outlier situation that nevertheless can be handled using the one and only line length calculator worth using.
Set your pressure and the other relevant criteria and you'll find you're going to need a lot of beer line to tame such an effervescent brew.

Also...it takes a good couple of weeks for a 5 gallon batch in a cornelius style keg to reach equilibrium given temperature vs CO2 pressure. Four days is barely getting started...

Beer line length is definitely your problem. I used this formula when setting up me keezer. It came from http://www.franklinbrew.org/wp/?page_id=98. Check it out. It will solve your problem. Plus a little work. 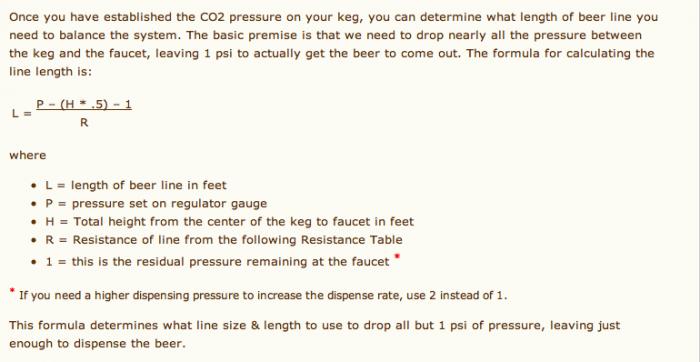 Getting the banned back together

The reason it tastes somewhat flat is that you're losing a bunch of your carbonation in the form of foam during the pour due to a poorly balanced serving system. Reducing the serving pressure isn't the solution, and will likely make the problem worse. It will help for the one pour after reducing pressure and venting, but then as it sits CO2 will want to come out of solution, creating pockets of gas in the beer line and making the subsequent pours even foamier. That and it will slowly reduce the carb level of the beer. You need the serving pressure to match the carbonation level of the beer, and the line long enough to slow the pour down to prevent excessive foaming.

The warmer or more highly carbed a beer is, the slower/gentler it needs to be poured. At a certain point you'll have trouble with excess foam no matter what, and you're approaching that point. I'd suggest shooting for a slightly lower carb level, and using some very long lines to slow the pour rate down to >12 sec/pint. The spreadsheet calculator linked above can help you figure out what length that would be.


McGlothan said:
Beer line length is definitely your problem. I used this formula when setting up me keezer. It came from http://www.franklinbrew.org/wp/?page_id=98. Check it out. It will solve your problem. Plus a little work.
Click to expand...

That equation won't likely work well for the OP. It ignores some basic laws of fluid mechanics, and is designed to result in a flow rate of ~1 gal/min, which is much too fast for a beer carbed that highly. The warmer or more highly carbed a beer is, the slower/gentler the pour needs to be to prevent excessive foaming as it hits the glass. The calculator day_trippr linked above works great, but you have to know the proper flow rate to use for your particular beer temp and carb level, which can be tricky.

If you're serving beer close to commercial conditions (~36° and 2.7 vol) then the formula you posted works pretty well. Even then though, I'd prefer longer lines that give me a little more flexibility.
OP
J

Thx guys, all very helpful. Until we get the proper lines installed, we will settle for what works best with our equipment. We had this beer sitting for an extra week or two after the initial serving, at our standard serving pressure (about 10 psi). When I tried it the next time, it was carbonated very much to my liking. The first pour is always a little foamy, but the rest of the beers in the session pour rather nice. Thx again.
You must log in or register to reply here.
Share:
Facebook Twitter Reddit Pinterest Tumblr WhatsApp Email Link