I'm starting to think about building a HERMs system and have been scouring the forums looking for ideas. From everything i've read here are my plans so far. I don't have too many folks to bounce ideas off of so here is a really long post and I'd appreciate any comments that point out issues that I might have, ways to simplify the build, or ways to keep the costs down.

Here are a couple of constraints that I have/need to keep in mind:

1) I live in an apartment and brew out of my garage which is already packed with too much stuff. So unlink many other setups I need to not make this a permanent fixture and instead be something that i can collapse down to an extent.

2) I've been in the process of continual upgrades and like most people I don't want to buy or build something that later I have to replace when I make the next upgrade. My series of upgrades has gone from extract brewing on a turkey fryer to all grain brewing with a cooler MLT, a second larger kettle for boiling, and a second burner. Where the turkey fryer is now the HLT. Everything is gravity fed at this point.

4) I'm an EE so small circuits aren't too scary. On the other hand heat, fire, welding aren't my forte. This is one reason why I'm thinking about a HERMs setup rather than a RIMS.

5) Like all DIY projects, I'm trying to keep this simple and cheap.


Here is what I think this will do and some of the whys. (I realize the text is too small unless you click on the picture so I'll try to comment on it in the post)

In general, this is a continuous recirculating system. The idea is that when the temperature is too low the wort will be directed through the HLT. When it is at the desired temperature the wort will go round the HLT and circulate back into the mash tun.

Wort out of the mash tun goes into a small catch jug (blue). I'm thinking cheap insulated water bottles for this like the coleman 1/3 gallon jug. This is to avoid the pump from pulling directly from the mash tun so that I can avoid clogging. The jug will be set to be on a slope to help catch some of the trub and a small hole will be drilled to drain the water out.

Issue #1: I need to figure out a what to stop the circulation if I am not draining fast enough through some type of float stopper. Any suggestions are helpful

Next the water goes into a 3 way valve that either direct the water to run through the HLT or go directly to the pump. The valve is electrically controlled by temperature controller. I'm thinking an STC-1000+ that can do mash profiles is perfect along with a simple relay board to drive the valve in the desired position. Oh, the controller temperature probe will be in the blue jug too.

In the HLT, I'll use copper coils for the heat transfer. I will also need to make some small standoffs so that the coils doesn't go below the drain valve. The wort drains to the red jug. (I need to make sure the tubing doesn't melt and might need a heat shield). The red jug is positioned so that it is below the drain. There is an air vent to allow the wort to drain when the valve has closed the path.

The HLT is direct fired. For now I'm the controller and will turn the flame up and down as needed. As a future upgrade, I'd like to automate this will a controller, valve, and pilot light as shown.

When the temperature is good, the valve simply directs the wort to the red jug.

The red jug is just a copy of the blue one which will be useful so that i can swap them around as needed. I need to make sure that this jug can an amount of liquid equal to the wort in HLT path, the direct path, and the stop point of the blue jug. I'll have to calculate this a bit more, but I think the 1/3G is going to be too small. In the red jug the output goes to the pump. The pump cannot be run dry so a controlled by a simple circuit will detect wort levels in the red jug and turn the pump on/off at the proper times. With a quick look on the internet a circuit like this one will do the trick (just have to change the logic to be reversed)

All the wort is pumped into the back of the cooler. (I'm considering using PVC inside the cooler so that i don't need as much tubing. Thoughts?)

Question: Do you think i should insulate all the tubing? If I don't I wonder if this just means i circulate through the HLT more often.

The pump and valves will be mounted to a small board that I can move in out out easily. All the tubing is silicone tubing to handle the heat and it is collapsible. The cooler sits on a pair of sawhorses at an angle with a board bewteen them.

Okay, well that is a brain dump on my plans. Any feedback is appreciated. 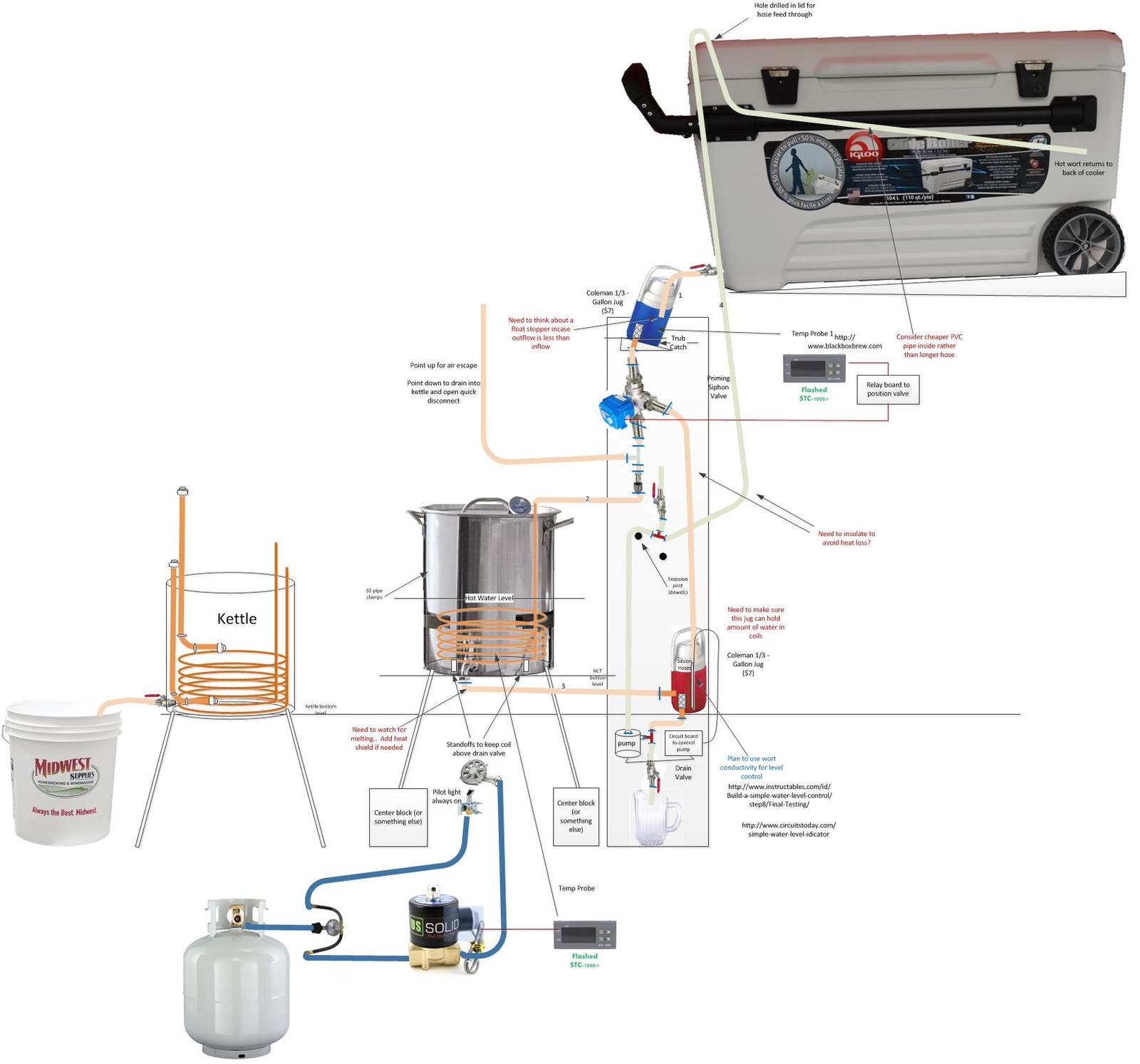 Would it be cheaper to use something link an ardunio and a mux that toggles back and forth between the HLT and 3-way valve so that i don't need 2 temperature controllers in the future? If so, seen anyone do something like this?

I'm thinking it might also be nice to go this route too so that I could add data logging and remote monitoring (i.e. watch things from inside my apartment) as future upgrades.
OP
OP

After looking around in definitly going to make an arduino controller that can control both the wort valve and the propane burner. There are plenty on inputs on an arduino unto to do this and several similar projects that I might be able to delta from.
OP
OP

So after looking at many other setups, herms and rims, I wonder if I'm over complicating things. Most setups seems to have a pump right on the hlt outlet and the other side directly on the mash tun. I would think the mash tun would get stuck with a pump pulling liquid through it or it would cavitate and lose its priming. Can someone come in here and tell me what I'm overlooking or what your experience is with such a setup. Thanks.
OP
OP

I have this setup a try, slightly modified from the pictures and had some flow problems. Cribbing from the hlt, mash tun, and kettle took way too long. Almost a trickle. I feel as if there is too much back pressure from the tubing. I thought I had a stuck mash, but when I disconnected to tubing it flowed just fine (I moved the kettle to catch the wort)

Anyone run into this problem? How did you fix it?