based on the copious amounts of information here, as well as the permission of SWMBO, i've started to build an electric HERMS system so that i can ditch propane.

i started out building a control box with all the stuff on the "front" of the box. but having borderline OCD when it comes to cable and wire management (as well as being sure all the wiring was secure and attached after closing it), i decided to start over and install everything on the side panels.

working on the MLT manifold right now. kinda pissed that one of the lights came out off center on the box, but that's what you get for working late into the night in the middle of the week. 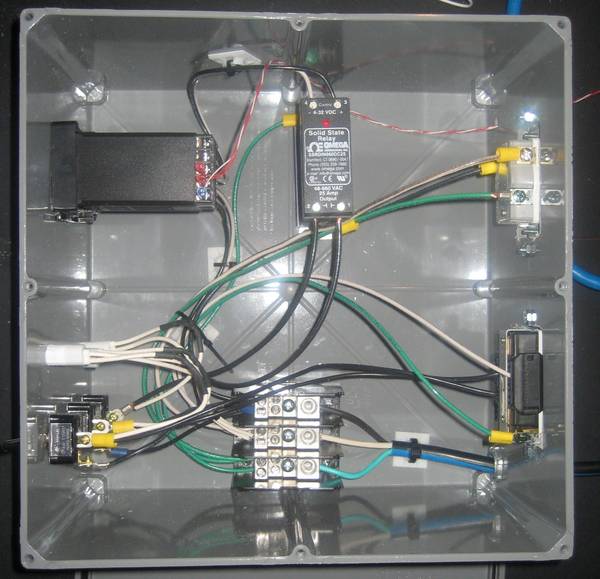 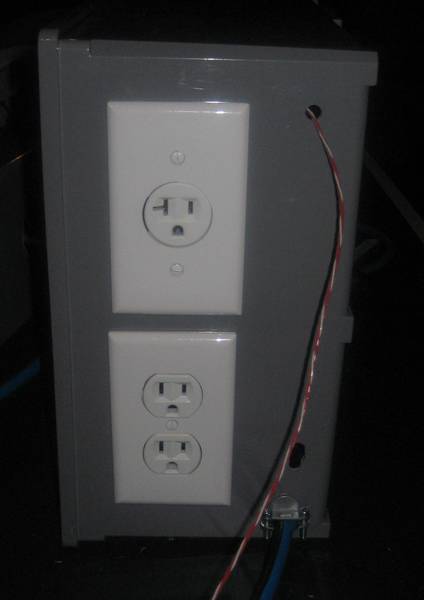 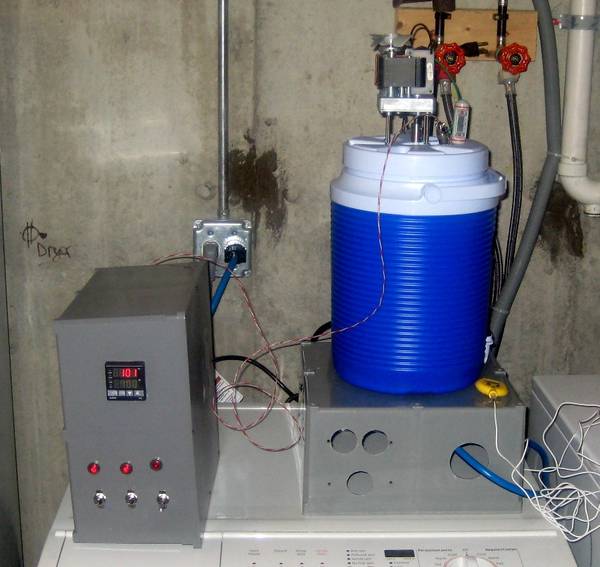 Looks like a great start, you get that gearmotor from mcmaster?

Where did you get the CRAZY idea of creating an electric HERMS? Wow... that will never work. People have always used propane, that is the ONLY way, electricity will kill you man!

yeah. those things are a fantastic find for the price. i plan on adding one to the HLT (obviously), but also another one with a turbine impeller for cooling down the wort after a boil. i'm planning on plumbing the outlet of the immersion chiller into the septic tank drain where the washing machine is. at least for me, chilling the wort is the biggest PITA part of a brew day. this'll make it much easier.

another weekend, more progress. next step will be to build some kind of frame to mount everything on so i can free up my ping pong table again.

had to replace the SS braid with a manifold: 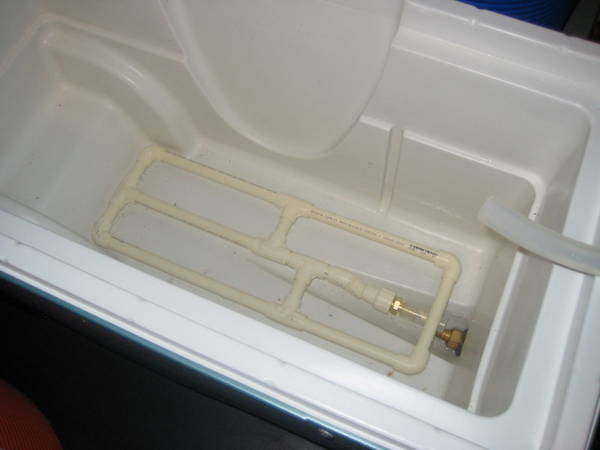 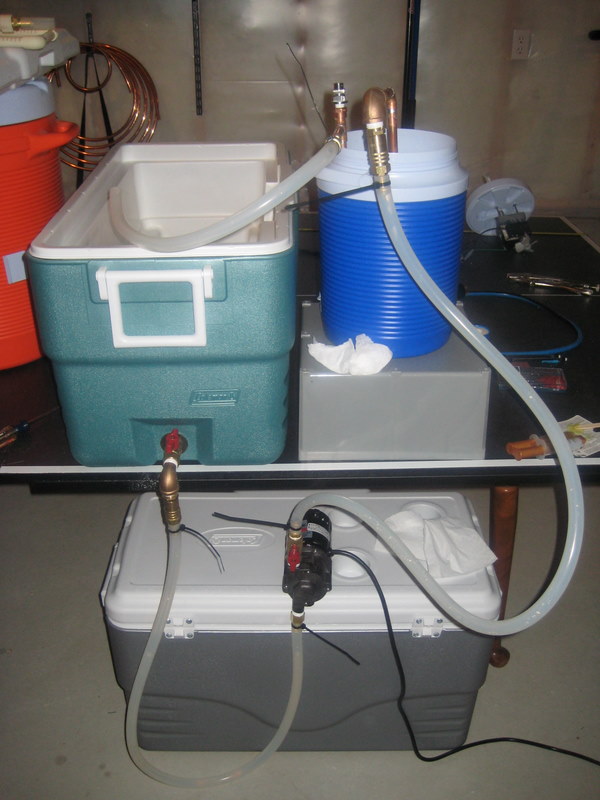 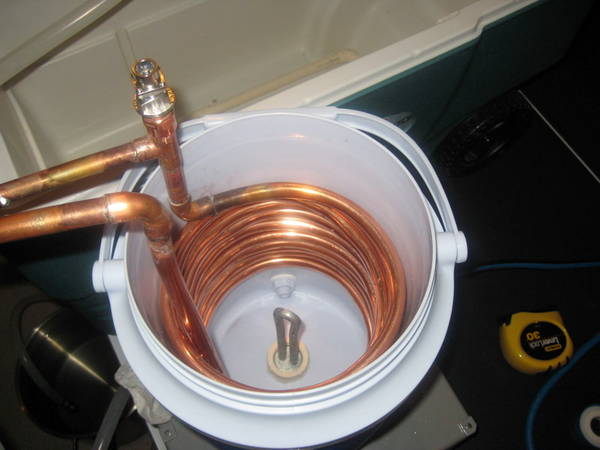 i'll probably try and add a bulkhead and valve to the heat exchange sometime soon to facilitate draining it.

can't believe i started this in march. thought for sure i'd be done already. built the brew stand. piped and mounted everything. had the electrician install 20 amp 120 V and 30 amp 240 volt GFI outlets. i still need to build the HLT control box, install the heater element in it, and put a sight glass on it. gotta work out the HEX return through the cooler lid as well. after that, i'll tackle an electric boil kettle project.

i installed a low point drain for completely draining the system (except for whatever gets trapped in the HEX coil), and also because i plan on batch sparging.

i had planned on gravity feeding from an elevated HLT to the mash tun, but decided to build an inlet manifold instead so i can use one pump for everything.

all the tubing is secured with cable ties, and tightened with one of these:

we use them in the lab to secure tubing on hose barbs. as long as you use the right size cable tie, i've never had a leak. 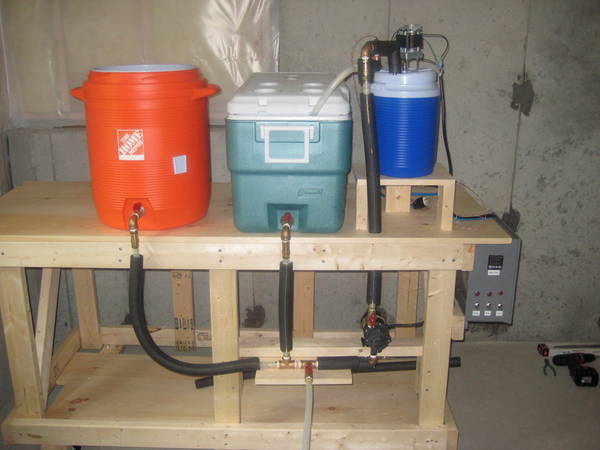 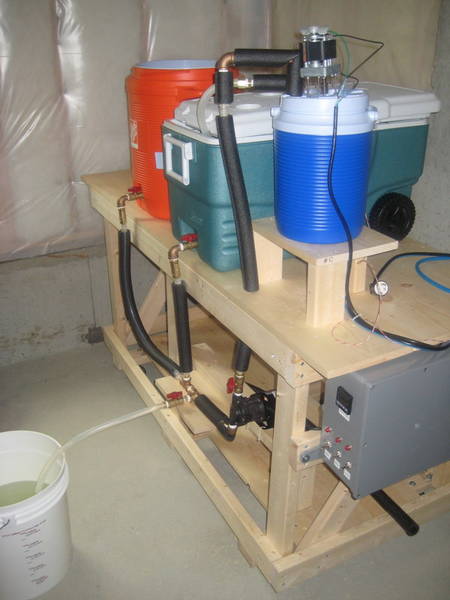 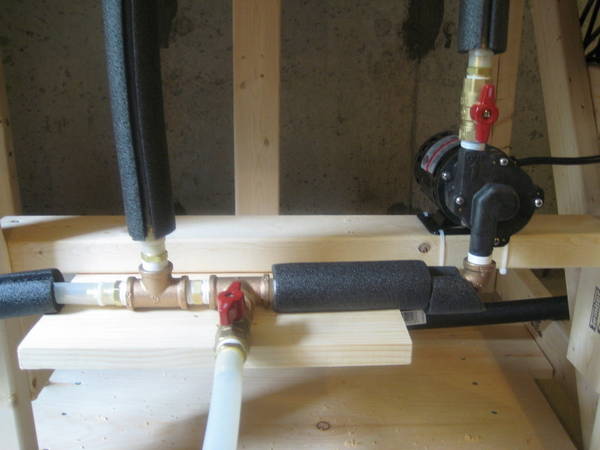 Very nice.. So this is actually a RIMS right? You're using the 2 gallon cooler as the HEX and the gott cooler is the HLT, with the rectangular being the MLT, right?

Okay, just answered my own question, saw your description just above the picture.

You have a part number on the motor?

Nice HERMS man... the motor is probably the 100 or 150 RPM AC Gear Motor from McMaster. YOU CAN pick up those motors for HALF the McMaster price as some other online stores, according to a buddy of mine.
OP
P

i forget who it was that found these, but credit goes to them.

for the HLT i'll be moving up to the 150 rpm version. post #5 has a picture of the copper coil inside the HEX. most people just use the HLT as the HEX. i decided to build a smaller dedicated HEX to have independent temperature control.

i forget who it was that found these, but credit goes to them.

for the HLT i'll be moving up to the 150 rpm version. post #5 has a picture of the copper coil inside the HEX. most people just use the HLT as the HEX. i decided to build a smaller dedicated HEX to have independent temperature control.
Click to expand...

I think I am the first to use them in a build that has been detailed in a thread on this forum... Id recommend the 150 RPM motor, but 100 will work fine.
OP
P

i'm sure this delay is pretty par for the course. after starting the upgrade in february and thinking i'd be done in 2 months, i finally ran the first brew on the new system. flipping on the HLT to pitching yeast was about 6 hours. i'm sure that'll go down once i've got a couple batches on it, plus post boil cool down took a little longer than normal. now that i'm sure my HLT is leak free, i'm gonna try Pol's approach next time and heat the night before so i'm not starting from 60* tap water. 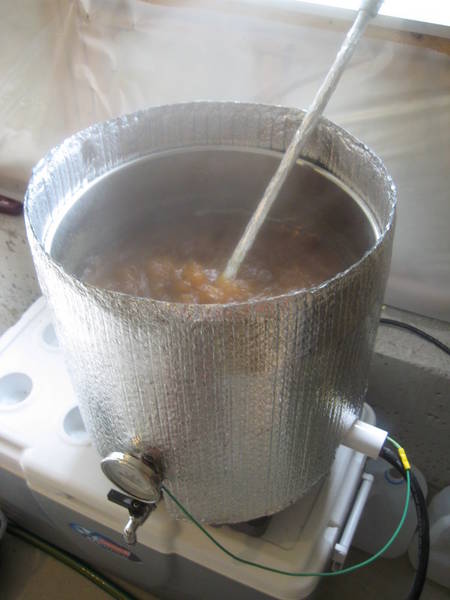 holy hell did batch sparging fly on this thing compared to my old SS braid. i also hit 80% efficiency (on the higher end of normal for me), which was a big relief. although i guess the biggest unknown was whether or not i'd lose pump prime while recirculating. not having to vorlauf was nice. definitely one of least favorite parts of my prior setup.

thanks again to everyone whose ideas i borrowed putting this together.