I posted this to the general brewing forum as well, and someone suggested I post here.

The History
I started a batch from store-bought, plain, unflavored kombucha from GT's, which is the best of all the kinds I've tried in the store. I have the Big Book of Kombucha, a wonderful resource, but as a PR person I see that the author is clearly trying to drive sales to her site. More power to her. But I got a perfectly great seeming SCOBY from a bottle of GT's, following the steps I found from the Kitchn, here: https://www.thekitchn.com/how-to-make-your-own-kombucha-scoby-cooking-lessons-from-the-kitchn-202596.

Things have been going pretty swimmingly for the last few months. I have both a continuous brew and a batch brew, both have been good. Flavor, floaty things shown in the book, all is well.

I kept the original "starter liquid" from that Kitchn recipe because it keeps making Scoby after Scoby after Scoby. It's been a machine, but seemed to slow down after about five Scobys, which I stuck in the continuous brew (aka, The Big Mouth Bubbler).

Then I go in to check on the original starter liquid, aka Scoby manufacturer, and I see this horrifying drape of ghost stuff that I can only describe as, quite literally, those Dimentors from Harry Potter.

It kind of looks like ghost poop wearing a cape and promenading into a fancy ceremony. I am afraid of it. I want to destroy it, but maybe it's food? Good-for-me food?

Do I need to bleach it, kill it, burn the house down?

Is this just yeast?

What is this stuff, and what do I do with it? Just wild microbes having a good time (and not mold). Nothing to worry about.
Relax, don't worry, have a homebrew 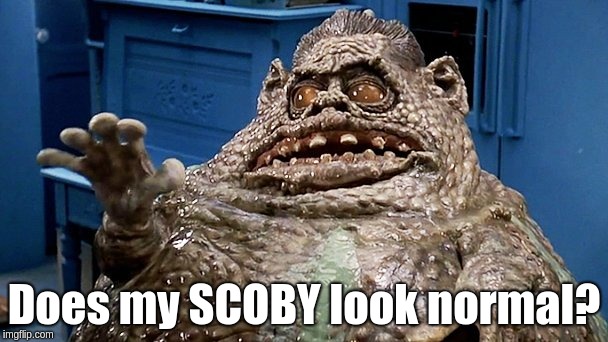 Wow, that's a real beauty! Mine are so potent that they brew a batch in two days. I scraped all the ooze off of one and gave it to a friend. It looked like a disk of tofu for a while, but now it's back to its bearded self. Both of them now only float.
You must log in or register to reply here.
Share:
Facebook Twitter Reddit Pinterest Tumblr WhatsApp Email Link

New to kombucha and scoby father