hey everyone i hope you guys can help me figure this out. i have a single Auber Pid with an Auber 40amp SSR control panel that i built using a diagram from PJ. please let me prefix everything by saying i am not an electrician and am novice at best when it come to electrical stuff. I finally got my keggles together and i went to test out the pid using some plain water and during the test it appeared that the heating elements would not kick on. In my attempt to run auto tune the Pid just kept flashing AT and the temp for a good 10 minutes. when i tried to boil in manuel mode i got nothing but i did notice the out led blink. I'm not sure if it should be blinking or if it should just stay solid because this is my first time attempting to run the pid. i checked the power to the receptacles in the back of my control box and they appear to be receiving power. in checking this i am not using a multimeter I'm just using one of those cheapo meters that you stick the two probes in and a light shines if there is power. Could it be my PID settings?

one thing that i noticed is that when i checked the connections to the elements to see if they were receiving power from the control (i am using 3 wire dryer cords) is that when i touched the two hots with the prongs i got no light i had to touch one prong to one hot and the other prong to the ground wire.

another thing that i noticed in the past is when i originally powered my pid up once the control panel was done is that the ssr light never came on.

what steps should i take to ensure everything is correct?

the diagram i used 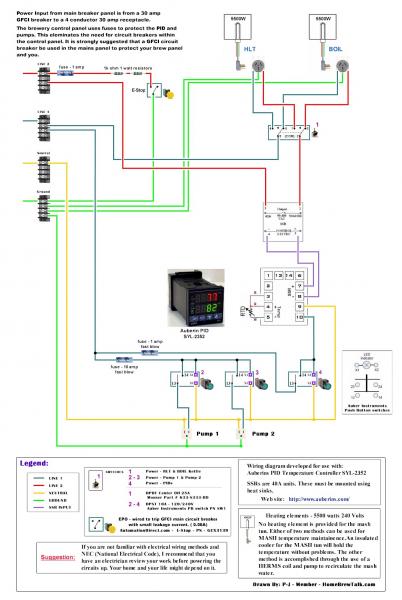 Have you used the continuity checker to make sure all of the wires were placed accurately according to the diagram?

you have a four wire hookup in the daigram, are you bonding neutral and ground in a GFCI panel or elsewhere?

Is your tester rated for 240vac?

Did you use the set button and then arrow buttons to change the manual mode percentage? If you are at 100% your out light should always be on. You should also pick up a multimeter for troubleshooting purposes.
OP
OP

NoCornOrRice said:
Have you used the continuity checker to make sure all of the wires were placed accurately according to the diagram?

you have a four wire hookup in the daigram, are you bonding neutral and ground in a GFCI panel or elsewhere?
Click to expand...

I did check the wiring but I may have not been completely thorough. I was pretty confident that the wiring was correct

l3asturd said:
Is your tester rated for 240vac?

Did you use the set button and then arrow buttons to change the manual mode percentage? If you are at 100% your out light should always be on. You should also pick up a multimeter for troubleshooting purposes.
Click to expand...

Not sure if the tester is rated for 240vac

Do my settings look correct? I don't want to open up the control panel until i rule everything else out

Testing is a bugger. Make sure every connection is tight and check them off your schematic as you go so you don't miss anything.

Start by disconnecting the SSR control signal lines and test the PID all by itself. Set the set point value to something near body temp - 85*F will do. You should see the "OUT" light flash on the front of the PID. Then warm up the RTD in your hand. As PV passes the SV (the probe is hotter than the set point temperature) the "OUT" light will stop flashing and stay off, but the PV will probably be 1-3 degrees higher than the SV at the point.

If this works well, then add your SSR control lines back in. Pay attention to the + and - for the control circuit. It matters. On the PID, terminal 7 is +. The wire from here goes to the + on the SSR. On the PID, terminal 8 is the -(negative) control line. It goes to the negative side of the SSR. Don't hook up anything to the switched side of the SSR. Do the same test and watch for the light on the SSR to flash the same as the "OUT" light on the PID. If they do then the control signal is successfully reaching the SSR. At this point you need to decide if you fried your SSR or not. In my experience, when I fried an SSR it fried CLOSED, which means it was passing current when it should not have even when the control circuit was off (light off). You need to look for this condition since you didn't tell us how you have the SSR wired other than saying you hooked it up according the diagram. Pictures would be helpful in this case.

If that works well then add a switched socket to the test. Hot line from power source to one the power in on the SSR then continue the hot line from the power out to the socket. The Neutral goes from power source to the socket directly. If you're testing with 240v the same thing applies except you're only switching one leg of the 240v. The other leg goes straight to the socket. Same thing with the ground. If you don't have a multimeter yet, use your circuit tester. It should light up the same as the SSR and OUT lights.

One thing to keep in mind if you are using a pilot light to know when you're outlet is hot - unless there's a load plugged in the pilot light will stay lit even when firing because SSR's leak voltage. Not enough amperage to worry about, but the line voltage will be present.

If any of the steps fail, then start troubleshooting at that point. This should give you confidence in the major components of the circuit.

If each leg of the 240v to ground shows 120v, then you should be ok with the power to the panel, but I'd get a quality multimeter just to make sure. You'll use it more than once. Radio Shack sells some quality ones for not too many beans. i.e. < $30.
OP
OP

Ok my gut is telling me there something going on with the ssr either wired wrong or blown.

I'm going to radio shack at lunch to play with it tonight. Any recommendations for the multimeter? Digital analog what range to get?

I have been building this system for a while now and it's getting frustrating at this point I just want to brew!!!

Don't get frustrated now. Sounds like you're close. The SSR might still be good. It takes a bit of power to blow one, but it can be done. Ask me how I know.

Just stick with it and think logically. Let your schematic guide you. Since you used one of PJ's it's a quality document. Pictures will help as well. My build thread is in my sig if that helps.

That's the exact multimeter I bought. Going to get working on the panel tonight
OP
OP

I think I just fixed it. Everyone cross your fingers I'm testing in a few mins

Give details when u get a chance

It either worked or he blowed himself up! I'm hoping he fixed it and posts the cause.
OP
OP

Ok so elements are now working and boy do I feel stupid. When I opened up the control panel I had flipped the two wires going to the ssr from the PID. If you look at the diagram I posted and used I flipped the purple coded wires between the 3 and 4 positions on the ssr

forcabrew said:
Ok so elements are now working and boy do I feel stupid. When I opened up the control panel I had flipped the two wires going to the ssr from the PID. If you look at the diagram I posted and used I flipped the purple coded wires between the 3 and 4 positions on the ssr
Click to expand...

I'm really happy that you figured it out and fixed it.

Oh.. And Thanks for considering my diagram for your set up. You have honored me. You are one of the strong reasons that I draw them. Thank you.

I am still alive. One thing happened when I tried to auto tune. I had 12 gallons of water in my HLT and my temp set at 152. At about 140 I enable the auto tune and it began flashing so I thought I was all set. After some time an the temp increasing to 170. I shut off the element and pressed the button to try to get the PID to stop flashing and A 80 came up on the screen. Not sure what was going on but tonight was a success in just getting the elements to work. Do you guys know what the A 80 means. I'll do some homework tomorrow as I am going to the Brooklyn brewery to check it out and on Sunday I'll do a proper testing.

He is an excellent business man and will help you in any way that he can.

Thanks everybody for your help