One of the beers that made me enter the hobby of brewing was a nice and fluffy Paulaner hefe-eeissbier. It was the first hefeweizen I tasted and I fell in love instantly with the style: phenolic, estery, wheaty, refreshing, bubbly… simply delicious.
Since then I tried to brew some examples of the style, using the materials I had at hand; good wheat and barley malts, good German hops and some dried yeast (WB-06). It didn’t go well. The beer was crystal clear (an accidental kristallweizen?) and the classic banana and clove were very, very subtle. Not my favorite brew. Then I tried another yeast, Lallemand’s Munich. Same results. I live in Mexico City so liquid strains were hard to find. I was really frustrated because I was brewing nice blondes, American wheats, IPA, stouts and so on, but couldn’t brew my favorite style… Until I found a guy that could bring me a good vial of White Labs bavarian weisse Yeast (WLP 380).
I was so excited that the next day after I had in my hands the vial, I brew 5 gals of weissebier. Pitched the yeast (made an overbuild to save yeast for later, just in case it was a good yeast) and waited anxiously. On bottling day, I tasted it and I was in heaven, but it is quite different to a fully carbed beer. After 8 days, I open the first bottle and I had some tears in my eyes. Nice and delicious phenols and esters in the air, with a nice haze and persistent head… I finally brewed a decent hefe!
Then I found that my supplier was selling a new yeast from Lallemand: Munich Classic. I was like “hey wait… why is there a Munich and also a Munich Classic?”. I did some research on the Lallemand’s website and found that the description was changed for Munich Yeast, and Munich Classic had what seems to be a real hefeweizen description. So, I decided it was time to do an experiment with 4 different yeasts that are meant for the style and really compare them:

2 days before, I prepared a starter for the WLP 380 yeast (3rd generation), so it was healthy and awake for the pitch. Then on brew day, I did a BIAB (Brewing in a Bag) with very classic methods. I Mashed for 75 minutes at 153 Fahrenheit. Boiled for 60 minutes and Chilled with my copper coil immersion chiller.
I separated the wort in 4 little carboys. I pitched the yeast but taking into account that for a "good hefe” one must stress the yeast.
I did it for all the samples by weighing the dried yeast (and rehydrating them) and by checking the volume of the slurry for the liquid one. I also like to create something like an “open fermentor” so I just put a foil over the mouth of each sample, no airlocks this time. All where fermenting 12 hours after the pitch, except the one with the Classic Munich; but it caught up the other ones 4 hours later. 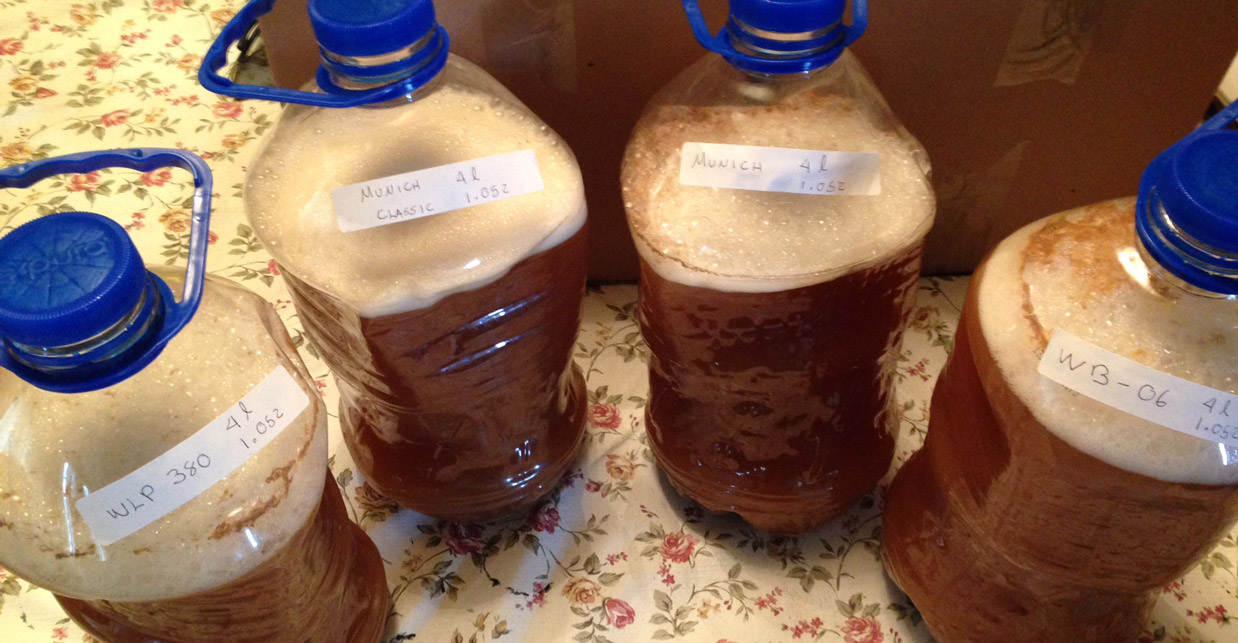 I waited 2 weeks for them to be fully attenuated and checked that the fermentation was over. They stayed in a room where the temperature doesn’t come below 72 °F. The odors, during fermentation, were different:
Does the aroma indicate that in each of the samples I will find the banana, clove or sulfur respectively?
After fermentation was over and it was time to bottle them (3.0 vols of CO2) 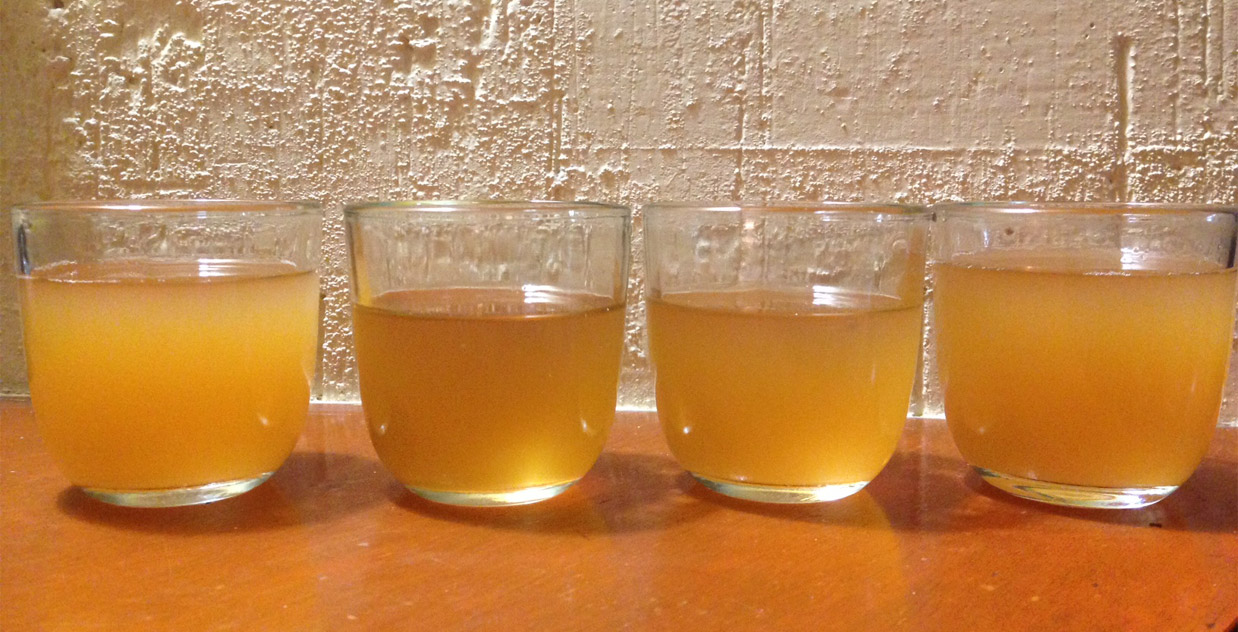 WB-06 / Munich / Munich Classic /WLP 380 respectively
After 2 weeks in the bottle, it was time to do a nice comparison like the pros: Aroma, Appearance, and Flavor. These are the results: 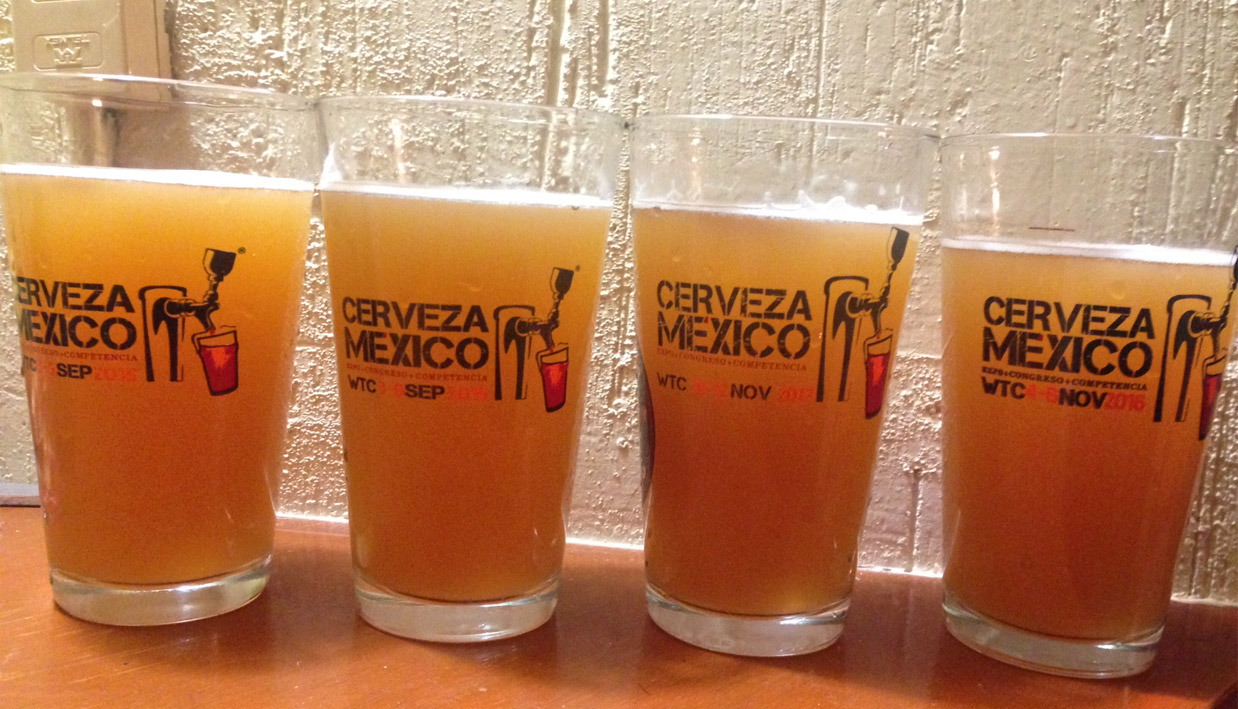 Aroma: A little fruitiness but not resembling banana nor bubblegum. Almost no clove, with a lot of yeasty, bready aroma.
Appearance: Quite hazy with a nice pale orange color, a head that was big at the beginning but disappeared after a minute.
Flavor: tart, a little fruity but not feeling the banana nor the clove, which are critical for the style. Not bitter just enough to balance the malts. Bready and grainy flavor with a silky mouthfeel, effervescent and dry finish, not sweet.

Aroma: Quite neutral, like using an American strain. Bready, and yeasty aroma.
Appearance: Quite hazy with a nice pale orange color, a head that was big at the beginning but disappeared after a minute. Very similar to the Fermentis sample.
Flavor: A little tart, but overall very neutral with a very bold yeast and bready flavor. Banana and clove are nonexistent. Dry finish, not sweet.

Aroma: Somehow sweet, banana and a little clove. These aromas disguise more the bready touch of the beer.
Appearance: Same than the other samples, hazy and pale orange with more retention.
Flavor: A little tart, not bitter, with some banana and some clove in there (more banana than clove). Esters and phenols are present and melt nicely with the grain bill, but somehow muted. Dry finish, not sweet at all.

Aroma: A lot of cloves, some apricot and a little sulfury note that disappeared after some minutes. Phenols cover the majority of the maltiness.
Appearance: Same than Munich Classic, good head retention, hazy and pale orange.
Flavor: Not tart at all, not bitter, not sweet, a lot of cloves, banana is minimal. Apricot is another note that lingers. Dry finish, silky mouthfeel and effervescent.

This is quite shocking because the wort was exactly the same, treated the same way, and the beers were totally different. You can find the following text in the respective websites of the brands:
Fermentis WB-06: A specialty yeast selected for wheat beer fermentations. The yeast produces subtle estery and phenol flavor notes typical of wheat beers. The choice of wheat or weizenbier fans.
Lallemand Munich: Munich Wheat Beer yeast originated in Bavaria, German and is a neutral strain which can be used to produce a wide variety of wheat-based beer styles. With only slight esters and phenol production, Munich’s allows brewers to showcase other spice additions. Traditional styles brewed with this yeast include but are not limited to American wheat, Belgian white, berliner weiss, gose, hefeweizen, dunkelweis, and weizenbock.
Lallemand Munich Classic: Munich Classic is a Bavarian wheat beer strain that can easily express the spicy and estery aroma profile typical to German wheat beer styles. This strain is simple to use over a wide range of recipe variations and fermentation conditions, making it a great choice for a number of traditional styles of wheat beer. In classic open fermentation vessels, the yeast can be skimmed off the top in the traditional manner. Styles brewed with Munich Classic include but are not limited to weizen/weissbier, dunkelweizen, and weizenbock.
White Lab’s WLP 380: High phenolic clove aroma and flavor, with minimal banana. Also produces refreshing citrus and apricot notes for a crisp, drinkable hefeweizen. Less flocculant than WLP300 and sulfur production is higher.
After tasting the samples and reading the description, I can say they are true, but not so much for the styles they are saying are suitable for. A hefeweizen is a yeast forward style with a solid malt backbone. I think that the Fermentis and Lallemand’s yeast does not have enough character for this style and create a quaffable wheat beer, but not a hefeweizen. In contrast, White Labs yeast create a nice mélange of phenols and malt components that approach very well the hefeweizen characteristics. My favorite of the 4 is, without a doubt, the WLP 380. There are a lot of forums and chats talking about some very specific temperature control, ones ramping each day to achieve an estery and phenolic profile from the Fermentis and Lallemand’s yeast. It can be true that with a more temperature focused process one can suck off the banana and clove of that yeast, but for this practical case where the fermentor is just sitting at 72 °F all the time, the yeast creating a very nice Hefe is White Labs.


Want to Read More About Experiments? Check Out This Article » 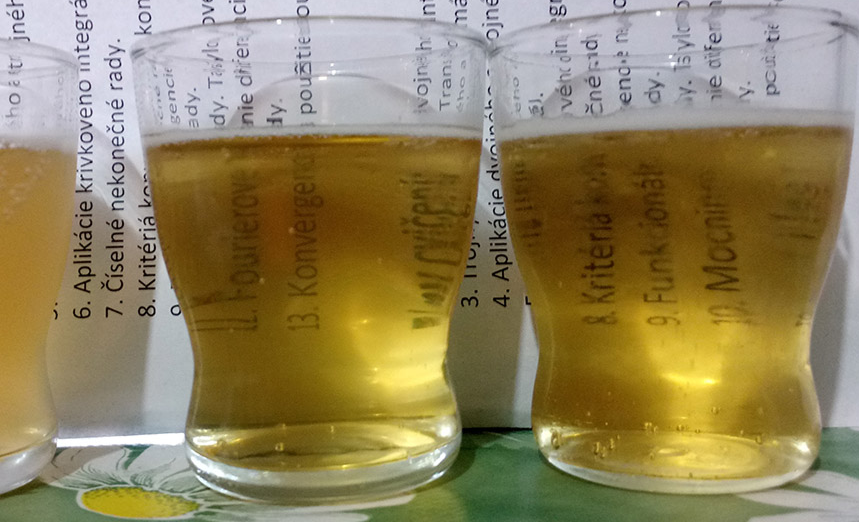 One of the very common rumors is that you mustn’t boil your gelatin solution (that many of us use as a clearing agent), because you DENATURE the proteins present and it no longer does its job. However, as everybody knows, it is a good idea to sanitize everything that touches the beer in its cold stage, so being able to boil the gelatin would really be convenient. This is the reason for me publishing this article, to bring (what seems to be) true to the masses.