Grapefruit Bomb IPA, how much zest?

Had some Grapefruit Sculpin IPA the other day. Wife said, "make something like that!"

Was scraping together leftovers for a "garbage can IPA" today, when a Brazilian co-worker walked into the lab, said "Bom Dia" ("Good Day")and gave me 5 grapefruits, fresh off the tree. Karma?

And how about "Bom Dia" for the name of a grapefruit "bomb" IPA?

Question: How much zest to use (that is, how many of the 5 grapefruits) in a 5.5gal batch?

If it helps, here's the recipe I've put together based on what I've got sitting around. I'm thinking I want more body, less bitterness from hops, and more residual sweetness than than I'd typically do in an IPA, to offset the bitter note I expect from the zest:

He said zest from 4 was a little underwhelming. I made a white IPA that had the zest of 2 dozen lemons that was well-received, if that's any help.
N

When in the process do you add the zest? I recently had a grapefruit sculpin and it tasted amazingly fresh. I think I would add them to secondary for a dry hop and get the bitterness from the hops?

I do a fruit beer (multiple gold medals) that has grapefruit and lime zest in it. 1 grapefruit + 4 limes AND the juice of both is plenty for 10 gallons if you use a complimentary hop and add at the right time.

Zest goes in at flameout (use a hop spider or bag) and do a 10 min stand with it.

Juice goes in once primary fermentation is 2/3 done... so like day 3, yeast depending of course.
OP
A

butterpants said:
I do a fruit beer (multiple gold medals) that has grapefruit and lime zest in it. 1 grapefruit + 4 limes AND the juice of both is plenty for 10 gallons if you use a complimentary hop and add at the right time.

Zest goes in at flameout (use a hop spider or bag) and do a 10 min stand with it.

Juice goes in once primary fermentation is 2/3 done... so like day 3, yeast depending of course.
Click to expand...

Zest definitely going in at flameout for sanitation reasons.

As for the juice, I've read conflicting things about fermenting citrus juices in the beer. But I might do it, it was going to be a garbage can IPA anyway. I was maybe thinking of adding that at flameout also for ease and for sanitation reasons, but if I was going to add it as you do, do you pasteurize that juice first?

Many opinions on the total amount of fruit to use, I'm thinking I'll go ahead and use all 5 of them.

I don't like adding the juice to the very beginning of fermentation due to possble pH effects. You can flash pasturize it if your OCD needs it but if your juicing is sanitary and you keep it refrigerated, should be fine. It's an IPA so I'm assuming you have plans to drink it fresh? Even if a few bugs or wild yeast got in, I doubt you'd notice it. Different story if you're planning to cellar it. I'd use a commercially prepared and pasturized juice product then. The zest is a non contamination issue as it's being sanatized by the wort.
OP
A

Brewed over the weekend, and in case anyone's following this...

I wound up using the zest and juice from 3 good-sized grapefruits. After straining out pulp, that was ~500mL of juice. All that added at flameout. pH just before pitch was 4.8, actually higher than I expected (these fruits maybe not as acidic as I expected, we did get an unusually high amount of rain the last couple months).

Oxygenated wort and pitched 1L starter of S-04 (~250B cells as per Brewer's Friend) at 63F / 17.2C, and next morning (16 hrs later) was chugging away nicely, with a distinct grapefruit aroma from the airlock. So far looks like the acidity from the fruit juice did not hamper the yeast in any way.

where did you score 25% food grade phosphoric acid from?
OP
A

Thought I'd update again, in case anyone's following this.

Brew day was 1/25/2015. OG was 1.070. Forgot to mention before, but mash temp was 154°F, a little higher than target. The zest and strained juice (~500mL or 2 cups) of 3 good-sized grapefruits were added at flameout. Initial ferm temp 63°F. Oxygenated and pitched 1L starter of S-04, and visible ferm began within about 4 hours, strongly chugging away by next morning.

2/26 (tonght) going to crack one I fridged last night. Will report on level of grapefruitiness.
S

Id luv to hear how it turned out, this sounds like something i would love to drink
OP
A

The color on this is very nice, and the malt backbone is very pleasing. It is a little "sweet" perhaps with all the C40, but I think that works nicely with the grapefruit. For ease, if I was to make this again I'd probably replace the 1# of home-toasted 2-row with 1# Victory.

The CTZ and Citra I think blended very nicely with the grapefruit, the Ahtanum could just as easily have been Cascade (cheaper). The extra Simcoe in the dry hop was a very nice choice I think, helped keep this from being too one-dimensionally "fruity." In future I would up the dry hop, probably 1 or 2 more oz Simcoe.

As for the grapefruit level: zest and juice of 3 grapefruits is definitely noticeable, but surely less than I wanted. Next time I'd probably go with 5. Interestingly I think with only 1 or 2 of them there'd be a note that would harmonize well with typical American hops without shouting "I have added grapefruit."

Clarity is not that great, but more time in bottle (and then time in fridge) will probably help that. 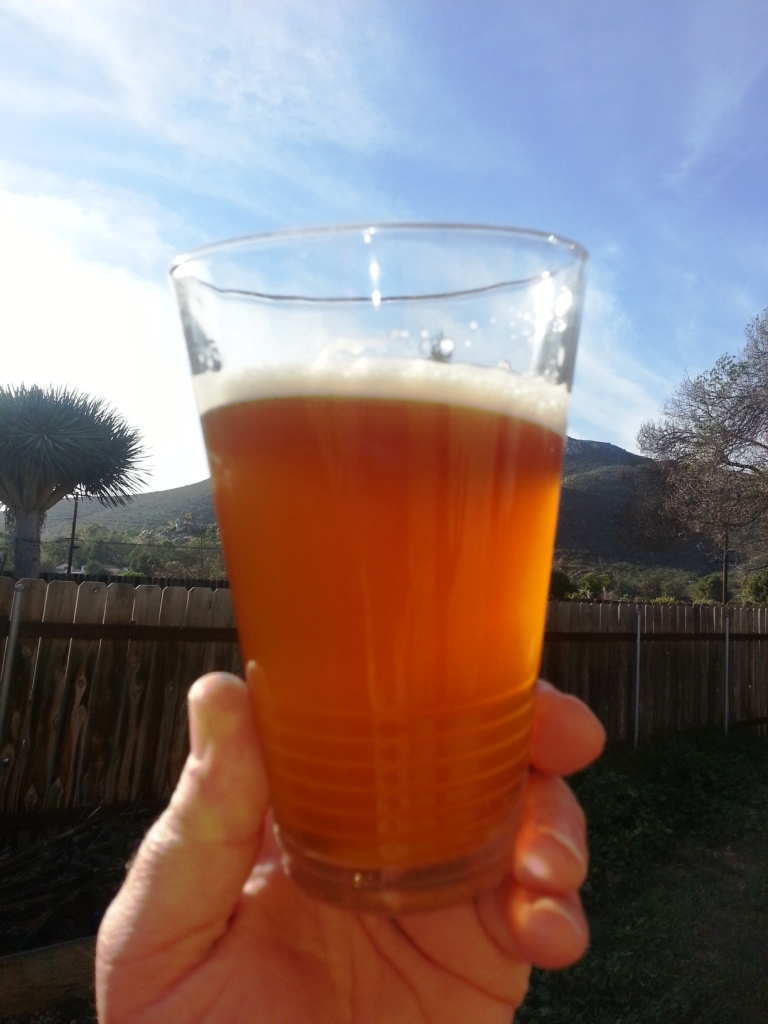 A few weeks in the bottle cleared this up nicely. Still needs more grapefruit and simcoe (next time!) 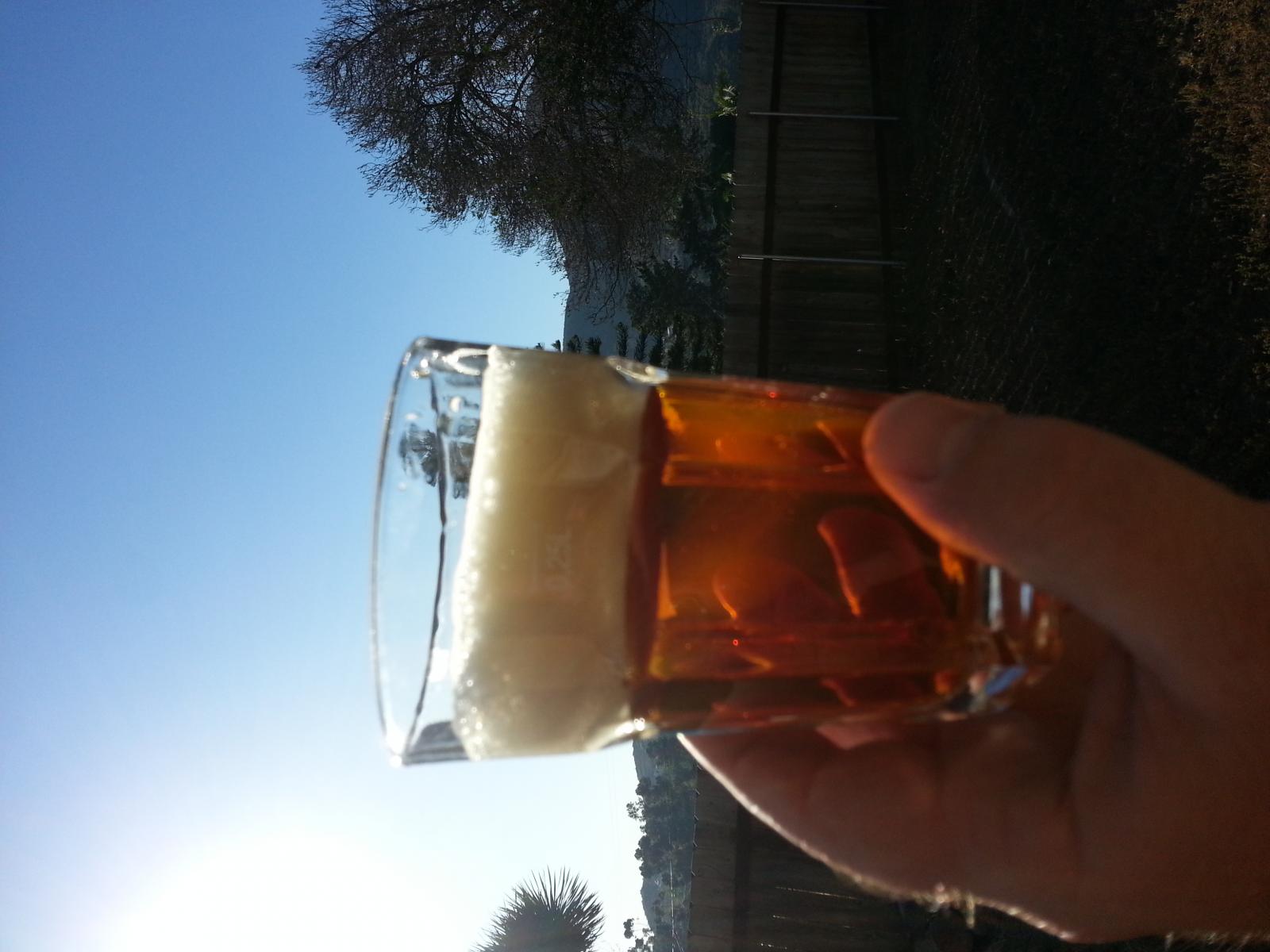 Try making a tea w/ grapefruit zest and add at bottling/kegging time. You can adjust the flavor more easily.
J

I brewed something based on this recently, it came out pretty good. The grapefruit comes through quite nicely. Color is a little dark due to the Crystal 60, but it is what I had.

for 5.5 gallons into the fermenter

How much tangerine zest?

How much zest? (AG Hefe)

T
Adding orange peel/zest and coriander. How much?