My freakin laptop is dead mother board laying my dresser and I am now starting to lose it. The only time I can get on HBT is at school and thats a PITA. I miss being able to acess HBT anytime I want. (insert sad smiley here)

You mentioned school - are you still in college? If so, isn't that what parents are for?

Hit up mom and dad to get that thing fixed or better yet, get you a new one.

If that won't work, you could always start pimping on the side.
OP
OP

Ya Im still in college. Going for Urban PLanning and Development basically. Im in Remote Sensing and Photography right now. No possiblt change of hitting up the parents. Paying for school on my own. Guess the New York State education system can help me wiht my brewing.

You can get educational discounts from both Apple and Dell..... might be time to spring for a new one with a good warranty, so that next time the board dies you can have it replaced?

I'm a huge believer in warranties. They are your best friend.

How adventurous are you?

Call the campus help desk and ask them to connect you with the Linux club. Those guys (and rarely, gals) are willing to help people use and learn GNU/Linux, even to the point of being able to lend you a laptop. You won't be playing any games on the sucker but HBT won't be an issue.

Of course, this sometimes doesn't work, depends on how passionate the guys there are, but all they can do is say no... and maybe laugh a bit.

PS: This was the last Windows computer I owned... 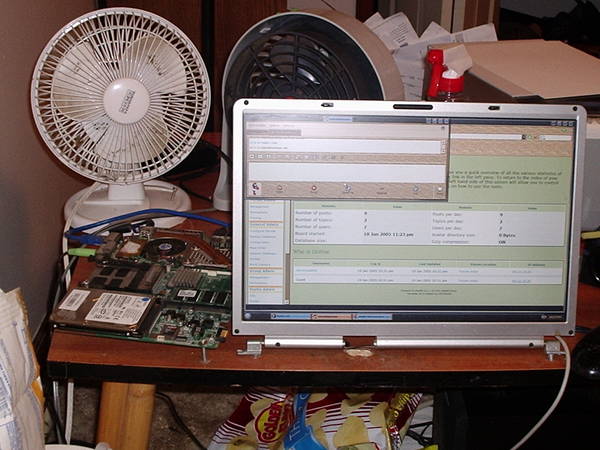 I've done screen replacements on Dell XPS 17" laptops .... 3 or 4 times now..... they're actually fairly easy to perform, but difficult to perform without a VERY large workspace to lay all the parts out on. Otherwise, you need 4 hands instead of 2.

Formerly an eMachines. I think it had a whopping 1.8 ghz processor and a "massive" 256 MB of RAM.

Of everything pictured there, the hard drive lasted the longest. The irony of that did not escape unnoticed.

OK, I recognize the latches now. My bad, here I was trying to show off.

Hard drive looks like it was either a Fujitsu or Toshiba. Those don't look like WD/Max/Sea markings. So, ultimately, I agree. The hard drive "should" have died long before these other parts.

I'm assuming that's not a media storage server (no music or movies or ROMs) so that's probably backing up your taxes, complaint letters to the phone company and maybe some digital photos. In that case, you're golden with those specs actually. That laptop wasn't a fileserver or a router, it was a full fledged "desktop replacement". Yet more irony, the reason I originally deshelled it wasn't because it was too "slow' - the opposite. It was too fast! I was playing Anarchy Online betas and after about 20 minutes the thing would just die, no warning. It wouldn't power back on for another half hour and when I finally called Gateway (eMachine are budget Gateway systems and Gateway isn't exactly creme de la creme) they said it's a safety mechanism to prevent the board from frying itself. So I deshelled it and put fans behind it for increased cooling since the graphics card was producing more heat than the case's fans could dissipate.

Close but no cigar. Hitachi. Honestly, I've been blown away by Hitachi stuff including that drive. I would personally rank HItachi much higher on the "reliablity" ladder than Western Digital or Maxtor since 2/3 of all my WD drives fail within 3 years and I've never had a Hitachi fail in under 5. Historically Maxtor was "trailing" but recent Maxtors are just economy Seagate since the merger.

Define pathetic. My second-to-last home workstation was a quad core AMD Opteron 2214 system with 16GB of Ram and an nVidia 7600GT PCIe video card. I traded it in for a dual core Intel Core 2 Duo with 4GB of Ram and integrated video for one reason and one reason alone - Intel video chipsets run on Free Software where no other chipsets do. Everyone has their values and needs and it's not my place to compare them to my own.

My wife currently runs an AMD Sempron 2800+ with an nVidia 5200FX card with 128MB of RAM. The board has 768 megs of RAM and the thing is slower than dirt (IMO). We MAY be bringing a Dell into the home since they now sell GNU/Linux on their system and we don't have to pay the Windows tax.

Kevin Dean said:
I'm assuming that's not a media storage server (no music or movies or ROMs) so that's probably backing up your taxes, complaint letters to the phone company and maybe some digital photos. In that case, you're golden with those specs actually.
Click to expand...

Nope. Those files just go on my external LaCie 320gb (Seagate inside). This is for streaming MP3/AVI via wired to a Netgear router (Was Linksys, next one will be Linksys again), then by wireless to a laptop in the other room. For watching movies/music on my home theatre.
When I finally have to return my work laptop, I'll just move the file server to the theatre, and run a long Cat 5 cable.


Kevin Dean said:
Close but no cigar. Hitachi. Honestly, I've been blown away by Hitachi stuff including that drive. I would personally rank HItachi much higher on the "reliablity" ladder than Western Digital or Maxtor since 2/3 of all my WD drives fail within 3 years and I've never had a Hitachi fail in under 5. Historically Maxtor was "trailing" but recent Maxtors are just economy Seagate since the merger.
Click to expand...

Ditto on all that - EXCEPT. I don't trust Maxtor, and I haven't for many many years. I lost 4 Maxtor 20gb's within 12 months on my old Duron 700mhz. Seagate is my usual go-to. WD is my 2nd choice, but my taste for them is soured now that my 2-yo 160gb WD is failing in my desktop. Not personally a Hitachi "fan", but I have no averse reactions to them, as I do to Fujitsi/Toshiba drives.

Pathetic = Isn't it pathetic I'm wasting these parts to sit there and store all my TV shows?

I've never even seen an Opteron system. You will now be my nemesis.

Nah, just kidding. But seriously. If I am ever on the coast, I think we need to drink a few and nerd out. I've been brainwashed by Microsoft too badly, I need to be reminded that alternatives exist. My roommate tried to get me into Ubuntu, but it just wasn't workin' for me. Didn't feel "it" with Fedora Core 2 either. Maybe I should try OS X again. I miss that shiz.
OP
OP

I started learning a LITTLE linux on my own with some guidance from a casual user. But I had trouble connecting to my verizon wireless network with ubuntu. I wouldnt mind a little guidance. Ill also looking into those discounts. I just dont want to say goodbye to my Pent 4 3.2 Ghz processor and 17 inch wide screen.

chriso said:
I've never even seen an Opteron system. You will now be my nemesis.
Click to expand...

The point was that pathetic is relative. I do a lot of compiling so I need multiple cores and at the time the octocore AMD's weren't out. I also do quite a bit of virtualization and that eats memory in (for how I used it) 2 GB chunks per instance.

I could, and had, brought that machine to a screeching halt given all of the things I used it for. Despite the specs, it SUCKED as a gaming rig because it wasn't built with latency in mind.

That machine is now in a datacenter handling e-mail traffic for my company (sold it to them) and doing it well.


BuffaloSabresBrewer said:
I started learning a LITTLE linux on my own with some guidance from a casual user.
Click to expand...

I muddled through it for the first few days and was rather pissed. I was downloading those deb files and couldn't get the installer working (he he, silly me - I tried clicking on the files), had no idea how to find things... Of course, this was "back in the day" (which now, means pre-Ubuntu). I found the IRC communities surrounding each of the distros and fell in love. If you feel like giving it a go again, grab an IRC client (I suggest Chatzilla) and join the Freenode network.


BuffaloSabresBrewer said:
But I had trouble connecting to my verizon wireless network with ubuntu.
Click to expand...

I personally think Ubuntu sucks. I am constantly blown away by how much acclaim Ubuntu gets. I half-respect that Ubuntu recognizes and strives to support the Free Software ideals and community but aside from that, I see nothing spectacular about it. Honestly speaking, most people trying Ubuntu for the first time are coming over from Windows or MAYBE Mac and in either case they are using hardware that is often built around WIndows or Mac. This means, more often than not, they have hardware designed to restrict the user into a binary-only world so that they have no control. This means things like most integrated Wifi drivers simply DON'T work using only Free Software. I urge everyone to boycott companies that think it's okay to do that, but for those who can't there ARE distros that handle them MUCH better than Ubuntu does. Sidux, for instance, or SimplyMepis. Linux Mint also is gaining popularity. On the RPM driven side you've got PCLOS and Suse. Fedora and Debian and Ubuntu all have commitments to Free Software and so will NOT have most of those things work "out of the box" and it's wrong to expect them to. Unfortunately, many people in the Ubuntu crowd are so enamored with it that they suggest it without realizing that and turn a LOT of people off.


chriso said:
I don't trust Maxtor, and I haven't for many many years
Click to expand...

Perhaps it wasn't clear, but that was my point too. 5 years ago, Maxtor sucked. TODAY, Maxtor drives are Seagate drives that are no longer cutting edge. Seagate-Maxtor uses the Seagate brand to push "cutting edge" drives and sells "regular" drives under the Maxtor brand. I still use Seagate myself but I wouldn't avoid Maxtor based on experiences five years ago because there have been signifigant changes since. Until recently, I also had horrific experiences with WD but my last few have been stellar, even threatening Seagate.