***********1. Enforce rules only against their foes (i.e., anyone who does not suck up to them) while exempting their friends from similar or worse behavior.

2. Silently boot someone and then proceed to trash talk the person as if the person was still there with an opportunity to respond.

3. Boot someone and then start a thread for the sole purpose of boasting about having removed the person, so as to bask in the praise of sychophantic members applauding the moderator's bold action.

4. If a person is being stalked or trolled, scold, warn and threaten both the victim and the perpetrator to stop it. If the victim protests, boot the victim for having defied the moderator's authority. Add injury to insult by allowing the troll or stalker to stay because the stalker or troll didn't talk back to the moderator.

5. If the moderator loses an argument to another member, selectively delete the member's comments so that the thread no longer makes any sense.

6. Selectively enforce the tribe's rules only against newcomers, newbies or people who are not friend with the moderator.

7. Speak about their actions as moderator in the passive voice, use the royal we, and otherwise take on a haughty, authoritarian tone. I mean, dude, you're just a moderator. ***************

How long is many years? I've had mine for almost 5 years and hope they never break after hearing some of the horror stories. There was one in Zymurgy recently about a guy who was carrying it while full to set it up for bottling. He bumped into something and it almost cut his hand off at the wrist, only hung on by tendons. They reattached it but I'm pretty sure he can't use a couple fingers.

I've had my fair share of "bumps" but luckily no breaks yet. I love the glass but will be buying PET in the future since it's just not worth the risk to me.

I just got home to realize I forgot and left my carboy full and soaking in oxyclean outside since last Sat. It froze the other night, now a goner. I won't buy another glass one (not it's fault, mine) just to be on the safe side.

You could take up basket weaving and make a cover for it.

You are on to something there. Could be a market for such a basket.
R

I read those other horror stories before. Made me want to use better bottles instead of carboys. Now I'm thinking more about fermenting in kegs..

I hadn't thought about the possibility of a carboy just breaking?????

I have begun to carry my full carboy in a square plastic milk crate. The carboy fits inside with some room left over so I can easily grab onto the built in handles. It makes it much easier to carry and, hopefully, provides some protection to the carboy.
L

Out of laziness, I use brew buckets for primary fermentation and a corny keg for secondary just cause they are easier to clean. My carboys just sit and collect dust.
However, I used to use them for primary fermentation and remember picking them up, full of wort, while they are wet and somewhat slippery from sanitizer and shaking them to aerate my wort. Probably not the smartest thing I have done and I am glad I didn't drop one.

If you actually do build a box and fill with expanding foam, be very careful how much as it creates a lot of pressure that may breack the glass. In addition, the insulating effects may lead extra heat during fernetation.

+1 on the Chianti basket idea. 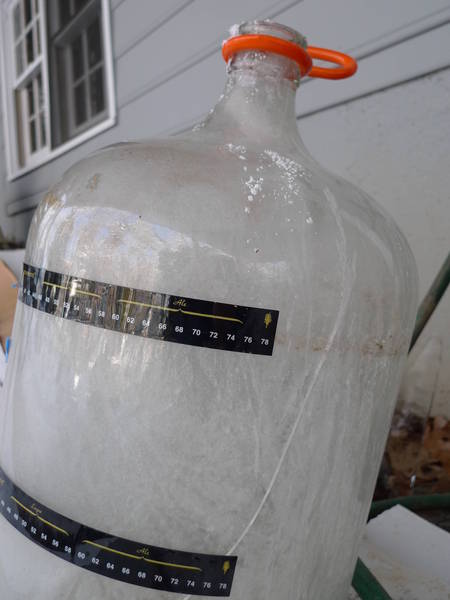 Here's a pic of mine, frozen and cracked.
M

Chianti basket is a great idea.

I use a brew hauler with my glass carboys, works great.

I admit, if I change from glass, I'm getting a conical. I don't care what Better Bottles are made of, SWMBO doesn't like plastic products and I'll respect that.
OP

BillyBroas said:
How long is many years?
Click to expand...

I started brewing in glass carboys in 1983. Got 'em free or cheap at yard sales.


There was one in Zymurgy recently about a guy who was carrying it while full to set it up for bottling. He bumped into something and it almost cut his hand off at the wrist, only hung on by tendons. They reattached it but I'm pretty sure he can't use a couple fingers.
Click to expand...

And before that happened he was golden.
Glass is a funny material. It can (at significant expense) be made to break in zillions of tiny pebbles with few if any sharp edges. It can be laminated with plastic. But no one does any of that to glass carboys. Glass is loaded with internal stresses. they can com out all at once out of nowhere or they can require a couple little bumps to liberate the stress with the carboy just fracturing in too.

All that weight in a falling rolling slicing power curve is nothing to sniff at.

Cheapest easiest option:
Wrap glass carboys in a couple layers of metal porch screening that one can get cheaply from the BORG ( they sell rolls of the stuff) and tape it together for a very cost efficient safety measure. I'd use a few vertical strips of foam core double sticky between the glass and screen to make sure the carboy couldn't twist like a ball in a sock. But that would go a very long way to preventing the horror story scenario.

I've had my fair share of "bumps" but luckily no breaks yet. I love the glass but will be buying PET in the future since it's just not worth the risk to me.
Click to expand...

I hear ya. The older I get the more I realize that those carboys only need one bad moment to undo all the value I ever got from them and then some.

Those PET carboys don't exchange oxygen enough to matter. And they have a zero flavor component.

I have six glass carboys and have never broken one. I keep them in square milk crates with handles and am very careful on handling all of them.

What do I win? Just kidding.

I bought all but one of my carboys from the same homebrew store. Supposedly they are imported from Italy and are higher quality. I was told by one of the store employees that they've never heard of one of the carboys they sell breaking spontaneously.
R

I have four of the glass carboys from Italy they were labeled fragile, but pronounced "fra-jee-lee".

So far I am lucky not to have a spontaneous rapid dissassembly.

I had one upside down on the counter draining and it fell over, rolled off the counter and came to rest against the wall. It made a lot of noise but is still intact.

Another, I chipped the outside of the mouth while inverting for draining. I can no longer use a carboy cap with it but, it still works great with a universal stopper.