So you’ve started brewing gluten-free. I commend you. For us glutards (those with intolerance and allergies to gluten), there are basically two options: 1) Make a regular beer, and then take the gluten out with WLN4000: Clarity Ferm, or 2) Brew using no gluten-carrying grains in the mash. As I’ve found, even with Stone Delicious IPA, there’s not much added benefit from option 1. I’ll still have some brain fog, indigestion, or sore joints the next day, which really takes the session-ability away from it being gluten-reduced. Furthermore, they’re not doing anything adventurous, just offering basic flavors, making you have to either travel to places like Alpine, Duckfoot, or Amplified Ales in San Diego (gluten reduced), Ghostfish in Seattle (all gluten free), Groundbreaker in Portland (all gluten free), or Glutenberg in Canada (all gluten free), basically making homebrewing the best way to get the flavors you want. 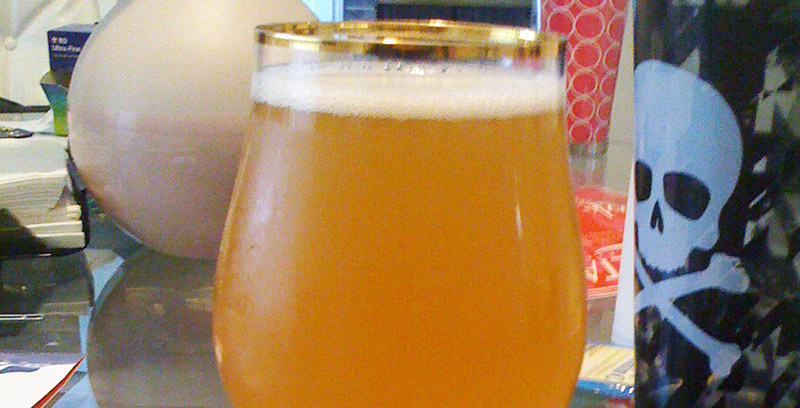 Without fail, all gluten-free beer seems to always lack that mouthfeel present in regular gluten-carrying beers. Why is this? Well, since any single gluten-free grain has about ½ of the yeast nutrient as Pilsner malt, you must add a cocktail of various gluten-free grains to ensure that the yeast will even attenuate (i.e., millet tops out at about 63% whereas barley tops out at 88%). In my experience, when the sugar content is right and you’ve added yeast nutrient to your wort, there will be high attenuation because of sugar content in the grains. But because of a lack of extra indigestible material, there is a tremendous amount of body left out. Remember that only 2/3 of the carbohydrates in a typical wort are fermentable. There aren’t a lot of extra starches and proteins lying around, so most gluten-free beers taste like a light beer. This is incredibly convenient when brewing pale ales, IPAs, alt-biers, and lagers; not so much when brewing Belgians, stouts, and saisons.


But There is Hope!

The best-tasting brews that I’ve done up to this point have incorporated at least three different gluten-free grains, and all have used adjuncts to get more body. What are these grains? Millet, buckwheat, rice, sorghum, corn, and quinoa. Rice and sorghum are typically my main fermentables, and buckwheat and millet are my additional periphery grains. I do this because of cost and attenuation and to make sure I don’t create too much stuck mash. More about that later. Even more on the periphery, one of the better alternative fermentable beers I’ve had was a Japanese lager that used an all sweet potato mash. You can also use amaranth and buckwheat groats, but some might find this costly or excessive.
One additional grain that I’ve been adding more recently in 30% of the grain bill and below is spelt. This is the ancestor of modern day wheat, with a high protein content but low gluten content, and it comes malted. This really helps keep my overall grain bill financially manageable. Spelt also has a great nutty/earthy taste that people prefer in any longer-fermenting beer. It really helped with a Trappist style ale I made recently, but has good versatility. It paired incredibly well with my most recent coffee IPA. And a disclaimer here: I will still use Clarity Ferm when using spelt. There is still a gluten content, but the sessionability is much greater, and I’ve experienced no side effects up to this point. As additional help with body, flaked corn, flaked quinoa, and oats are great additions to your mash. For those of you using Brett yeasts, Brett also loves rice syrup solids, rice milk powder, and maltodextrin. It also helps any beer you make get more of that “chewiness” that people desire in their beer. 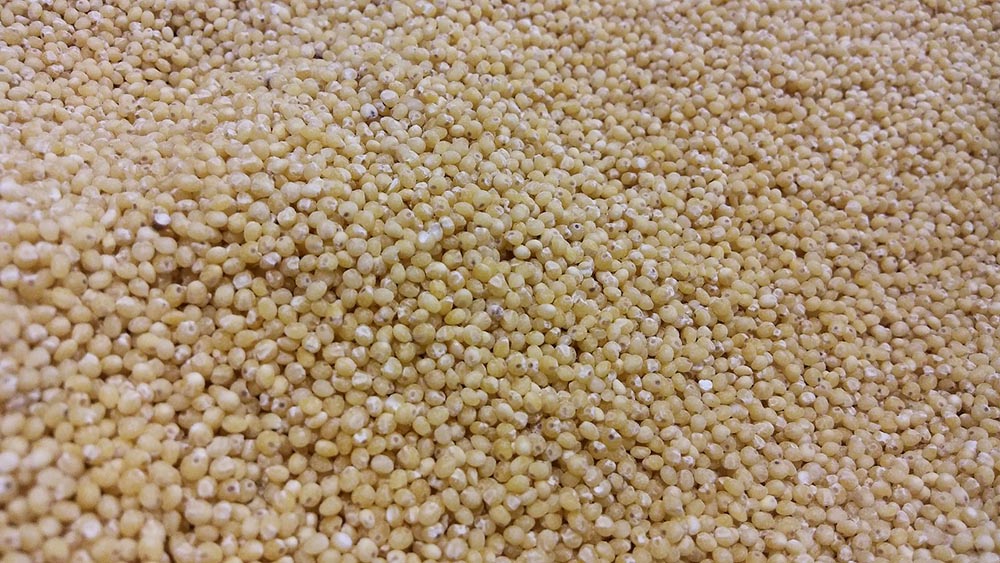 Besides rice, all of these grains are smaller than their gluten carrying cousins. I’ve only been able to find sorghum in extract form, but it’s about the size of Buckwheat. Although small, these grains behave very much like oats, and stuck mash is a regular occurrence, even when your grain bill contains over 60% rice. So buy more rice hulls than you think you’ll need. Roughly 1 pound of rice hulls for every 6-7 pounds of millet/buckwheat mash. You’ll also need to Mash at a temperature that leaves most people scratching their heads: 163.4⁰F. The reason why? I’m not too sure. Even the grain malters say this came from trial and error. But other temperatures don’t allow you to get close enough to the 75% starch conversion target consistently. From personal experience, and talking with the team at Ghostfish, a single infusion mash between 152⁰F and 158⁰F has been working perfectly. I will typically mash for at least 90 minutes as well and use amylase enzyme to increase my chances of getting adequate enzymatic conversion. I also rarely do a protein rest, as you want to bring as many of the proteins in the grains as you can. Remember when I said these grains are great for pale ales, lagers, and IPAs? Gypsum is also great to add to any beer because of the yeast nutrient that it contains. Just be careful, since too much can make a beer crisper that you’d like (i.e., you can turn a Belgian Dubbel’s mouthfeel into a single).


Doesn’t Matter What it is, DRY HOP! 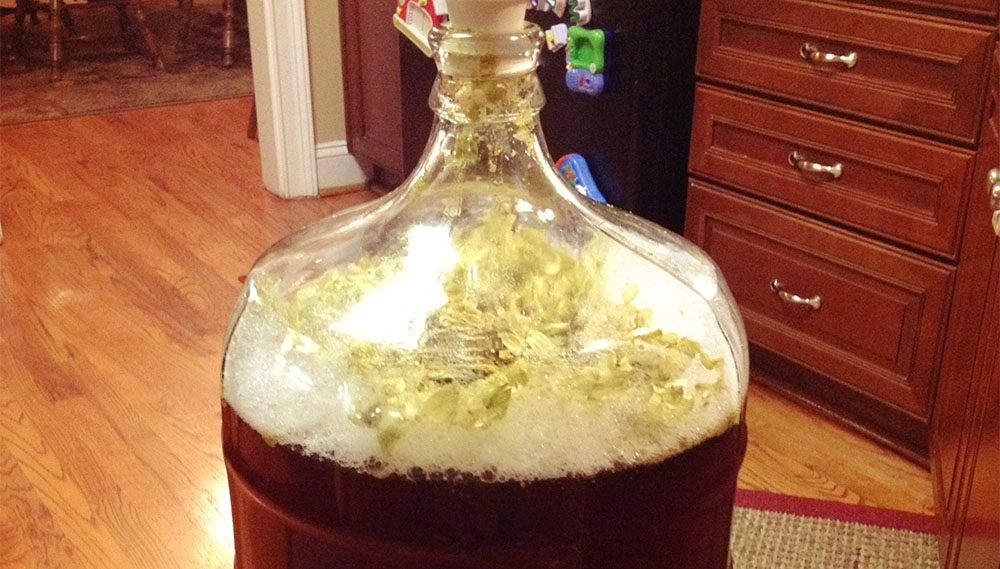 I don’t care what kind of beer you’re brewing with all gluten-free ingredients, you better dry hop. In my opinion, this is one of the most important parts about creating a gluten-free beer that actually has a “brewer’s signature” or “lacing” (foam that trails the beer down the glass and tells you how big of sips you’ve taken). Since there is that lack of protein in the grains, you need all the help you can get from the iso-alpha acids present in hops. In fact, I’ll typically dry hop with hops that have higher iso-alpha acid contents in my less bitter beers so that I can get good aroma and head retention without the bitterness. One of my biggest keys with dry hopping is that I’ll only do it for three days as I’m cooling the beer down. This really helps keep the grassiness away and imparts those extra aromas that give the beer added character.
Gluten-free brewing is the real wild-west of brewing. There really is no convention established here. So take it and run with it. There are so many other beers yet to be made.
Here’s a recipe for my Disco Funk Pale Ale (5.5 Gallons):
5 lbs. Pale Rice Malt
2 lbs. American Roasted Millet Malt
2 lbs. Crystal Rice Malt
Boil Additions
6.6 lbs. Sorghum Extract (½ at 30 minutes into boil, and ½ at 5 minutes)
2 lbs. Golden Beet Syrup (at 5 minutes)
½ lb. Maltodextrin (at 5 minutes)
½ lb. Rice Milk Powder (at 5 minutes)
1 oz. Palisades leaf hop @60
.25 oz. Chinook leaf hops @60
1 oz. Liberty leaf hops @60
1 oz. Palisades leaf hop @15
1.25 oz. Chinook leaf hops @15
1 oz. Liberty leaf hops @15
1 oz. Palisades leaf hop @5
1.5 oz. Chinook leaf hops @5
1 oz. Liberty leaf hops @5
1 vial Funktown Pale Ale Yeast Blend from Yeast Bay (produced by White Labs)
I let it sit for 3 weeks at 70⁰F and then dry hop with 1 oz. Comet hop pellets (no bag) 3 days before transferring to bottle and keg. Incredible citrus notes and passionfruit/pineapple. Smooth finish with great head retention. It ended up being more on the IPA side because of the Chinook hops, but great taste overall. Bottle conditioning really helps this beer. It gets to peak drinking at the four-month mark. It didn’t last in the keg, as you may assume.

R
Robert Keifer
Originally born and raised in San Jose, CA, I moved down to SOCAL for college at UC Irvine (Business Economics class of 2011), and decided to stick around after graduating. I’ve been gluten free since 2010, and was tired of never having any beer to drink. A mutual friend was into homebrewing, and had me come over to hang at a keg tasting, and once I mentioned Ghostfish in Seattle (GF brewery), they got the idea to help me brew a gluten-free beer. From there, I’ve been fully immersed in learning everything I can about brewing beer and brewing as many beers as I can. I currently work as the Talent Acquisition Specialist for a growing Cyber Security Consulting firm, Tevora, and I have aspirations of putting my beers on the map at the Pro-AM GABF, and bringing them to a wider audience by opening my own Brewery one day.

Do you have a gluten intolerance or do you have Celiac? I appreciate your article, but am curious about your use of spelt and clarity ferm.
How high can you get with your "soar joints"?
I have a gluten Intolerance- and have consistently used clarity ferm- specifically because I like to use liquid yeast- which has a tendency to have a gluten content as well. I've heard of people not using clarity ferm with Spelt and not having problems... but I don't personally take the risk.
Thanks!
Guess I still had some residual brain fog from my last Stone Delicious "session" lol. Good catch.
Lots of good stuff here. I don't have a gluten allergy, but I like as many different types of ingredients as I can get my hands on.
Nice article! We have a friend you has a severe reaction to gluten, which is why she imbibes in wine. (Well, I do too!). I'm finishing up reading Michael Tonsmeire's "American Sour Beers", and it occurs to me that the way sour beer brewers use fruits and other gluten-free adjuncts opens additional doors towards elevating the taste profile of a gluten-free beer, especially if the bittering of lots of hops isn't desired.
I like where your heads at, but what the **** is gluten?
More to come on that soon Ethan! Fruit is a great adjunct as well, not as much for body though, but one of my personal favorites to utilize, especially in big beers.
"Gluten is a composite of storage proteins termed prolamins and glutelins and stored together with starch in the endosperm of various grass-related grains. It is found in wheat, barley, rye, oat, related species and hybrids and products of these." Wikipedia
Great article! Thanks for sharing your knowledge & experience. I've tried OTS gluten free beer once in a while and is always discouraging, so I'm adding your recipe to my list.
Wait; Admin--what time zone are these Comments based on...looks to be somewhere in the middle of the Atlantic ocean! I'm EDT and it's 10:56AM now.
Monty's Masquerade is popular here with celiacs. I had it at beer festivals without realising it was gluten free.
https://www.ratebeer.com/beer/montys-masquerade/274830/
You must log in or register to reply here.
Share:
Facebook Twitter Reddit Pinterest Tumblr WhatsApp Email Link