Maple syrup is a fully fermentable sugar, so brewing with maple syrup will contribute to the alcohol content of your beer, but not necessarily the flavor. Whether you add the maple syrup to the mash, boil or bottle, brewing yeast will remove all of that natural taste. Luckily a few little tricks can bring the earthy-sweet taste of maple to your next brew. 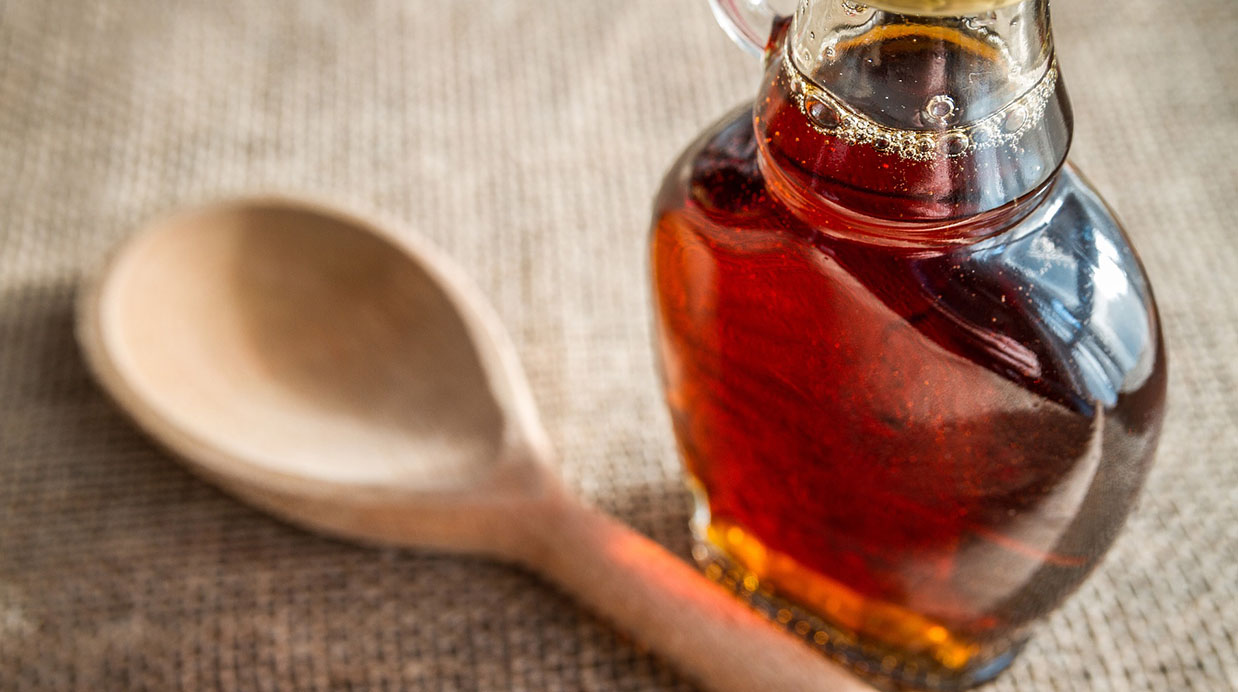 Tips for Getting More Maple Flavor

Firstly, brew a style of beer that’s already quite sweet. Consider a mash profile with some cara-malt to lay a foundation of non-fermenting sugars. You’ll find dark beers work quite well, but you can also experiment with lighter ales if you want more of a session beer.
Next, consider adding a tiny touch of cinnamon, a clove or two and/or vanilla to a secondary fermenter. These spices can mimic some of the natural taste of maple syrup. When combined with the sweetness you’re already getting from the non-fermenting sugars, these additions can bring on the depth of flavor you’re looking for.
Now let’s get a little more serious. Try racking the beer onto some oak chips (or whatever brewing wood chips you prefer). This will impart some of the natural earthy flavors. If you’re feeling particularly adventurous, soak the oak chips in a little dark rum (or bourbon) for a day or so beforehand, but be careful; the rum can easily destroy the balance of flavor in the brew, so only use it to soak the wood chips. Do not add any extra rum to the brew unless that’s the taste you’re searching for. Also remember that maple syrup does not taste at all like rum, so this particular option won’t help you zero-in on the illusive maple flavor.
For this article, we experimented with a range of brews incorporating each of these methods to try and instill the best possible taste.


What About Maple Syrup During Packaging

We found that the maple flavor was more closely mimicked in the dark beer (a porter) and there was absolutely no difference in flavor due to the priming agent. Unfortunately, this means we can’t sneak in any extra maple when we bottle, but it also indicates that there’s no need to buy maple syrup instead of your favorite priming sugar.
The most obvious result of this test was that the simple beers are far better in the end. My personal favorite was the porter with only a little vanilla in the secondary and very few rum soaked wood chips (the chips in this experiment were actually from rum barrels). With just a hint of the pseudo-maple flavor and the toasted caramel sweetness of the malt, it gave the impression of a much more precise brew. As a point of comparison, the pilsner with cloves, cinnamon and a dash of extra rum was rubbish. Someone drank it, of course, but it was rubbish.

Finally, one more funky additive to consider is bacon. Obviously there is no meat flavor inherently nestled in the subtle aromas of maple syrup, but they make a great pair. Next time you fry up some of everyone’s favorite pork product, eat the bacon and throw a dash of a strong and mildly flavored spirit (perhaps vodka) into the dirty pan. Alcohol is a lovely solvent, so let the spirit sit there for a half an hour or so to soak up all the grease. You can even use a spatula to scrape up some of the crispy bits into the solution (don’t worry, you’ll be getting rid of them later. Then pour the foul looking liquid, chunks and all, into a small bottle or jar. Place a straw in the bottle or jar so that it travels through the surface of the liquid and leave the container at room temperature for a few days. Be warned, it will look absolutely disgusting, but you’re not going to drink the whole thing; you’re just drawing out some of the bacon flavor.
After a few days, put the container in the freezer. You’ll notice that a layer of fat has formed on the surface of the spirit and the straw is spearing through that layer. When it’s frozen, remove the straw and you’ll see a tiny hole in the rock-hard layer of fat. The alcohol will not have frozen and you can pour the bacon-flavored spirit into another container. You’ll also want to run this peculiar smelling stuff through a coffee filter to ensure it’s all spirit, and no fat particles or chunks get through. This concoction will add a meaty taste to your beer that may not be the most refreshing flavor, so consider adding a tiny dash to a small batch in case you decide later that the pork should have stayed in the pan. 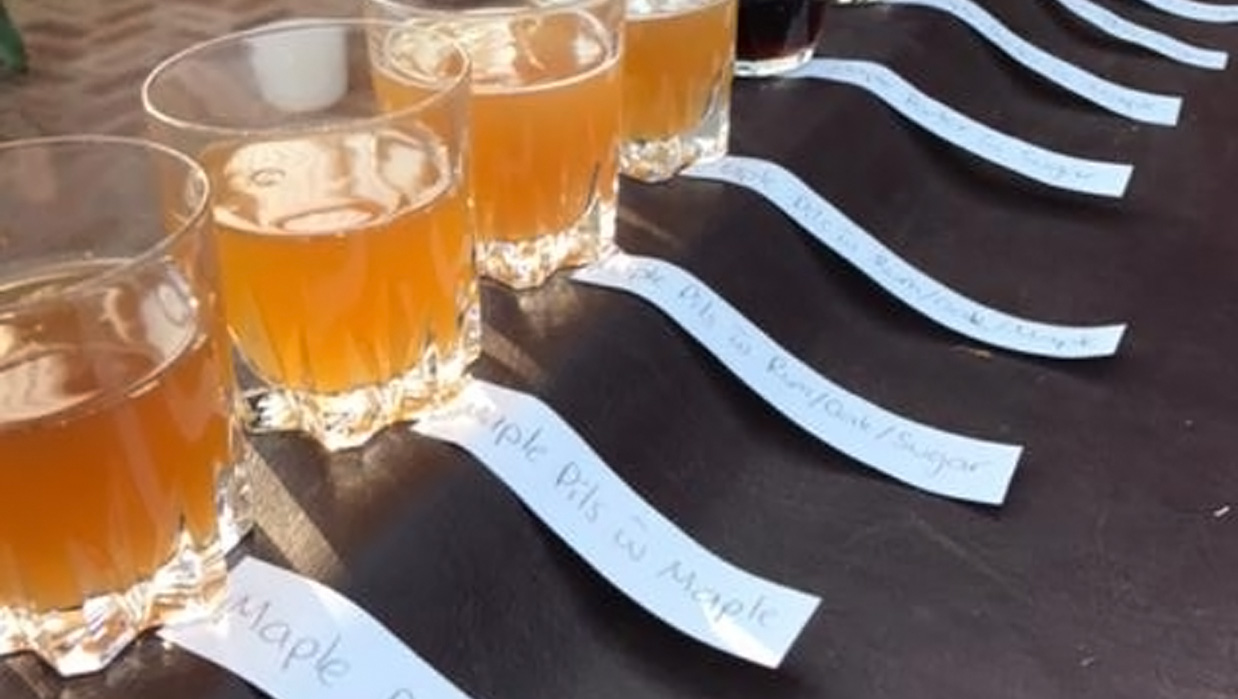 Now you can make maple-bacon beer BUT remember that simplicity will yield the best results.

Want to Read More About MapleS yrup? Check Out This Article »

Oh, and pure maple syrup, the lighter the grade, the better. I’ve told many a homebrewer about this technique, and it works just fine, giving good enough results to win numerous ribbons in homebrew competitions. It’s best to bottle from the keg before you’ve carbonated the beer, so right after you’ve transferred to the keg is the best time. You can bottle cold and carbonated beer, but beware as the addition of maple syrup will cause gushing before you get a chance to cap the bottle...
Last edited by a moderator: Apr 28, 2020

Nice right-up. I get the idea you're not getting much Maple taste from the use of Maple Syrup. It all ferments out... I wasn't sure if it was 100% fermentable. Thanks for confirming that. You could make a brown ale, with low bitterness at about 20 IBUs or less. Let if ferment-out, then rack to a keg, last of all hit it with sorbate and heated maple syrup. If so inclined, include the bacon liquor extract.
I made a maple brown ale very recently with smoked brown malt using maple wood for the smoke flavor (Smoked the pale malt grains to make brown malt) and used maple syrup at 6% of the grist for drying out the beer. Tastes roasty, a bit toasty, and smokey with no maple syrup flavor. Its in the secondary now, was thinking of maple extract, my suggestion above or doing nothing. Drink as it is now.
Thanks again for the write-up!
I've read that a combination of the one-two punch of Potassium Sorbate (to prevent the yeast from reproducing) and Potassium metabisulfite (to kill existing cells) along with cold crashing to slow fermentation while the chemicals work their magic will destroy the live yeast in a beer. I personally have never tried this and don't know anything about the correct procedures, quantities or health risks. Proceed at your own risk.
But once the yeast was dead, the beer could be kegged and back-sweetened with maple and or bacon and then force carbonated with CO2. My own personal opinion is that it sounds disgusting. Maple syrup and bacon belong on the breakfast plate. A nice mug of beer is occasionally a good breakfast beverage and would work as a nice accompaniment but usually not.
Another thing that helps with keeping more maple flavour is using the darker grades of Syrup. Generally the darker it is the richer and bilder the taste. This combined with some honey malt has worked for me in the past.
Also adding it a few days to a week after the initial primary fermentation ends and the krausen has dropped helps preserves some of the aroma and flavour.
Good idea and the brown ale is the perfect place to start. If you decide to drink your batch as it is now without attempting to adding any more maple (not a bad idea), you might want to consider incorporating a touch of maple to the beer in the glass as you're drinking it. The vast majority of homebrewers will suggest that it's cheating, but at least you'll get a sense of the flavour. You could tell your friends and family that your most recent batch is perfected with a touch of syrup and I reckon you'd find that people who aren't too concerned with the brewing process would be delighted. Cheers and good luck with it!
There must be something peculiar about brewing that does not happen with wine or mead making. Mead makers often make what they call acerglyn which is a honey wine fermented with maple syrup as a key flavoring component and the yeasts we typically use do not mask or destroy the maple flavor. The sugar of the syrup is certainly reduced or removed but the flavor is right up there - front and center. And in fact I recently made a maple wine - fermenting the syrup and add honey to back sweeten it and it was very maple flavored. Perhaps it's the hops or grains that mask the flavor, but wine yeasts seem to leave the flavor molecules to themselves... but then we don't "brew" acerglyns - No heat, nothing boiled. Perhaps that's where the problem lies.
Sorbating is a common thing to back sweeten cider after it runs dry. After it hits 1.000, you sorbate, then add a can of concentrated apple juice. Then force carb. It could work with beer. Wine conditioner is a sorbate and a simple invert syrup.
Good idea, darker grades of syrup. Hmmm. You could make a maple invert. Take 1lb of maple syrup, 1/4 tsp of citric acid, and one quart of water and bake it at 250F for 2.5 to 3.5 hours for #3 Brown invert or 3.5 to 5 for a #4 Dark Brown Invert. Might need to try that. I have done that with cane, demerrara and piloncillo sugars.
Why not use fenugreek seeds instead of the spices you mentioned? It has a maple taste without the sugars. Even food industry uses it to mimic maple taste in sugar-free products. Definitely worth a try!
By the way I found out that ground Fenugreek is a easy means to add maple flavor.
You must log in or register to reply here.
Share:
Facebook Twitter Reddit Pinterest Tumblr WhatsApp Email Link