A general question about RIMS. In my previous Brewery I had a 9 gal "Radiator" that I used to cycle heated water in the outer tube of a Chillzilla. The 9 Gal "Radiator" had a 2000 w 115 vac element under PID control. I had the Chillzilla insulated with Foil Bubble foam. It worked great for the most part except on a very cold brew day. My Brewery was and will be in an unheated barn. I suppose I could do a 30 AMP 5500 W 240VAC Element, but I thought of running a RIMS in the Hot water bath line. Since the amount of water to be heated is much smaller compared to the 5 or so gallons I had in the "Radiator", do you think a RIMS 2000 W 115 vac Element would be sufficient to continuously heat my hot water bath. Something like an On Demand Hot Water Heater. I would still have my "Radiator" as the accumulator and the Hot Water Bath could be preheated to near the target prior to mashing so it would be more maintaining a Temp. Maintaining the Temp was quite easy when there was no WORT flow in the inner Tube of the Chillzilla regardless of how cold it was. I also used this hot water, heated to 185, to sanitize the Cold side of the of the Brew Day brewery (Plate Chiller and hoses to the fermentor) during the Boil.

I really like the way the Wort turned out and the way I was able to maintain my Mash. I never did Step Mashes but had thought of this type of a RIMs to do one.

One of the reasons I would prefer a 20 amp circuit is that I will likely be limited to 150 amp service in my new Brewery. I will already be using two 30 amp circuits for my Huge HLT.

I am talking to Electricians and may just op to have a separate Meter set ($$$$$), in which case I would have 400 amps.

Your system sounds more like a HERMS that RIMS, but your "word picture" is hard to follow. Perhaps a detailed drawing/schematic of your system would get you more responses to your query.

It is a modified HERMS. I was just thinking that using a RIMS tube to heat my hot water bath would give me good control. It has only been an issue on a very cold day with the Radiator. I have never used a RIMS tube (and don't have one now). I was just looking to see the efficiency of a RIMS tube. I am rebuilding my Brewery and was wondering if an Element in a RIMS tube rather than the Radiator would work. I would preheat the water in the Radiator. I was thinking that the smaller amount of water needed to be heated would make it where I could brew on the coldest day of the year and not have any issues of maintaining my mash.

I started Brewing in 2008 and started using the modified HERMS about 2012 or so. on 95% or more brew days, I was able to hold my Mash at Temp within 1/2 a degree. Only on really cold days was there a lack of enough power.

Unfortunately I had a fire (caused by a riding mower) that made a mess of the Brewery as well.

I am not a fan of using Electric Elements in contact with Wort (personal choice). I prefer to boil with propane. Since I am starting over, but with more knowledge, I was thinking of some solutions to some issues that I had.

I was thinking of adding a RIMS tube in this manner before. I was just trying to see how well a RIMS tube worked from someone who has experience with one. 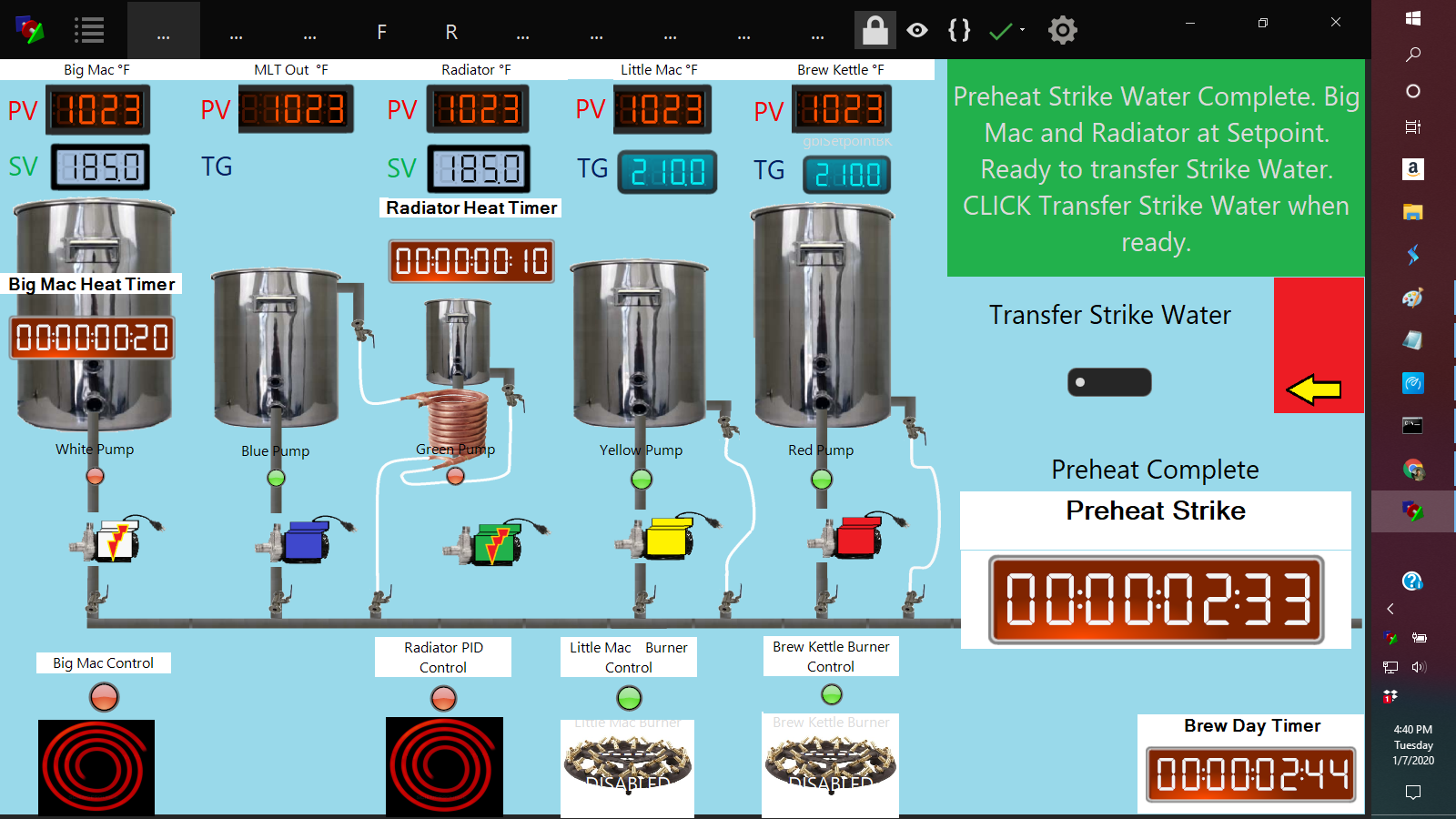 No doubt the overall effectiveness is reduced, but the only temperature I am interested in is the exit flow from the tube. The Hot Water Bath in the outer tube is what maintains the Mash Temp in the inner tube.

I was wondering what type of Delta you could get out of the tube. More like someone who is doing a step mash with a RIMS. 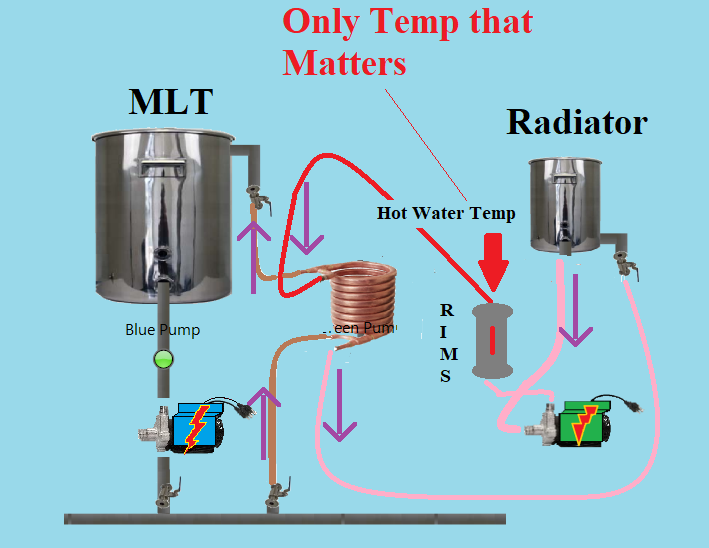 oakbarn said:
No doubt the overall effectiveness is reduced, but the only temperature I am interested in is the exit flow from the tube.
Click to expand...

Which is still dependent on the temperature of the water entering the tube which is also still dependent on heat losses in the Radiator thingy. So you'll have the same losses as before with the additional losses from the RIMS tube on top of that. In thermodynamics there is no such thing as a free lunch...
If your goal is to get more from the same power element then you need to simplify the system and not add parts to it. The most effective system (from an energy standpoint) would of course be a run of the mill RIMS system where you just circulate the wort throug the RIMS tube.

Systems like this make me even happier with my single vessel eBIAB rig.

I've seen several e-RIMS and e-HERMS systems and hybrids of those of all sorts.

One of my brew friends (using a 20 gallon system) uses a small (1 gallon?) pot filled with water, that's heated directly with a cheap fold-over domestic water heater element. Inside that small pot is a wort coil (6' of stainless tubing) through which the wort is pumped. A sensor on the exit of the wort coil steers the PID that controls the element. It's very efficient and due to the small water volume it's very responsive.

You're having something similar.
Definitely insulate the CFC to reduce heat loss to the environment.
OP

I had a coil in a bath but I did not like it. I had a Chillzilla laying around after I had got a duda deisel plate Chiller B3-95A 20 Plate Sanitary Beer Wort Chiller [HX9520:F100xTriclamp075] | DudaDiesel Biodiesel Supplies

I thought it might work. I ordered an Electric 9 gal Stout BK and hooked everything up. I was controlling the ( 9 gal BK with about 5 g water) using a PID. It worked very well on most brew days. The only issue was when it was very cold. I did insulate both the MLT (35 gal Stout MLT) and the Chillzilla. That helped but still I could not maintain my Mash over the 90 minutes on a very cold day. It was close, but I lost about 3 degrees F in the 90 minutes. When I started the Mash like at 152F, I would have my Radiator water at 154F. On a normal Brew day, I would reduce this to 152F. On a cold day, it would go down to about 148F over the 90 minutes even at 100% power. It was just undersized for the job. I only had a 20 amp circuit so a 2000W element was what I had. Obviously if I had a 30 amp 240, I could have used a 5500 watt element. I was thinking of adding an additional element from a different 15 amp circuit in a RIMS tube just prior to the Chillzilla Hot Water Inlet to boost the Water Bath. That would have easily worked. Since I am replacing the Brewery (long story), I have several options:

The reason I am going with a 15 gal BK instead of a 9 gal is that I sometimes need to heat about 12 gals of distilled water for one of the Lagers we make. It would do double duty.

Regardless, the Mash would be at Mash Temp to start. The Water Bath is normally at strike when we begin and we add about a cup of cold water to drop to Mash + 2 which normally works well. So the Thermal mass of the Water Bath and the WORT is ALREADY at Temp. I am not trying to heat a mass of water or WORT, just maintain a Temperature of the WORT + 2 in the water in the Inlet of the Chillzilla.


I have never used a RIMS so I don't know the Thermodynamics of it. It would seem, on the surface, that option 3 above would work. If I had it almost work in the big Bath (5 gals), it would seem I could achieve the Mash + 2 (154) if my supply was 140 or so (after being chilled by circulating and thermal loss) in the RIMS tube. The question is:

Can 140F Water be heated to 154F (a 14 degree differential) in a 2000 watt RIMS tube? I personally think the water in the 15 gal BK would not even get that low, but I do not know. I had about a 6 degree lost without the RIMS and a smaller BK. Both the RIMS and the Larger 15 g BK would increase that loss.

Option 4: Of course, I could put my Brewery in a heated area, but someone says NO!
OP

Bobby_M said:
Systems like this make me even happier with my single vessel eBIAB rig.
Click to expand...

I like complicated. The more Bells and Whistles! We had 6 pumps!
V

oakbarn said:
Option 4: Of course, I could put my Brewery in a heated area, but someone says NO!
Click to expand...

If you keep increasing both the element power as well as the radiating surface of your system your brewery IS going to become a heated area...

If you're limited to a 150 AMP system and haven't built the system yet, then anything that you can run at 240V will be beneficial in your case because you are halving the amperage.
You must log in or register to reply here.
Share:
Facebook Twitter Reddit Pinterest Tumblr WhatsApp Email Link

B
GFCI and general eclectic questions

A
To RIMS, or not to RIMS? That is my question.