In my last article about gelatin, I explained how it works (physically and chemically) and proved that a short boil does no harm to it, busting a common brewing myth. After multiple positive responses, I decided to do an experiment to bring more light into another commonly discussed, gelatin related topic: “Do you have to cold crash before gelatin fining?” While with the last topic, opinions were quite polarized, some people saying boiling gelatin is a disaster, others being on my side, with this one, most people agree cold crashing is recommended. Let’s look how much of a difference it really makes!


What Exactly is a Chill Haze?

Every homebrewer knows that sometimes, after putting a warm bottle of apparently clear beer into a refrigerator, the beer becomes hazy as it cools. Generally, some proteins are insoluble in beer, while others are soluble up to a certain concentration if certain conditions are met. The insoluble ones are not a problem, as most of them settle during whirlpool or during fermentation, however, temperature is the limiting condition for the soluble ones. Years ago, at school, we did an experiment, comparing salt solubility in cold vs hot water. I learned, that in hot water, the solubility of table salt is slightly higher than in cold water, but also that when I cool the hot sample, the extra salt “jumps” out of solution, which is called precipitation. The same happens to proteins in beer, forming the well-known chill haze. That is why lagers don’t get hazy. They are cleared (usually by filtering) at near freezing temperatures, so by cooling a bottle of lager to a serving temperature, you are still not reaching the chill haze point.

Before making an experiment, I formulated a few hypotheses based on my limited knowledge of the problem. 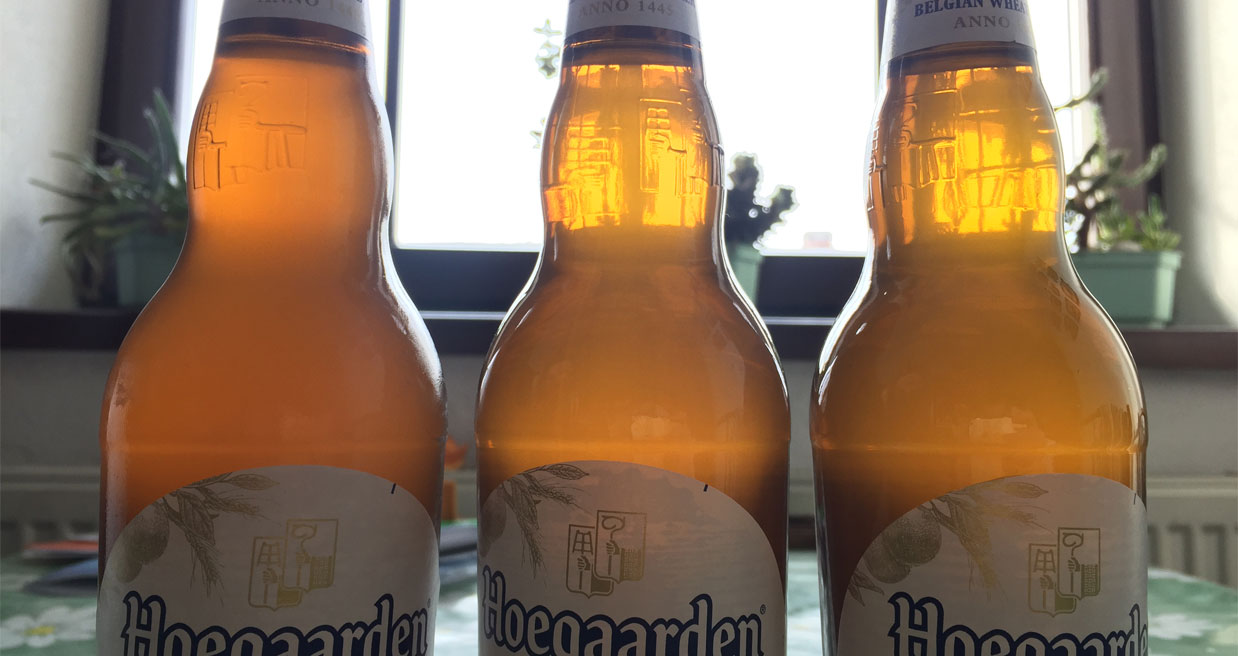 The three samples of the same beer have been stored upright for 12 hours, one of them in the fridge, the other two warm. I took a photo to show you the chill haze, the warm ones were almost clear, despite being witbiers. I then injected one cold and one warm sample with the same amount of (boiled) gelatin, capped them and shook all three samples well. I returned the cold sample into my kegerator and the warm ones into my closet.
80 hours later: I took all three samples out for documentation. The difference was quite dramatic. The chilled sample, which was the haziest before, was almost clear, only showing a slight haze in the lower part of the bottle (the photo is not accurate here, probably due to artificial light). The untouched warm sample was now the haziest one. The warm sample with gelatin was interesting, because while it appears to be clear in the photos, with my bare eye I could see tiny but visible solid particles floating inside, equally distributed top to bottom, maybe 2mm apart. I have no hypothesis for this. It was, nevertheless, the clearest of the three with the best readability. After this documentation, all three samples were put into the kegerator. 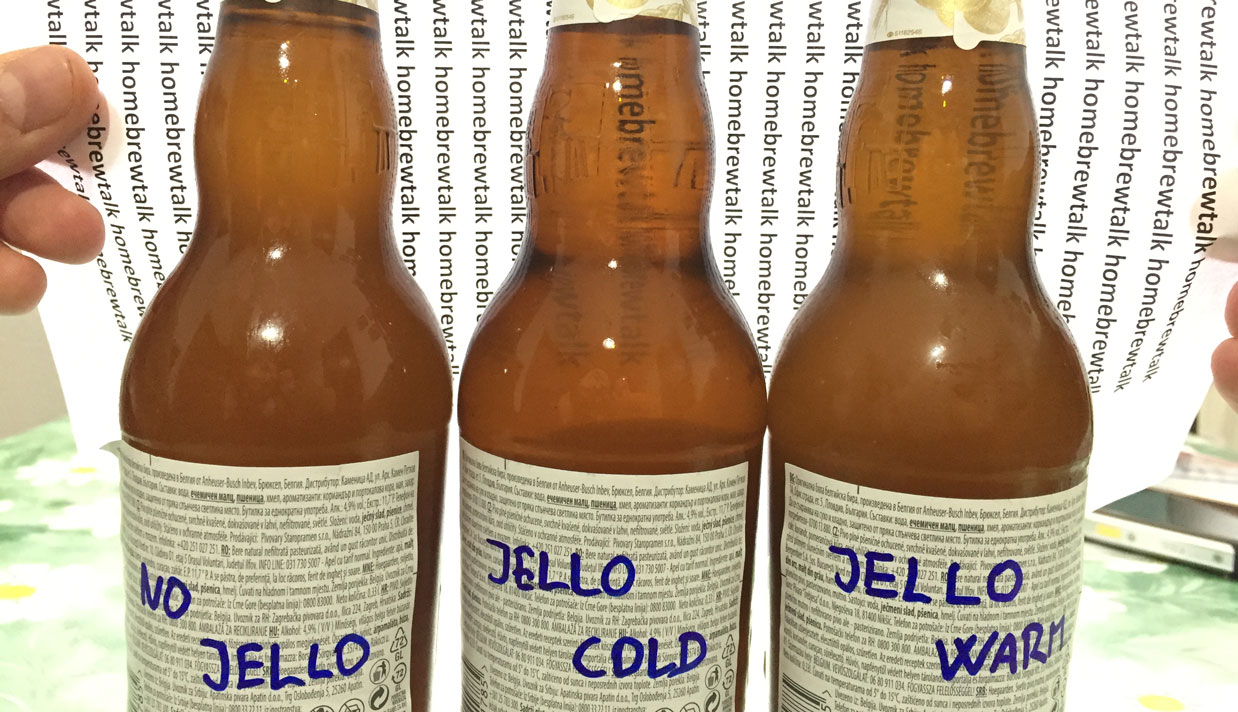 20 hours later: Another quick check, just to see how the warm samples react to chilling. The untouched one was no surprise, but the (previously) warm one with gelatin was the same, impossible to even recognize anything behind the bottle.

So here it is, the final results. You may argue that the cooled sample had more time to settle in the cold, and I agree the schedule I have chosen was probably not ideal, but it was hard to decide which one to choose. However, I adjusted to this by only making 0,75ml samples, so only the upper ¼ of the bottle ends up in the glass. From my experience with gelatin I know that beer drops crystal clear in 3-5 days in a half meter tall keg, sucking from the very bottom. Anyway, the results are obvious, the cold fined sample was crystal clear, the untouched one opaque and the warm fined one only slightly clearer, although I cannot comment on the floating particles as the beer was too hazy to see them. Taste-wise, the clear one was a bit crisper and somewhat juicier, while both of the hazy ones were a tad more velvety with fuller body, which I preferred with this particular beer style. 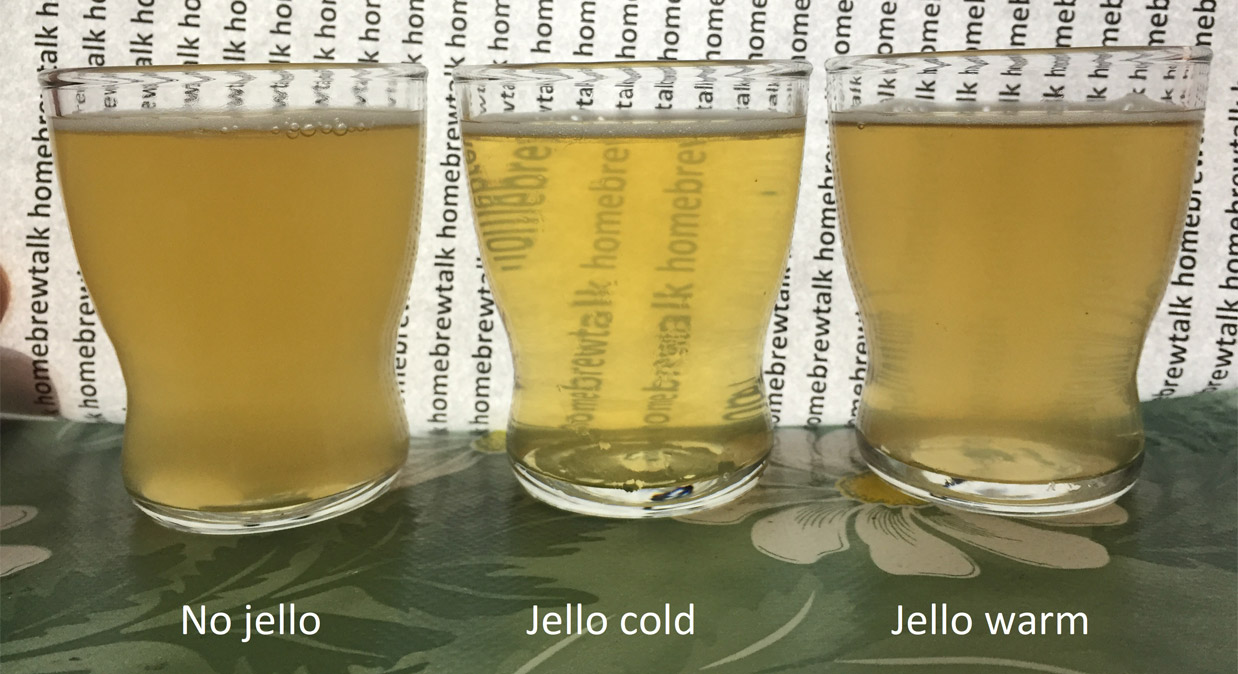 Unfortunately, it appears there is no way around it. Adding gelatin to warm beer might help with clarity very slightly, but I would not recommend it if you are planning to keg-fine anyway. If you are bottling directly after a warm primary or secondary, you might get a slight advantage at a cost of one extra fermentor opening (possibility of oxidation, infection). Decision is up to you.

Want to Read More About Cereal Adjuncts? Check Out This Article »

Many all-grain brewers seem to be put off when anything beyond a single infusion comes up in a recipe. Terms like “triple decoction” conjure up images of steampunk laboratories, mad scientists, and hump-backed henchman. Cereal mashing seems to get the same response, which is understandable as just about every article on the subject is filled with diastatic calculations, gelatinization temps, etc. which no one having a beer on brew day wants to remotely contend with...

R
Robert Solarik
My name is Robert (but I like to call myself Robko). I was born, and I also live in Slovakia, a small country south of Poland. Ever since I was born, I have been curious how things work, which led to basically all my toys being disassembled at some point of their short lifespan. During high school times, however, I discovered the charm of homebrewing and after graduating, I was not really decided what university to proceed to. I don’t like doing things if I am not sure they make sense, so I got a job as a head-brewer in a small brewery, because that was my biggest passion at the time. After two successful years I finally decided for studies of mechatronics at a technical university in my hometown, and I am enjoying every bit of it. I am still brewing actively at home. It has been five years since I started.

This is another solid article Robko, thanks for submitting it.
NB!!!
Like Bob said, thank you for another great article.
I have a couple questions:
1. What were the temps in the closet and kegerator?
2. Your beer was already at cold crashing temp. What do you think the upper temp cutoff of temp might be? In the Brulosophy documented quick lager method it says you can add gelatin at 50 degrees.
In my second question I should have added that it said you can add gelatin at 50 degrees during the cool down to cold crashing / lagering temps.
1. Closet was somewhere around 20°C and kegerator around 3°C.
2. Just by my intuition, I would say it is best to add gelatin when you are at minimum temperature, although it might also work if the beer reaches the minimal temperature soon after adding gelatin (hours).
Fantastic article Robko!
Thanks for sharing this experiment, Robert. I'm using gelatin for the first time now and I can see some very similar results. Cold crashed for a couple of days at 0.5°C first, then added a bit of silica gel, mixed and waited for a while, then about 0.15 grams/liter gelatin dissolved in some water (almost boiling but not quite, dumped into beer at 65°C). Didn't see much of a difference at 24 hr mark, but definitely saw some visible progress at around 40 hrs and now at around 60 hrs it looks very bright and clear already. Going to give it one more day before bottling, I think.
I should probably add that the kind of haze I am trying to drop is solely chill haze as I have a very flocculent yeast and the beer is already clear at room temperature. I think it is possible that yeast could be dropping in a faster pace as sometimes brewers seem to notice a clear cut effect overnight. Or it may be dose dependent. This is something that could be studied in practice as well. I also noticed, from some brewing related studies, that gelatin extracted from skin should be more suitable for fining than gelatin extracted from bones. These are two different types of gelatin with somewhat different structure. In the product that I am using in this batch, it says that it is extracted from porcine skin (I think a lot of supermarket brands are from skin these days).
I have always just used whirlfloc in the boil (10-15 minutes) and never have had any haziness or chill haze other than when purposefully making a NEIPA (where I omit the whirlfloc). It begs the question as to why use gelatin at all, since it is one more step that is not necessary with whirlfloc. I don't do wheat beers, though, but aren't you supposed to leave the haze in? (I am a bit ignorant on this style)
Not to detract from your experiment, though. It would be nice if you added the experimental conditions, such as how much gelatin, how it was dissolved before adding, what type/brand of gelatin, recipe used, etc. Science is all about replication and confirmation, IMHO.
I do a cold crash to 50F then gelatin phase and crash to 32F, which after two days gets me 80 percent to glass clear (like your jello clear photo). Thereafter, I transfer to 5 gallon keg still at 32F but add in 10 grams of biofine clear. Purge keg with Co2, and give it a shake to distribute the biofine. After two days, the beer is 97-98 percent clear - almost filtered clear. The biofine basically gives me in 48 hours what 2-3 weeks of lagering (post gelatin) would give. It appears to me that gelatin handles most of the yeast, and biofine works on the remaining chill-haze producing proteins. This gelatin-biofine approach is also much cheaper than just using a lot of biofine instead of gelatin, as biofine is much more expensive than gelatin. I might try upping the biofine to 15 grams to see if I can get it to 99+ percent clear.
Quick question and maybe experimenting is required, but what if you throw the gelatin in a empty keg, pressure transfer the beer over, and then immediately throw it in the kegerator? Would that get cool enough quick enough to get the same effect as a beer that's already been cold crashed?
Nicely done. Thanks for the article. It confirms what I already thought
Thanks for the article and research. Here's an example my cold crash and gelatin fining. Cold crash for 3 days, gelatin fine for 2 days, then keg leaving the goop behind.
https://www.homebrewtalk.com/forum/threads/what-are-you-drinking-now.221302/page-6150#post-8472325
You must log in or register to reply here.
Share:
Facebook Twitter Reddit Pinterest Tumblr WhatsApp Email Link