Funk In The House

Wild brews and sour beers are all the rage these days, quickly becoming the favorite style among beer enthusiasts. This increased popularity among both professional brewers and homebrewers in recent years has shed light on some of the finer nuances of mixed fermentation. In spite of this, there still exists a gap between theoretical brewing science and practical homebrewing application. My goal was to help close this gap, by experimenting with one of the most feared and beloved brewhouse microorganisms; Brettanomyces.
Introduction to Brettanomyces
Brettanomyces is a wild yeast (not a bacteria) involved in the production of wild and sour beers. "Brett" as it is commonly referred to, was first isolated in 1904 and recognized as the microorganism responsible for secondary fermentation in a variety of English style-beers. In general, the role of Brettanomyces is to ferment long-chain dextrins that Saccharomyces cannot break down. Throughout this process, Brettanomyces contributes to a wide range of aromatics and flavors from horse blanket to pineapple to band-aid, among others. It is not responsible for the acid, sour, or tart components in sour beers, but can be coaxed to produce trace amounts of acetic acid with the appropriate environmental conditions.
The five identified species of Brettanomyces include B. anomalus (also referred to as B. claussenii), B. bruxellensis (also referred to as B. lambicus), B. custersianus, B. naardenesis, and B. nanus (most recently reclassified as Eeniella nana). Of the identified species, B. anomalus and B. bruxellensis are most commonly available from commercial yeast suppliers, however the other species can also be purchased for homebrewing purposes.
To generalize its role in various beers, Brettanomyces can be "classified" into three distinct categories: mixed fermentation, Brettanomyces conditioned, and 100% Brettanomyces fermented.
Mixed fermentation is commonly seen with Lambic, Gueuze, Flanders Red, Oud Bruin, Farmhouse Ale, and American Wild Ale. This is perhaps the most common technique to feature Brett in combination with other yeast and/or bacteria. In this role, Brett can serve multiple functions, from enhancing aromatics and flavors, to improving attenuation, to breaking down diacetyl. Some of my favorite mixed fermentation beers include Cantillon Classic Gueuze, Russian River Temptation, and Crooked Stave Surette Provision Saison. 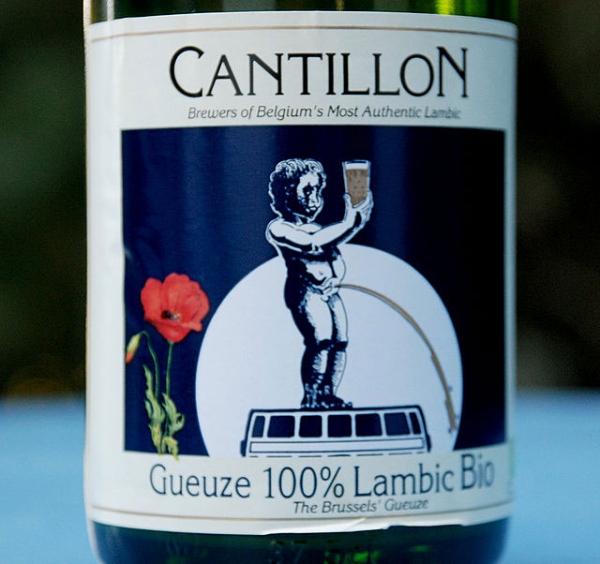 Brettanomyces is featured in many mixed fermentation beers
Brettanomyces conditioned beers can technically be considered mixed fermentations, depending on when the Brett was added during the process. I specifically chose to separate beers conditioned with Brettanomyces because the flavors and aromatics are often more aggressive, perhaps due to the microorganism working in a more stressful environment. Here, a strong funk or barnyard influence is often the goal, such as with Brasserie d'Orval S.A Orval Trappist Ale or Green Flash Rayon Vert.
100% Brettanomyces fermented beers are the newest trend utilizing Brett. Here, it is not a supporting cast member, but rather the lead fermentation microorganism. The style was pioneered by New Belgium/The Lost Abbey Mo Betta Bretta and Russian River Sanctification, but nowadays many breweries feature a 100% Brett beer. Some breweries, such as Crooked Stave and The Rare Barrel, use Brettanomyces as the sole fermenter (no Saccharomyces)!
More comprehensive text on Brettanomyces can be found in Wild Brews, American Sour Beers, and The Brettanomyces Project.
Brettanomyces Experiment
After researching and tasting many commercial examples of beers featuring Brettanomyces, I was intrigued enough to try brewing my own batch. But where to start? 100% Brett beers were most foreign (and therefore intriguing) to me, so I began to construct a recipe.
Drawing inspiration from a variety of beers, I concluded that a Belgian Pale/Blonde Ale recipe would render both hops and malt in the background, and let the Brett do it's thing, front and center. The recipe was based one of my favorite examples of the style; Russian River Redemption. After scouring the internet for a clone recipe and a bit of tweaking, the final 10.5-gallon recipe I felt confident with was:
With my recipe in hand, and my engineering mind at work, I opted to brew 21 gallons of wort, split into seven 3-gallon batches, with seven different Brettanomyces strains as the sole fermenter. The experiment was dubbed the "Funk In The House Series" with the goal to analyze the impact of several popular Brettanomyces strains in 100% Brett primary fermentation beers. To add even greater complexity, portions of each batch were aged with fruit, blended, dry hopped, or soured. A comprehensive overview of the specific Brettanomyces strains, fruits, and ratios used can be seen below:

Detailed overview of experimental Funk In The House Series batches
A single infusion mash was held at 152F for 60 minutes. Belma hops were added at the start of the boil, which lasted for 60 minutes. After flameout, wort was chilled to 68F using a plate chiller, pumped into its respective bucket, and aerated for 60 seconds using pure oxygen. Each Brettanomyces culture was pitched at rate of approximately 10 million cells per milliliter.
Fermentation was conducted at ambient temperature (68F) in 5-gallon homebrew buckets. Specific gravities were measured for three consecutive days starting 4 weeks from brew day, and all gravities were stable at that time. The non-fruited portion was bottled. Fresh (cleaned then frozen) or frozen fruit was added to each bucket and allowed to re-ferment for 8 weeks. Once gravities were stable for three consecutive days, the fruited portion was bottled. The remaining beer (and fruit) for all batches was blended and then split between two 5-gallon buckets. One bucket was pitched with sour ale bottle dregs and left to forget about for one year, while the other bucket was allowed 4 weeks to condition. Once stable, half of the latter batch was bottled, and half dry hopped. After one week of dry hops, the last portion of the blended bucket was bottled. 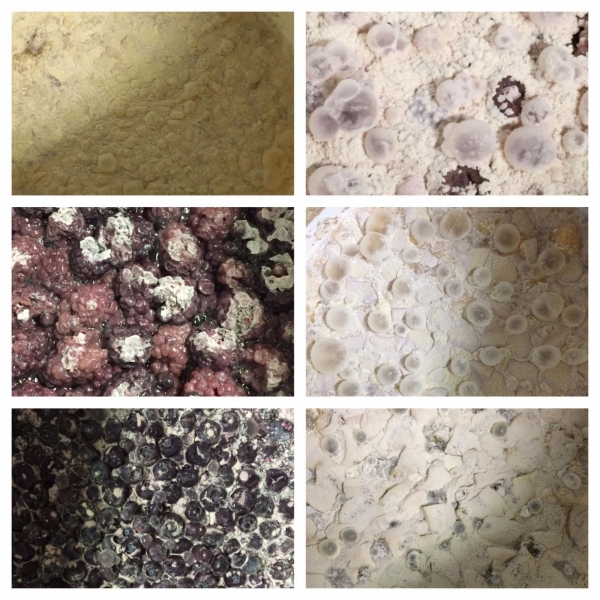 Various Brettanomyces pellicle formations
At this time, 19 of the 21 gallons of beer are in bottles, naturally carbonating with no additional yeast added at bottling. The remaining two gallons will be allowed to sour for a minimum of 12 months before bottling. Once properly bottled condition, comprehensive tasting notes of the various batches will be provided, as well as feedback on experimental technique with recommendations for future improvement.
***
Andrew is the latest writer to join the HomeBrewTalk team! For more from this talented brewer and writer find him on his multiple social media account, or at his blog ThirdLeapBrewing.com!

Welcome back to Instagram. Sign in to check out what your friends, family & interests have been capturing & sharing around the world. 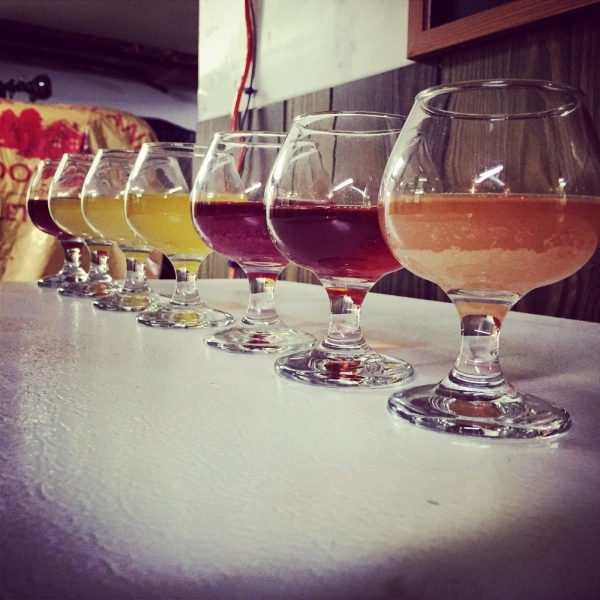 Good Read....I am a HUGE fan of wild beers and I wish more breweries would see the potential in this market. I feel like the ones that are out there creating funky beer on a regular basis are widely popular for it and sell out quickly. They are sought after, collected, traded, and cherished. Sure the bud light diehards won't appreciate them, but then again, those people don't appreciate any good flavored beer. I use Brett on a regular basis on a homebrew level and have just started playing with lacto as well.

I'm just getting into messing with Brett in the last year. So far, I've turned out 3 really good brews. I bottled one, a peach farmhouse to see how it ages. The other 2, I conditioned in the fermenter for months then kegged. I just tapped on of those yesterday. Excellent brew.
I plan to do many more in the future.

Maybe I'm misunderstanding your chart, but can you talk about how you came up with your amounts of fruit? Some of the numbers seem wildly higher than recommended amounts I have seen previously. 10 lbs kiwi per 1.5 gallons of beer?
Also, how did you decide which fruit to add to which yeast?

@CorporateHippie
Thanks for the feedback.
I agree with your rationale, I too hope to see more breweries dabble with wild brews in the coming years.

@kaz4121 Interesting, thanks for the reply. Looking forward to the tasting notes!

That's amazing man! I'm feeling inspired and would absolutely love to do an experiment of this scale.

I'd be interested in having a BJCP in the New England area help review these. Any interest?

taxonomic nerd alert: "... and B. nanus (most recently reclassified as Eeniella nana)" - that reclassification occurred in 1981 (http://ijs.sgmjournals.org/content/31/2/196.full.pdf+html), not sure if that still qualifies as 'recently'.
</nerd_alert>

Those Brett pellicle photos could be blown up onto a huge canvas and serve as brewing geek art. Beautiful.
I am so blessed to be in Crooked Stave's hometown. I splurge for them regularly.

you have inspired me to make sour beer! thanks

can I ask where you sourced the cab sauv grapes?

I lucked out an have a neighbor that makes wine and borrowed some of his grapes (in leiu of spending $100-200 on frozen grape must from a place like http://www.juicegrape.com/). Another alternative is to blend wine with the beer at bottling, although the flavors will be somewhat different. If you use this approach (I've done this before) I'd recommend measuring a precise amount of beer and blending the wine and beer in a small volume (10-16 oz) and scaling up to figuring out how much you need for a whole batch. In my experience, I prefer somewhere around 0.5-1 cup per 5 gallons

I'm glad you posted a picture of the pellicles. Because I've never seen a picture of one. And if I ever opened a bucket and saw that, down the toilet it would go! Lol. Very much interested in trying out some Brett in an IPA. There's a 100% Brett IPA recipe in the recipe section that I'm looking forward to trying soon. Thanks for the article!

Viability of Belgian Sour Mix After Delay in Shipping