I recently built a floating heating element........... for a non brewing application. It was extremely simple and worked very well..........nor am I worried about shock due to having sealed the connections well. A ground fault protector would be an added layer of protection. In this case the element was made from a car tank heater.... as it was not heating anything for human consumption......... and my float was made from ordinary blue foam... again, I wasn't going to drink the liquid I was heating.

It occurs to me that the same principle could be applied to a brew kettle using a water heater element for the boil. Simply take a small stainless steel pot, mount your water heater element through a hole in the bottom, hook up your wires, and pour some polyester resin or some other resin in the bottom to seal the connections, and float it in the wort, strike water, etc.... An ultra low current density element would eliminate scorching / burning of wort. It could be easily transferred into whatever pot you were using.......... even the mash tun, provided you stirred steadily as you were heating.

A similar idea occurred to me, and I found this post when searching for others that have done the same thing. I'm sure it's been done but I wanted to post my proof of concept attempt.

I went with a 1000W Camco heating element. It was $13.00 on Amazon, and I bought the Nut that Amazon recommended would fit it. (It does). For safety sake I bought a GFCI outlet too. I have the GFCI outlets in my bathroom already, but this will primarily be used in the garage, and I like how this one lets me move it around.

I didn't have the heating temp controller either, so I bought the Inkbird Itc-308 Digital Temperature Controller for $38.99 on Amazon. This will have many uses outside of this project, but total cost including element, nut, GFCI, and controller was $72.73. I used a Glad food container as my float. I don't know what the cost of this was as I bought it years ago.

My primary motivation for this is to have my mash water pre-heating during the day so that when I'm done with work I can go out to the garage and dough in immediately. The shorter my brew day the more I will brew.

So I off-centered the hole in the Glad container so that the cord can lay across it and balance things out a little. Before plugging it in, I let it float for 24 hours, (just finger tightened) and there were no leaks. Then I plugged it in. It heated the small amount of water in the test cooler from 58F to 160F in 49 minutes. There was a notable difference in temp from top to bottom of the water. I'm sure this is improved by having the element at the bottom of the cooler like most people do it, but like I said this is a proof of concept experiment for me. I might upgrade to a bucket heater, or permanently mount the element in the cooler if this proves a problem. I do not plan to mash with this, only heat to strike temp.

Okay, here are some pictures. 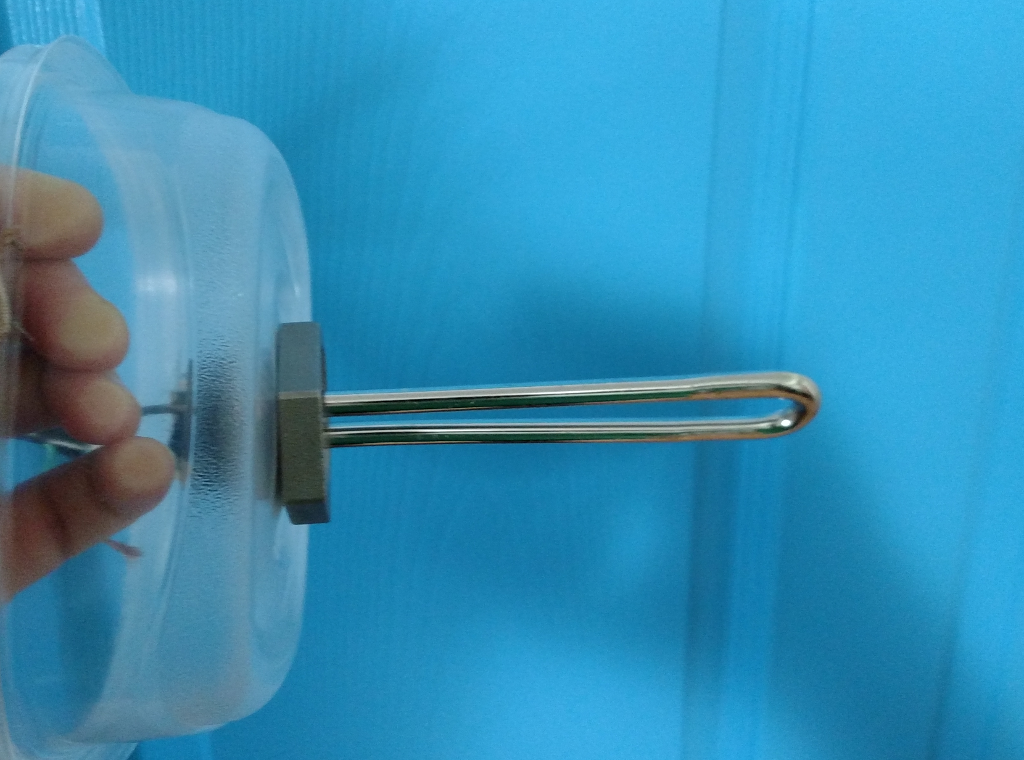 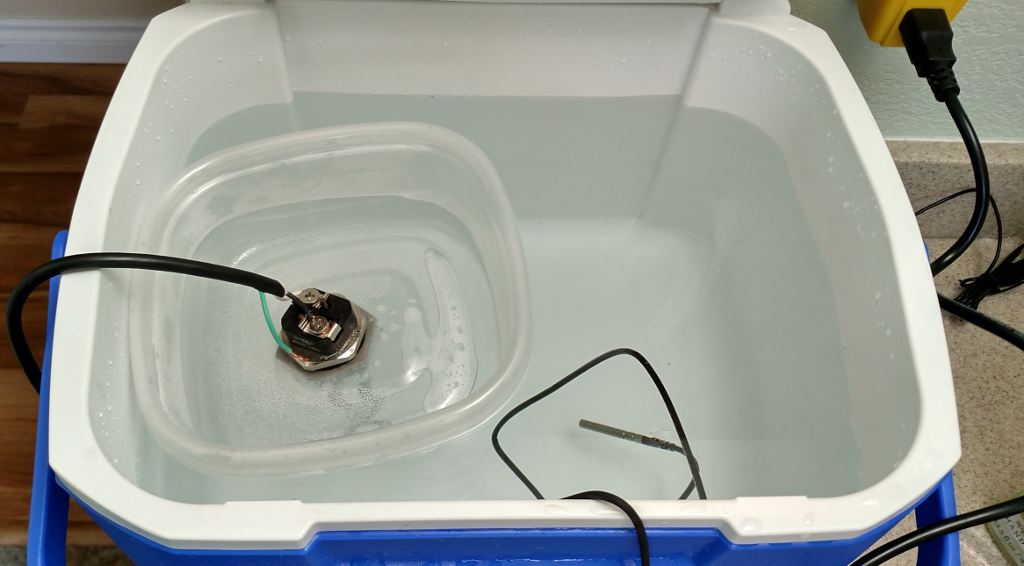 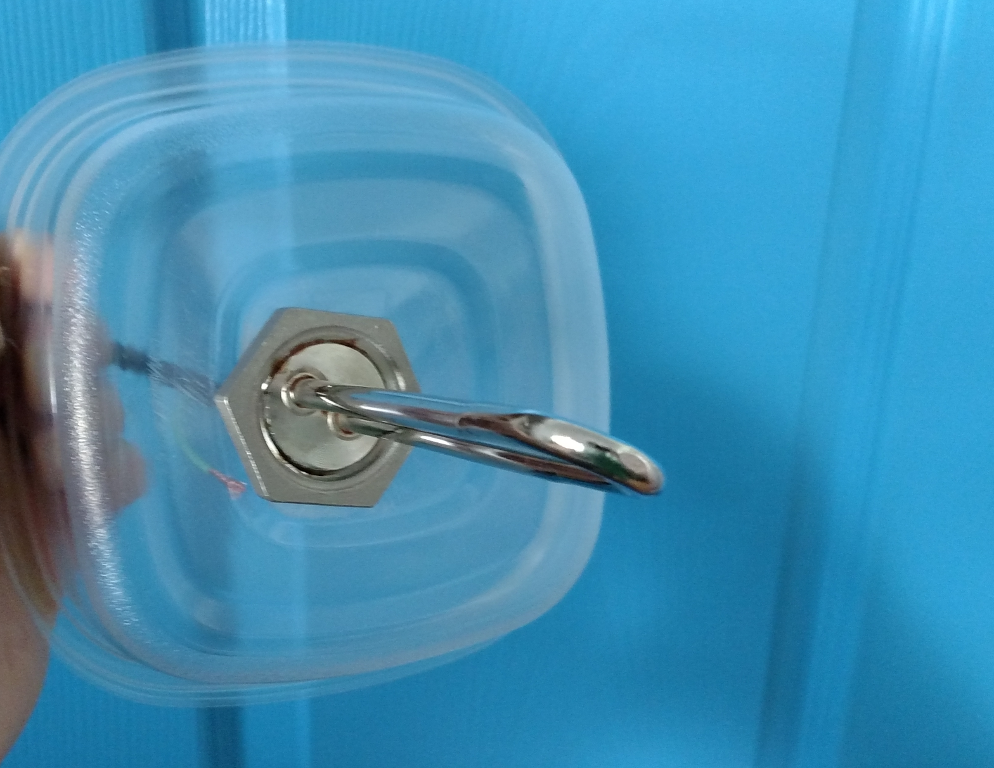 This is quite possibly the stupidest thing I've ever seen. Are you trying to kill yourself? You're betting your life on a GFCI outlet trips before your heart does?

Dear lord anyone else viewing this thread please do not attempt for your own safety.
J

Thanks for your feedback, but for others that might read this that are like me and want to know the reason this is the stupidest thing you've ever seen, can you explain how this is different from the bucket heaters, or bottom-installed heating elements that many home brewers put into coolers? What makes this more dangerous than that?
W

The electrical terminals are bare and exposed for any moron to accidentally touch. Also any water that does happen to leak through will pool in the Tupperware and probably would sink it and cause a short.

Got to say I agree, that looks scary as hell!
J

Okay. All good points. So how about this. The OP said he would

"...pour some polyester resin or some other resin in the bottom to seal the connections"
Click to expand...

Maybe I was premature in posting my progress so far, my plan is to seal the lid on to the Glad container with some silicone, and put the cord through a hole in the lid and seal that too...

Or what's a good resin to fill in around the connections? Looks like a neutral cured silicone might be the ticket.
M

That is actually a darn good idea, and the uses are endless. I'm sure many more people will say it is scary and dangerous, but with understanding and respect it could be as safe as any other method. Now that I think about it, my sous vide circulation heater should probably be put to use in my brewery somewhere.

MCFLYFYTER said:
That is actually a darn good idea, and the uses are endless. I'm sure many more people will say it is scary and dangerous, but with understanding and respect it could be as safe as any other method. Now that I think about it, my sous vide circulation heater should probably be put to use in my brewery somewhere.
Click to expand...

Many people will say this because it is insanely dangerous on so many levels. Water and electricity do not mix. A tupperware bin is in now way the proper container for a element float and neither is the element in use. Now multiply that by the exposed terminals and you're seriously asking to kill yourself.

If you want a floating element why not drop $25 and get on that is designed for this use and UL listed?? http://www.amazon.com/dp/B000B9SH1O/?tag=skimlinks_replacement-20
Last edited by a moderator: Oct 23, 2018
C

To poster #2:
Plastic melts-
Exposed leads/connectors-
What happens if you so much as bump the cord, let along trip on it?
What happens, even if by accident, water gets inside the tupperware?
And it sounds like you might leave it unattended for the entire day-- Got kids or curious neighbor kids by chance?
Got liability insurance that will cover that?

Some of the heat sticks I see on the web scare the crap out of me, but that is downright terrifying. Please stop.

What is the point of a floating heating element? I'm for new ideas, but typically ideas have to get past the, "Is this worth anything" stage before they get tested. This ones seems to have no benefit over a standard heat stick. So why float it?
J

FWIW I&#8217;m probably going to buy one of those bucket water heater sticks (Allied Precision 742G) based on the concern and points people have given. There are commercial floating water heaters for ponds and stock tanks, but all that I have found are thermostatically controlled, so they will stop heating before the water temperature reaches mash temp which is what I'm aiming for.
Last edited: Apr 4, 2016
J

I thought I'd post an update on this since I finally had a chance to test this out last weekend. I got up early Sunday morning, and went out to the garage to hit the switch on the floating heating element to start heating. (I was afraid to leave it heating overnight on its first trial, but I did leave it floating all night and it did so without problem or cause for alarm).

After it started heating I stuck around for a while (20 minutes or so) to make sure everything was running well. The breaker never tripped, cords weren't getting warm, etc. Then I got called in to the house by my wife to do some chores. Well, next thing I knew it was 1M and I hadn't been back out to the garage to check on it, but when I did it was sitting right at 159F which is where I'd set the temperature controller. So I doughed in, set a big blanket on the cooler and went back in to finish the job I was working on in the house.

So over all, this was a success. The device saved me a lot of time and hassle last weekend. I have a Mozaic IPA SMASH beer that will be the fruit of my reduced labor.

I want anybody reading this to follow best practices, and be safe. I tend to be a little cavalier in my descriptions, but I was quite concerned with safety and I hope others will be to. That being said, it was an easy, affordable, and fun way to shorten my brew day.

Was the heat stick mentioned in your comment above?
J

Good point, this is an old post, and the floating heating element I'm talking about is pictured on the first page. It isn't actually a heating stick.
V

While looking for an electric heating source for my kettle, I saw this post. It's an old post but while shopping I saw this in case someone is still looking for a floating heating element:
https://www.amazon.ca/dp/B07XDHVXF6

virtualpaul said:
While looking for an electric heating source for my kettle, I saw this post. It's an old post but while shopping I saw this in case someone is still looking for a floating heating element:
https://www.amazon.ca/dp/B07XDHVXF6
Click to expand...

What could go wrong? Yea, no thanks. Maybe in a kettle, but not in my daughters bath tub. 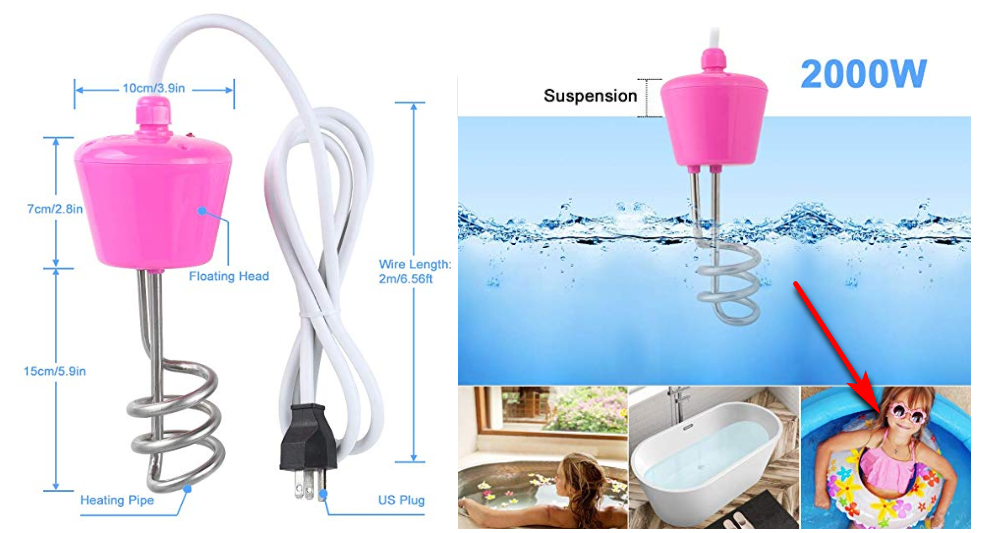 JackBeam said:
....I want anybody reading this to follow best practices, and be safe. I tend to be a little cavalier in my descriptions, but I was quite concerned with safety and I hope others will be to. That being said, it was an easy, affordable, and fun way to shorten my brew day.
Click to expand...