Hey all. New home brewer and long time craft beer fan/local brewery bartender. My first home brew was a NEIPA from a kit which sadly oxidized horribly. I was a bit discouraged but got a mini keg system as bottling was just too much of a hassle, and I think that’s what did me in.

I ended up reaching out to the former head brewer of the brewery I beertend at for recipe help as him and I brewed a hoppy American wheat for my wedding 4 years ago. The idea behind it was something “light” and sessionable but still hoppy and flavorful as we had an outdoor wedding late June in Carolina.

Anyways I just tapped the keg and although not perfect, it came out great! My first successful home brew! A hoppy American wheat ale with New Zealand/cascade hops. Could use more flaked wheat for body and an adjustment to the hop schedule to make the New Zealand hops pop more. But overall I’m pleased with the outcome! 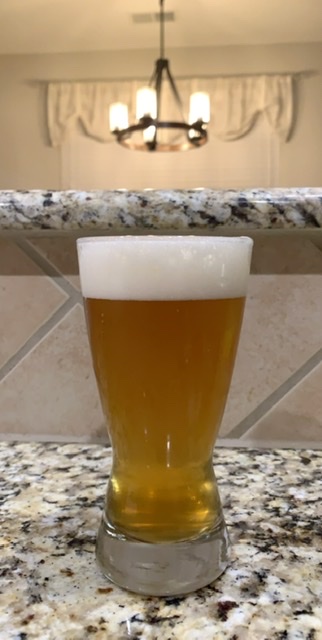 Rock ON, brother Knot! You got me headin‘ for the picnic tap.

Definitely...congrats. Looks nice. And it has also inspired me to enjoy a trip to the kegerator an hour or so early (earlier than usual...)

Nice looking beer you got there.
cheers
OP

Thanks guy! Got a blonde ale chilling and waiting for yeast right now!
Cheers!

Good job, now you just gotta share some with everyone.

Congrats on the first brew!

I wouldn't worry about it not being perfect, they never are. Even the ones that have you beaming with pride, you can still find one or two wee little things that you can tweak. Oh, and what if I...

My First All Grain Brew Day! I'd say successful!