Experience, takeaways, and questions from my first brew day, a DIPA on my 3 vessel HERMs system.


I saved 100 ml of yeast slurry in a mason jar and left the rest out to warm to room temperature for pitching later.

I ended up heating my strike water in the boil kettle and underletting into the mash tun while simultaneously heating the HERMs water in the HLT. Underletting was a great success, no problems getting stuck for the entire duration of recirculation mash.

I started with 9.64 gallons of strike water (heated / mineral conditioned 10 gal) and filled my mash tun to the 11.03 gal line per mash volume required indicated in Beer Smith.

I did not preheat my mash tun, I didn’t think it would be necessary since the grain / mash tun were showing a temperature of 80 F and in Beer Smith, I had estimated it to be at 72. I added my strike water at 154 F as planned and found that I was still below my target mash temp of 148 F. It was initially sitting between 142 – 145 F. I increased the HERMs temp as high as 170 F and ended up mashing between 152 – 154 F the majority of the mash time, allowing the HERMs temp to eventually balance out with the mash. I still need to get my tower of power controller.

My mash PH measured quite a lot lower than intended. I’m not sure what effect that will have. I was shooting for 5.44 and when measured I got 4.8. I did add 70 ml of phosphoric acid (70% of planned acid addition) to my strike water as I read somewhere it is recommended to add some / the majority ahead of mashing and add the rest after testing since it can take 15 min of mashing before a reliable reading can be taken.

I did not read the instructions for my measuring instruments until the morning of brew day and didn’t realize I’d need distilled water to calibrate them so my PH Meter and Brix refractometer were uncalibrated.

I did not add the remaining 30% (30 ml) of acid that I had planned to bring my Mash PH down from my water report value of 7.3 and unadjusted mash PH of 5.73. 100 ml seemed like a lot of acid but I was just going off Beer Smith calculations. I’ve since been informed this is not a good idea.

I did not take PH readings at room temperature, so I may be able to adjust my reading + 0.35, up from 4.8. That makes me feel a bit better.

The false bottom ended up being large enough even though it was too small for the kettle. I did not have any problems with grain ending up in the BK.

I attempted to mash out at 168 F for 10 minutes and started trying to raise the mash temp over the last 15 minutes (before the additional 10 mins of mash out). I got the HERMs temp up over 180 before I started seeing the mash temp rise. HERMs temp reached 190 and it took an additional 10 minutes past my planned mashed time to reach my 168 F mash out temp (bringing total to an 85 min mash). I then continued with mash out for the planned 10 min.

When do you start raising mash temp for mash out? For mash out temp, I’m measuring the total volume temp of my MLT, does heat exchange through HERMs at 190 F impact the wort?

Also, does anyone have issues with melting vinyl ball valve handle wraps? I melted both on my BK and HLT. I thought it happened on the BK because it was touching the heat shield I installed to protect the thermometer face but I noticed the handle also melted on my HLT, as well as discolored the thermometer face that did not have a heat shield. I had to shift the kettles on top of the Blichmann Hellfire burners so that the front sat forward a bit more and melting slowed / stopped a bit. I wasn’t even running them at full power.

Next and biggest issue IMO, I expected a pre-boil volume of 7.25 gal and I only got 6 gal into the BK. Having done a no sparge, adjusting with a larger grain bill and a high water to grist ratio, I’m not sure how much of this was due to additional, uncalculated grain absorption or lost as unrecoverable in my HERMs recirculation system.

I also boiled off way more than my hour water boil test. I believe humidity may have played a role in that. When I did my boil test, it was about 50% humidity and I boiled off 1 gal over an hour.

Today was around 18% humidity and I boiled off almost a gallon in the first 15 minutes so I put the lid on for the remainder of the boil to try and keep as much wort volume as possible in the kettle. I read a Brulosophy article that indicated no adverse effects to boiling lid on.

The boil stopped briefly sometime between my 15 and 10 minute additions because I had previously turned the gas down a bit and thought it was good. I immediately brought back to boiling / 220 F within 1 minute and had a large foam up / small boil over.

Is it possible to have a second hot break? I witnessed a hot break already happen once when the initial boil was reached however I didn’t notice much in the way of trub floating around the first time. After the boil over, I believe it caused some hop matter to come out of the nylon bag I was using but when I emptied that bag during clean up, there was still so much hop material in there, it almost seems like it was all hot break.

I did not add fermcap-s during the boil. I hadn’t been worried about it with so much head space doing a 5 gal batch on a 15 gal system but I think having the lid on impacted that and caused the boil over.

After flameout it took 3 minutes to drop to a whirlpool temp of 194 F. No additional temperature control was applied after whirlpool additions were added. I let the temperature continue to fall naturally over the 15 minute whirlpool, ending at 122 F.

The chill water temp was 65 F and the wort began at 118 F, reaching a temperature of between 88 an 82 F after cooling straight into the fermenter (measured by thrumometer).

After boiling / whirlpooling there was about 4.5 gal sitting left in the BK. I probably got somewhere between 4.25 to just under 4.5 into the fermenter. All the trub went into the fermenter minus the hop matter contained in the nylon hop bag.

I placed my carboy in the fermentation chamber to continue cooling while I finished cleanup.

I pitched at around 75 degrees (room temp should have been around 72 F) and added 2 dropper fulls of fermcap-s. The instructions said something like 2 drops per gallon but I didn’t know if it meant 2 drops or a dropper full and when I added it as an ingredient in Beer Smith, the standard was 1.1 ml so I wasn’t really sure and 2 droppers just felt right.

I was exhausted after cleanup and I forgot to aerate before pitching but remembered after like an hour so I used an aquarium air pump for 10 min.

Speaking of being exhausted, this is a lot of work. Now I understand why people are always trying to brew the largest batch that they can cuz dang ya gotta make it worth your time.

I had the temp controller for the fermentation chamber set to my target fermentation temp. When I taped the temp probe to the side of the carboy, this caused the chest freezer to run for a long time, dropping the temp inside down to 37 – 40 F until the carboy temp evened out with the freezer. I hope there are no negative effects of this. Next time I was thinking about letting the temp probe sit in the chamber for a day and not taping it to the carboy until it had a chance to level out with the set freezer temp / ferm temp more gradually.

I had intended to under pitch this a bit with Conan but now the numbers might actually even out with the lost wort volume vs intended batch size.

How important is grain mill cleaning? I didn’t get super in depth with that beyond brushing off the dust.

Can I reuse nylon hop bags?

I had not realized my fermentation chamber would smell kind of fruity. over 36 hours into active fermentation now.
H

You should visit the BIAB site, most of us are done in 4-6 hours depending on style and gravity. IMHO you spent a lot of money to make a lot of work to make beer. Just remember almost any system can make acceptable wort, it takes firm control of fermentation to make exceptional beer! A firm grasp of water doesn't hurt either.
OP

hottpeper13 said:
You should visit the BIAB site, most of us are done in 4-6 hours depending on style and gravity. IMHO you spent a lot of money to make a lot of work to make beer. Just remember almost any system can make acceptable wort, it takes firm control of fermentation to make exceptional beer! A firm grasp of water doesn't hurt either.
Click to expand...

Yes if I was going to do it all over I probably would go with a BIAB system from Claw Hammer Supply.

I'm happy with what I have though, I have many options now for the method in which I use to brew. One of which being a no Sparge full volume mash with recirculation through HERMs. I just need to work on my efficiency though I feel I still got relatively close to my target gravity doing the recirculation with adjusted larger grain bill and higher water to grist ratio.

I'm definitely open to suggestions though besides getting more equipment for BIAB.

My water additions are in my initial post, I'll post a screenshot of my water profile below.

I've recently been informed that beer Smith isn't the best for water calculations. 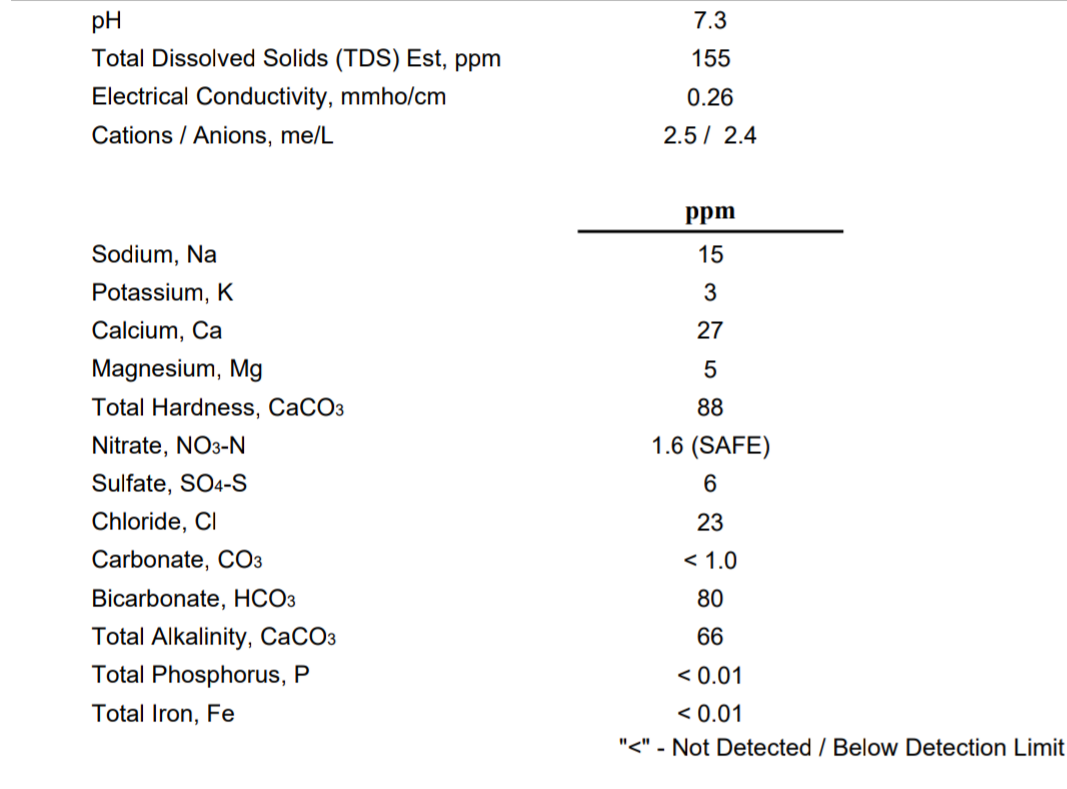 I'm Friken jealous of that water. Be careful the hole here is pretty deep,and I'm down a couple fathoms. May i suggest Palmer and Kaminski's Water book. Calcium is the driver in my water profiles,and I like to keep it 50 to 100 ppms. With this water you can just boost the Cl or the SO4 depending on style to get there. I adjust my pH with acidulated malt and 66 ppm alkalinity would need around 1-2%,again depending on style. I like my lighter beers like Kolsch, Pils, APA, ect around 5-5.2 pH
OP

hottpeper13 said:
I'm Friken jealous of that water. Be careful the hole here is pretty deep,and I'm down a couple fathoms. May i suggest Palmer and Kaminski's Water book. Calcium is the driver in my water profiles,and I like to keep it 50 to 100 ppms. With this water you can just boost the Cl or the SO4 depending on style to get there. I adjust my pH with acidulated malt and 66 ppm alkalinity would need around 1-2%,again depending on style. I like my lighter beers like Kolsch, Pils, APA, ect around 5-5.2 pH
Click to expand...

I'm in South Korea, I wasn't aware I had good water but I guess that makes up for the crap air quality.

I adjusted for a hoppy pale ale / IPA profile. Didn't exactly nail pH though. I'll get it next time. I also added baking soda because beer Smith told me to but I've been informed in another topic that adding bicarbonate has no value.
You must log in or register to reply here.
Share:
Facebook Twitter Reddit Pinterest Tumblr WhatsApp Email Link

U
Is post boil pH not as important as mash/sparge pH?

Help!Quick! My mash pH too low