I have just started my first batch of cider today! I used 6 gallons of Louisburg cider (pasturized, but no preservatives) bought at my local HEB grocery store. I sanitized everything, poured in the cider, and added 1 Tbsp of pectic enzyme (1/2 tsp per gallon). I'm letting it sit for 24 hours and then pitching my yeast tomorrow. I'll be using Lalvin D47 yeast. I'm keeping it simple with this batch as it is my first. I'll use GoFerm to rehydrate the yeast, then Fermaid O for yeast nutrition added using the TOSNA 2.0 schedule. I'm going to take a gravity measurement before pitching and will add brown sugar if it looks like it needs it. Since I have read that it is OK to let cider sit on the lees for up to 6 months I will probably only use primary fermentation and bulk-age in the same until kegging in time for Christmas. 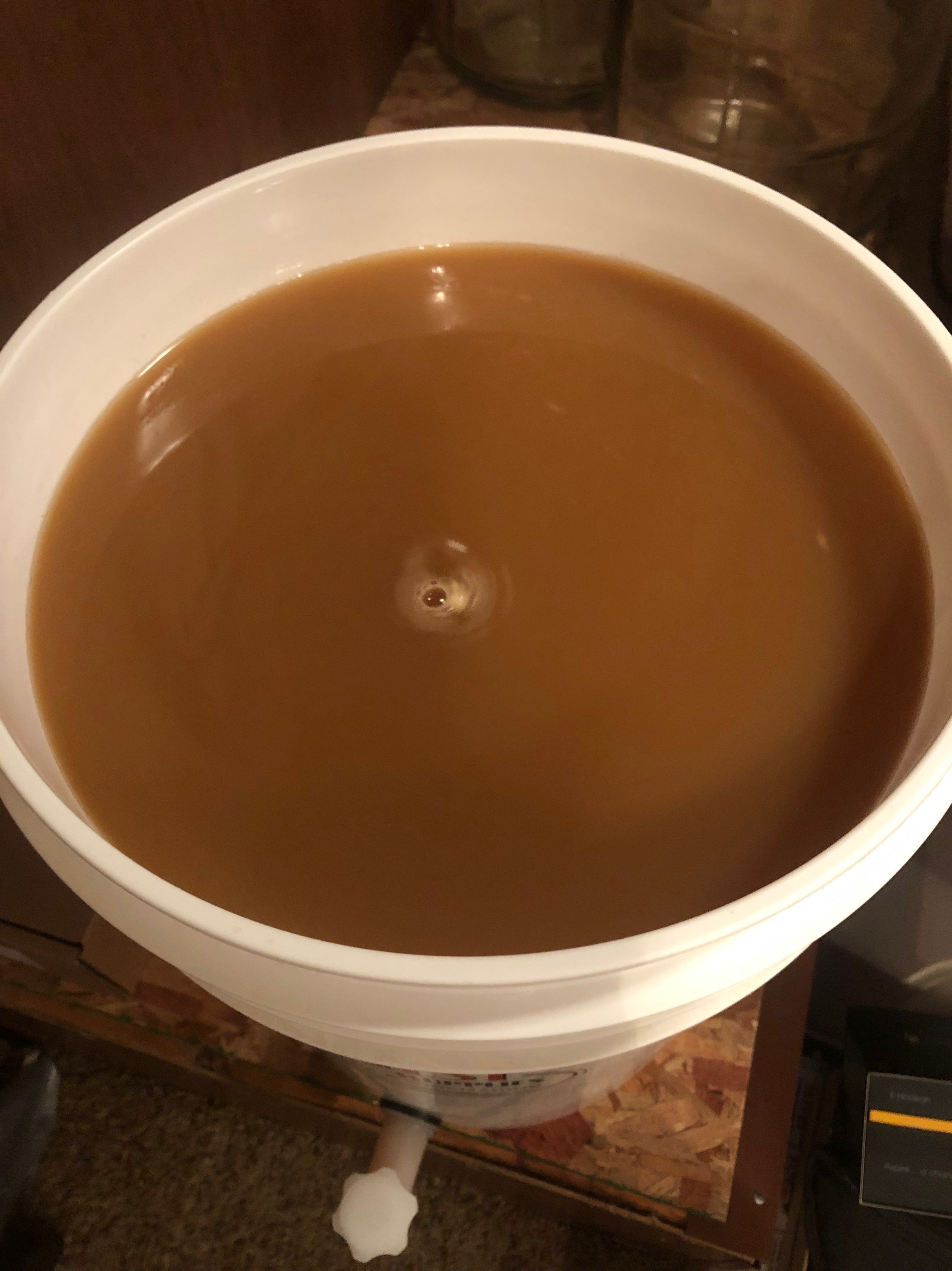 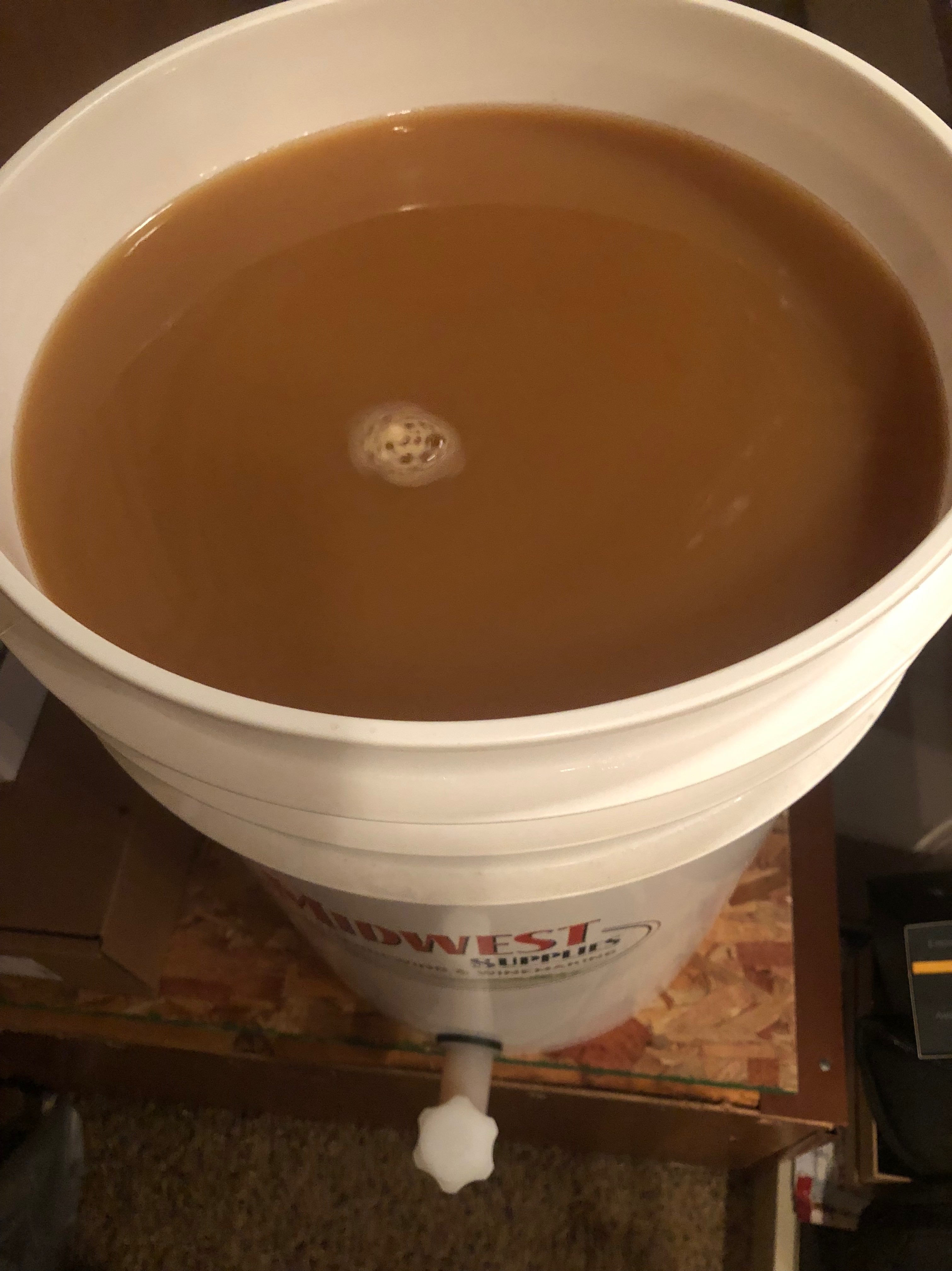 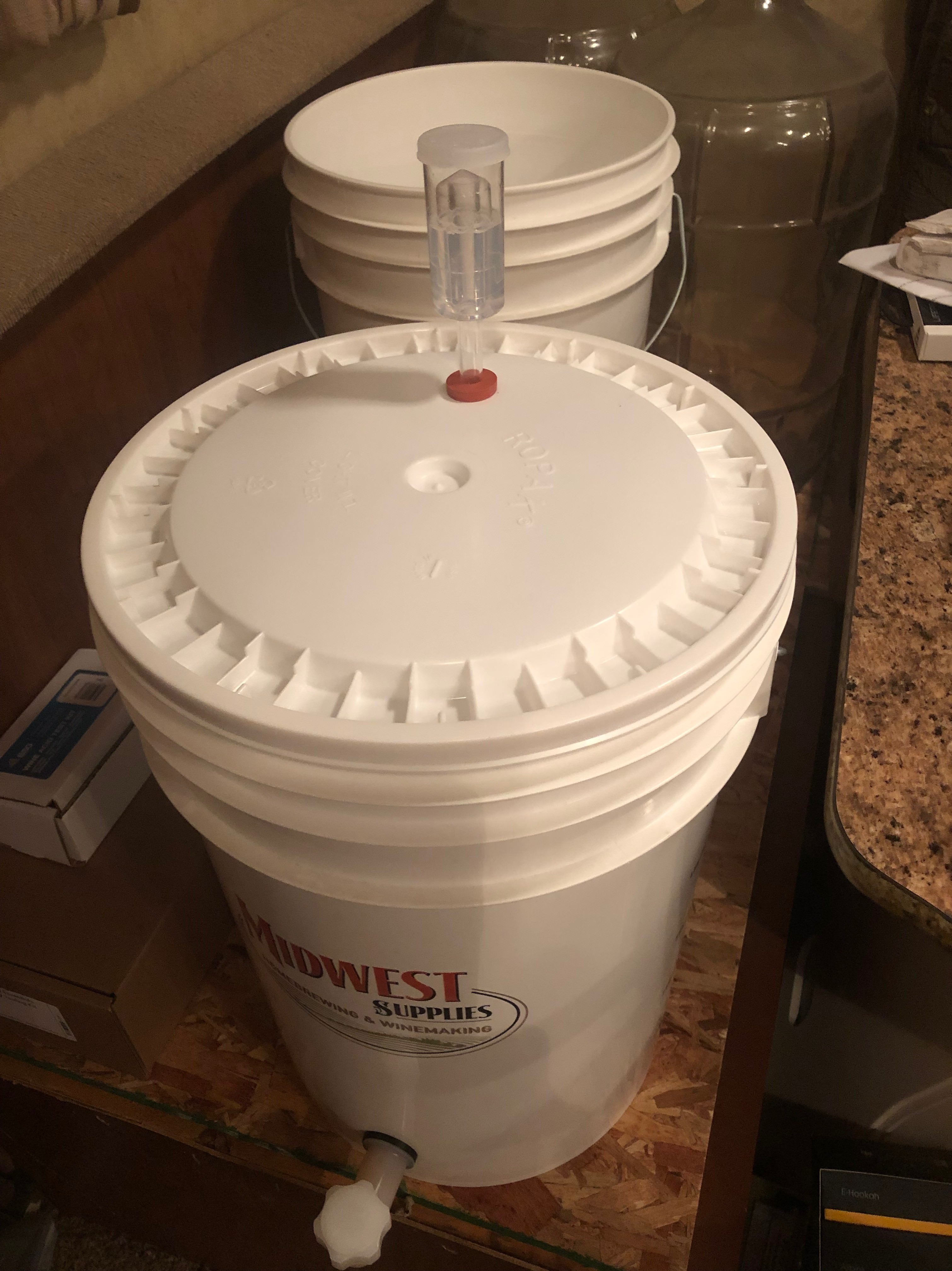 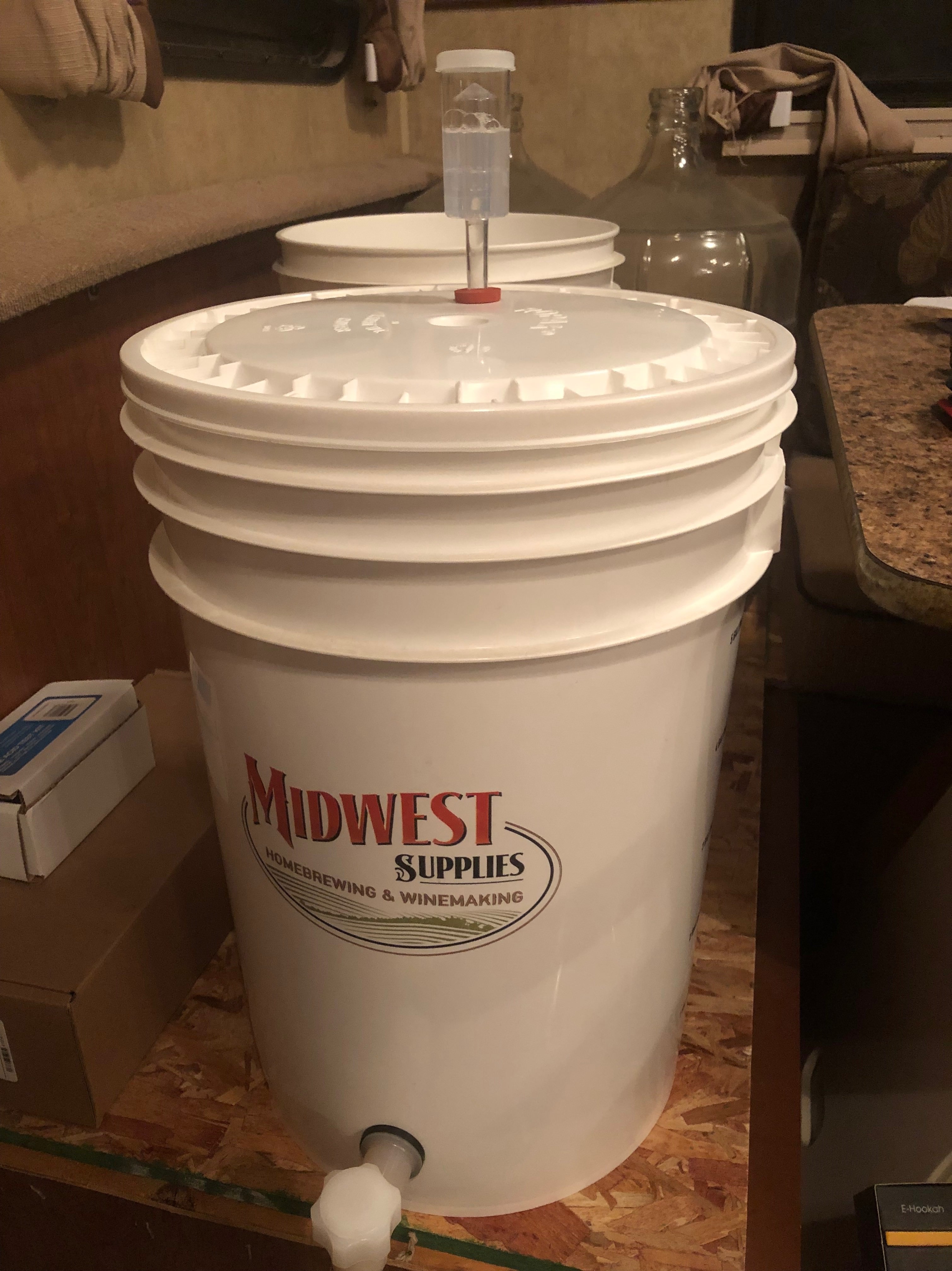 Note that TOSNA added nutrients should be reduced by 50% since fruit juice contains nutrients.

I would suggest to not add brown sugar, at least for one batch to get a baseline.

Buckets aren't great for long fermentation because of the oxygen exposure (they leak, have a lot of headspace, and are more highly oxygen permeable than other materials).

Consider using sulfite to reduce the oxidation during aging as well.

Looks like you have extra carboys in the photo, you MAY want to split the batch and try other yeast like 71-B or a beer yeast.

I ferment D47 batches in low-mid60s...for about 4 weeks and then cold crash.

RPh_Guy said:
Note that TOSNA added nutrients should be reduced by 50% since fruit juice contains nutrients.

I would suggest to not add brown sugar, at least for one batch to get a baseline.

Buckets aren't great for long fermentation because of the oxygen exposure (they leak, have a lot of headspace, and are more highly oxygen permeable than other materials).

Consider using sulfite to reduce the oxidation during aging as well.

Thanks for the tip about reducing the nutrients! I didn't know about that. I was planning on adding the brown sugar to get a high enough OG to end around 7%ABV, but if you think it would be better for me to set a baseline this go-round then that certainly simplifies things for me.

I'm only planning on aging in the bucket for a short while before kegging, but I can always transfer to one of the carboys I have. I will be using potassium metabisulfate at the end to reduce oxidation.


madscientist451 said:
Looks like you have extra carboys in the photo, you MAY want to split the batch and try other yeast like 71-B or a beer yeast.
Click to expand...

I have two 6.5-gallon buckets and two 6.5-gallon carboys. I bought them two years ago when I was originally planning on making mead (which I still intend to do), though I had done far less research then and may have over-bought size-wise. I am considering purchasing a pair of carboys in 5-gallons for use in long-term aging. As for the selection of the Lalvin D47 yeast, that was based off of a recommendation by a local friend who has, over the years, come to use it rather exclusively in the cider he makes. I figured it wouldn't hurt to give it a go and see how it turns out (I do love how his cider tastes). Since I have the equipment to spare, I have considered setting up a second batch with a different yeast while I wait to get out to the local apiaries and try their honey in preparation for making my mead.

I ferment D47 batches in low-mid60s...for about 4 weeks and then cold crash.

I live in an RV, which means keeping the temp a bit on the cooler side is rather easy (it gets a bit cold rather easily these days, lol). I've been toying with my thermostat the last two weeks to figure out how to keep the temps in the mid-60s all day. Because I live in an RV though, I don't have a large enough refrigerator to cold crash. If the outside temps keep staying as cold as they have though, I may only need to set the batch outside for a couple of hours instead. My outdoor temps this week have been that of a walk-in cooler, and nearly of a walk-in freezer, lol.
OP

The pectic enzyme didn't clear anything up yet, but I don't know if that is because I started with pasturized cider or because it happens as the cider ferments. I don't particularly care if this batch doesn't clear up, but I figured it would be worth the time to experiment.

I followed the instructions on the D47 packet and the instructions on the GoFerm package to rehydrate the yeast. I pitched 5g of yeast since Lalvin says it's good for up to 6 US gallons. I've got the room sitting at ~64 degrees, and I am considering dropping it down a little more. The OG was 1.050 as far as I can tell. Hoping to see some activity within the next 24 hours. I'm excited! 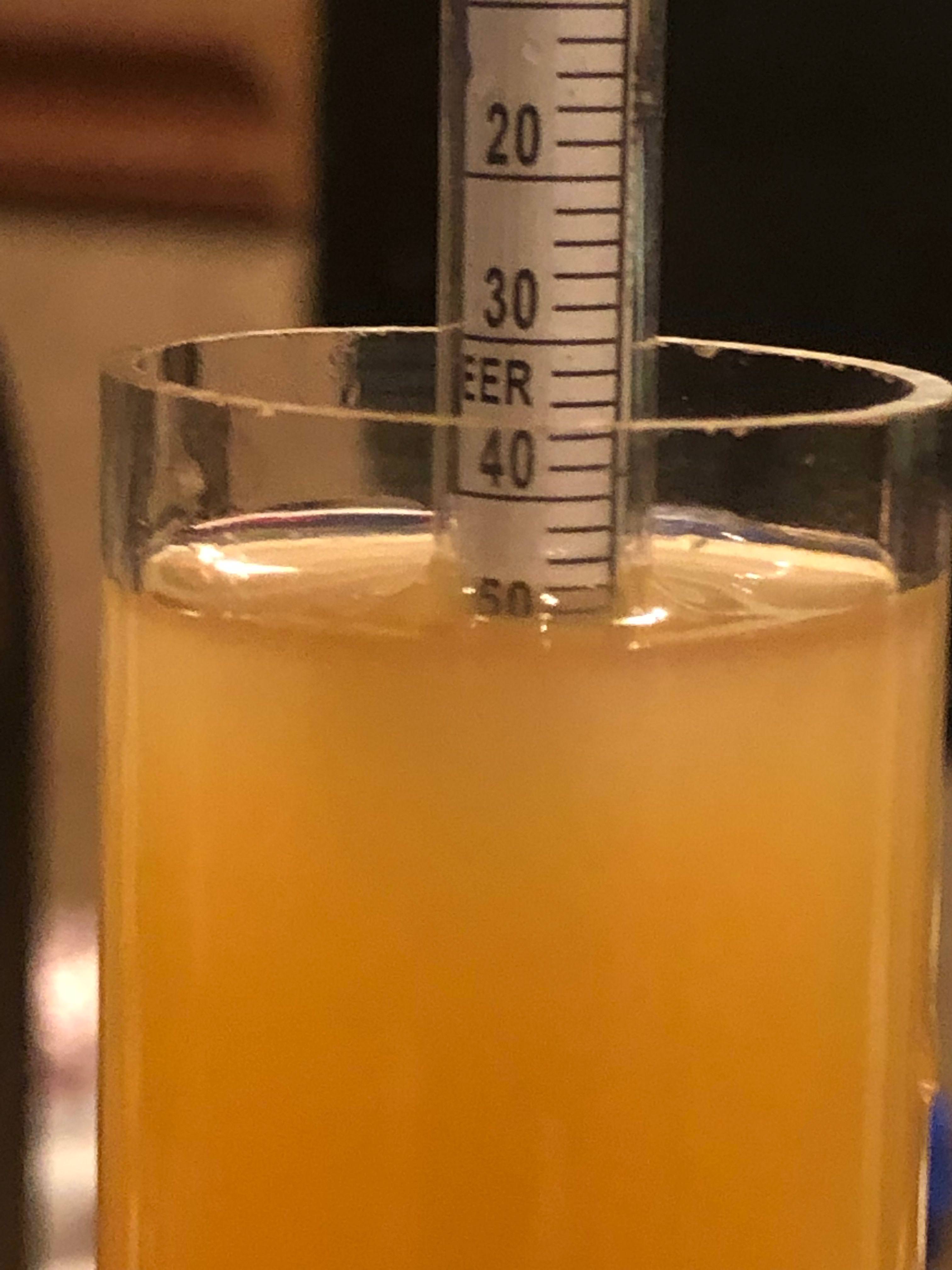 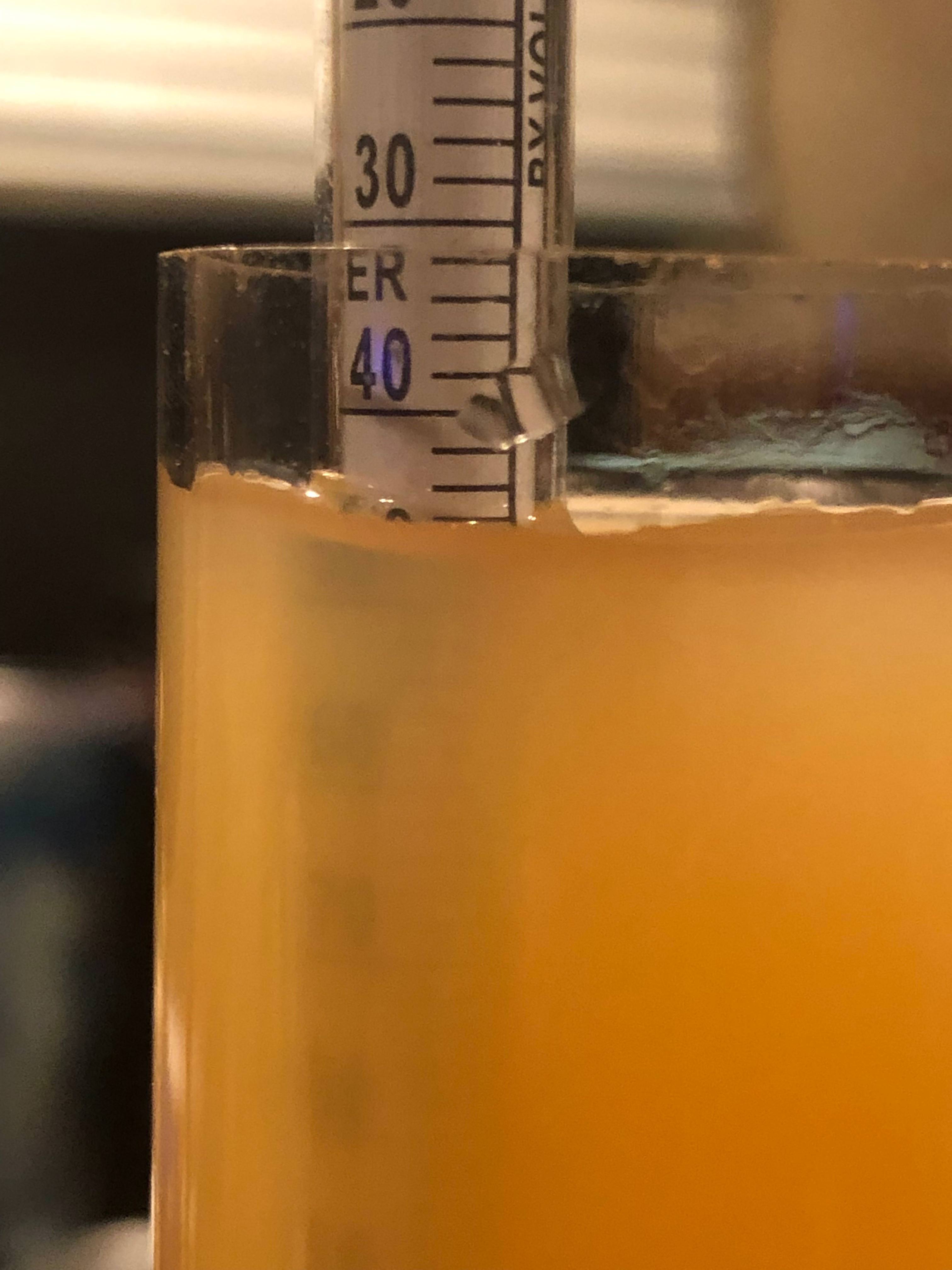 I would read that at 1.048 (and adjust based on the calibration temperature). It should finish between 6-7% ABV.
OP

I would read that at 1.048 (and adjust based on the calibration temperature). It should finish between 6-7% ABV.
Click to expand...

Cool! This is my first time using a hydrometer, so thank you for the reading adjustment. I'm sure that in time I'll get the hang of reading it. I was hoping for a final ABV around 7%, so if it even gets close I'll be pleased with it.

EDIT: I just added the first bit of Fermaid O, though I've seen nothing happen in the first 24-hours. I'm thinking that is due to the temperature drop last night combined with the fact that I ran out of propane overnight and my ambient temp inside this morning was 53 degrees F. I've fixed that issue, gotten the temp back to 65F, aerated the must, and added 1.47g of Fermaid O. Hopefully I'll see some activity within the next 24-hours.
Last edited: Nov 14, 2018
OP

UPDATE: Houston, we have lift-off! I now have activity! My yeast seems to have started fermenting while I was at school today. I came home to see a slow, steady bubbling in my airlock. I upped the temperature last night to 70F and the current ambient temp in the room is 72F. Apparently that made the difference, or the lag phase just took a bit because of my temp drop the first night. I'm super happy! I'm going to keep the room temp stable and when I add my next dose of Fermaid O tonight I'll pull the temp of the must to see what it is in compairison to the ambient room temp. 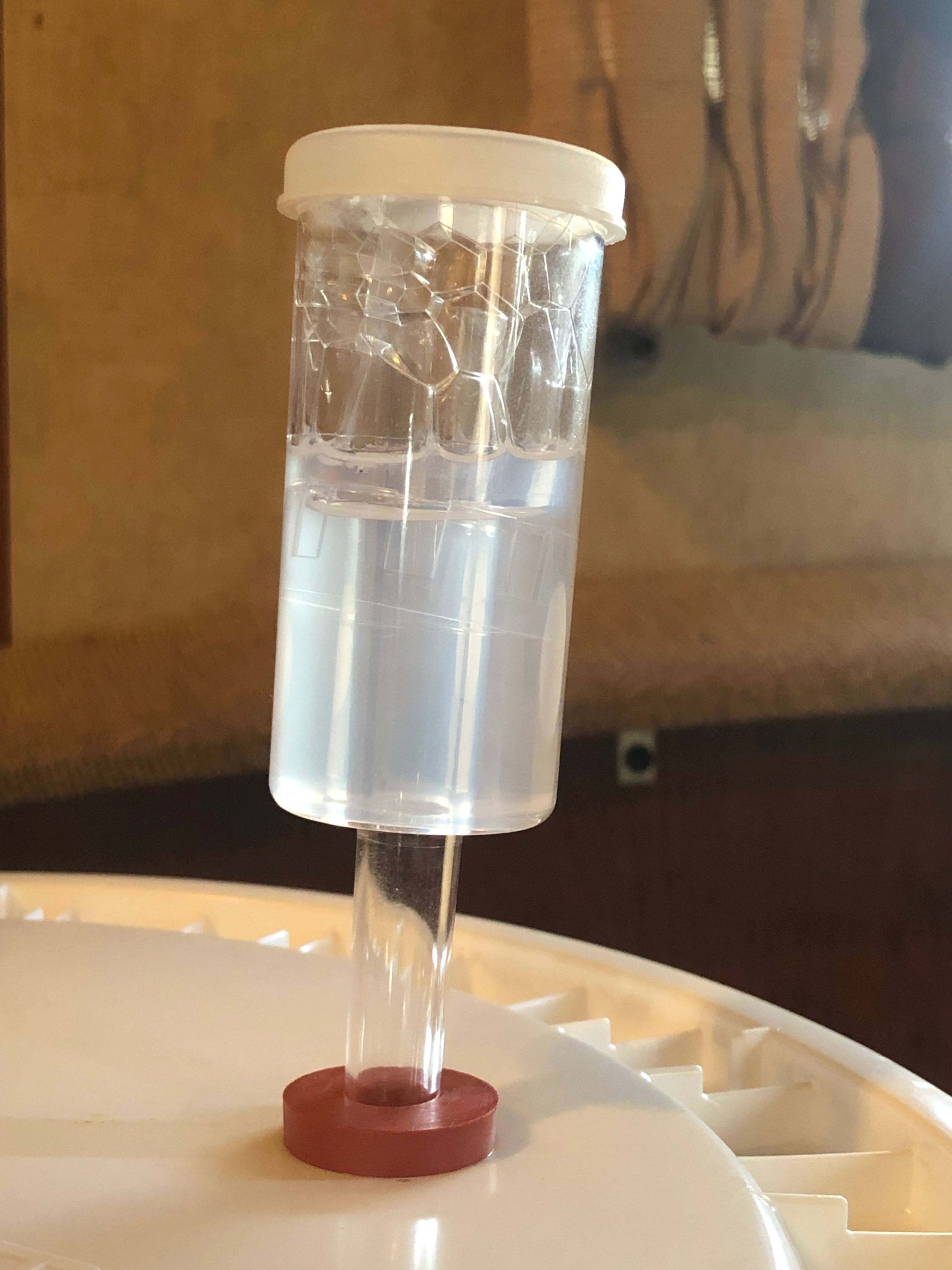 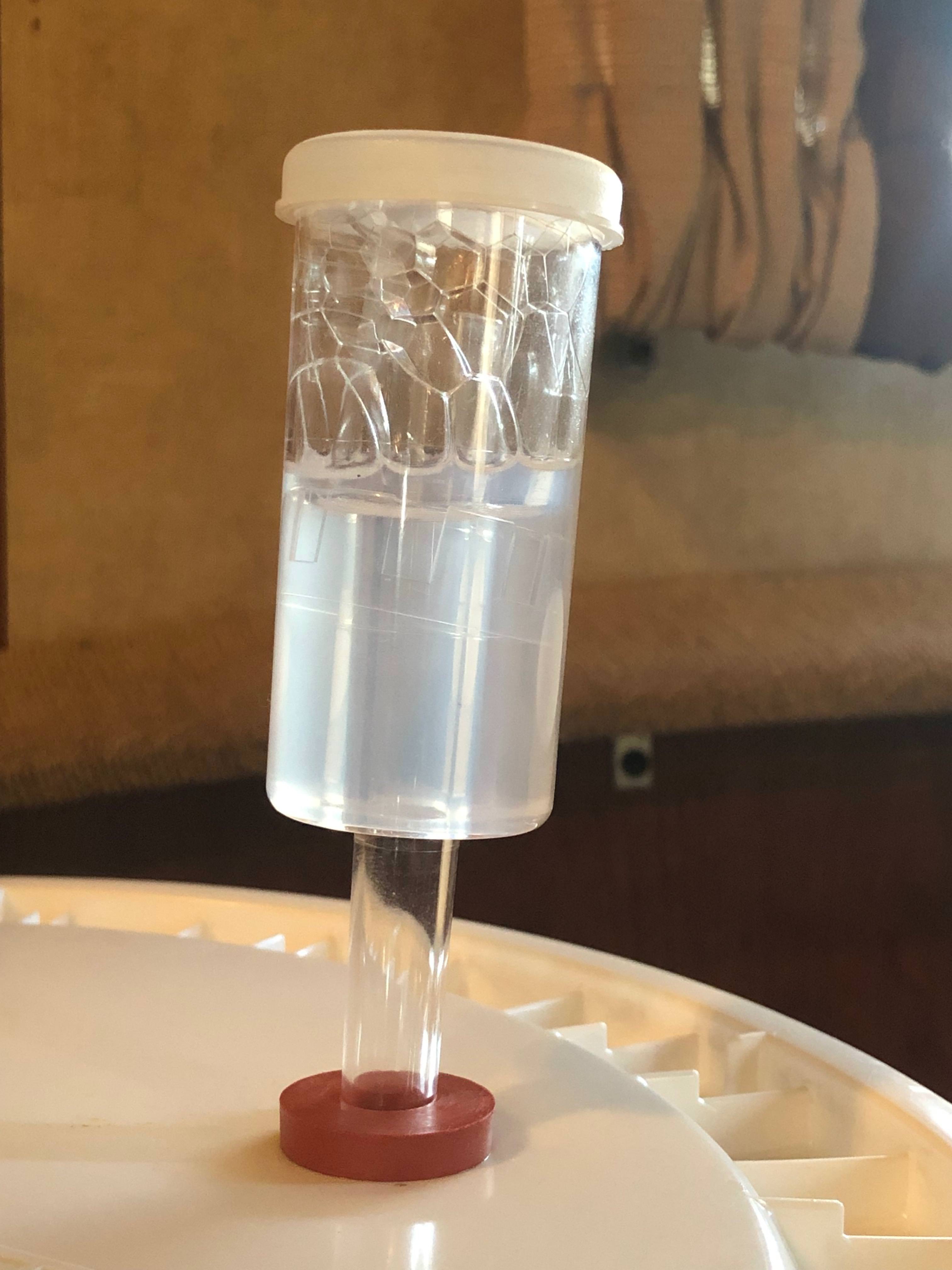 Thanks! I'm planning on dropping the room's ambient temp slowly, and it should be back to ~64F by this evening. It will be interesting to see how the must's temp compairs to the ambient room temp by then. I suppose I could go read up on thermodynamics and learn about the rate of change of temperature in a given liquid, but I am not that motivated to do that this close to the end of my semester and graduation. Guess I'll save that research project for when I'm out of business school and bored, lol.
OP

UPDATE: Racked Off Into Secondary

I have just racked my first batch of cider off into secondary. I had no airlock activity in the last 48 hours and so I chose to rack off today. I expected to lose about 1/2 gallon in my attempt to avoid siphoning out the yeast sediment and that was about right on point. I siphoned the cider into a 6.5-gallon glass carboy and added one gallon of the original cider I kept in reserve to decrease the headspace in the carboy. I now have very slow activity in the airlock, though I expect it will pick up for a day or so with the added sugar of the new gallon of cider. 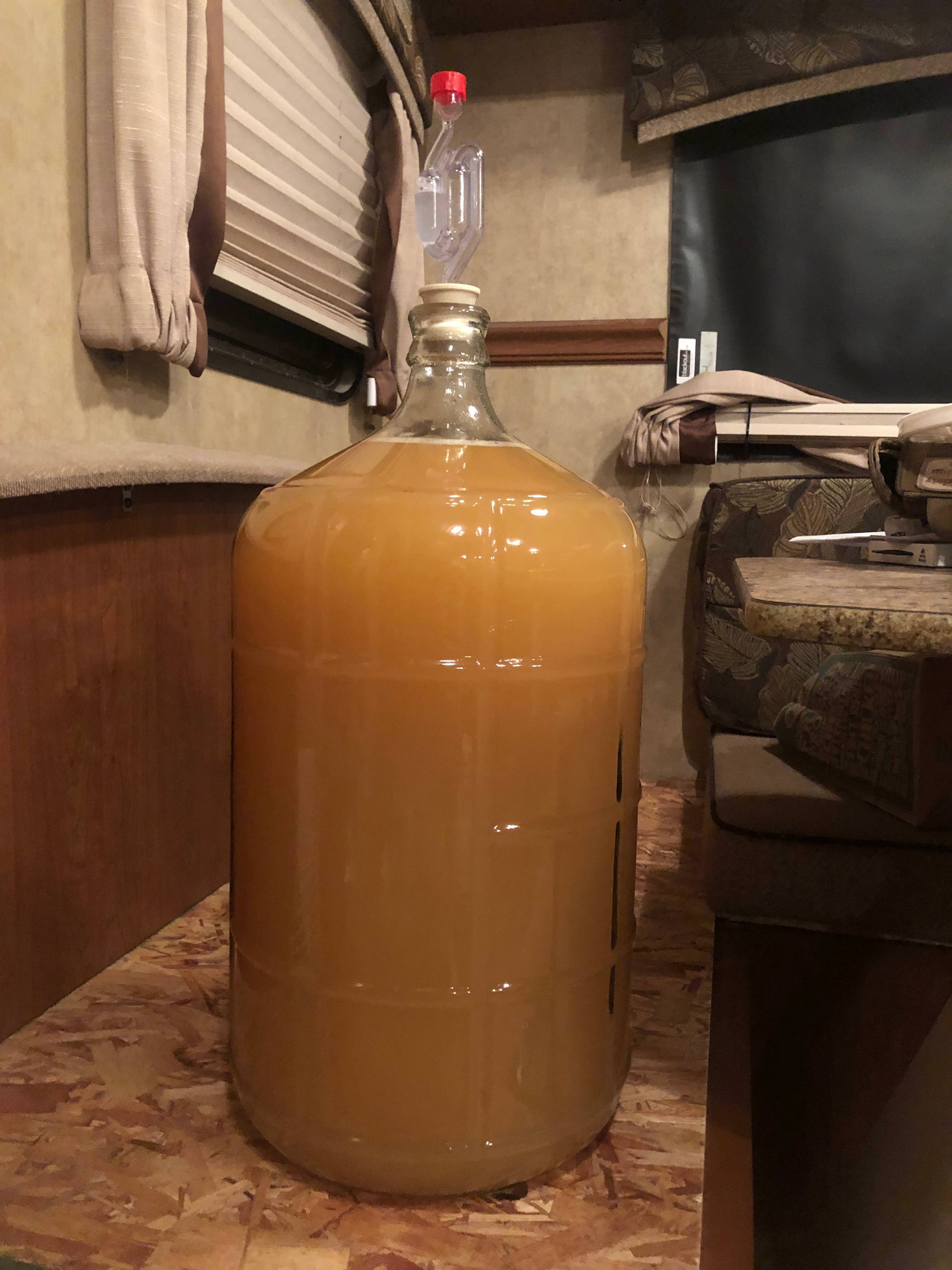 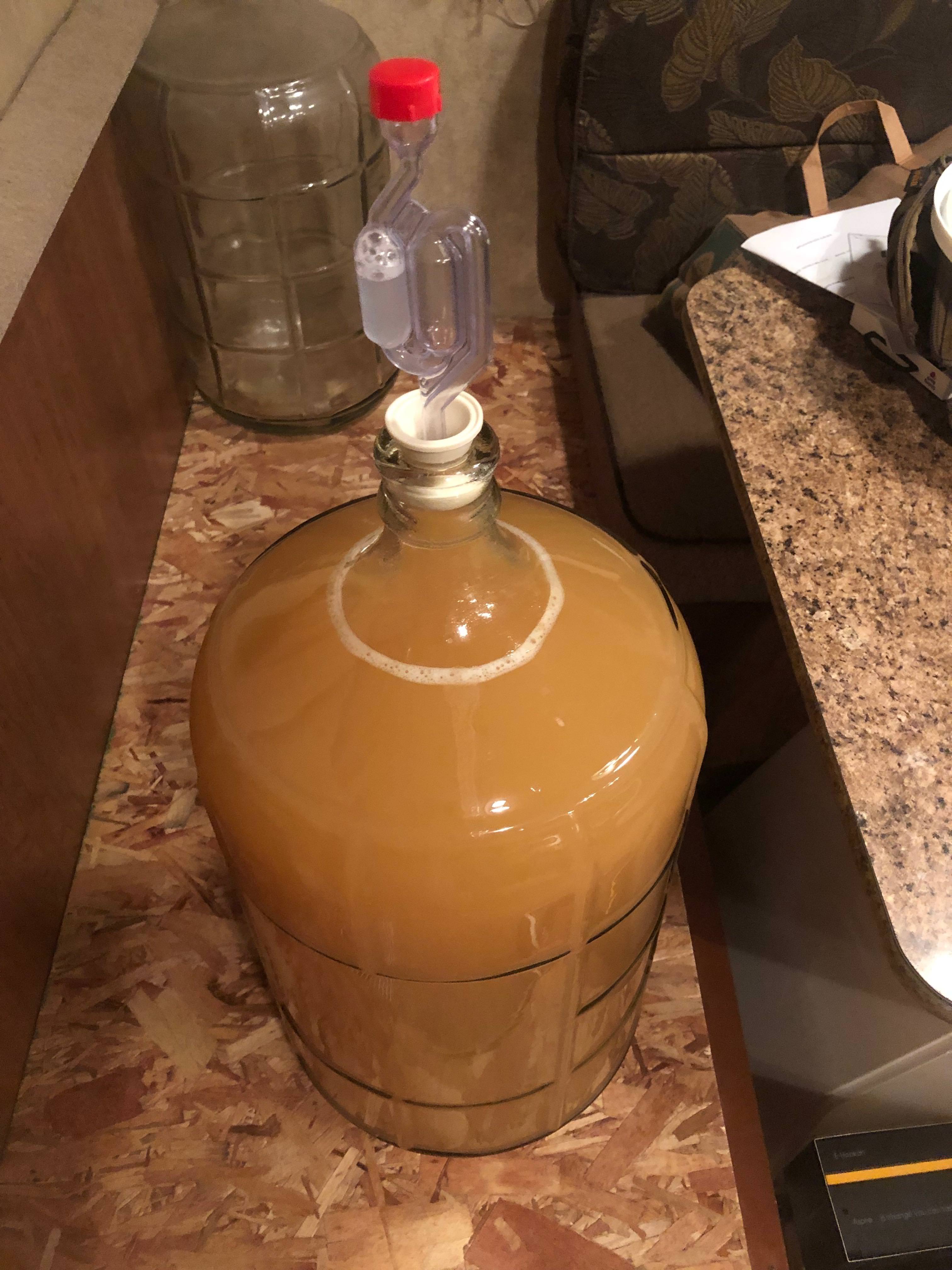 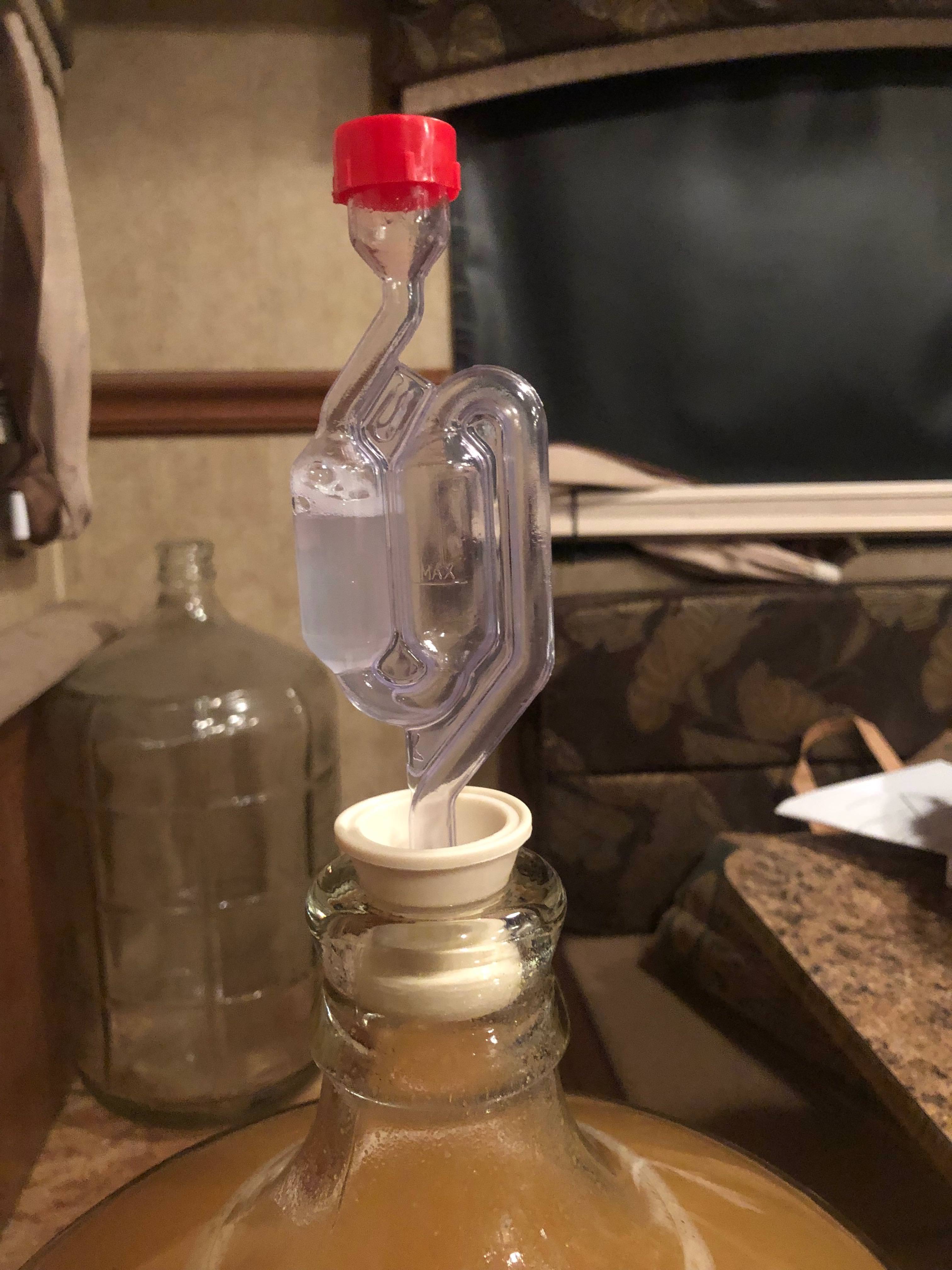 B
Just started my first batch of cider

Aug 25, 2008
brewmeone
B
A
My first batch of cider, started yesterday