Finally! New Brewing System That Can Brew A Single Pint of Homebrew

The BrewBro is a revolutionary brewing system that we're launching in April of 2018. What makes this system so groundbreaking is 3 factors. First, it has three phase fermentation. This means that you have your standard fermentation, a secondary fermentation, and an optional third phase; cold lagering. Second, a revolutionary process we call active oxygenation. We know how important it is that your beer gets lots of oxygen throughout the entire brewing process. Our system infuses oxygen into the fermenting beer all the way from the yeast pitch to bottling. Lastly, it brews a single pint of beer.
Sometimes, you don't want 1, or 3 or 5 gallons. Sometimes you just want a single beer, you know? So that's why we made this system. So I can hone my craft to brewing the perfect pint... literally. 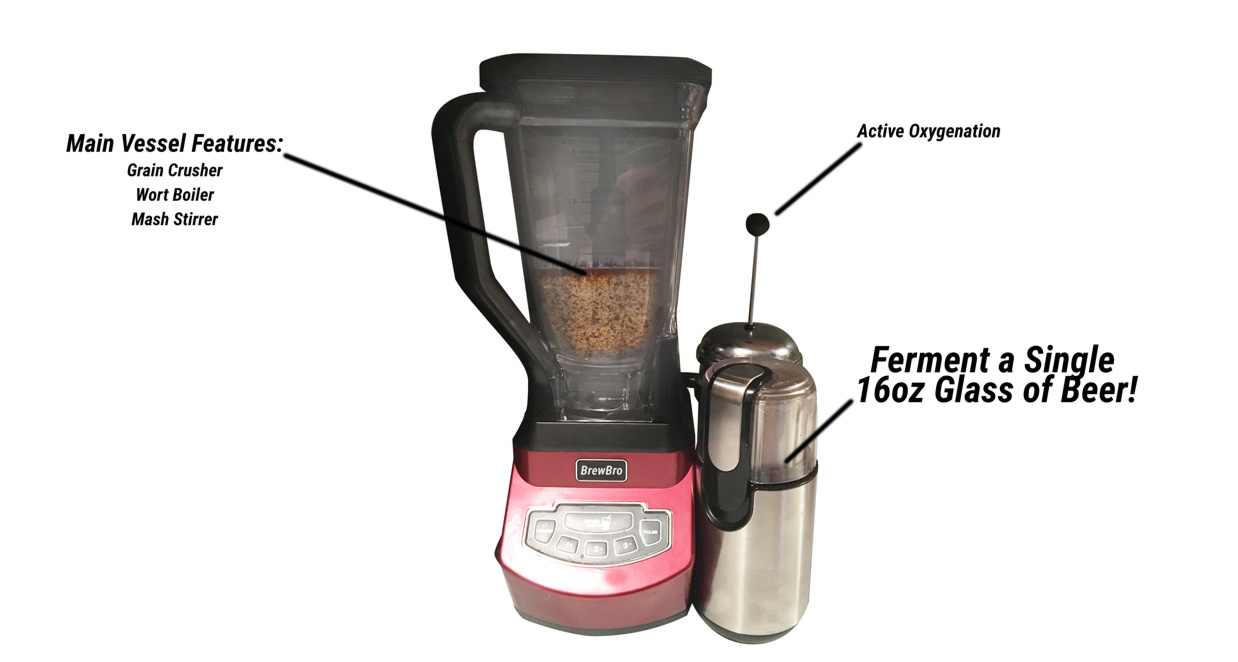 The main vessel is where the brewing magic happens. Add uncrushed grain to the top of the tower. The system handles the rest. First it crushes the grain with it's NinjaBladeTM tech. It ensures that each kernel is split perfectly down the middle. This guarantees between 25-30% efficiency. The center of the tower is the heating element which boils the grains and wort to make sure you get the maximum flavor in your pint of beer. Next, the beer gets transferred through the oxygenator, and then into the fermenter cup. As fermentation begins, CO2 is forced out of a valve. The negative pressure sucks air through a hepa filter, creating the ongoing oxygenation of your beer.


How Can I Get a BrewBro Brewing System of My Own?

BrewBro is launching on April 1st, 2018 for the early-bird price if $3895.00. Pretty reasonable as the final price will be just shy of $5000. If you're interested in spending just as much time brewing 1/50th of the beer in a standard batch, the BrewBro is for you.


" Sometimes you just want a single beer, you know? So that's why we made this system. So I can hone my craft to brewing the perfect pint... literally."

It may sound like a major investment, but when you see how the finished beer comes out, Myself and Ted agree that you'll be brewing your own single pints of beer in no time! You can order your BrewBro brewing system at www.homebrewtalk.com/AprilFools.html

Trick Your Friends With These Other Great April Fools HBT Articles:

Nice, but I'm going to wait for the BrewBro model that has bluetooth and wifi connectivity.
Pre order is in thank you so much for this. I have been waiting so long for a system with these features.
Hahaha, you almost got me Well done, David!
Happy April fools day, everyone!
If this brews a pint in 10 minutes I'm in for two!!
That looks great. Will you be making a metric model so people outside the US can make beer?
I'd get one, but, sometimes a pint is too much. Will you be offering a half-pint version in the future?
"The negative pressure sucks air through a hepa filter, creating the ongoign oxygenation of your beer."
Oxygenation during the fermentation? This not looks good to me.
Test batches for one gallon brewers!
I was having trouble getting the proper amount of oxidation in my NEIPAs. This system should solve that, no problem! Thanks BrewBro!
This is also called a yeast starter.
For five grand, I'll buy a complete brew sculpture that makes 10 or 15 gallons. The setup and cleanup alone is a lot of trouble. I predict the demise of this company.
If your time is worth $10 an hour, each pint would cost at least $50 with this system. I just upgraded from 10 gallons to fifteen. Small batches aren't worth the time unless you are fanatic about entering contests. A one pint brew would even make enough beer to enter a brewoff.
I will keep coming back just to get my Steven Morgan fix...
More cowbell.....err I mean Steven Morgan.
If it only came with a UV light to sanitize your finished beer, I'd be in.
Great blog. I read your post. The way of providing the information is too good. I really enjoyed your post. Great work. keep on
You must log in or register to reply here.
Share:
Facebook Twitter Reddit Pinterest Tumblr WhatsApp Email Link