HBT! I've been away a long time, but I've been busy!

I just wanted to share pictures of my keezer that I could have never finished without help from the awesome people here. Not bad for a completely amateur woodworker if I dare say so myself. Even the pre-wife (who doesn't like beer) thinks it'll be a good addition to the bar. Now I just need some buddies to help me move it down stairs.

Special thanks to BrewPastor, Jester and all of the other keezer builders who came before me for the inspiration and guidance!

Now time to get

Nice!! I really like the tile on the backsplash.

I'm terrible at documenting builds. I actually had a lot of in-progress pics on my iPhone but loaded up the Beta of OS4, had problems, and lost a lot of them that weren't backed up.

Here's what I do have:

After that, I attached 1/2" plywood to the frame and bolted a 3/4" piece of plywood to the top that was roughly the shape of the counter top. I built the coffin box out of 1x1/2s and 1/2" ply.

I veneered the bottom with a maple veneer and got to work on the mahogany trim. This was by far the biggest pain in the ass of the project. The mahogany I got, while beautiful (these pics don't do it justice - it's absolutely gorgeous up close), wasn't cut square at all. As a result we had to come up with ways to get square pieces and spent many, many hours cutting it down. I also routed a shallow depression for the drip tray to sit in in the top of the plywood so it would be level with the tile.

The coffin box contains a PVC T that was built and insulated with insulation tape and copious amounts of electrical tape (the insulation tape didn't stick well). There are 4 holes in the freezer lid that are just big enough for the beer lines. They come up into the PVC and are then routed to the taps.

Like most, I used a Love temperature controller. I debated where to put it with my friend that was helping me with the build for a week. I wanted it in the side of the coffin box to make it accessible and give the keezer a high-tech feel. He said that would ruin the aesthetics of all the work we'd just done. Finally after getting several other opinions, I wound up agreeing and just velcroing it to the top of the hole in the back of the freezer where the compressor sits. I may still move it out to the side of the coffin box one of these days while he's not looking. :cross:

Overall the build took us about 3 months, but that makes it sound like much more work that it was. We both have very busy schedules and wound up only having Tuesday nights and a few weekend days here and there to spend on it. If it weren't for that mahogany being so expensive, total build cost would have been ~$800 - $900. I wound up spending about $400 over that on the wood.

Looks great, Sol - I'm jealous that yours is done!

I started mine about a month ago, and progress has been horrifically slow. The brewstand I built was slow, but a pleasure - this has just been a nightmare. I made a complete mess of the first counter, the first coffin I made looks great but it turned out to be an inch too low, and no matter how slow and precise I am at making sure my measurements are balls on (measure eight, cut once!), the trim around the outside of the lid won't match up to save it's life!

Looks nice dude. I like the tile work looks realy clean. How long was the build?

brownsbrews said:
Looks nice dude. I like the tile work looks realy clean. How long was the build?
Click to expand...

Thanks! Overall build time was 3 months, but work on it was very here-and-there. If I had to estimate the number of hours I'd put it right around 65. Keep in mind that I'm an amateur at best when it comes to working with wood. Somebody a little more handy would have finished this a lot quicker. It would have also shortened the build time if I had actually made plans ahead of time. Most of what you see is me saying "well, maybe we should do it this way".

How do you get stuff in and out of there? Do you have to remove the whole top?
P

Coming from you, that's the best complement I could hope for. When people ask me how I built it, I just point them to your thread. I've shamelessly ripped off your R&D but will certainly give credit where credit is due.

weirdboy said:
How do you get stuff in and out of there? Do you have to remove the whole top?
Click to expand...

The top uses the freezer's hinges (was worried that they'd be strong enough, but they're holding up just fine) like Jester's. Here's a pic of his opened: 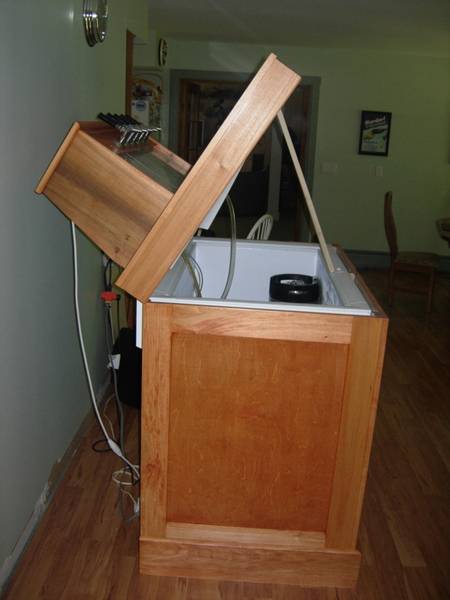 Thanks gents! It's been a blast to build and even more to drink from!
S

Dang, I was thinking about just building a collar for keezer, now ya got me thinking.

Sol said:
Thanks gents! It's been a blast to build and even more to drink from!
Click to expand...

The latter I can imagine; the former? From personal experience? Never again!!
OP

Finally, officially broke her in over the long weekend. Killed the better part of the capacity of the keezer (20 gal) of homebrew with the help of a couple dozen friends (I've got < 4 gal left). Thankfully, got good reviews on the beer as well as the keezer. Now back to brewing to stock 'er back up. Thanks again to all the HBT'ers that helped throughout the process!

I'm jealous, brother! I FINALLY finished mine, but... not so fast. Two of my Perlicks will NOT seal whatsoever, in fact one of them has a jankey handle lever that's bent about 20 degrees off center. I'm absolutely kicking myself for leaving these in their boxes until I went to finish this project up, lesson learned - soon as you order something, double check the damn thing.
You must log in or register to reply here.
Share:
Facebook Twitter Reddit Pinterest Tumblr WhatsApp Email Link

B
My on going keezer build finally finished?