Watched Wales v USA and was impressed by the massive turnout by the Wales fans - they totally owned the stadium for this match with a sea of red jerseys!
USA was up 1-0 around the 80 minute mark when they committed a stupid foul in the box leading to a penalty goal.
Final score 1-1...
Last edited: Nov 21, 2022
P

I really want to watch, and will likely break down and watch my home team(netherlands), but I really wish the teams had just boycotted this horrible WC's organiser and fifa's greedy bs.
K

fwiw from a USA-centric view:

Just days before the tournament began, FIFA and Qatari officials announced that the sale of alcohol would be banned, a huge detriment to Budweiser and parent company Anheuser-Busch InBev, which is now facing a surplus of beer that was meant to supply fans and spectators during the duration of the tournament. The real reason for the ban is because it's not less filling and doesn't taste great! Lol.

Now Budweiser will ship all the unsold beer to the nation that wins the Qatar World Cup. Let the losers celebrate with joy oh yea!

Hole Lee Cow that was intense!
USA wins 1-0 and are moving on!

USA v Netherlands will be played Saturday Dec 3 @ 10AM EST

I think you guys did well, and our team is not doing anything decent, so good chance you win, though without your best scorer it might get hard.

We went to a small brewery with sports for the USA-Iran game. Had a blast , great win for us.

pulisic is fit and the dutch team already seems a bit ****....no flow at all.
USA might make it through the round of 16

yea...that wasn't a great prediction...lol
We weren't great, but tactically just let the US run itself dead onto the defense and countered well, 4 mistakes by the US defense and 3 goals is pretty high conversion.

What I saw: Netherlands played a stifling mid-field defense, while the USA team looked tired 20 minutes in and never seemed to have an offensive strategy.
At all.
Kudos to the Dutch who clearly deserved to move on...

We stunk. Head scratchers on both ends, Lack of effort at times. so frustrating
Last edited: Dec 3, 2022

I agree with @day_trippr the midfield game by the Dutch was prolific. The U.S. passing was pathetic IMO, no movement off the ball and very little overlapping runs. The Dutch outplayed them plain and simple.

We had some chances. Didn’t help to leave a guy alone on the back side and not attack ball on the cross. sloppy on offense too. Credit to them for solid play. 10am beers was fun.

USA is out but the games are still on!
Here's the bracket lineup going into the quarter-finals... 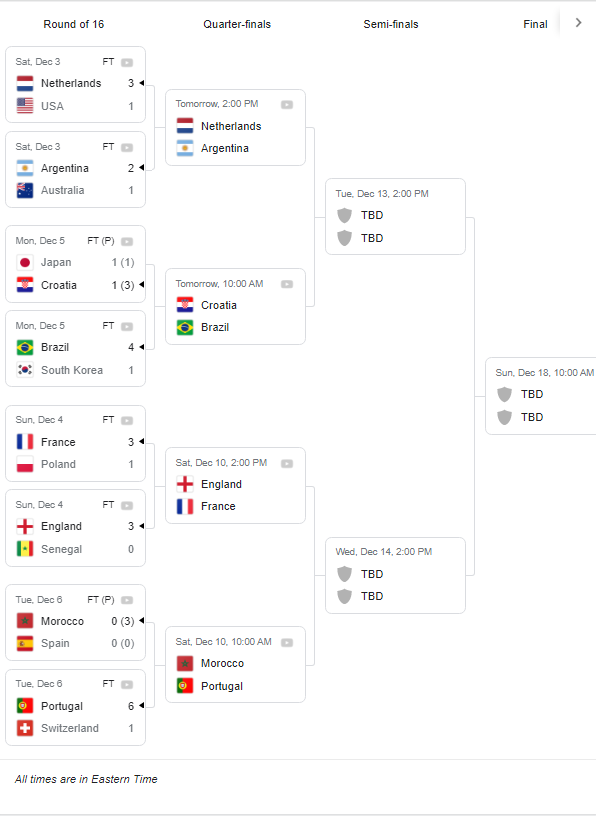 I think we stand a chance against Argentina, but not a huge one...

well...congrats to croatia, great game with the best ending....gotta laugh at neymar wanting to take the 5th penalty...damn gloryseeker got exactly what he deserved..

I missed the Croatia-Brazil game but watched the entire Netherlands-Argentina game which was amazingly entertaining!
Too bad someone had to lose after the Dutch made an incredible comeback from 3-0.

With Brazil out, Argentina looks tough enough to go the distance...

We deserved to lose, the only time we played well was the 20 minutes after the 2-0 till we were back even...

That said, Argentina deserved to lose, what a **** team of fakers and nasty foulers that took full advantage of the ref being utterly useless.

Looking forward to France v Morocco on Wed. Would love to see Morocco advance but will be an uphill battle for them.

Argentina as always is fun to watch. Messi is still an amazingly talented player at 36, he has maybe lost a step but still IMO the best individual player in the tournament.

He has refined his art to match his age: he spends most of the match walking but is deceptively quick when the opportunity arises - and he has killer moves to finish. I think I'd call in sick if I had to mark him

Today France showed Morocco the exit, beating them 2-0 in a fairly even match.
The finals will see Argentina v France on Sunday at 9AM EST. Set your DVR in case you oversleep

One thing I sure wish FIFA would address is the tiresome ******** flopping. It was really bad today, the worst was watching a player barely touched throw himself down then try to figure out which leg to grab. Ridiculous.

@day_trippr Agree the flop must stop. It happens pretty much everywhere and not only during the World cup. Also agree todays match was exceptional in that regard. There are rules that address it and folks can be carded if blatant but honestly have never seen it called.

Well the fans definitely got their moneys worth today!

For almost 80 minutes the final looked like a walkover for Argentina but then France scored two goals to tie the game up in regular time, then both teams scored in extra time to send it to a shootout where Argentina ended it. Heck of a game!

Well played by both teams. Really fun to watch. Hate it when it goes down to a shoot out though. Would rather see one team come out on top during normal play or overtime.

World Cup of Beer Homebrew comp is coming up!