Experimenting With Ingredients In Your Kitchen To Make Prepackaged Kits Unique

Kits are a staple of the homebrewing scene. Put together by your local homebrew shop or the big online retailers, they are all-in-one boxes that give you everything you need to create beers that are time-tested and brewer-approved. Sometimes they are clones of popular craft brews, other times they are retailer exclusives that recreate classic styles, but either way they take the guesswork out of making a great beer. For both newbie homebrewers and veterans alike, that can be a very welcome thing indeed.
But sometimes you want to throw a little twist into an old favorite. Sometimes you want to get creative but don’t know where to start. Sometimes you have a beer idea in mind, but don’t want to spend ages tinkering with a base recipe before you start introducing more unusual elements. That’s when you start kitbashing. 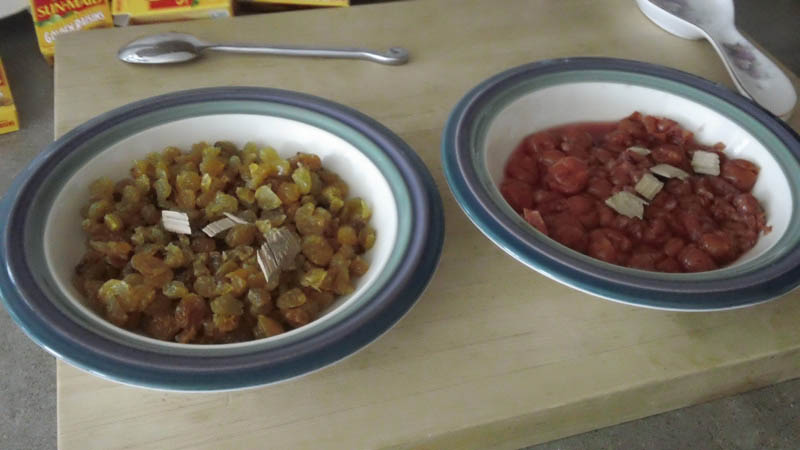 Golden raisins in one bowl, Oregon cherries in the other. Simple ways to add variety to a kit beer.

Kitbashing is model aficionado lingo for taking pieces of existing models – tanks, planes, trains, etc. – and building something new with them. Model railroaders have made an art form out of piecing together components from two or three different kits in order to create something new. To me, the same spirit can be applied to experimenting with homebrewing kits, albeit with a twist (appropriate, given the topic). You begin with something tried and true, pull in some odds and ends from your kitchen, and before you know it you’ve cobbled together something uniquely your own.
This is a great approach for new homebrewers who want to get creative but who do not yet feel ready to write recipes from scratch, and can easily be used by experienced brewers who want to skip the recipe formulation and quickly put their latest outlandish idea into action. Part of the idea is also learning how to rein in the “everything and the kitchen sink” mentality many new brewers fall prey to. Many of us want to be unique and creative when we first start brewing, but it’s easy to go overboard. The result is often an unbalanced mess. By starting with a well-established kit beer and learning how to tinker with it, often using simple stuff found in your kitchen, you’ll have a much better starting point from which to indulge in creative brewing. The result will be better beer – and hopefully you’ll learn something along the way.


Getting Started With Experimenting

The great thing about experimenting with your homebrew kits is that getting started is easy. All you need is a homebrew kit of your choice and an idea. The best ideas begin with a specific beer and spring naturally from that beer, so begin there.
I find that entry-level recipe kits for classic styles are best, as they tend to be simple enough to offer a lot of room for creativity while still providing a good base beer. Those old standards may seem boring in today’s world of mango ginger double IPAs, but the point is that they provide an excellent canvas upon which to paint.
Let’s start with an oatmeal stout kit. This is a classic style, so almost any homebrew supplier is going to offer one. My example began with one from an online retailer, but your LHBS probably has one as well. Probably fantastic on its own, you can spin this traditional style in a host of directions with nothing more than things found in your kitchen. Here are a few ridiculously simple ideas, all of which I’ve done:
Chocolate Oatmeal Stout – At flameout, add two or three packets of hot chocolate mix. That’s it. It’s that easy. Yes, I’m serious. Yes, I’ve done it. The result is a mild but noticeable touch of chocolate in the finish. Boom, two seconds in the cupboard and you just transformed your basic oatmeal stout recipes. Yes, there are more “pure” ways of doing this – cacao nibs in secondary, for instance – but this idea is quick, cobbled together (and cheap) creativity. 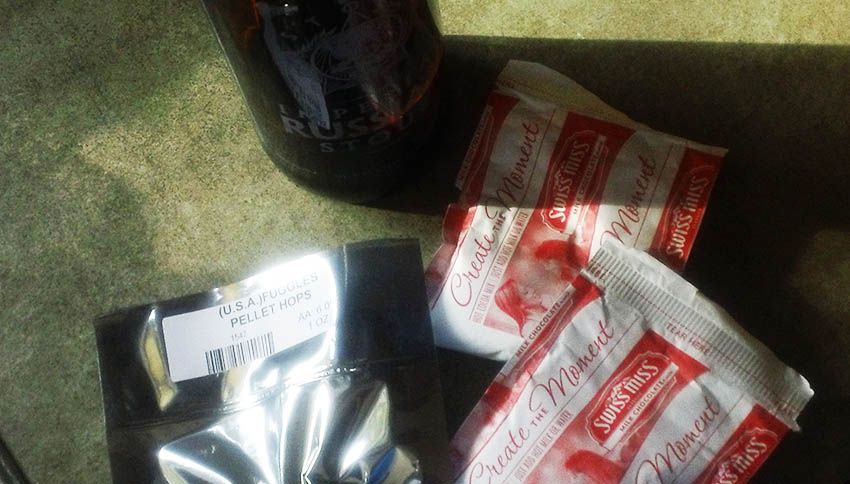 Sometimes, things you don’t think of as being suited for beer can provide what you need to transform a kit beer. Yes, even some Swiss Miss hot cocoa!
Breakfast Stout Jr. – Keep the hot chocolate mix, then at bottling add 8oz of coffee. The result is a sessionable, lightweight breakfast stout. There are many variations on how to add coffee to beer. My preference is to cold brew and add at bottling – you get the smoothest, richest flavor that way – but you can go quick and lazy by just brewing a quick cup in your Keurig.
Orange Twist – For this one, grab two fresh oranges from your fridge and peel them, taking care to peel off as little of the white pith as possible. Again, keep the chocolate. Toss the orange peel in at flameout. You now have a chocolate-orange oatmeal stout – and I guarantee you’ll be surprised at how good it is.
Chocolate Mint Stout – Have a touch of mint in your herb cabinet? Add this at flameout with the chocolate to have a stout that tastes faintly like Girl Scout Cookies. Just be sparing with the mint, because a little goes a long way!


Take Inspiration From Your Kitchen

When looking to get creative with pre-packaged kits, there are a few simple rules of thumb to keep in mind:
The Kitchen Is Your Friend – This is simple. Your cabinets and fridge hold the secret to countless beers you never imagined, you just have to open your mind to the possibilities behind ingredients you don’t normally see listed in recipes. Check that spice rack. Look at those herbal teas. Take a gander in the snack drawer. You never know what might make for an interesting twist on an ordinary beer.
A Little Goes A Long Way – Don’t overdo it. This is an easy mistake to make, especially with herbs and seasonings, which tend to be far more potent than you realize. Be creative yet conservative when you experiment. Worst case scenario is that your additions don’t shine through. You can always adjust for the next batch. On the other hand, too much and you could have an undrinkable beer. Remind me to tell you about my misguided spruce beer one of these days …
Start With Basic Kits – The best pre-packaged kits for kitbashing are standard, traditional styles. These give you a clean, simple canvas upon which to paint. They also mean your added ingredients won’t have much to clash with.
Avoid More Than Two Twists – Adding something exotic to a simple beer can turn it into something wild and new. Adding a second, complementary ingredient (such as the cocoa and orange peel mentioned above, or a dash of ginger and curry in a saison) can add interest and complexity. Get much beyond that, though, and you’re asking for a muddy mess that can be very difficult to balance. Don’t get sucked into the idea of making a Double Chocolate Raspberry Stout with Chai, Bourbon and Oak Chips. It may sound wild, but getting it to taste good is something else entirely. It often takes many tries to dial those complex beers in. 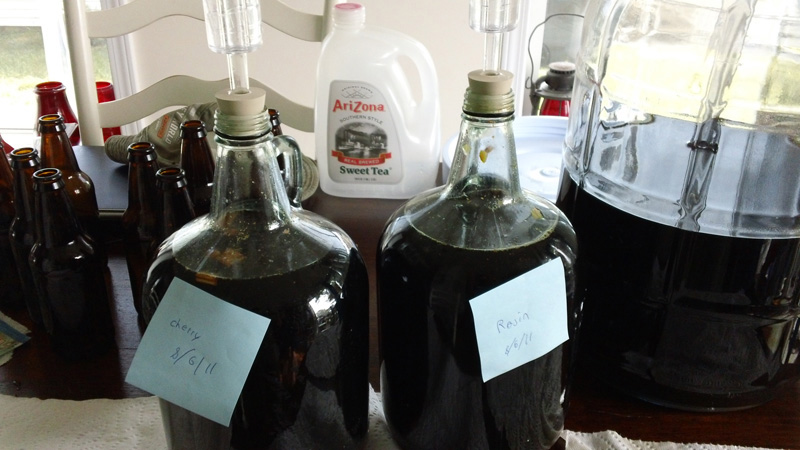 What was once a kit-based Abbey ale became three different beers thanks to some kitchen ingredients and experimenting in secondary.
Don’t Be Afraid to Split Batches – If you’re going to get creative with a kit beer, consider using a pair of carboys instead of one. Split your batch in two, one as packaged and the other with the added ingredients. This is easy if you plan to add an extra twist in secondary or at bottling. If you’re doing it at flameout, you may need to move half the batch to a new kettle before doing so (which can be tricky, but is possible). Either way, you get two benefits from this:
1) Side-by-side testing to gauge the impact of your experiment, and 2) more variety in your homebrew stash!
There Are No Rules – The advice above is just that. Advice. It’s good advice that will help prevent you from creating drain-pours, but when it comes to creativity don’t let anything stand in your way. Part of the fun in homebrewing is experimenting.
A friend once made a blueberry coriander porter. I advised him against it. It actually turned out kind of interesting. My winter porter with four different types of peppers was probably ill-advised, but it turned out to be one of my favorites. And so on.

And that’s it. That’s all you do. It's very simple, and it’s perfect if you’re a by-the-seat-of-your-pants brewer rather than an analytical, methodical kind of brewer. As far as I’m concerned, there is plenty of room in the world for both – not to mention, I’ve learned TONS from brewers who get their methodology down to a science.
The great thing is, kitbashing is fun, easy, and CHEAP. I could make a list a mile long of kits I’ve “bashed” into something else at almost no additional cost. The basic kits from your favorite retailers are almost always the most affordable, and by cobbling together inspiration from your kitchen, your investment in turning it into something new can be close to zero.
For ideas and inspiration, I recommend Extreme Brewing by Sam Calagione of Dogfish Head, Radical Brewing by Randy Mosher, and your own creativity. These things, and a healthy disregard for the rules, will result in awesome beers you have never tasted before!

E
Eric San Juan
Eric San Juan is a freelance writer, former craft beer columnist for the Philly Weekly, and author of several books, including “Stuff Every Husband Should Know” (Quirk Books 2011). His musings on beer, life, nerd stuff and more can be found at ericsanjuan.com. You’ll often spot him drinking good beers on his nerd nostalgia Youtube show, https://www.youtube.com/user/SneakersAndSoul. Eric thinks gardening is a logical extension of homebrewing and urges you to plant some fruits and veggies this year.

Excellent writeup. I don't get kits where I am, but I'm always tempted to split off a gallon here or there to mess with my brews on an experimental level. I rarely go through with it, but this might be the push that makes me take the plunge when my next bashworthy brewday comes along.
I can't recommend splitting off batches highly enough. I use gallon wine jugs repurposed into single-gallon carboys -- the bung fits perfectly in the top -- and do experiments in them. That way I'll have four gallons of the standard stuff and a gallon of something offbeat, just to see how it is. If it doesn't turn out well, no great loss, you still have four gallons of the good stuff. And if it does, you can scale up for next time and do a full batch.
Happy experimenting!
I do the same thing. Every 5 gallon batch ends up as a 3 gallon batch of known good product and two separate 1 gallon batches of experiments.
This is a great article.... Experimentation is where we got many of our current beer styles! Splitting a batch is the perfect way measure the results against the base style!!!
3 cheers for a good and interesting read!
Cheers this little write got my head spinning, and im trying something new TONIGHT!
You must log in or register to reply here.
Share:
Facebook Twitter Reddit Pinterest Tumblr WhatsApp Email Link

May 17, 2017
Jordi Cartagena
J
M
Getting Creative: 8 Steps to Designing a Unique Brew