Can someone tell me what SWMBO stands for?

Supper Without My Brew is Onerous

Actually, this is my opportunity to pimp my signature...

Gee jtvinny, you forget how to play???

Slippery Weasel May Be Oily. 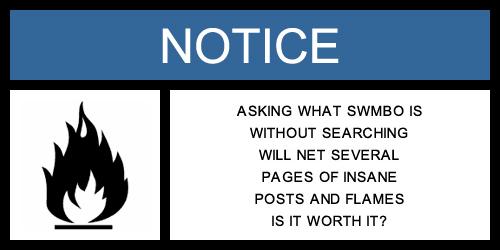 Some Will Maybe Be Ordained....

Man, the noobs just don't know how to play this game very well do they!?!?

Searching Would Maybe Be Obvious....

while that one is probably most appropriate, Evan's classic "Skank With Mean Body Odor" is my all time favorite - lol

She doesn't hesitate to speak freely about everything I bless up.

The right to bare arms.

We are muslims and she hates long sleeves in summer.

Kilted Brewer said:
Man, the noobs just don't know how to play this game very well do they!?!?

No kidding what a killjoy.

Dang! I had one saved up! This is torture!

Sexy Wife Must Bend Over

So Why Must Barry Overwork?

Shy Wilderbeast Must Be Overcome.

My favorite on today!!!!

Siphoning Woes May Be Oxidizing

Second Wiff Must Be Overrated

you guys rock. unlike some women I really like the SWMBO thing, if it were only true. If he only obeyed, it would all be good. HWMBC is not into obeying. I on the other hand am the perfect wife, I like to brew beer, drink beer & do other wifley things with HWMBC.

Sinister Witch Must Be Obliterated

But howmany of you know where it comes from?

The first use of swmbo was in the serialized novel "She" (w** m*** b* o*****) by H. Rider Haggard published between October 1886 to January 1887....IIRC it is part of the Alan Quartermain novels...Remember the movie King Solomon's Mine This is part of the series.

And also the Sean Connery Character in the League of Extraordinary Gentlemen.

You can read the novel online it looks like...Bibliomania: Free Online Literature and Study Guides


And Ursula Andres made a damn fine looking one in the 1966 film version.

My answer is get the **** over it...it's a term of endearment, and meant to be fun...(AND this is from a guy who spent a good part of the 90's leading men's workshops & retreats along side the likes of Robert Bly, James Hillman and Michael Meade, produced and co-hosted a radio show on men's issues, and published several articles on the subject a few which were reprinted on menweb http://www.menweb.org/. If I can handle it, then the rest of you should just suck it up, or 'll beat you with my drum) *wink*


Silly Wankers Must Be Ousted.

Someone Who Might Be Outsider? [as in the original poster]

some whitey must be oblivious.... not stereotyping of course.. you are right revy that guy is a total punk

There are technically three types of SWMBO:

She Who My Beer Obliterates (this one might be problematic)

She Who My Beer Offends (this one is definitely a problem)

She Who My Beer Orgasms (this one will do)