Okay, as my brewing advances, I keep collecting more and more equipment that I have to store and lug upstairs each time I want to brew. I keep everything in a cardboard box right now and was wondering if anyone has come up with a better storage solution for their supplies that can be portable as well. The box is falling apart now so it’s time to upgrade.
T

I have something silimar to this:
https://www.bunnings.com.au/ezy-storage-18l-storage-tub-with-insert-tray_p0028542

Plenty of room for all my plastics and small things - measuring cup, hydrometer, thermometer, grain bags, bottle caps, etc. Plastic is durable and can stack easily.

I bought a couple cheap totes from menards for about 5 bucks each. I also kept a few smaller flip top boxes (kits often come inside of these) and load it up with whatever ingredients I need, and toss it in the tote with my kettle, spoon, instruments, fermenter etc etc. One trip upstairs instead of six. I also keep one where I generally ferment as an easy container in case of overflow, placement of blow off jug, it covers when I’m doing small batches, and a general cat deterrent. Also makes it easier to carry the fermenter back down for bottling.

Although now that I see tgolanos link, I like his better!

Clear plastic storage bins with latching lids and in sizes ranging from "armload" to "I need help with this!" are available at big box stores for cheap money and you can see which one holds the item you're looking for

I too had the issue with hauling things up from the basement to brew. Typically 20 trips up and down by the end of the day.

I found a rolling metal cabinet (72" by 18" by 36") at Sam's club for $209. Not a cheap solution, but it's remarkably cheap for what it is. I have a nook in the garage that's rolled into, and my equipment is right there. Roll it out for brew day and voila!

You can make a cheaper version by building shelving on a rolling dolly used to move furniture and applicances.

I did that for grain and buckets in the basement. It tucks against other storage; when I want to access that, I just roll it out.

Maybe some of this will give you some ideas. You can also use pegboard to hang items, which I use for hoses and such.

I keep all my small brew day stuff in 1 bin that I bring up from the basement on brew day. It's a plastic bin with a latch top with nice "grippies" on the side. I still have to lug up my mash tun, hlt, boil kettle, mill, 2 buckets, mash paddle, auto siphon, etc... hahaha. All that's actually in the bin is my starter stuff (stir plate, large beaker), refractometer, hydrometer stuff, spare hoses, fine mesh strainer, scale for weighing hops, and a few other small things.
Either way, bin or no bin, I'm still making several trips up and down the stairs. I figure I have to work off all the tasty beer calories somehow!

I have my basement brew stuff organized by a brewing beer side and a packaging beer side. That way there's some kind of order to where stuff goes. I just moved in June so I'm still figuring out where stuff goes and how it's all going to work but it's a start. I was working with a lot less room before we moved so it's an upgrade either way. 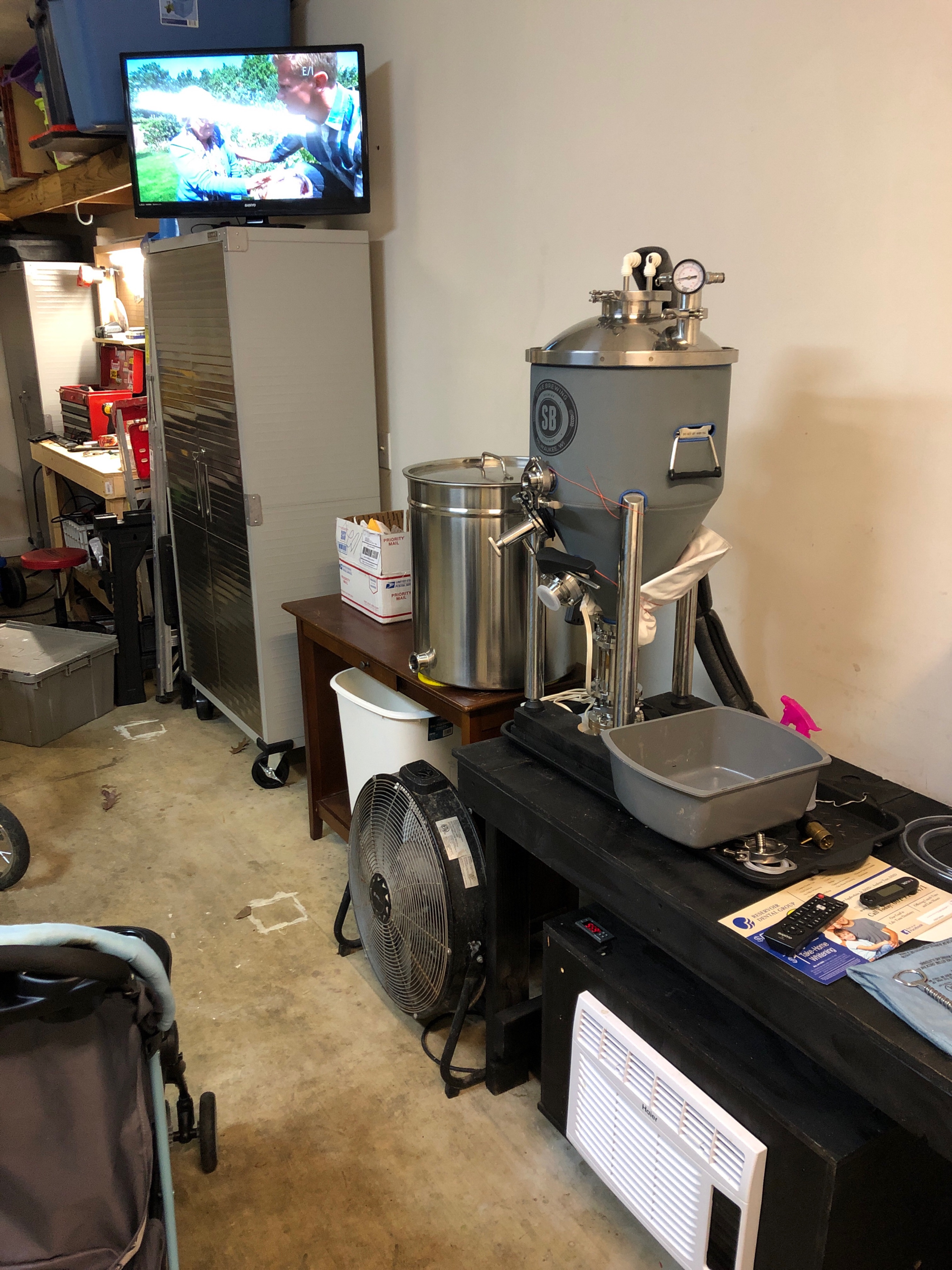 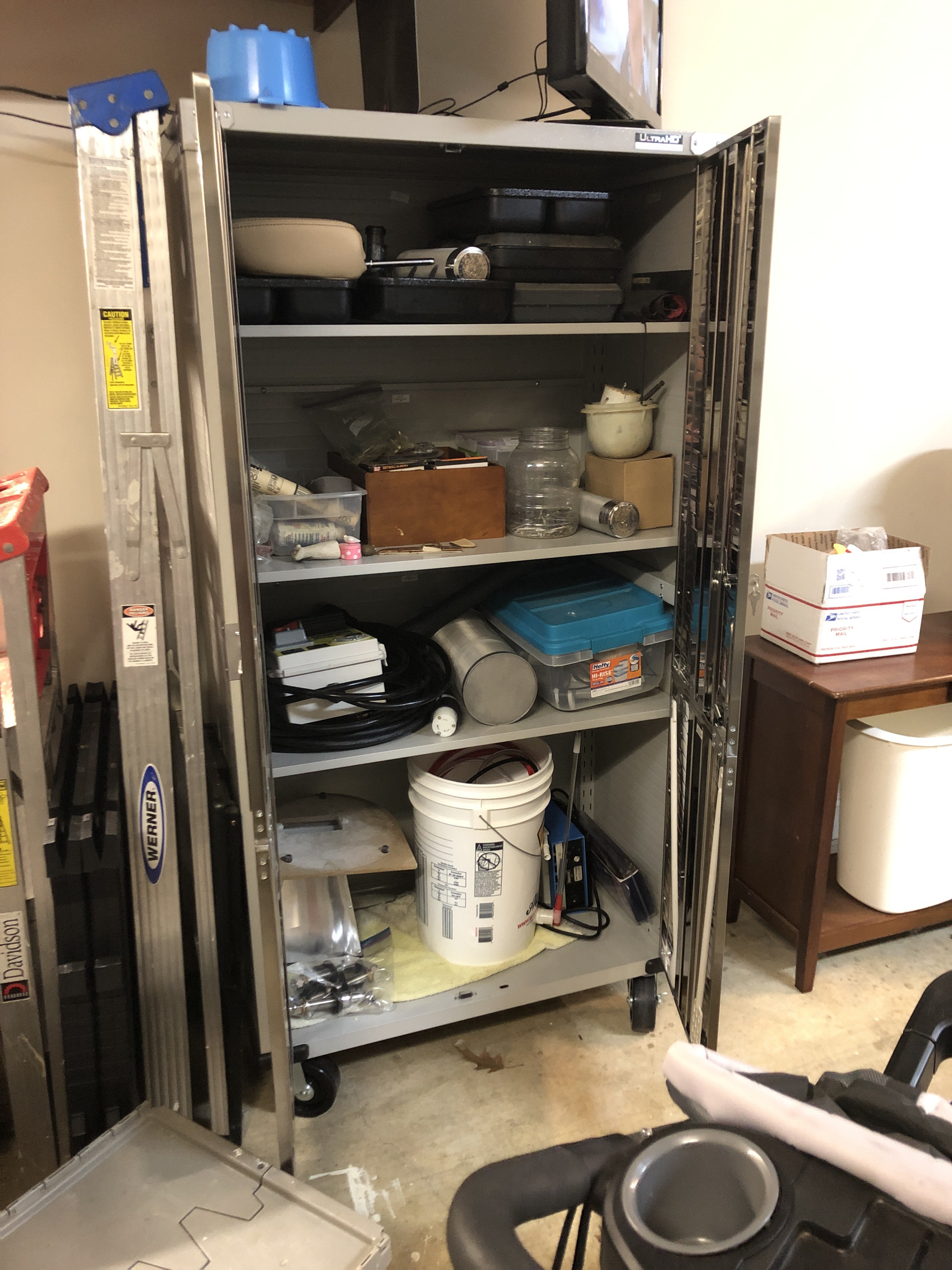 ChadS said:
I keep everything in a cardboard box right now and was wondering if anyone has come up with a better storage solution for their supplies that can be portable as well. The box is falling apart now so it’s time to upgrade.
Click to expand...

I ferment and store most of my stuff in the basement, but most brew-day essentials are stored in the garage

ChadS said:
Okay, as my brewing advances, I keep collecting more and more equipment that I have to store and lug upstairs each time I want to brew. I keep everything in a cardboard box right now and was wondering if anyone has come up with a better storage solution for their supplies that can be portable as well. The box is falling apart now so it’s time to upgrade.
Click to expand...

home depot or Lowes sells clear plastic storage tubs with lids that seal and stack neatly. I use those . I also have a few decent sized picnic coolers that hold a lot of stuff . Buckets with gamma seals too. If you buy buckets though , find the food grade ones and put a spigot in near the bottom so you can use it for bottling or dispensing star san if need be....multiple duty ,instead of single duty.
My mash tun is a converted 43qt picnic cooler Igloo Cube , Its lid has a small lidded compartment , I keep hose clamps and a couple small cpvc fittings in for when I sparge. I keep a lot of the brew day equipment right inside my tun and kettles, grab just a few things and Im ready to brew. My actual electric brew rig is on wheels.
Last edited: Jan 20, 2019
You must log in or register to reply here.
Share:
Facebook Twitter Reddit Pinterest Tumblr WhatsApp Email Link