Do You Really Ruin Gelatin If You Boil It? Experiment Time.

I have been brewing for some 5 years, 2 of those also as a head-brewer at a local brewery. I don’t have any official education supporting my brewing skills, I gained all of them myself, reading forums, books and articles like this, but most importantly, by experimenting. The information you get from other homebrewers can be useful, but as you probably know, you must take it with a pinch of salt. So many times you read posts from people who are claiming something, but then, after some time, you find out they were completely wrong. Sometimes the wrong information just robs you of your time, sometimes it ruins a brew or two, or slows down your progress. Some of these rumors are so widely spread that the counter-information stands no chance. One of the very common rumors is that you mustn’t boil your gelatin solution (that many of us use as a clearing agent), because you DENATURE the proteins present and it no longer does its job. However, as everybody knows, it is a good idea to sanitize everything that touches the beer in its cold stage, so being able to boil the gelatin would really be convenient. This is the reason for me publishing this article, to bring (what seems to be) true to the masses. Just a little disclaimer, I try not to be a hypocrite, so I admit right now that all you read in this article are just my theorems and information I got from the internet, often simplified, as well as an experiment. There are, however, is some really nice evidence that supports some of them.

It is a protein substance derived from collagen. Collagen is the main structural protein in bodies of animals. It is insoluble in water, but at certain conditions, it can be broken down by water molecules, an irreversible process called hydrolysis. And this is how gelatin is made. Gelatin is to collagen is what dextrins are to starch. The collagen is usually sourced from animal skin, bones, and hoof as these are the most collagen-rich parts. It has to be extracted first to get rid of fat, minerals and other substances, but the actual breakdown into gelatin is then done partial DENATURATION by BOILING it in water. It is then even sterilised by heating to 140°C (375°F) and dried to the solid form.


How and Why Gelatin Works?

First, let’s talk terminal velocity of spherical objects in fluid (yes, it’s physics and yes, it’s beautiful). Now this will be very inaccurate due to million kinds of little simplifications here, but still sufficient to give you a point. Imagine two spherical objects (both the same material) of different sizes. In vacuum, they are going to fall at the exact same speed (accelerating, actually, but at the same rate). In fluids, things get much more complicated, as the drag comes into play. The bigger ball obviously has more drag, but it is also heavier, in fact, so much heavier that it counterbalances the drag difference and the bigger ball is falling faster than the small one. At some point (rather quickly) both balls reach their terminal velocity and they no longer accelerate, they fall at constant speed. This terminal velocity is given by this formula:

v=29ρp-ρfμgR2​
In the equation, everything except R (which is the ball radius) is constant.
See the power of it? Ball 10 times the diameter is going to fall 100 times faster.
Now the balls are the tiny little particles that make your brew cloudy. Yeast is one kind of these particles and while it is by no means the tiniest, it is still so small that it’s terminal velocity only allows it to fall very slowly. It has, however, one very useful feature, the feature called flocculation. Some strains (Fuller’s for example) flocculate so well, that you can see chunks as big as 10mm in your starter. And as the formula higher up says, the bigger the particle, the higher the settling speed. This is why Belgian powdery strains take ages to settle. A bigger problem, however, comes with particles smaller than yeast (they are usually proteins). They are (and thus their settling velocity is) so incredibly small, that they seem not to settle at all. They don’t even flocculate. What’s more, some particles are even smaller, so small, actually, that they are affected by some really minor molecular forces to such an extent, that they really do not settle. These are called true colloids.
This is why you want to add gelatin. Gelatin has a strong positive charge in acidic solutions, which results in electrostatic attraction between gelatin macromolecule and our tiny little haze particles and voilà, the particles suddenly flocculate. 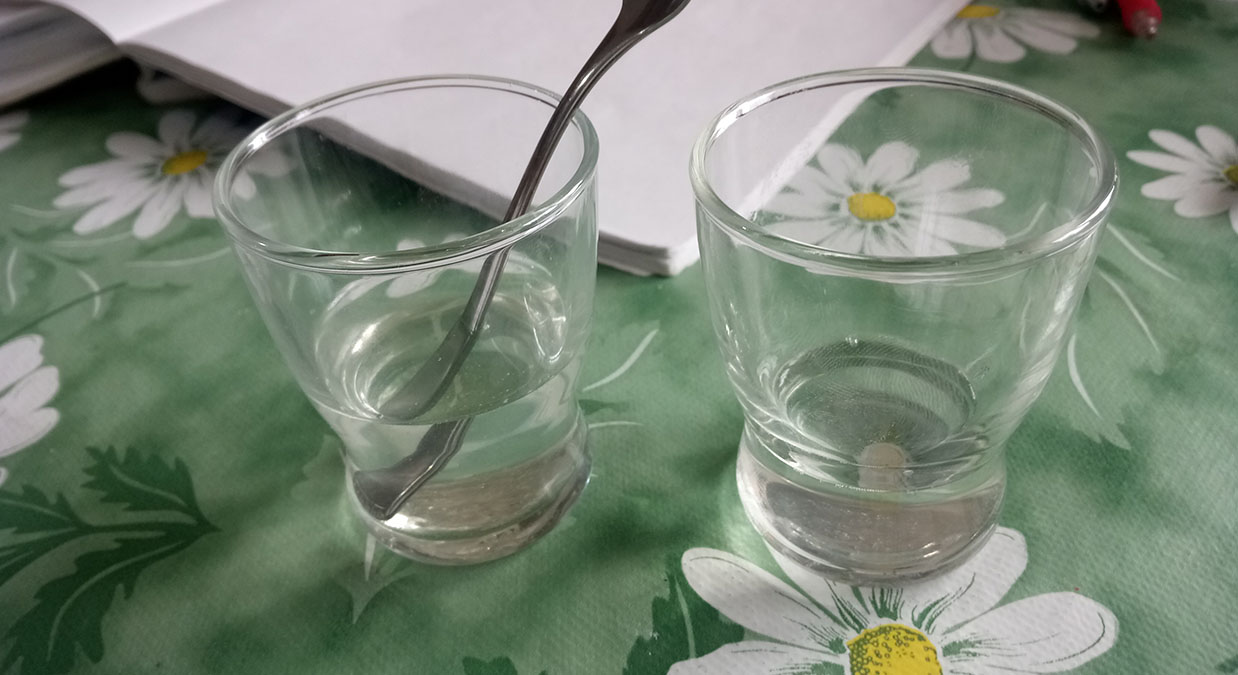 The experiment was rather straight-forward. I bought three bottles of the same cloudy wheat beer (Hoegaarden). I let them cool in my kegerator for 12 hours to a serving temperature of 4°C. I prepared two solutions of gelatin. I decided to try the two extremes, so I diluted the first portion of gelatin (0,5g) in 40ml of roughly 30°C (86°F) water (a full hour of stirring) and I boiled the second portion (0,5g) in 45ml of water (to make up for the boiloff) for one minute.
I then opened two of the bottles and injected 5ml of one of the solutions to each of them and capped them. I gave all three bottles a good shake, so they have the same starting point. 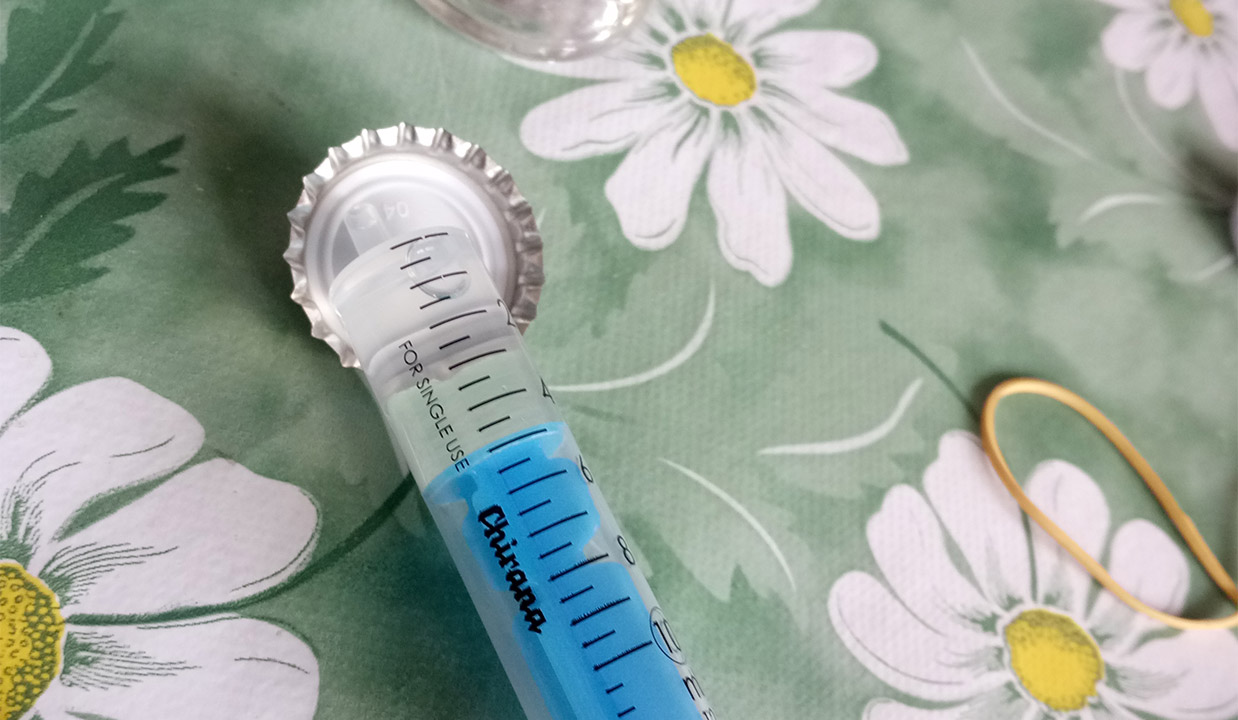 I put the bottles back to the fridge and decided to wait 48 hours for the magic to happen. After 24 hours I checked the progress. Both bottles with gelatin were visibly less cloudy than the untouched one, but not clear yet.
After the 48 hours, I took the bottles out for sampling. 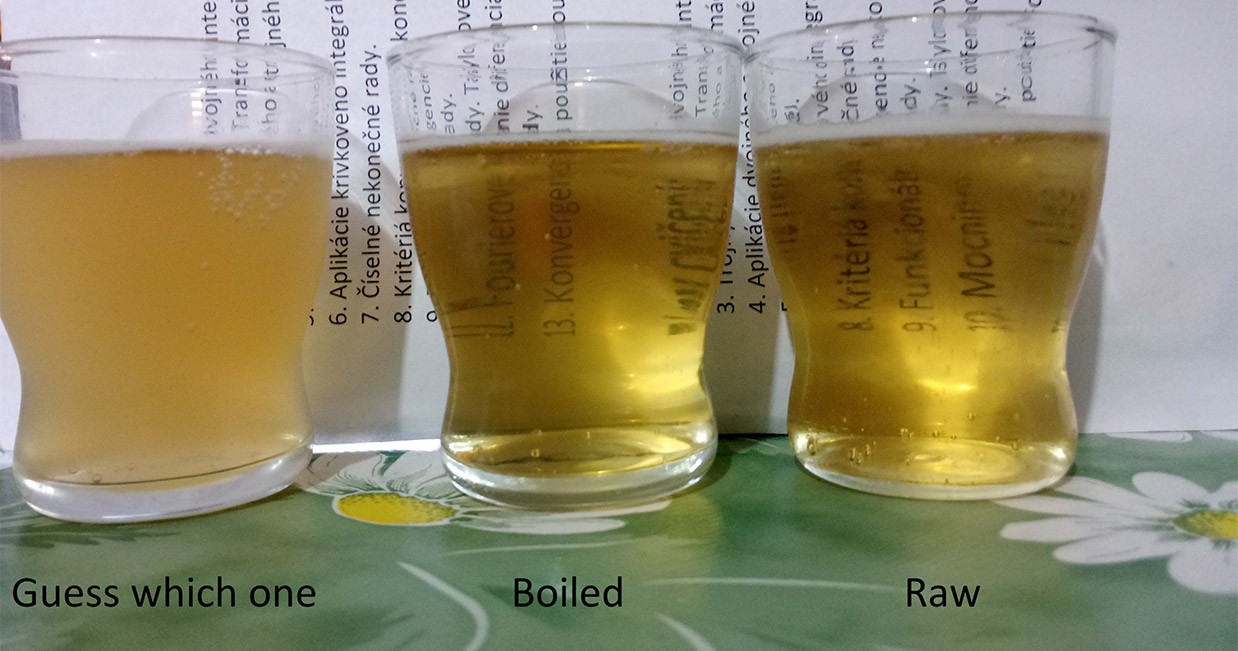 As you can see, the myth is busted. I tasted them, and I can tell the clear ones were definitely crisper and also seemed to have slightly lighter body and slightly more banana taste to them. The taste difference was similar to hefeweizen vs kristalweizen and I preferred the hazy one. It suited the witbier style better. I should also say that while the beer in the bottle was clear, the sediment was easy to agitate. This applied to both samples.

Boil your gelatin. It is safer, much quicker and makes little-to-no difference. And also, don’t believe everything people say and don’t spread it if you don’t have at least some clues that it is actually true.

Want to Read Part 2? Check Out This Article »

I decided to do an experiment to bring more light into another commonly discussed, gelatin related topic: “Do you have to cold crash before gelatin fining?” While with the last topic, opinions were quite polarized, some people saying boiling gelatin is a disaster, others being on my side, with this one, most people agree cold crashing is recommended. Let’s look how much of a difference it really makes!
What Exactly is a Chill Haze? Every homebrewer knows that sometimes, after putting a warm bottle of apparently clear beer into a refrigerator, the beer becomes hazy as it cools. Generally, some proteins are insoluble in beer, while others are soluble up to a certain concentration if certain...

R
Robert Solarik
My name is Robert (but I like to call myself Robko). I was born, and I also live in Slovakia, a small country south of Poland. Ever since I was born, I have been curious how things work, which led to basically all my toys being disassembled at some point of their short lifespan. During high school times, however, I discovered the charm of homebrewing and after graduating, I was not really decided what university to proceed to. I don’t like doing things if I am not sure they make sense, so I got a job as a head-brewer in a small brewery, because that was my biggest passion at the time. After two successful years I finally decided for studies of mechatronics at a technical university in my hometown, and I am enjoying every bit of it. I am still brewing actively at home. It has been five years since I started.