Figured I'd start a dedicated thread for this.

I have spotted a lot of small spiders on the leaves, but I don't believe them to be pests. The male has a lot of earwigs under stunted yellowed shoots, not sure if it's a coincidence or not. I occasionally see grass hoppers around or on the plants. I saw one Question Mark Caterpillar a while back on one plant. Saw some kind of flea beetle today, not sure the exact species. Never noticed leaf hoppers, but will have to look better for them. Never noticed aphids, thrips or spider mites, but I did not use magnifying glasses nor spend a lot of time scouting.

Most common symptom seems to be chlorosis, with leaves turning basically white. Mostly new growth. Some necrosis on leaf tips on some plants. One or two plants have white stains on them, whether it's fungal or fertilizer salts, haven't determined yet. A number of plants are stunted, some are really short despite having a lot of leaves. Few plants are over 3 feet, only one of them reached the full height offered (probably around 15 feet?).

Those plants have not been treated with any pesticides. They were mostly given 20-20-20 miracle grow in Spring, then neglected for a while, and I've now started giving them ammonium sulfide (21-0-0). They are all new. 45°36&#8242;N, below-average temperatures, almost daily rain, heavy clay soils. Some are directly in the soil, some are in pots in the soil. Those in pots have a mix of the native clay and of a bit of black earth+perlite or pro mix (peat moss + perlite), depending on what I had on hand when I did it. 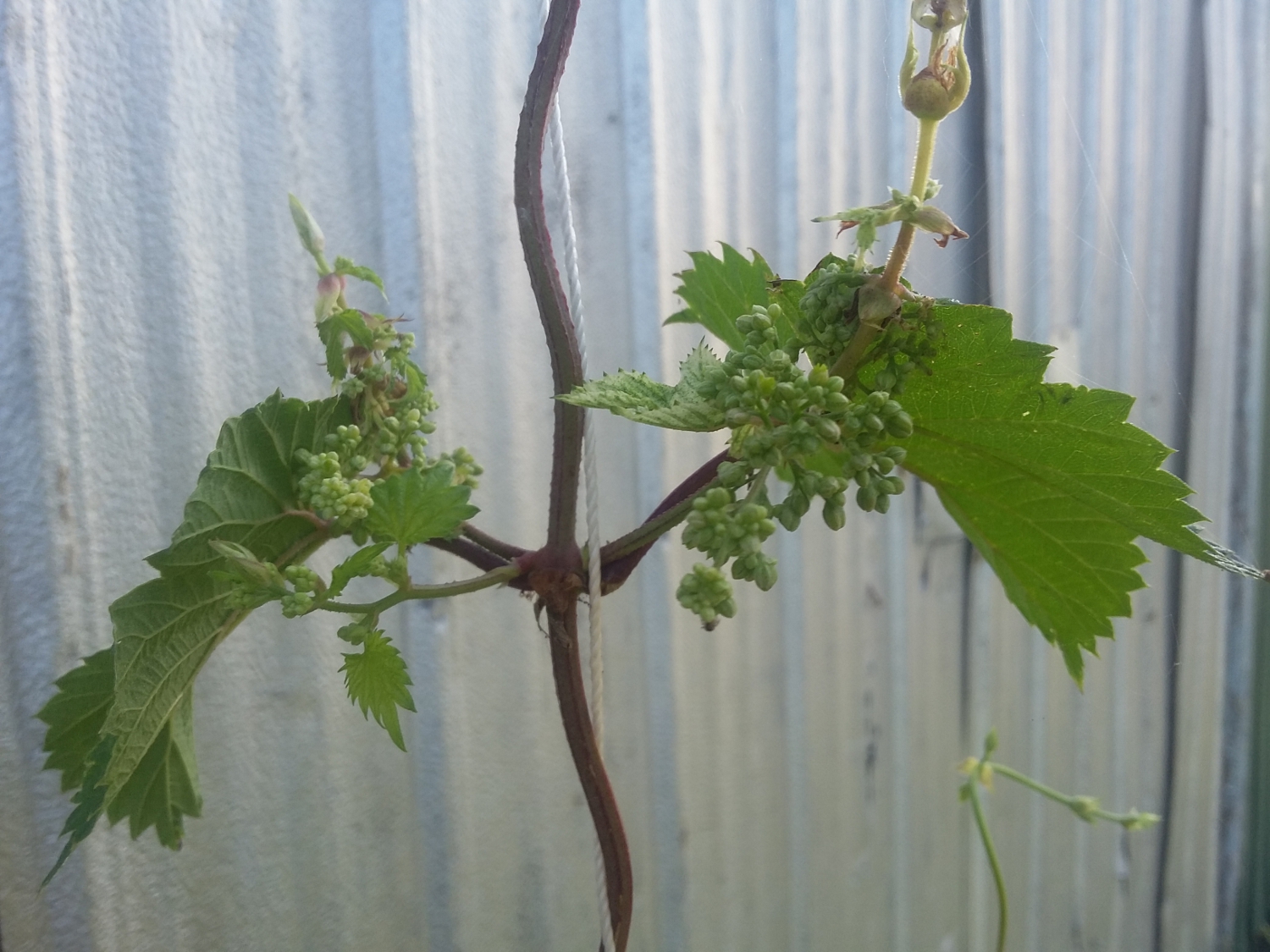 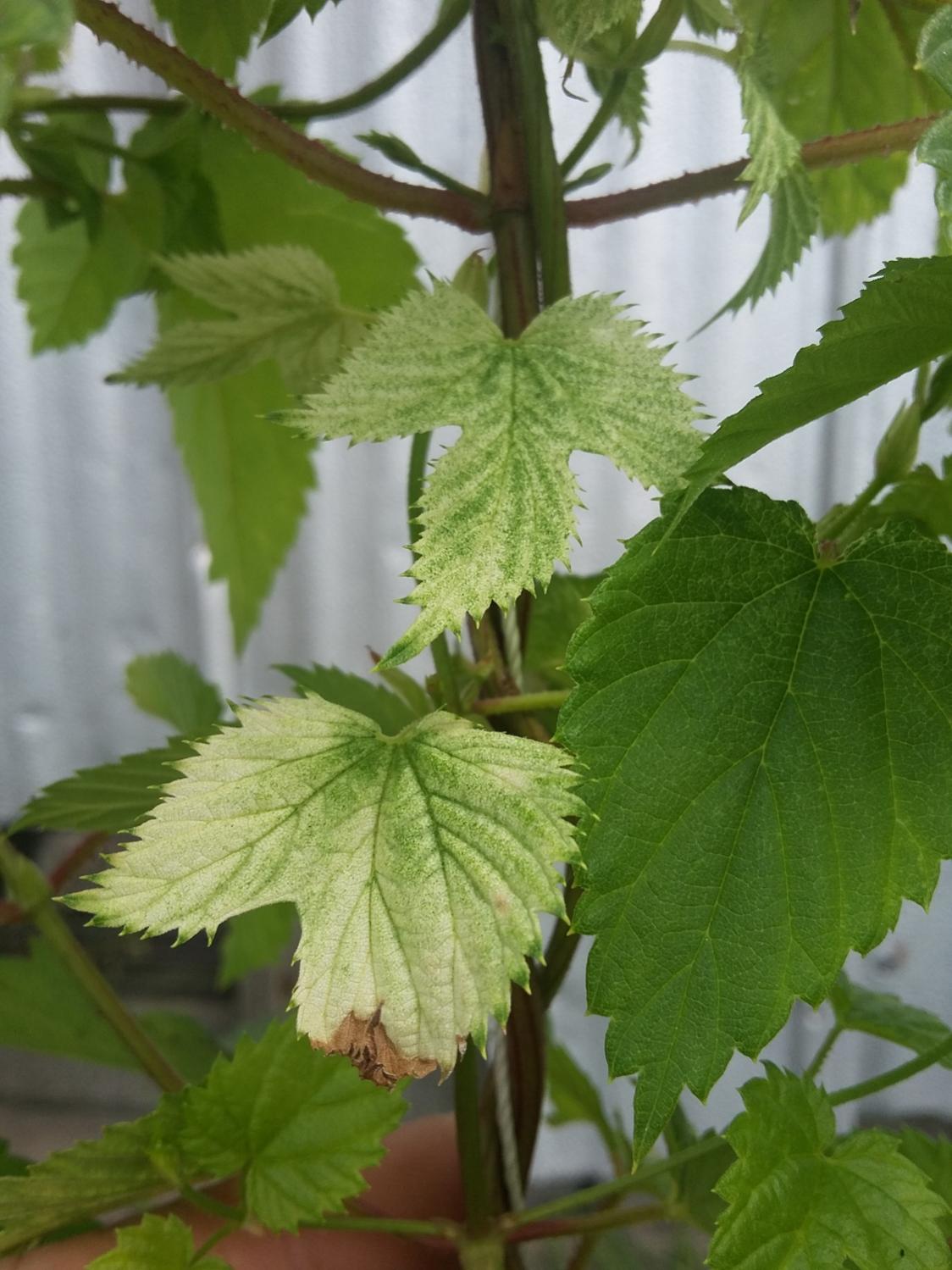 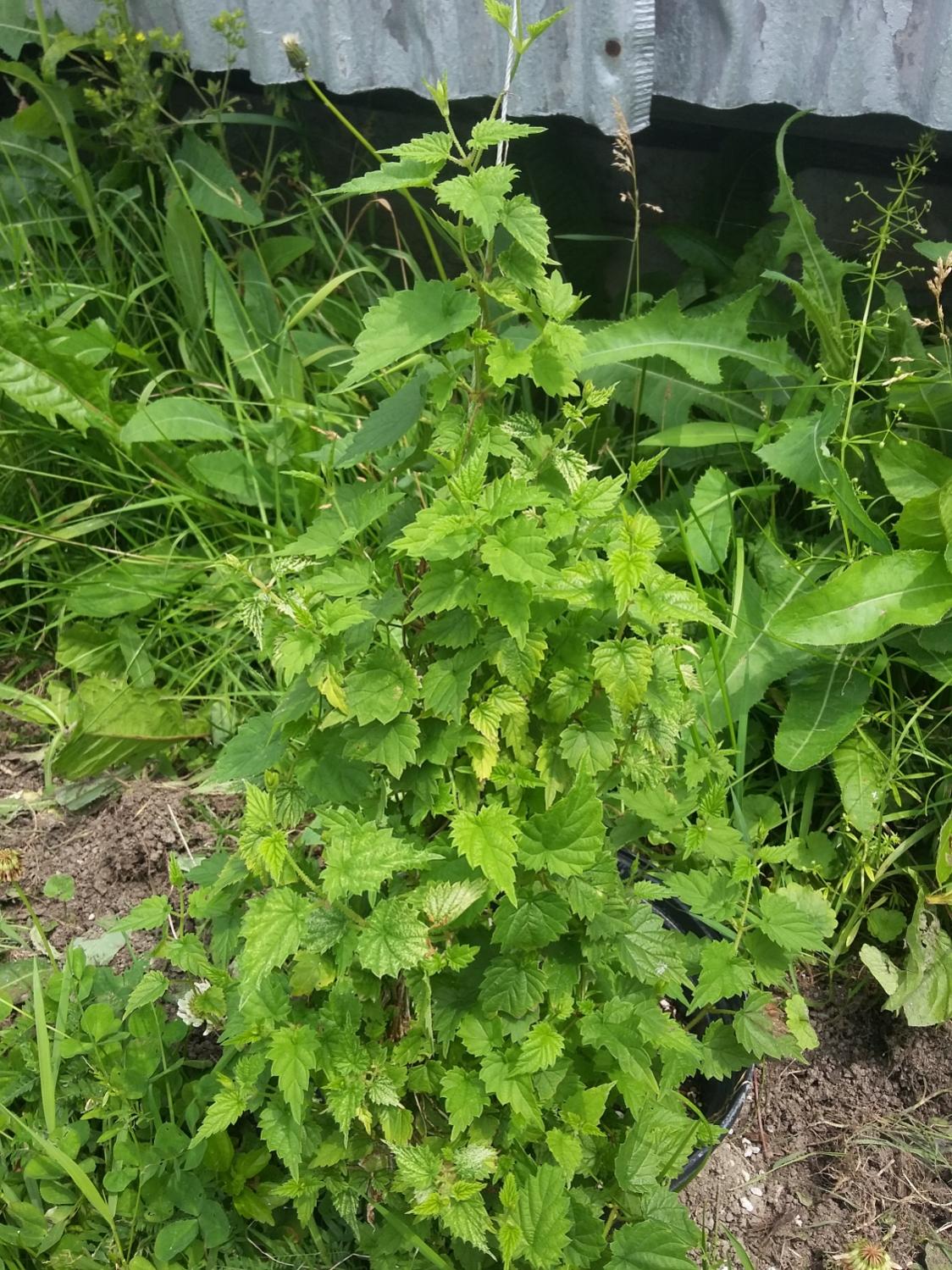 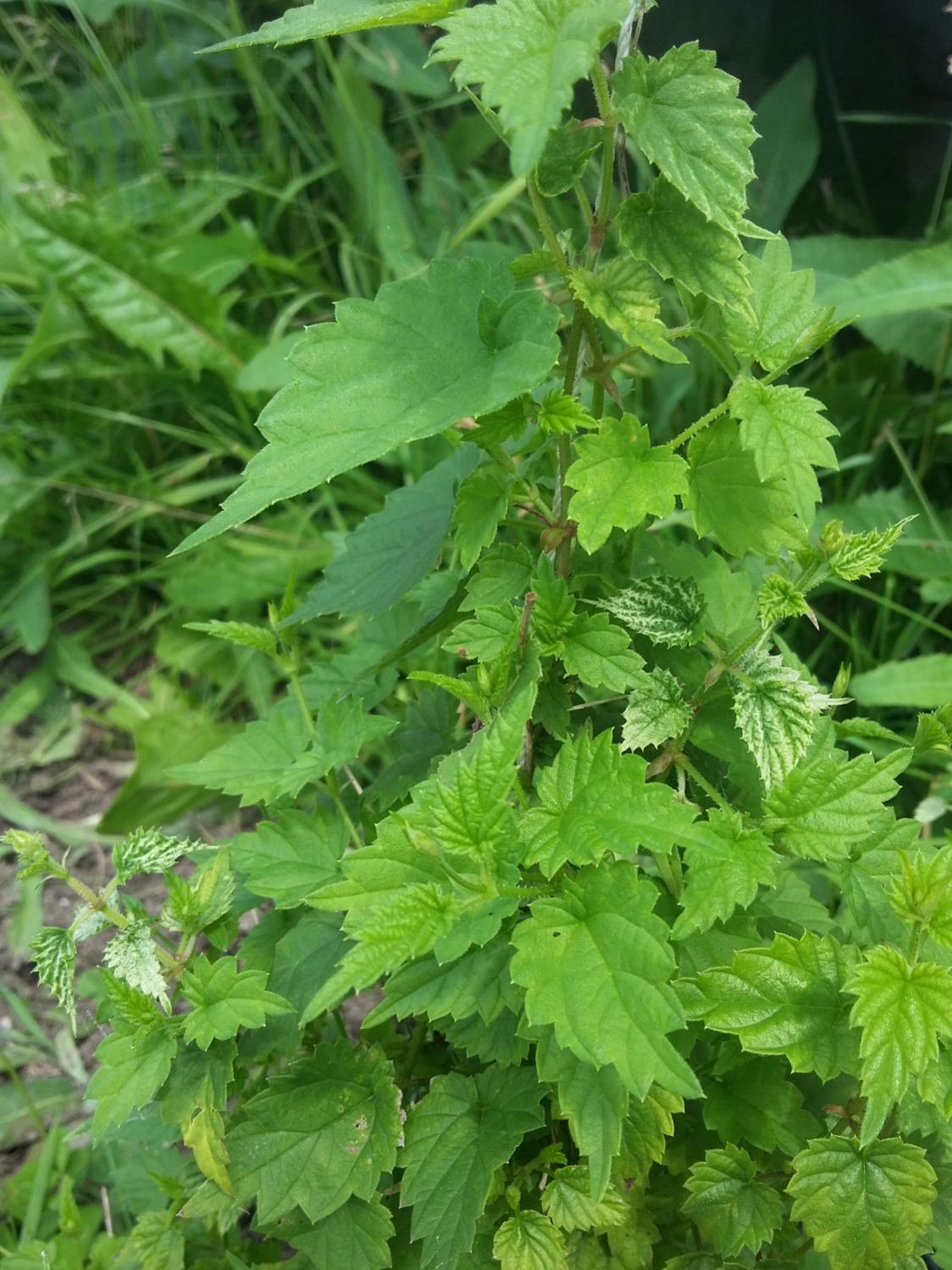 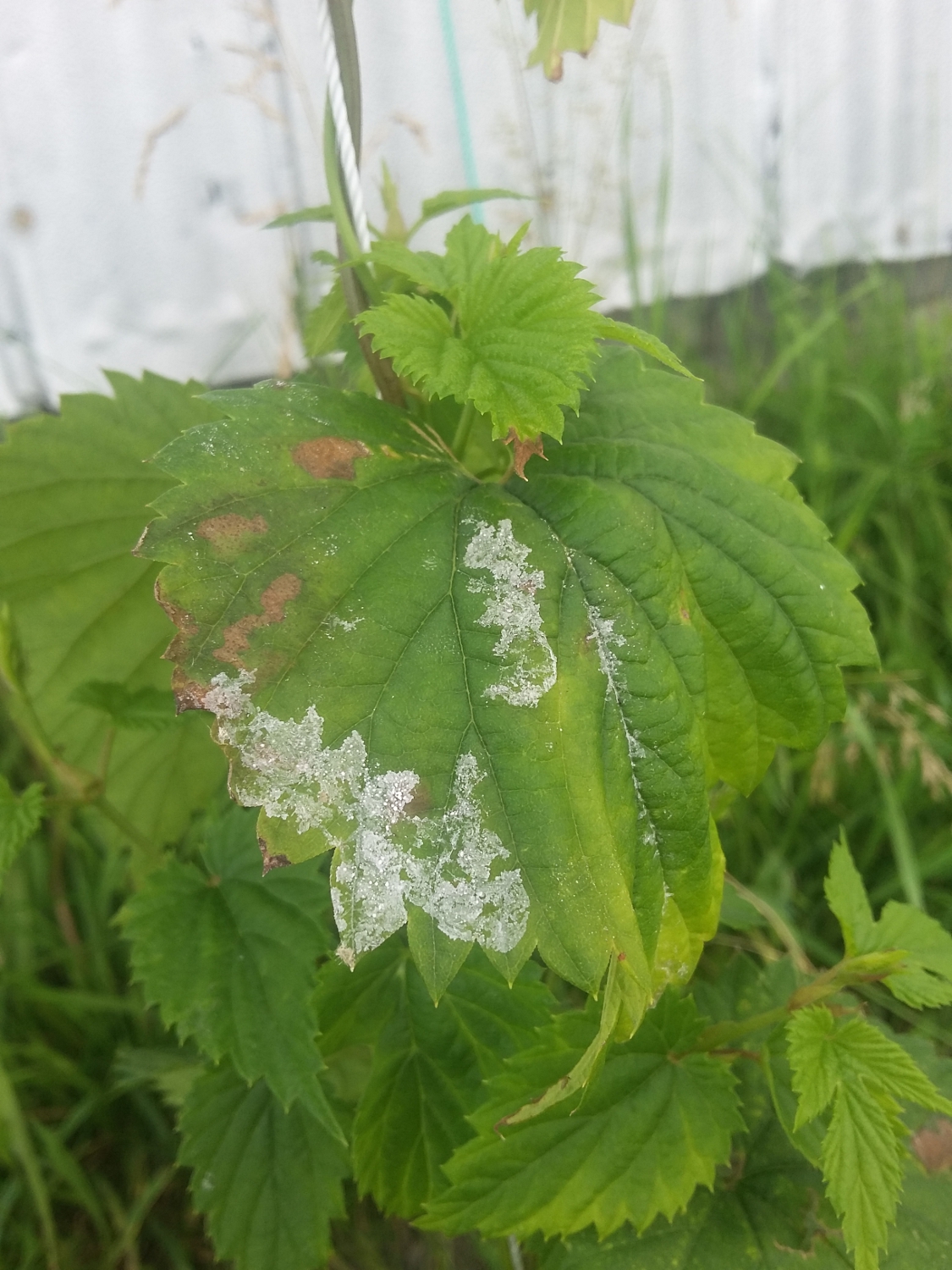 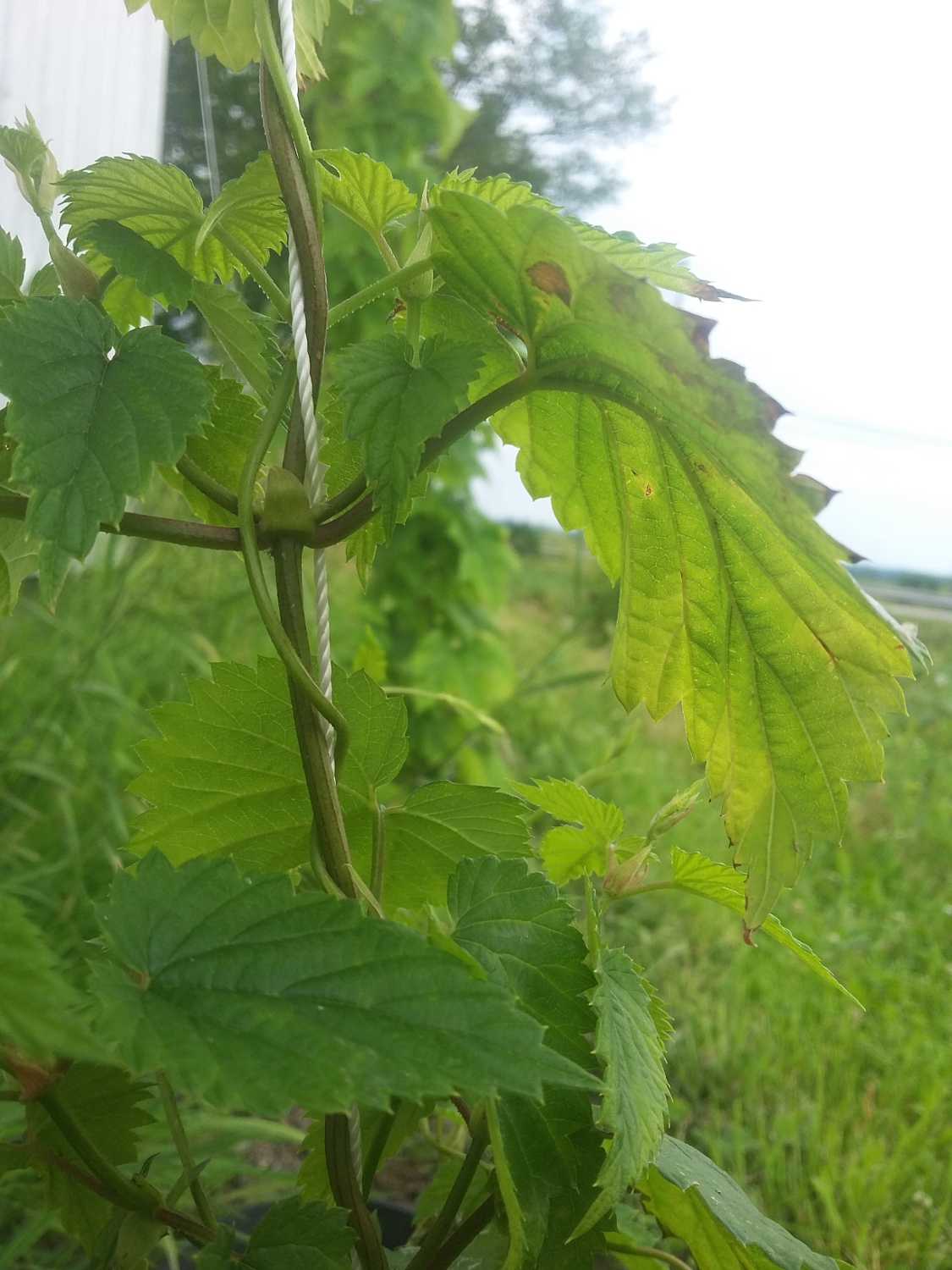 No PM or DM are apparent in those photos. White "growth" looks like bird scat. Additional symptoms look primarily like mineral deficiencies. Either Mg, Mn, Zn, or Fe.
OP

If there's a deficiency in anything other than nitrogen or boron, I suspect it's one caused by antagonism due to overabundance (or over-availability) of another nutrient. In the other thread, someone mentioned the possibility of zing leeching from the metal (presumably galvanized) wall. I found an article on Zn toxicity for sweet potatoes that mentioned stunted growth at levels about what I have in my garden (which is near but not next to the building like the hops are) and that it can induce iron deficiencies, which can result in interveinal chlorosis in young leaves and necrosis in tips of older leaves. Seems pretty close to what I'm observing.

Liming and phosphorous fertilizers apparently help mediate this problem. Guess I'll pull out my 10-52-10 and my dolomitic lime bags for those hops.
A

Don't forget to kill the male plant. If the female flowers get pollinated, the contents of AA and BA of your cones will decrease dramatically.
OP

Not gonna do that buddy!

From what I heard the drop in quality is mostly related to the increase in (dead weight) yield. Commercial UK hops are packed with seeds anyways.

Don't really care much in any case, the seeds are what I'm after. If all I cared for were standardized named cones I wouldn't bother with any of this and just buy them at the store.

If anything, I'm sad I only have one flowering male. Next year I should have a bunch from different origins though.
P

ain said:
Don't forget to kill the male plant. If the female flowers get pollinated, the contents of AA and BA of your cones will decrease dramatically.
Click to expand...

Untrue, as Apimyces stated the drop in "quality" is more related to dead weight. Also, the fact that seeds can lead to new plants and potential introduce off-types into a yard with "varietal purity".
OP

PapaBearJay said:
Untrue, as Apimyces stated the drop in "quality" is more related to dead weight. Also, the fact that seeds can lead to new plants and potential introduce off-types into a yard with "varietal purity".
Click to expand...

Right, off-types are probably the biggest threat for commercial growers. Not sure how they manage that in the UK?

Not an issue at my scale, though. Noticing seedlings is easier when one has dozens of plants rather than dozens of hectares of plants.
OP

Saw a green leaf hopper on the one plant that has the symptoms most akin to hopper burn.

For the hopper I saw lots of white skins. Mults or corpses? Reminds be of what parasitoid wasps do with aphids.
OP

New pest detected: aphids. I see a few in the cone, maybe 3-5 per cone. Will this be a problem? Haven't noticed an infestation on the leaves. They just got there recently. Only checked my Brewer's Gold because that's the only one with advanced cones for the time being.
OP

B
Diagnose my hops disease

Hops for those Canadians!