Found this score a local small town Bottle Shop. The clerk said they were not selling good, so I asked for a discount to help sales. I told him hoppy beers are quite popular and sales would probably catch on. Thinking to keep DFH local and available. Pictured with Der Hurscch-Brau Hefeweisse 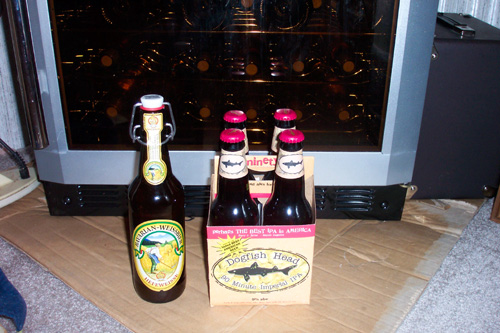 How much of a discount did you get?
OP
OP

Tried for 2 for 1, but he stood firm. Rather keep them available.

If I get one a week until the big sale I'll do good.
A

Heh, a local grocery store here sells them for 8.99 a four pack. I've always wanted to try but never could justify that much. The store is a pretty big chain, but in the one I frequent they just put up some "pick your own 6 pack" shelves. They split up some packs and you can mix and match.

They have a bunch of sissy beers, imports and micro brews. The sign says 7.99 a six pack so I decided to try it out when I saw 3 bottles of 90 minute IPA there! I loaded up on that along with some local Smuttynose brews and checked out...

Little did they realize the pack rings up at 6.99!!! So I keep coming back, keeping my eye out for 90 minute IPA, so far I've snagged a bunch, once there were 4... so I basically got 4 for a fraction of the cost!

Great score, ride it out. The Flying Saucer in Raleigh( Great Place) Sells pints for $5, so $2 a bottle is fair for good beer.