My only question is that I had to take the lid off for about 3 mins or so to clean it and hook up the blowoff... Think that 3 mins ruined me??.. still fairly new and not sure how touchy it is...

You'll probably be fine as long as the rest of your sanitation procedures are sound. Sometimes frequent blowoffs can be a sign of a warm fermentation. What temp are you fermenting at?
OP

75ish... probably exactly the problem.. I live on the 4th floor of a apartment building.. hard to control the temp.. especially fall in Canada.. when the temperature jumps everywhere...

Quite sure the rest of my sanitation was up to par.. Im pretty careful..
OP

even bigger problem now... The lid is swelling right up.. seems like the air cannot get out of the blowoff quick enough... if I take the plug out the krausen starts coming right out of the hole.... any ideas.. I dont know if you will be able to see the swell with this pic or not but I figured Id try... 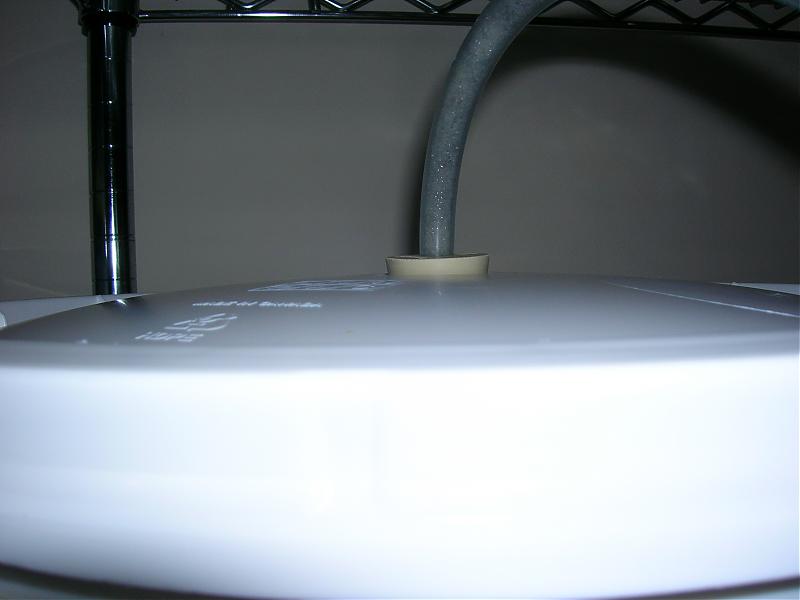 That is a bit warm. Remember that fermentation is exothermic so the internal temperature of the fermenting wort is a little higher. You might start to get some fruity esther flavors if you can't get it a little cooler. Can you do the water bath technique?

Uh-oh. Your tube is probably getting clogged with hop debris. Try blowing into the end to clear it. Be careful, if it works it will fill your mouth if you're not quick!
OP

it seems like there is air pockets or something.. I dont know if that makes any sense.. but it will go slow for a bit then let out a big fart..... and everything just shoots out of the tube..


Anywho, good luck... I have been fortunate enough not to have that happen to me...
OP

lol... ok "Duckfoot-master of the boilover".. lol.. sounds like we both know how to make a mess..

Get that thing cooled down. You say 75ish but in the center that thing is most likely pushing 80.

Fill up the bath tub with cold water and put the fermenter in it. Throw in some ice too, as much as you have.
OP

Bathtub full of ice is not an option with SWMBO... I got the window cranked tho and it is cooling..

FSR402 said:
Get that thing cooled down. You say 75ish but in the center that thing is most likely pushing 80.

Fill up the bath tub with cold water and put the fermenter in it. Throw in some ice too, as much as you have.
Click to expand...

man, i wouldn't want to be around if that lid pops off. if you can't use a bath tub, get a rubermaid container and fill it with water. that's what i did and threw in a frozen bottle of water and an ice pack and got the temp down to 65 degrees when my closet temp is 74. as an extra measure, i threw a wet t-shirt around it too. whatever route you go, good luck, looks like you may need it!!
OP

ok.. at my LHBS they always told me not to use a airlock for primary.. just put the lid on and dont snap it.. never had a problem when I did this... ever since I started with the airlock Ive been getting a mess.. so for now I just put the airlock back on and unsnapped the lid and set it on looslya... hopefully this works.. then when it slows down a little I will snap the lid back on..
OP

ok.... rubbermaid container-check, water-check, ice-check....hope this works.. do you guys have to do that everytime?.. or should I just do the water and ice thing when I get blow-off... dont think I will lower the temperature to much?.
Thanks alot for the help guys!!.. really appreciate it..!

The water bath with frozen bottles and/or use of a wet tee-shirt are low-tech ways to get fermentation temps a little lower. Others have designed small 'refrigerated' chambers out of styrofoam that use small fans and frozen milk jugs to drop temps even more. Check out the DIY section for links to designs. If space is an issue, the water bath is the way to go.

had the same problem (for the first time) yesterday, looked in the closet and the lid looked like someone put half a basketball underneath, relieved the pressure and it seems to be okay now, i think mine was to do with a lack of headroom as my temps are pretty cool in the house. i hope. good luck

I need to change that too... It should now read "Killer of Hydrometers" after I busted the THIRD one since I have started... SONOFAB!TCH!!!!
OP

on my 4th racking cane too.. LOL

I always use my ice cube cooler with water & ice packs during primary. My basement is 72ish in the summer, and I had an amber ale turn into a banana bomb due to high ferment temps this spring.

One batch with off flavors will convince you that temp control is worth it.

s3n8 said:
I always use my ice cube cooler with water & ice packs during primary. My basement is 72ish in the summer, and I had an amber ale turn into a banana bomb due to high ferment temps this spring.

One batch with off flavors will convince you that temp control is worth it.
Click to expand...

Yes this is why you must keep the temps in check. Not for the blowoff but for the off flavors the high ferment temps will make.
In the summer I use the rubbermaid tub with water and ice for the first week of ferment. My fermenting room is 67* in the summer and down to the upper 40's in the winter. So in the summer hot months I only have to drop it a few degrees and in the winter I run a heater to keep the temp up.
G

so how's it looking today? any better? afterall, i guess it couldn't look worse, lol!!!
OP

Yeah it is looking alot better now.. I put it in the rubbermaid with water.. cooled it off.. un snapped the lid and just have it resting on top.. the krausen is starting to fall..
G

glad to hear it. good luck with the rest of the brew.
T

The easiest fix is move to move to Maine...... perfect temps in summer for ales and perfect in winter for lagers...problem solved!!!!(other than the fact that my beer may be floating in the basement tomorrow after all the rain we are getting!!!!) Good Luck!!!

I agree with most of the comments I've read. When I started brewing a little under a year ago, I was following directions and just chilling to 80°F. While the beer produced was fine, I had several batches that would boil right out of the airlock. Then I read something on one of the forums and started letting the water run through my chiller (we're lucky, and have 55°F well water) until I got <70°F. This solved the blowoff / foamout problem. Well....almost. When the floods hit in June, the foot of much warmer runoff water that got into my basement instantly jumped the temperature of my nice 60°F basement, and I had just started the fermentation of MW's Imperial Stout the day before. The results were that I heard the lid blow off from upstairs! I cleaned up with a sponge soaked in Star San and reattached the lid. No worries about cleaning up the floor, since I was standing in a foot of water at the time. The same thing happened again an hour later, so I just left the airlock out and put the sanitizer soaked sponge over the hole. When fermentation settled down, I cleaned everything up with the sanitizer-soaked sponge and reaffixed the airlock. When I racked to the secondary two weeks later, the fermented beer smelled and tasted normal (and had fermented out very well, hitting its FG with no problem). I don't know how that batch is going to turn out, since it's still sitting in the secondary awaiting bottling.
OP

tblake2 said:
The easiest fix is move to move to Maine...... perfect temps in summer for ales and perfect in winter for lagers...problem solved!!!!(other than the fact that my beer may be floating in the basement tomorrow after all the rain we are getting!!!!) Good Luck!!!
Click to expand...