This is a nod to Cream of 3 crop recipe by Biermuncher that my friends all loved and raved over. For me the original recipe had a bit too much sweetness from the corn and I wanted to experiment a bit and try for a light version of it to reduce carbs and calories while maintaining the ABV. I think the minute rice caused me to over shoot my OG. I was going for 1.032 but ended up with 1.037, which made my final ABV 4.7% instead of the 4.2% I was aiming for. In the secondary additions, make sure you use glucoamylase, not alpha amylase. This will drive the FG down. Again I was going for 1.000 but ended up with 1.001 but I'm happy with that. Tailor this recipe for your liking with the ratio of grains. I wanted less corn flavor, but I have to say that even at 7% of the grain bill, I got a lot of corn sweetness, though it wasn't over powering like it was with the last time I did the full strength cream ale. I used centennial hops because that's what I had extra of laying around and it got the job done. At 11 IBUs any hops will work and not have much flavor. Carbonate to 2.7-3 volumes

Now I know, you all are asking, "Why in the heck would you want to brew a watered down, no body no flavor crap," and I would say that you have a good point. But a big reason why I enjoy brewing is to share with my friends. They don't always go crazy for 2 hearted ale or some of the other beers I enjoy drinking. So I have 2 taps that I keep 1 beer on tap to appease the masses (I still have fun with this from Hefewizens and wheat beers with fruit, to beers like this) and 1 tap for more traditional craft beer where I can mix it up a bit and serve different things. I wanted to try to brew a light beer for cheap with less carbs and calories that was very tasty and I accomplished that. Think Miller Lite with flavor. This grain bill was around $16 for me, which included the yeast and I didn't need any hops. I harvested the yeast so it should be closer to $11 plus the cost of the RO water. One other thing too is you can show off your brewing capabilities. A beer this light pretty much has to have everything go right, temp control being a big one. I was worried about it with my gravity overshoot which I tried to adjust but didn't get to where I wanted. So if you can pull this one off and have it taste right then you are doing alright!

I'm posting this in the ale forum because of the original recipe being a cream ale, though by the book this is actually an American Light Lager. With the W 34/70 yeast you can ferment at warmer ale temps, though for the sake of time I believe next time I am going to try S-05. The W 34/70 yeast finishes extremely crisp and clean and I love the flavor, but if I can trim off 2 weeks of conditioning time with minimal trade off, why not. Research shows very little difference between S-05 and warm fermented W 34/70 so I think either yeast strain would be great. WLP001 would also be a good one. My biggest issue with W 34/70 is the sulfur it kicks out which needs time to clean up, which is why you lager it. I would have liked to lager longer but I needed my ferm chamber back at ale temps for my holiday ale I'm doing so I only did a week. The nose of this beer is definitely different than the ales I have done, and even though the gravity is 1.001 it still has a lot of flavor. I'm going to play around with the ratio more, might even cut the corn all together just to try it out.

Cloudiness is humidity on the glass. It is crystal clear. 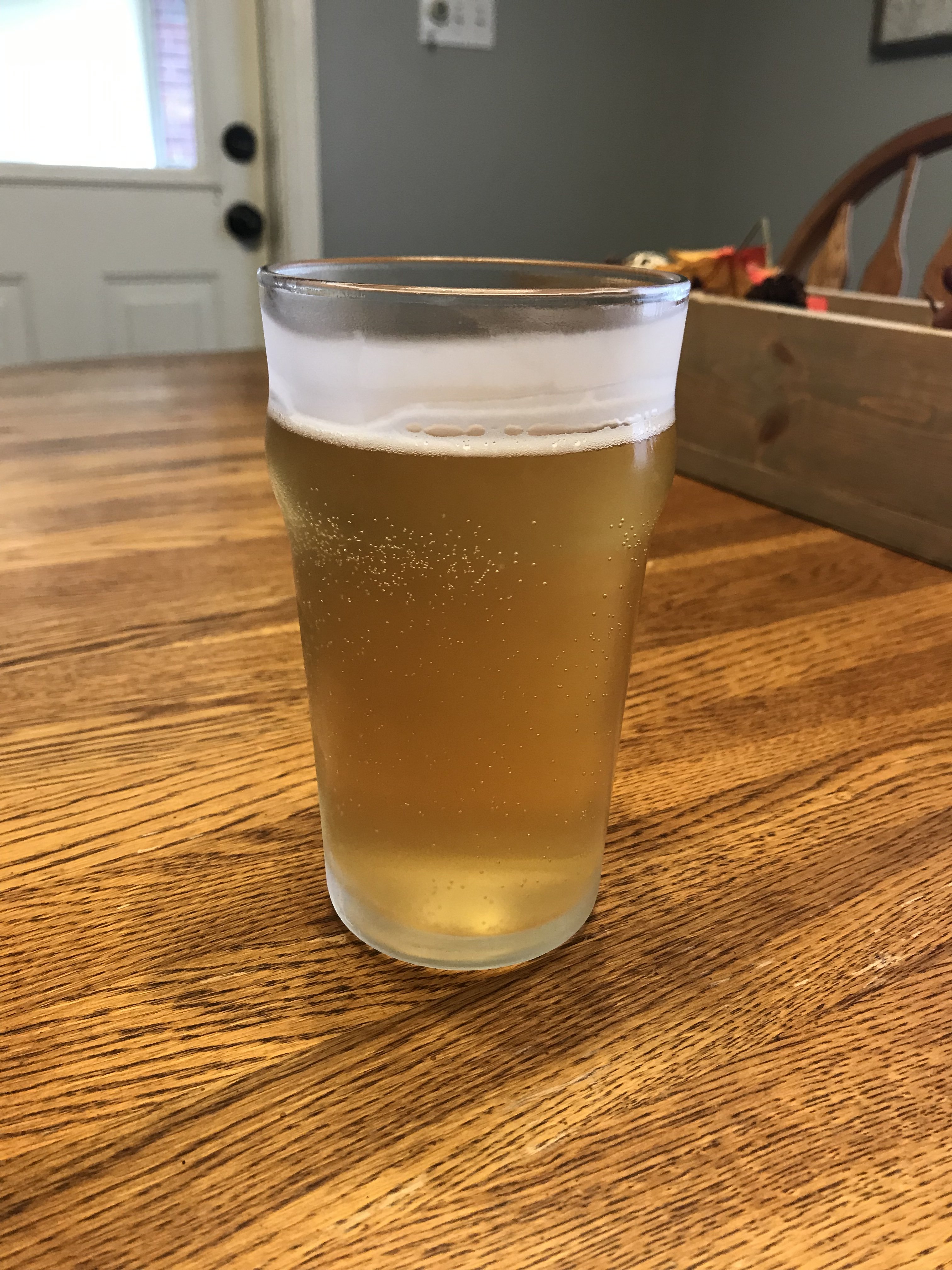 I actually modified my cream ale recipe, which is a riff on the cream of 3 crops, and it's my brut IPA. carbing right now but the sample was tasty.

What are you getting from the glucoamylase? What if I dont secondary?
Are you clarifying with anything?
Thanks!

I used whirfloc, but my first cream ale was super clear without it. It's fermented down to 0.995. this is a picture of the first cream ale. I'm out of town until Saturday, but I can pull some then. 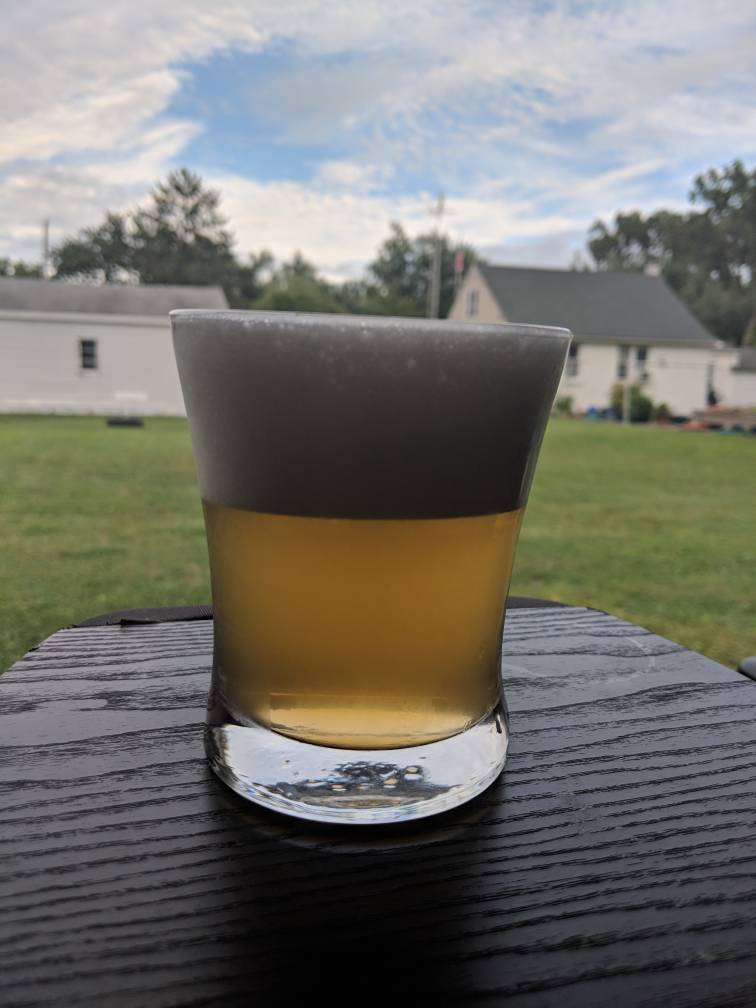 mux11 said:
What are you getting from the glucoamylase? What if I dont secondary?
Are you clarifying with anything?
Thanks!
Click to expand...

I’m not a micro biologist but the glucoamylase basically takes the stuff that isn’t fermentable and makes it to where the yeast can consume them and make more alcohol from the sugars. You don’t have to secondary. I’d wait until the gravity stabilizes like normal then add it into your primary vessel. I clarified with whirlfloc and a cold crash.
You must log in or register to reply here.
Share:
Facebook Twitter Reddit Pinterest Tumblr WhatsApp Email Link