Cool photo at bottom of thread, but I also need help with fermentation 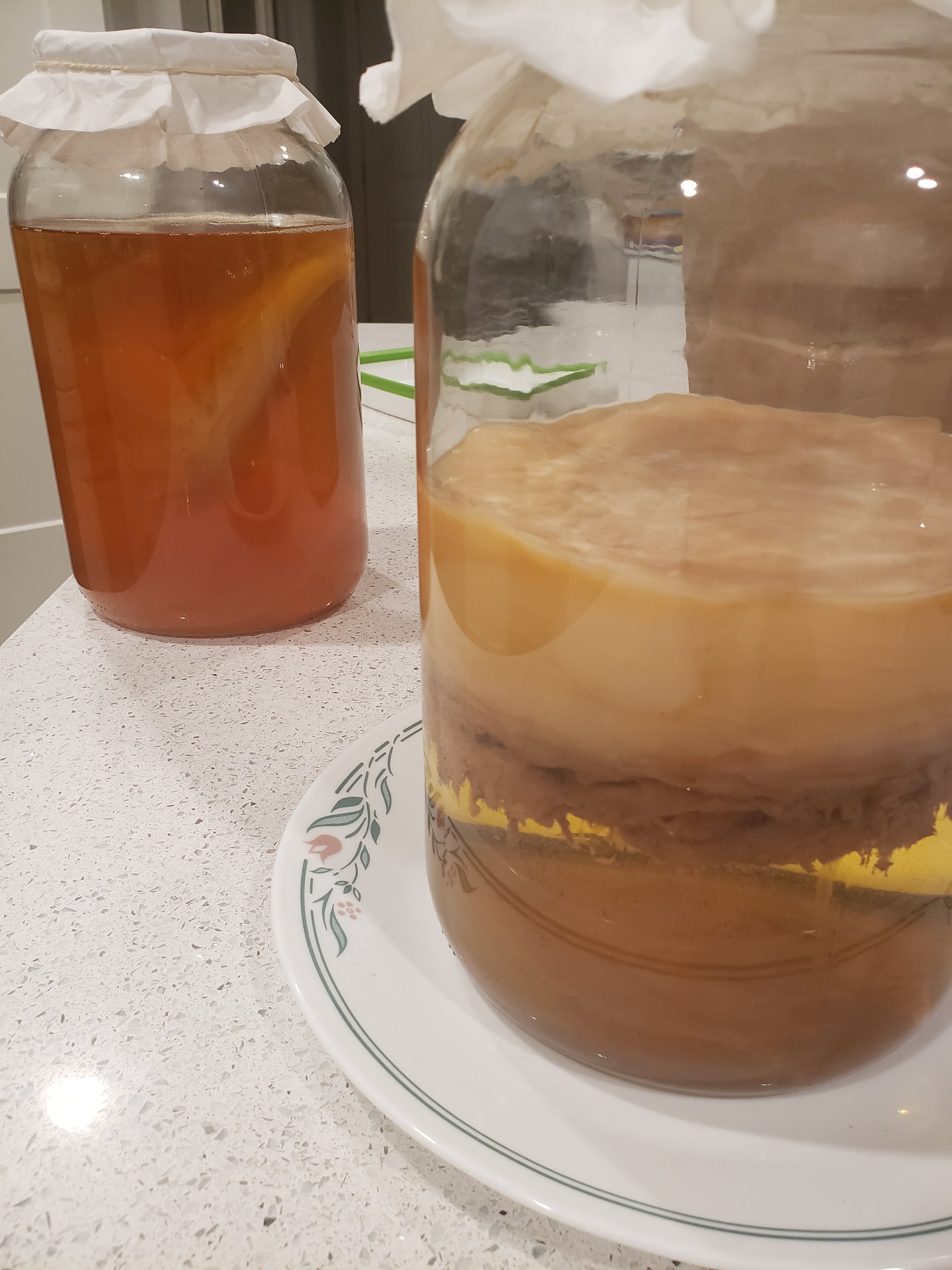 I'll go over what I did and see if anyone can help figure out my next steps!

-Scobys have been in a hotel for about 8 months.
-Took one out (same size as front jar), and sawed it with a bread knife as I couldn't peel it.
-Kept the top and discarded the rest of the scoby
-Made a new batch of mostly black tea and some green as I had always done. Yep, a cup of sugar too was added.
-I got rid of the creepy looking goopy stuff at the bottom (see the image below), but kept a cup of the liquid to add to the batch.
-I checked it after 8 days by taking a spoon to the top of the scoby, pushing down slightly to get liquid onto it, and it tasted very vinegary. So I decided to bottle it.
-Almost certain that the strong vinegar taste was just from the layers of the scoby getting pressed out, and not representative of the whole brew now that I think of it.
-The bottles took more than 5 days to get some carbonation and when I tasted it, it was extremely sweet. This is because I clearly didn't ferment it enough.

So here's where I stand today. I brewed a new batch 2 weeks ago using that same scoby. It is still sweet tea and not acidic. There is some additional thin scoby growth on top.

What should I do? I have another giant scoby I could use that's chilling in the other hotel. I don't know what I did wrong so please ask for clarifications or point out where I may have misstepped.

Also, here's a gnarly photo of the bottom gunk after sitting for so long! To me it looks like people wearing ghost costumes; like a blanket over the head and arms.

I have to keep my temps above 76* in order to get complete fermentation. The starter tea reused for the next batch has to be fermented to the point of puckering acidity in order to kick start the new batch. It's important to get a new scoby in 2 days , that will keep the uglys away.
OP
OP

My house has always been 70*, except for when I let the scoby just continue to ferment in the basement, which is probably 63*. I didn't understand your comment about needed a new scoby in 2 days. Are you saying that since it's not fermenting it will begin getting some bad growth in the sweet tea? If so, makes sense to me. And would also imply that I should use a new batch of sweet tea, and I'll probably cut the giant one from the other jug and attempt this all again. Good plan?
H

Once you have tea that's acidic ,mine are at 2.85 pH,you can just repitch the liquid and compost the scoby. The faster the scoby forms is a sign that the micro flora is fermenting and lowering the pH. I add about 16 oz strong starter tea to a 2 gal batch of sweet tea and ferment at 76-78* and bottle between day 14-21. I insulate my crock and use a reptile heat mat with a rheostat. If it gets 86* or more it ferments in 7-10 days and is very sharp. I need closer to 21 day ferment and it's smoother at 78*max.

Zippox used what is called "Acidifier".

Also, I'll say it again and again... if you don't know your pH, you're flying blind. Buy a cheap pH meter for $15, or some litmus paper... you'll have an idea of what ballpark you're in.
OP
OP

Should I ditch the scoby since I used a normal 1 cup worth? Or keep the scoby and make a new batch of tea that has 1/2 cup of sugar?