This is for AHS Apocalypso brew partial mash.

Just curious if anyone has tried cold crashing and gelatin to clear out a beer or whether anyone thinks this would be extreme overkill?

I'm leaning towards the side of overkill as CC (cold crashing) is going to get enough of the crap out of suspension to drop and if I bottle cold, it will leave a pretty compact cake as it's cold it's not going to move around as much when transferring to the bottles.

However part of me says add the gel then CC it and see what happens. The only thing is I don' tknow that it's going to do that much of a difference from just CC it.

I'm open to suggestions or if noone has tried, I'm open to doing it and uplaoding pics too if anyone has pics of the Apocalypso that's been CC or whirlfloc or whatever method.

For finings to work the beer really has to be cold, otherwise the beer will still cloud back up when it's chilled.

I do both and get crystal clear beer after the first few pints. It may be just fine cold crashing, but I'll keep doing it this way. And as malticulous said, it works better when it's cold.
OP

Well it's decided then if there's someone out there that gets crystal clear results doing it, then I'll do it too.

All I really wanted was to see if someone had tried it and if it made a difference. So if it did then I'm all for going the extra step. Hell sugar, color, and taste free gel is only a buck anyway and there's 4 bags in the pack. I can afford $.25

I would never gelatin without cold crash... and it does work. I don't even use kettle finings any more.
H

I thought gelatin was added at secondary?
OP

Yeah the Gelatin is added at the secondary then you stick it in the fridge is my understanding.

It just makes sense to me that way if you cold crash then add gel, the gel won't be able to disperse properly as it's being thrown in a cold mix.

If you want to get rid of chill haze, it has to actually be present for finings to work...

Yes, I understand how it works. I don't have room in a fridge to put 4 carboys full of beer. We normally rack to secondary for 1 week then keg and carb for another week. We then store finished kegs in the basement until needed. Then they are put in the fridge for pouring.

We have had a few issues with chill haze and are working on a solution to solve it.

We added gelatin to the secondary last week and will see if this helps.

Chill haze reduction = strong boil, whirlfloc/irish moss, rapid chilling - the idea is to get at it early rather than dealing with it in the fermenter. I don't have any chill haze using the above methods.
H

We do all of the above and still occasionally get it. We're trying the gelatin addtion to see if it helps.

I add it a day after putting the secondary or keg in the fridge. I might should wait two days. The beer may still be over 40F. I haven't taken a temp. I serve my beer cold (32F) but it warms up to 50F or more in the glass. If you serve over 40F you might have chill haze and never have seen it. If there is no condensation it's not cold.

samc said:
Chill haze reduction = strong boil, whirlfloc/irish moss, rapid chilling - the idea is to get at it early rather than dealing with it in the fermenter. I don't have any chill haze using the above methods.
Click to expand...

Yeah, I do all of that (rolling boil, 1/4 tsp of IM per 5 gallons, and flame-out out to 68°F in 14 minutes flat) and can still detect the haze about halfway into a crash cool.

But once the carboy hits 34°F and sits there for a few days it comes out nicely bright and ready to keg, without needing to mess with finings...

I added the gelatin to the AHS apocalypso today. I normally don't mess with finings too often as I like beer that hides your hand on the other side of the glass when you drink it.

However my Dad is big on very hoppy beer. So seeing the hops used in apocalypso and there very high alpha acids I went with it. So I'm covering all my bases and probably being over cautious. However, better safe than sorry.

Irish moss, gelatin, and cold crash. It ought to be a very crystal clear beer by the time it's done.
B

I use a plate filter from Morebeer.com. Here was my last blonde. Crystal clear. 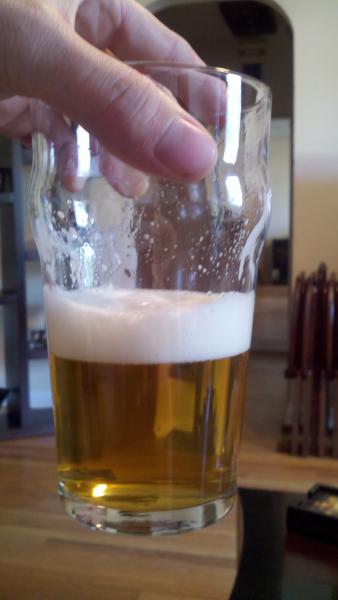 I tend to leave the primary be for a few weeks. This pic is of a Belgian blonde I had in primary for 4 weeks, the last 2.5 being at room temp. WLP400 flocced right out. I used whirlfloc in the boil but that was it. 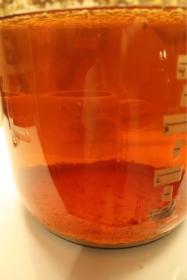 Well I ended up throwing in the gelatin and cold crashed it for almost 4 days and just got finished bottling it. It's pretty damn clear too. I always drink the last beer I bottle as it's never a full bottle so I pured it into a glass to take a look and it's pretty crystal clear and it was the last to be filled in the bucket so it would have had more crap in it than anything else cause at that point I'm tilting the bucket. The hell with Folger's beer is good to the last drop!
You must log in or register to reply here.
Share:
Facebook Twitter Reddit Pinterest Tumblr WhatsApp Email Link

B
Noob, gelatin and cold crash

Gelatin and cold crashing a IPA