The flange nut and spring that holds the handwheel on my older (manufactured in 1994) CO2 tank has gotten quite rusty. The place that fills my tank won't fill it again until I replace them. I am finding this much more of a challenge than expected. I found a replacement handwheel with the hardware on ebay but the nut (5/16") turned out to be too large. So, I took the rusty flange nut to the hardware store and used one of those guides with different size bolts to figure out the size of the nut. It seemed to fit the 12/24 bolt. It's a less-common size but I found a nut, took it home, and... it's too small. So, I'm kind of stuck. Does anyone know if there is a standard size on tanks manufactured in the 90's? Or where I can find a replacement? I've been searching online to no avail.

The whole situation is frustrating because the tech who wouldn't fill the tank cited fear of the nut giving way under pressure but, as near as I can tell, the nut simply holds on the handwheel--it doesn't seem to hold any pressure. But I'm up against the wall in the face of his refusal. There is another place in town but they will not fill a tank--they will only exchange them. I am reluctant to take that route because my tank is pretty nice and I hate to lose it. But I may have to take that option if I can't figure out how to replace this nut.

I have attached a pic to make it more clear what I'm talking about.

It ain't all burritos and strippers, my friend.

donovanlambright said:
There is another place in town but they will not fill a tank--they will only exchange them. I am reluctant to take that route because my tank is pretty nice and I hate to lose it.
Click to expand...

It only hurts the first time. 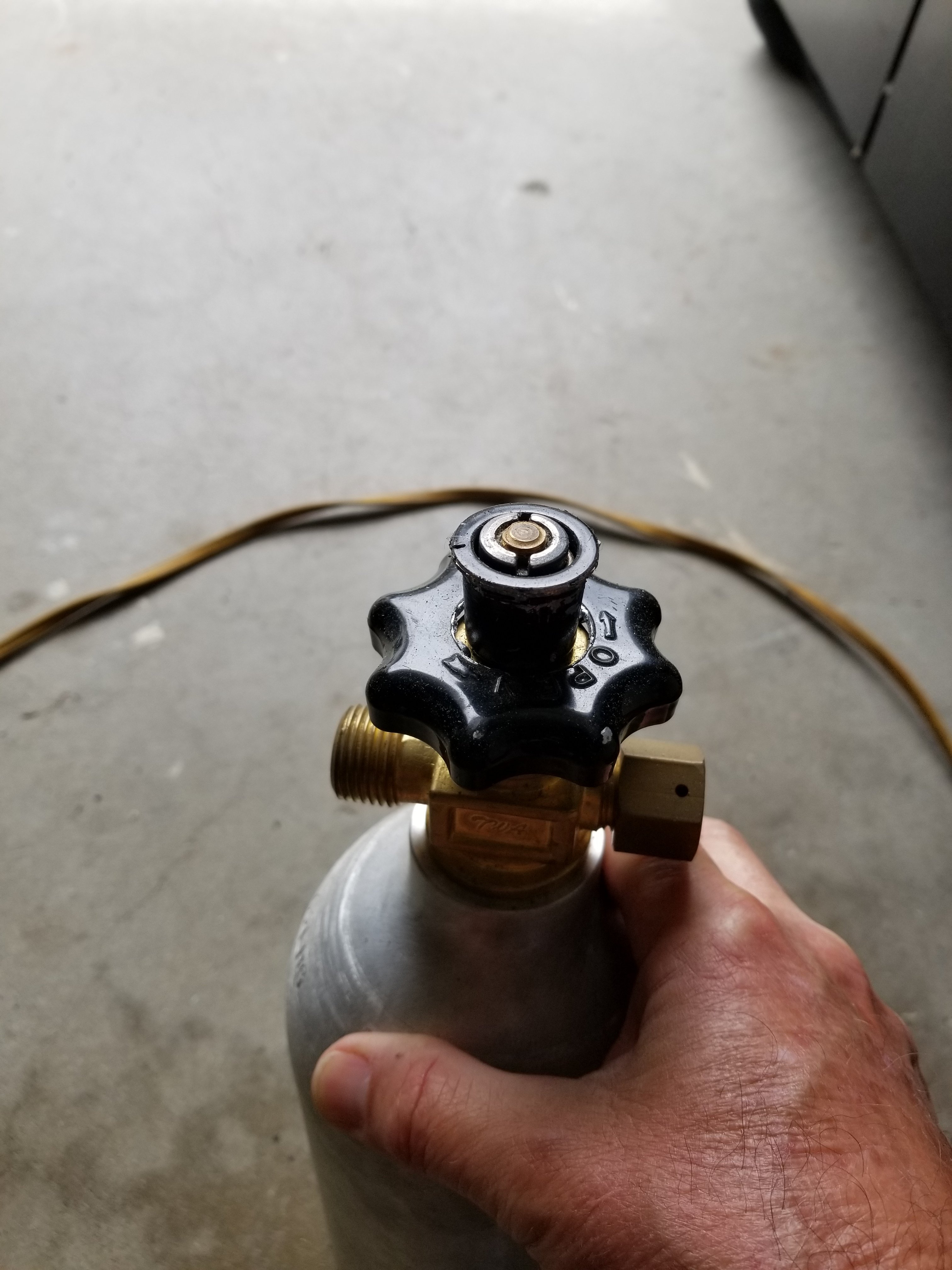 If it’s 5/16” it might be metric which would be an 8x1.25 or an 8x1.0 but that is not as common. That nut shouldn’t make a difference unless they are looking at it from the safety side of not being able to turn it off in an emergency. And like @VikeMan said it only hurts the first time, most places will try and give you an even swap, steel for steel aluminum for aluminum.
C

Why dont you power brush the nut & spray it? Find someone with a blasting cabinet.
Ed B
OP
OP
D

Thanks for all the great suggestions, everyone. I think I will try power brushing the nut. If they still balk, I'll just take it to the other place and exchange it.
D

There also is a product called naval jelly. It's a clear goo that one applies with a brush, it dissolves the rust then rinse it off.
OP
OP
D

I ended up soaking the parts in vinegar overnight and then working them over with a circular wire brush attached to my drill. Got them pretty clean.

But then, the supplier informed me that the tank was overdue for a hydrostatic test. Rather than pay for it, I bowed to the inevitable and went somewhere else where they just exchange tanks. As VikeMan noted, it only hurt once. And it's probably what I should have done from the beginning.

Never purchase a CO2 or oxygen tank. Trade them in.

Looking for CO2 supply in Vancouver BC