CO2 Levels in Beer: The Role it Plays

Beer is one of those beverages that has an important trademark: it is bubbly, effervescent and bright. CO2 is imparted by beer conditioning (by adding priming sugar) or by forcing CO2 into a keg, this element has a huge impact in our favorite brew, and can give very specific characteristics just by dialing it up or down.
According to the brewing literature and guidelines out there, each beer must have a certain range of CO2 to be enjoyed at it’s full, just as any style has certain ingredients and levels of IBU’s, OG or Alcohol.
The rule of thumb is :
- More CO2:
- Less CO2:


CO2 From the Brewing Point of View:

There are certain rules for CO2 in beer. One can stay tuned with the guidelines (like the ones of the BJCP) or break the rules and experiment with them, but by doing so it’s crucial to know why you are doing it that way, and the effect it has in the final beer.
For example: German wheat beers like a Hefeweizen has a threshold of 2.9 to 4 Vol.s of CO2. That is the high end for a beer, and it imparts a refreshing quality which is traditional and important for the style. This thins the body out a little bit. Dialing down the CO2 in this beer to, say, 2.0, could harm the drink-ability by leaving the body too heavy. The high precentage of wheat creates the feeling of a fuller body because of the high protein content. The high CO2 level cuts it down.
On the other hand, some beers like barleywines or stouts, benefit from having a low CO2 level. Dialing down the CO2 to 1.5 or 2.0 levels, enhances the body of the beer and makes it a more “sipping than drinking” experience.
We also have the Nitro- type of beers. These brews are injected with a blend of CO2 and Nitrogen (usually 25/75 % respectively) to have a unique mouthfeel, head size and retention. Nitrogen usually goes out of solution rather quickly, that’s why the use of a widget is common. This device is used to create a chain reaction in the beer that creates the distinctive head of beers like Guiness Draught. These kind of beers are mostly “flat” but the nitrogen and the low CO2 give a very special and silky mouthfeel.


CO2 From the Serving point of view: 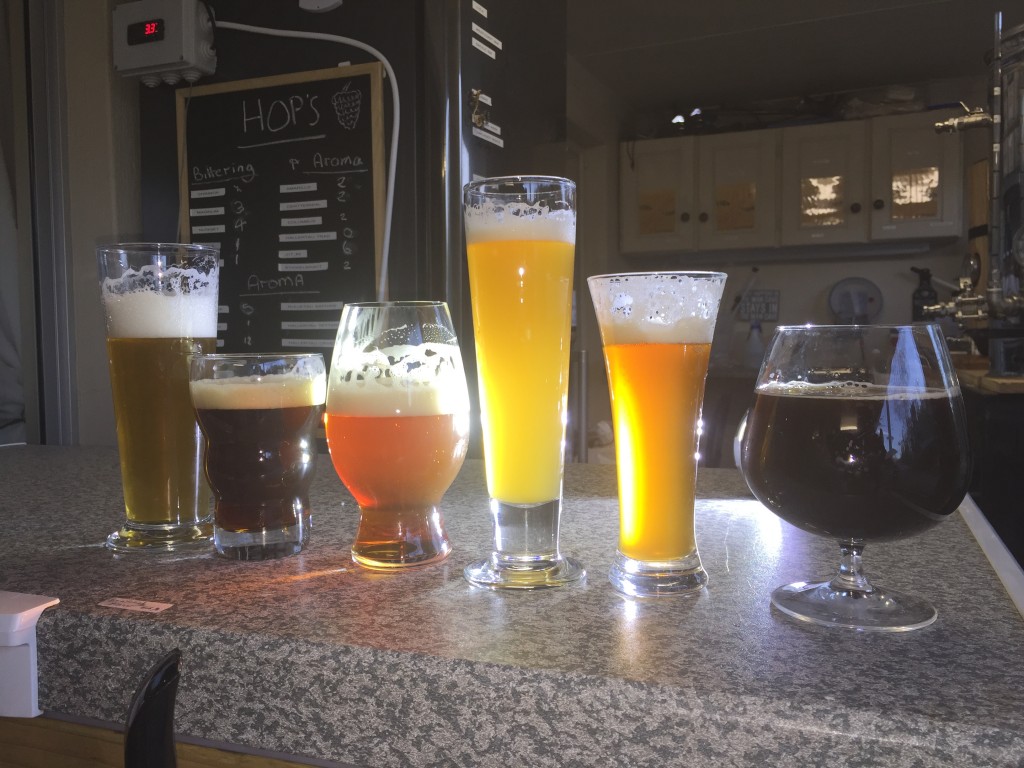 There are a lot of components that play around serving a beer. Knowing how they affect your beer is a game changer from having a good beer or a great one. We could talk about the interaction of fat and soap with the colloidal stability of the foam, but that is a different topic. One important point that many miss is the pouring of the beer, which can affect the overall experience of drinking it. The pour must be done depending on what style the beer is, which more often than not, tells us how many volumes of CO2 are dissolved in it.
For example: we could have a Pilsner with around 2.5 Vols of CO2. Serving it carefully at 45º would diminish the creation of foam, but when tasted, the beer could be felt as very carbonated and have a “fulling” effect on the stomach. But if we serve 50% at 45º and then pouring the rest at 90º, creating more foam and nucleation sites (the ones guilty of the creation of bubbles and thus, liberation of CO2 and foam formation) the CO2 dissolved in the beer diminishes and the sensation in mouth would be less carbonic and more forgiving with the stomach, while having that delicious tingling in the tongue.
In contrast, serving a Barley Wine with 1.5 volumes of CO2 that way (45º and then 90º) could be too much for it, releasing the little CO2 in solution and leaving a very flat beer. This beer should be served carefully at 45º all the way to conserve the CO2 in it.
Nitro-beers must be dispensed with a special draught system (or adding a widget in a can) so the mix of nitrogen and CO2 is the correct one. Using a normal tap or a can without a widget will achieve a flat-ish beer with poor head retention.
Finally, the serving temperature is also important. The colder the beer, the harder it is for the CO2 to escape from solution, and the more tingling you get on your tongue. On the contrary, warmer serving gives us an easier way for CO2 to escape from the liquid, resulting in a beer that will start to go flat more quickly.
Knowing the CO2 levels of the beer gives us a hint of how to serve it and why. Here is a general table of levels of CO2 for each style of beer:
Learn more about serving beers on nitro in this article
Last edited by a moderator: Apr 28, 2020

Thanks for the article. I can't tell you how often I miss the target level for carbonation. Good luck in with your project, live the dream.
Nice job, enjoyed the article.
Nice article. I would just point out that for me the style guidelines, if taken seriously, results in under-carbonated beer. But to each his own.
Yeah it's hard to hit the mark, mostly if it's by priming (harder with honey and exotic sugars). Definitely the best way to have same carb always is with CO2. Having a corney, a keezer and some CO2 is the next step for every home brewers!
Trying forced carbonation this weekend and set my regulator to 25psi. However, I didn’t hear any hissing sounds. I let it sit for 3 days and noticed that on day 2 the psi dropped to 10. Is that normal? Lastly, tonight I wanted to see if it was ready to drink so I turned off the regulator, lowered the regulator to 12 psi, pressed the release value to let air out of the keg (barely any hissing came out) and hook d up my out line and I got nothing, absolutely nothing. Any recommendations???
I've been searching for an answer and have been unsuccessful and I am hoping that you might have some insight! I am wondering why cask-conditioned Bitter vs. bottle-conditioned Bitter have different carbonation levels (with the bottle-conditioned ales having a somewhat higher carbonation)? I have googled and hunted around and I just don't seem to be able to come up with a satisfactory answer... I'd be grateful for any insight that you are willing to share!
Hi Josh! For what you say, I think you have 2 possible causes there: In theory, when you connect your CO2 to the keg at the beginning the hissing is because CO2 is getting dissolved in solution. The pressure must remain the same until equilibrium is reached between your cylinder and your keg. If your pressure went down is because 1.- your keg had a leak and CO2 was scaping, never getting dissolved because pressure never built up or 2.- your cylinder was almost out of CO2 and when trying to saturate the solution it ran out of gas.
The first one is solved checking everything in your keg is tight (not so much) and doing a test with some soap or iodophor dissolved in water: cover all the connections, if there are any bubbles, you have a leak.
The second one is shown in your regulator if it's in the red zone, it's dead.
Sorry for the late reply and hope you could solve your issue! Cheers!
Hey Kebn, BJCP 2015 guideline says:
"Traditionally served very fresh under no pressure (gravity or hand pump only) at cellar temperatures (i.e., “real ale”). Most bottled or kegged versions of UK-produced bitters are often higher-alcohol and more highly carbonated versions of cask products produced for export, and have a different character and balance than their draught counterparts in Britain (often being sweeter and less hoppy than the cask versions). These guidelines reflect the “real ale” version of the style, not the export formulations of commercial products."
Causes: I'm not sure. Some say is because of the "old" practice of higher hopping and alcohol for the "export" market (like Guiness Export?), but I don't have a direct source of the real reason. Hope I helped in any way. Cheers
You must log in or register to reply here.
Share:
Facebook Twitter Reddit Pinterest Tumblr WhatsApp Email Link

Mar 14, 2016
juszaias
J
K
There's Nothin' to it but to Brew It! Developing your own Homebrew Recipes

Jan 26, 2015
Tiddy
T
A
National Homebrew Day! We Celebrate the History and Culture of Homebrewing in America

M
Myths and Surprises in Homebrewing

May 1, 2017
bluelou
B
B
What NBA Players Can Teach You About Homebrewing