I brewed 2 batches of mead about 3months ago. After 2 weeks I racked from primary to secondary and its been sitting since and hasn't cleared up a whole lot. Should I be concerned or just keep waiting? I made some years ago but don't remember how long it took.
Here are a few pictures. I did use star sans which I believe is the white on top. 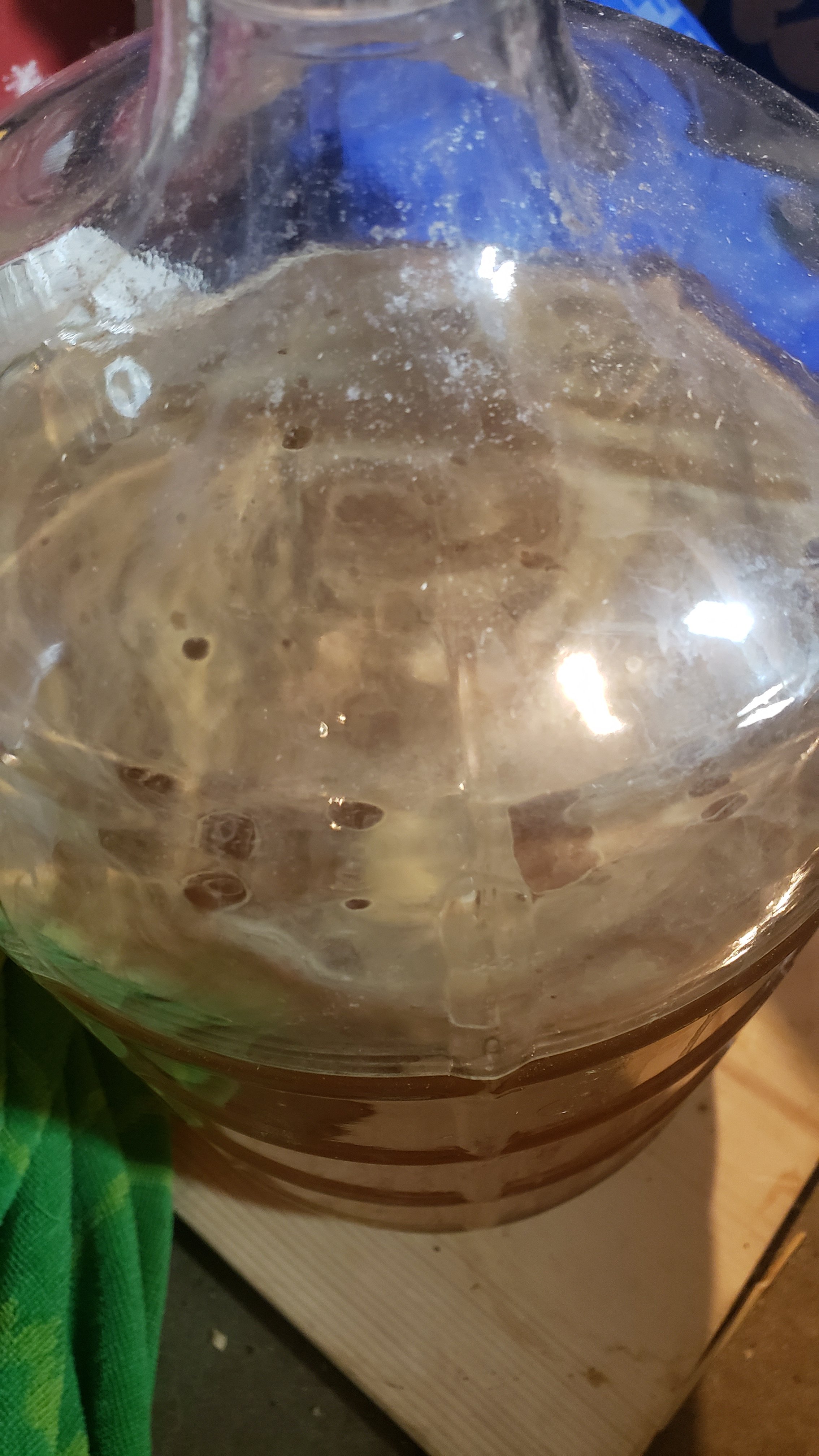 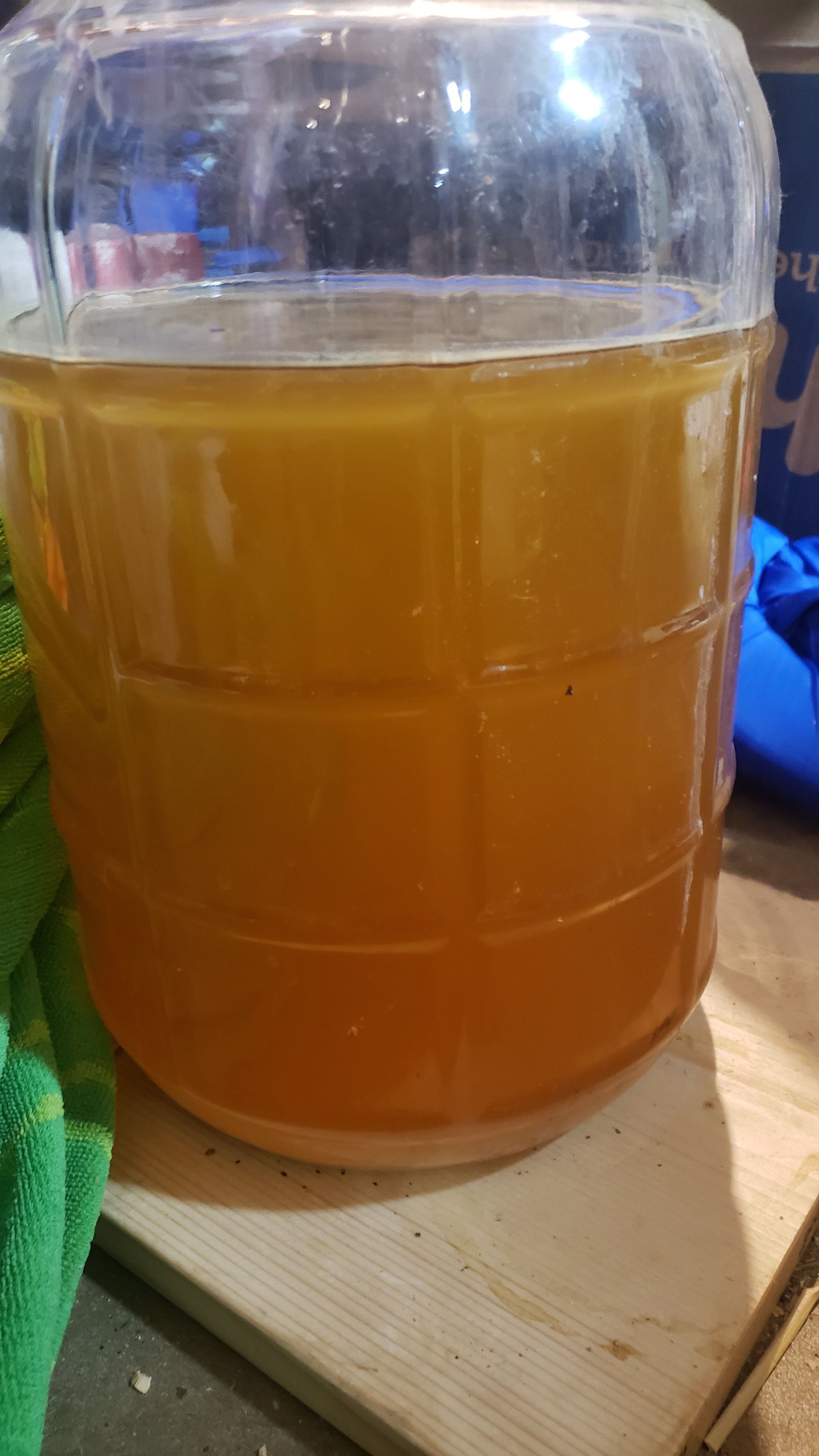 Just to verify, did you check SG before racking? I only ask because, in my experience, clearing can take much longer if it wasn't finished fermenting when racked over.

Mead clearing times can be quite variable in general though. I've had batches where the yeast drop out within two weeks in secondary and one batch that is presently eight months into secondary and still cloudy beyond belief. It depends on what type of mead is being made, the yeast being used, temp, etc. Three months is not atypical and nothing to be too concerned about. That said, if you don't want to wait for it to settle on its own, a fining agent like DualFine or bentonite will help remove the particles in suspension.

juskojj said:
I did use star sans which I believe is the white on top.
Click to expand...

That haze/film on the top is more likely to be pollen that was left in the honey, rather than starsan, that is, assuming you used raw unfiltered honey. I use starsan as well & have had batches where there is no film @ all & batches that have the film. It seems, the more that honey is processed, the less film you have. My local apiary does very little to process his honey, therefore, the honey I use from him always produces this haze. Harmless to consume & doesn't seem to change any flavor profiles.
As far as clearing goes, be patient, don't try to rush it. It looks, in the second picture, that you have a pretty good layer of lees on the bottom. I agree with @dvi, that if you rack too soon, it could certainly take more time, as the yeast have been significantly reduced before they were done cleaning up after themselves. I, too, have had batches that cleared in less than 2 weeks after fermentation was done, (FG 1.000) & I have others still that took upwards of 7 months. For ME, clarity isn't what makes it done or a great mead. For me, it's about how it TASTES. Clarity is for when you want to show, clarity is for giving away as gifts, but, for me, it has never affected flavor profiles enough to make a huge difference in the actual taste. My theory is, if it tastes good, drink it!

You could try cold crashing, but, that film probably won't drop out with the yeast. That said, I don't use fining agents, because, clarity isn't as important to me as it is to other people. Cold crashing is about as far as I go to clear it.
Mead is technically a wine, & wine improves with age. With mead, time is your friend.
I hope this helps.
Happy meading

With most of my meads it's taken 3-4 months and 2-3 rackings to have a completely clear mead. I do 1 G batches so often will store it in the fridge for a week to cold crash and occasionally will use gelatin to fine.
And..... when backsweetening, it often clouds up again, adding another couple of weeks.
You must log in or register to reply here.
Share:
Facebook Twitter Reddit Pinterest Tumblr WhatsApp Email Link