Chocolate Oatmeal Vanilla Milk Stout, or is it?

Just finished bottling my first stout and because I'm probably a sucker for punishment I went for the full monty on this. Was meant as a 5 gallon batch ended up with 4.85 in primary and bottles approximately 3.6 gallons (lots of trub). You'll have to excuse the extreme level of mishmashyness of the whole deal as I was trying to clean out some left over stuff thats just been sitting around.

6# 2-Row
2# White Wheat (I know not normal for a stout/porter, particularly in that large of a percent but yeah...)
1# Pale Chocolate
.75# Chocolate
1#Lactose
11.5oz Flaked oats (was originally going to do 16oz but this is just what was what I had in the cupboard)
7.3oz 40L
7.6oz Carapils (don't ask, it was there, it was milled, it ended up in the mash, no I was not drinking heavily)

3oz Cocoa Powder (was meant to be at the end of the boil, but ended up in the wort as I was chilling it right around 140F)

After a long day and an unintended 2 hour boil (so shoot me I don't do my water volumes perfectly) I got 1.069 at 71F (my hydrometer reads 1.000 at 70F). Really enjoyed the hydrometer sample at 1.5 weeks in primary (I think i was drunk when I took the hydrometer reading and didn't write it down anywhere). Due to the pack of wyeast 1275 not swelling that well, I ran to the LHBS and picked up my first choice (thames was second choice that I grabbed 1469 which suddenly they had in stock. So since it was already a mish mash of doom I just pitched the not so perfectly swelled 1275 with the more vigorously swelling 1469. Probably ended up slightly over pitching a little bit depending on the 1275s viability.

2 weeks of primary at 68F and 4 weeks in secondary on 4 vanilla beans (due trying to knock out a nasty flu I got during the 20F day I brewed this on so meant to be 2 weeks in secondary). Bottled this last week after a bad day of work that made it a decent Monday.

The good news in all of this I really enjoyed the 14oz "sample" I pulled and did the syringe nitro "carbonation" trick I saw here on HBT. SWMBO said "this is the best beer you've done yet" and I know that reading the jumbled recipe I put above would lead most people to think "was he drunk when he started to put the recipe together?" Currently waiting for the carbonation and conditioning but since I really enjoyed the sample out of secondary and I have high hopes for this when it's finished conditioning I'm looking at potentially making this the first beer I send for a competition (since I'm a sucker for pain).

Looking for suggestions on style category to submit under, my first impression would be to go with sweet stout, but as I'm lacking *any* roasted barley at all I know I could potentially get dinged for the lack of any coffee character (it might come out more later after conditioning). From the recipe and notes I mentioned above (I swear when I took the gravity reading before the 4 week secondary it was 1.025 or 1.024 maybe a little lower) should I just toss this in Sweet Stout and see what happens? The sample was really clean, lots of chocolate on the nose and flavor (not overpowering but is the primary flavor note) very chewy with a nutty sweetness (I know I'm an impartial taster here so shoot me). Attached photo evidence of the beer in question. 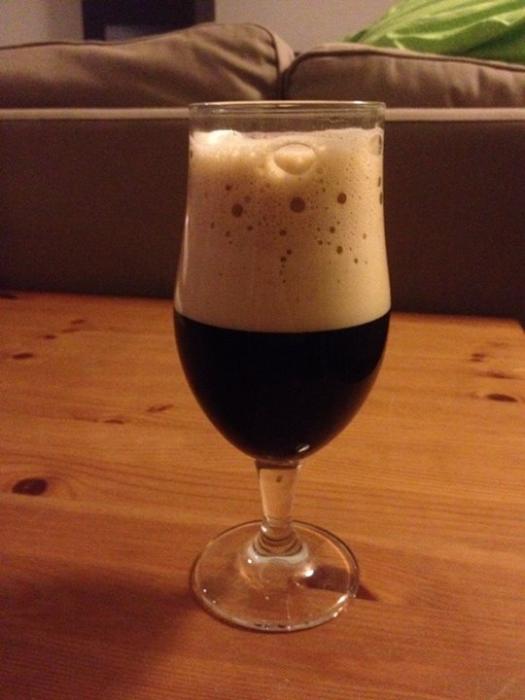 so how did this turn out? Did you enter it into a competition?
OP
A

I am going to remake this soon. The original was good but I was not as good of a brewer when I made it. I will be using the same basic recipe, I like it as a base for a stout. SWMBO liked it but I added too much priming sugar so the carbonation was very high which reduced the lactose/oatmeal mouthfeel. After two attempts on a different dry stout recipe I've dialed in my desired priming for a stout/porter.

I have 2oz of light toast oak chips soaking on rum with 2oz of vanilla paste mixed in that will go in this when I remake it.

I "might" add a half gallon to a gallon of sour cherry juice to make it a cherry stout, I'll double the oatmeal to try and keep the silky-ness in this case and maybe kick out the lactose. The pale chocolate/chocolate combo is great and I got a lot of compliments on the fruity esters (warm ferment and I love English estery yeasts)mixed with the dark fruit and caramels.

Edit: Forgot this part, due to the carbonation issues I did not send this to competition. It was popular with my homebrew club when we tasted stouts although the high carbonation dinged it. Popular with family at Christmas as well when I managed to knock out the carbonation while pouring and letting it settle.
You must log in or register to reply here.
Share:
Facebook Twitter Reddit Pinterest Tumblr WhatsApp Email Link