I had a hydro sample sitting on the counter for a few days and the thing started bubbling like crazy. I made up a 12 oz. starter yesterday and now that's taking off. How do you guys proceed from here? Should I make a 1 gallon batch of something simple just to see how it tastes? Any insight would be appreciated.View attachment ImageUploadedByHome Brew1482679368.272063.jpg

Brew with it. Duh
G

I wouldn't brew too much though, might be the greatest yeast ever found, might also be the worst.

I'd probably not bottle it either as it's behavior is unknown and you may end up with bottle bombs.
OP

GPP33 said:
I'd probably not bottle it either as it's behavior is unknown and you may end up with bottle bombs.
Click to expand...

Makes sense. Is there a threshold that it would be safe? Say it attenuated 75%+
G

alane1 said:
Makes sense. Is there a threshold that it would be safe? Say it attenuated 75%+
Click to expand...

Someone smarter than I would have to answer that, though I'd imagine not. Maybe 100%?

alane1 said:
I had a hydro sample sitting on the counter for a few days and the thing started bubbling like crazy. I made up a 12 oz. starter yesterday and now that's taking off. How do you guys proceed from here? Should I make a 1 gallon batch of something simple just to see how it tastes? Any insight would be appreciated.View attachment 381783
Click to expand...

How does it smell? Used my house yeast this morning, it's a workhorse.
I started small, brewed and split a gallon off and used it.

ChefRex said:
How does it smell?:
Click to expand...

If I were in your situation I'd probably use it in a 1 gallon batch. Monitor the fermentation and see where the FG ends up when confirmation of completion is apparent. Then bottle in PET to find out how it reacts after being primed and conditioned.

Then see what it does, took me quite few trys till I got something that smelt good.

You may have not only captured yeast you may have captured some bacteria Do a small one gallon batch to start with and only use equipment you do not mind infecting.

something funky fell off that leg lamp....

I did this a few years back. Tossed some starter wort into a white labs vial with 2 blueberries from my yard. Stepped that up to a 2l starter. Then brewed a SMaSH beer with it to see how it did.

It smelled and tasted very wit-like. This was great, but not a good yeast for a SMaSH. Brewed a few more beers, all Wits, to see what it would do....

My 4th beer I entered into a fairly large competition (650ish entries). I entered it into the Witbier category as well as the "Other" category. I figured the judges would find a kick of bacteria or something in it....

Nope! It won gold in the Wit category, and got either a 39 or a 40 in the "other" but didn't place. I've entered it in a few other competitions since then and it's done well (at least one other gold).

A few notes for you, as I've been doing a lot of experimenting with this since...
1. If it turns out to be anything good, keep a few jars of it around for a while. It will be damn hard to find that yeast again in your yard or wherever you found it.
2. I have been told most wild yeasts turn out to be Belgian-esque. I was bummed to hear that, as I thought I had something special, but I'm not complaining, it's doing well.
3. Mine takes off like lightning. It'll ferment fast and vigorous and be done in 3 or 4 days most times. Other than that, it acts and looks like most normal yeasts.
4. Experiment! I got bored of making Wits pretty quick. So I made a saison and used this yeast and left it in my garage at 90deg last summer. That Saison took Silver in a different competition.

I have been brewing 2 gallon batches and splitting them. 1 gallon gets the wild and 1 gallon gets notty, just so I can compare taste from the yeast. I'm keeping it simple and brewing different beers ~4% abv with simple grainbills and balanced hops. Mine has an interesting tropical fruit profile and ferements faster than the notty at 60*F. I want to find a good matching grainbill and scale it up.

I caught a wild yeast about 3-4 years ago as well.

First batch I did with it was 5 gallons of small beer. Figured I didn't wanna waste a brewing day, so went the small beer route from the batch I was already brewing that day.

For the second beer, I upped the alcohol a bit to give it more body and lowered the ibus from 26 down to 20. Strangely, that beer had absolutely no head retention like a coca cola. I figured there was lacto in there affecting the protein, but the beer never went sour and was very nice.

For the third and final beer with that yeast, I eliminated all character hops and used just FWH for a softer bittering and made basically a Dubbel. Raised the gravity again. With that one, the head retention is fine, so by repitching maybe I selected out more of the yeast and less of any lacto that might have been in there. I don't know. I still have some bottles of that and drank one last night. Still not sour after 40 months, so guess it won't ever sour.

With that third one, pitched at 68º and let rise to 76º over two days. 2 hours after pitching, the wort was fermenting. 5 hours after pitching and it was going crazy. Strong performer, fast fermenter and no fusels in a 8.3% abv beer fermented pretty warm.

Dunno if I'll use it again, but if so, I figure I can harvest from the bottle. Likely mostly dead yeast after that long, though, but this one was always strong, so who knows?

The character was Belgian. Nice mix of spicy and fruity and a bit unique. But I think it ran its course. Nice to try but not better than a commercial pitch.

Best of luck with yours! 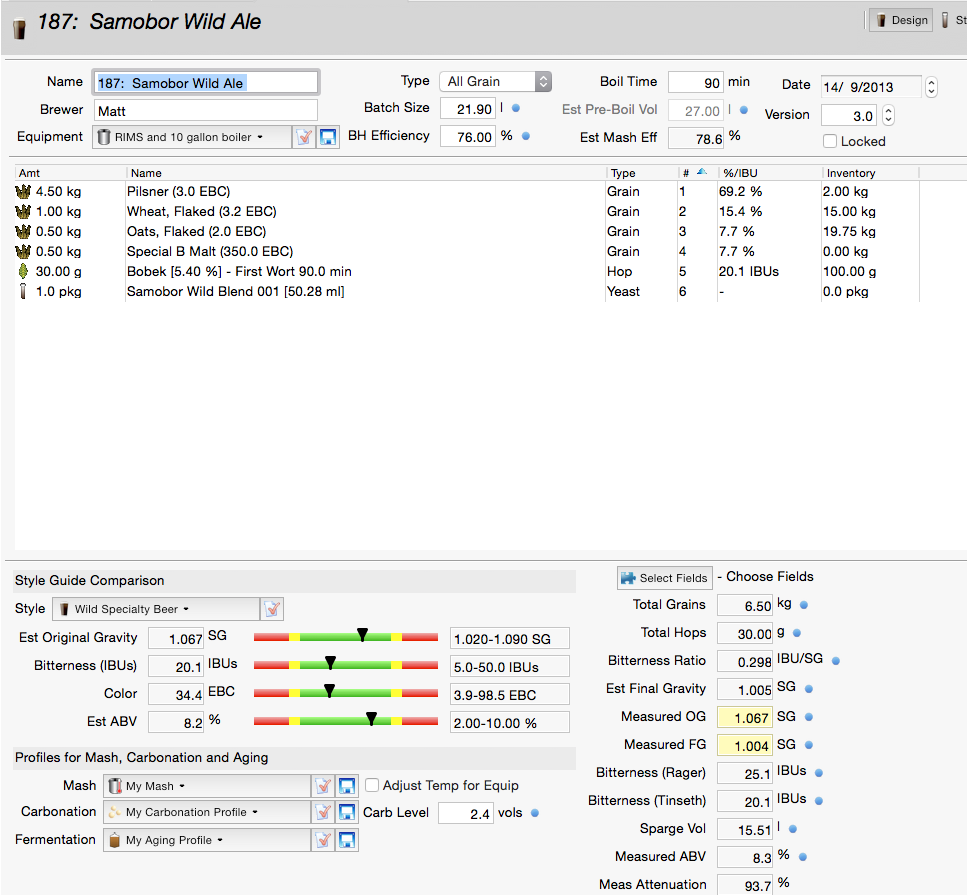 B
Used old yeast - what now?

B
Yeast didn't start, Now what?