Bubbling stopped after ~40 hours...should I look inside?

So this is my first brew, a nut brown ale. The kit used a standard cooper's brewer's yeast. I aerated it for a moderate amount of time, as well as mixed up the yeast after locking the fermenter (although not as much as I probably should've). The bubbling started up fine about 5 hours after pitching, followed by a LOT of bubbling for the next 20 or so hours...then it started to slow down and the following day it has pretty much completely stopped. Maybe one bubble every few minutes? Should I remove the airlock/plug to see if it's still foaming inside, as well as take the gravity (I can't really tell from the outside if there's still a lot of foam buildup or not)? Or should I let it rest for another few days? The temp is kinda low, about 61-60, but it was brewing pretty rapidly even at 62-63F, so I wouldn't think it'd be completely stopped at one or two degrees lower (at least for environment temperature). What do you guys think?

I'm running a small space heater in there (the closet) to pump up the temp to about 70, then I'll see if that will do much.

Don't even worry about it right now. It's very common to have very fast fermentations, but 20 hours is kind of pushing it. Taking the space heater in there is a good idea, just make sure that it does not get too hot. You don't want to push over 70F with a Nut Brown ale, maybe a Saison. Just let it do it's thing for the next few days. Give it about a week in the primary before taking the hydro reading and then you can decide when/if you are going to transfer to the secondary. Good luck!

even if it is done, no need to look. you will have better beer from waiting longer in any case.

No reason to look. Just leave it alone for a week before bothering with checking the gravity. I would just leave it in there for a couple of weeks and then bottle and not worry much about the gravity other than info on final ABV.
OP
OP

Alright, I'm going to leave it...however much I want to do something...I know that's just the beginner's inexperience in me...I'll take the gravity on monday, after the 7 day mark. Another question though, while I'm at it, I'm going to be leaving for 1.5 weeks at 3 days from when my brew will be in the secondary (carboy) for 2 weeks. Now, would it make a huge difference to bottle 3 days shy of the two week mark? The house temperature is going to drop a decent amount (though I don't know if secondary requires as much temp regulation). Or should I let it sit in the secondary fermenter for another week and a half beyond that? I'm just anxious to get it bottled, let that 3 week process begin, and get a second batch going.
S

I just signed in and happened upon this thread. Glad I did because I am in a similar situation. First brew. Brown ale and coopers yeast. I aerated a moderate amount and the fermentation really took off. Fermentation was essentially over in about 30 - 32 hours. Almost blew out the air lock so I switched to a blow-off tube. Its been about 10-11 days and I haven't looked inside. I am considering bottling this weekend after 2 weeks but might wait for another week. Does anyone have a suggestion about when to bottle? I think I will skip the secondary because fermentation was over so quickly I don't know if its reasonable. Any suggestions?

many, many folks on here will tell you to go a full month in primary then bottle.... I would wait until you are back, it can only help the flavors. Since it is in secondary, go ahead and start another right away, let that one sit in primary for a few weeks... then you will have a good pipline started... soon as you bottle, start another!
OP
OP

Kronin said:
many, many folks on here will tell you to go a full month in primary then bottle.... I would wait until you are back, it can only help the flavors.
Click to expand...

What about in the secondary? The kit calls to switch to secondary at around a week in, when the gravity is <1.016. I think I'll leave it though. Might as well. What about the temperatures though, how much do temps affect secondary?

Edit to Kronin's edit: See, that's what I was thinking too, but the kit instructions reccomend I siphon it back to primary, mix in sugar, and bottle...so I was going to wait, to have my primary usable when the time came to bottle. What do you think? 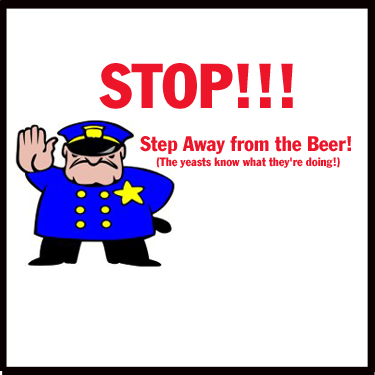 Leave the beer alone for at LEAST 14 DAYS!!! Then take a hydro reading...then decide then whether you want to secondary it or do what a lot of us do and just leave it for a month and bottle..

Your beer is fine!!!!!! You have typical new brewer jitters, like 50 other people have had today!!!

Your airlock means jack **** except that there's not any excess co2 to cause it to bubble, nothing more.... Read this to understand why airlock activity should be ignored for anything other than entertainment purposes...

Just because the bubbling has slowed down, doesn't mean that the yeasties are done with their work...they are pretty busy fellows, and if you leave you beer alone, you let them do what they are good at...

almost every kit i have done with dry yeast the same thing happened.. a day of viscious bubbling and then it stops... dont worry about it. leave it there for a week and then rack.

lolol I don't know how I would survive without these forums. You guys are awesome. I've been so excited and nervous about getting started with this stuff, and the only people that seem to understand this are the brewers, none of which are physically around me. Still, someone answer my question about second fermentation temperatures. And, hell, while I'm at it, has anyone bottled their beers in the screw-top Pellegrino sparkling water bottles? I have a pile of empty 40oz glass pellegrino bottles here...deciding if I should throw them out or not.

arover said:
Should I remove the airlock/plug to see if it's still foaming inside, as well as take the gravity (I can't really tell from the outside if there's still a lot of foam buildup or not)?
Click to expand...

Nothing bad can happen by not looking; the reverse is not true.

Jan 21, 2022
Zteelblade
Z
I
Blow off tube came out, put back in and is fermenting like I have never seen before