Stoked to get this project underway in the next few weeks...

The bar in my basement, "Puzzles" (How I Met Your Mother reference) to which I'll be adding a 2 tap tower in the center (right above the vertical green stripe in the center):

Crisper picture but a bit of a mess until the project(s) is complete. The laundry/boiler room is located directly behind the bar. Plan is to convert a 7.2 to 8.8 chest freezer and run a trunk line through the wall between the bar and bathroom (to the left of the bar in the picture).

My conversion kit from Kegconnection.com just came in yesterday and I should have my chest freezer either this weekend or early next week to get underway.

Going to look at a used 14.8cu ft freezer for $100 off CL after work today - a bit bigger than I originally planned but for 1/2 the price and double the size of what I was originally going to build with I think I can handle it being in service for 5 years

Go big with the freezer. Your bar is looking pretty damn nice. Get some good pics and it will look super snazzy I'm sure.
OP
OP

Picked up the freezer off CL - apparently it wasn't as large as the guy initially said but it was still $100 cheaper than I was going to originally shell out.

Keezer will be going in the laundry/boiler room behind the bar (seen below). It will be in the same spot as the dishwasher is now. Dishwasher will be moved down (to the right of the keezer) and that workbench is coming out.

Once my bank account recovers from this build I'll get the 2nd dishwasher powered/piped in so that I don't have to run my glasses up and down the stairs.

Little brew supply shelf that I built over the weekend and stained last night - plenty of room for carboys, ferm buckets, empty bottles etc since the disorganization of that stuff is killing me. Will get a shot of it loaded up (and my old school kelvinator beer fridge) once its in place later.

Brew supply shelf moved in to place and filled up 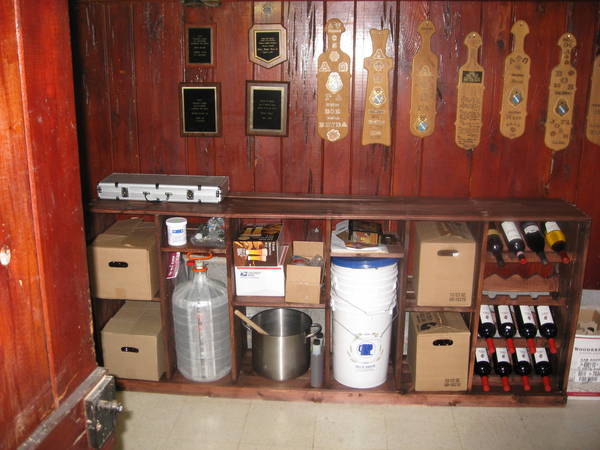 probe come in the back left - insulated with roll insulation from Lowes - secondary regulator so kegs can be set to different psi - swing open front so that I don't need to lift the kegs the added height of the collar. 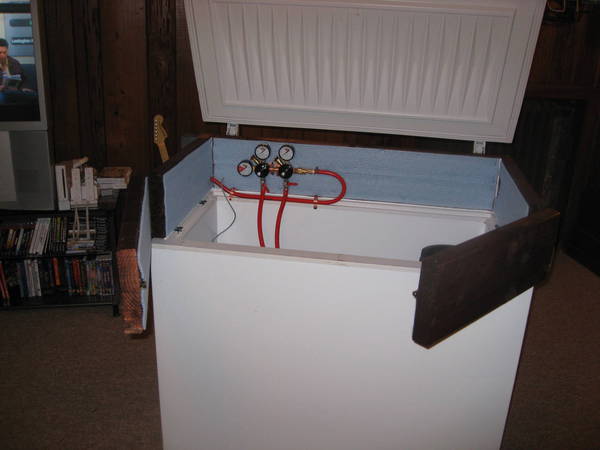 Inside shot of the Keezer (6th of Sam Adams Noble Pils ready to crack since I didnt time my home brew right). I have a corny to replace the waste pail for my glycol pool. 425gph pond pump from Lowes to a 3/8" ID Poly cooling line. There is a dual gauge primary regulator outside the keezer along with a 10# CO2 tank.

Shot of the trunk line coming into the keezer. Glycol in/out and 4 beverage lines - 2 in use and 2 in reserve (capped off) for future expansion.

Trunk line runs through the wall from the laundry/boiler room into the bar area.

Behind the sink and into the bar itself

and finally to the tap itself...I just need to swap out the hose clamps in the tower so it stops leaking and its ready to go!

Nice setup!
Just curious, how cold do you keep your chest freezer? (Mine is set at around 40 degress.)

On my new one, I don't get frost like that. On the old one (Craigslist find), it frosted up like that just before it died.
(I didn't mind too much it was free, and lasted about 15 months).
OP
OP

Yeah, good luck. I was keezer-less for a few months after mine died.
I was going to scour CL again, but finally decided to just get a new one and have it last for several (hopefully many) years.

Again, that is a great bar set up. I'd love to build something like that someday.