BruControl Uniflex: Automation For All

Wanted to start a thread about my journey from gas brewing to electric/automated brewing (with loads of help from BrunDog). This is really for all of you out there wanting to get into automated brewing but have little to no electrical experience to build your own controller.

I was a longtime lingerer in the automated brewing forum just casually drooling over everyone’s setups they were posting in there. I would research all the buildouts that people were posting trying to teach myself how to do them. The issue is my electrical experience begins and ends at plugging in a power cord to an outlet (not an understatement). I was completely intimidated by the wiring maps and equipment needed. Everyone kept talking about how simple it was but the last thing I wanted to do was attempt to build something then it doesn’t work (or blows up) and wastes all the money and time invested.

In comes BrunDog. He had hinted at the new pre-built BruControl controller that they were planning on releasing. I tried to be patient but had to email him every couple of weeks to see where they were at in the process. I think I finally annoyed him enough to be offered a chance at buying their final prototype in exchange for testing it out in real life environments and providing feedback and results. I had two shiny new electric Spike kettles that were waiting on me to use them so it was something I could not pass up.

Once I received the Uniflex controller, BrunDog emailed me the initial configuration files to install on my computer. This took all the work out of the initial setup because all the inputs and ports were already programmed and lined up. I was worried I would mess up that portion, but everything was already there for me. It was really plug-and-play which was exactly what I wanted to do.

I did a quick water test to familiarize myself with how everything worked. I was amazed how easy it was. I set the PID to reach what would be my strike temp and the element ramped itself up with ease and turned itself off at the set-point as expected.

I switch it over to Duty Control (manual mode) and had it roll to a boil. I turned down the % output to the element for a slow rolling boil and we ran into an issue that it wasn’t communicating the change in output. BrunDog had a patch over to me the next day which fixed that issue. It just shows how awesome his customer service has been throughout this process. Haven't had an issue with it since.

So far everything seems typical when it comes to electric brewing right? But what about AUTOMATION? That is why people are drawn to BruControl but all you’ve talked about is typical electric setup …. Ok ok on to that. After initial tests and my first brew went well BrunDog challenged me to teach myself scripting. That is what separates the Uniflex from its competitors is that its smart enough to take manual steps out of the process. Now I do not have automatic valves yet (wife would kill me if I spent more money on that right now) so baby steps. He sent me his script for his process that I was able to review. Between that and the BruControl manual I was able to write scripts for Striking, Mashing, and Boiling within a day. As a disclaimer, I AM NOT A PROGRAMMER. I am comfortable with computers, but I learn by seeing what others do and tweak things to fit what I am trying to do. I think that is like most people that brew. We pick up bits and pieces from others and make them our own. This process was really easy once you get the hang of it, not to mention how fun it is to get it right.

So here comes my first water test with the new scripts. What I wanted to see was if what I had typed in actually worked in real life. I tried to automate every step I could that I did manually the first time I brewed. Scripting basically reads out as follows….

Start Script, Turn on element, set PID to 162, turn pump 1 on (water recirc for HLT), once that temp is hit alert me, Turn PID down to mash temp, turn pump off. Now I dough in and move my tubes around.

So far so good. Once button press got me from cold hose water to strike temp.

Start Script, PID to mash temp, turn pump 1 & 2 on (water recirc and HERMS coil), start timer for 1 hour, after 1 hour turn on alarm and turn PID to mashout (170). Turn both pumps off.

Now I manually move hoses to drain my Mash Tun to Boil Kettle and sparge in from my HLT that is warming up to 170 while I do this. So far through Mash with two button clicks. Here I manually turn pumps on to drain/sparge but I could automate this pretty easily just haven’t done it yet.

From there I manually chill the wort and put it in the fermentation chamber.


There are a few more steps I can work out to save me a few buttons clicks but I am honestly amazed how well it works. Compared to my first brew where I was adjusting temps on the digital platform for every step and messing with the pump buttons. I now have scripts that do that all for me. I look forward to having more and more consistent brew days.

I know this was already a small book but let me know if you have any other questions. I have had so much help at this point it would be wrong not to offer to help as well!

Huge thanks again to BrunDog!

@BrunDog is changing the game in this department. Great to read an independent thread with such high regards for the new system. I’ve never done small circuitry before, so it was a daunting task to build my own setup.
OP

Tim H said:
@BrunDog is changing the game in this department. Great to read an independent thread with such high regards for the new system. I’ve never done small circuitry before, so it was a daunting task to build my own setup.
Click to expand...

That's exactly where I was at. As much as I wanted to get into automation, the barrier of entry with skills needed to build a controller was too high for me. This really opens up more opportunity.
E

Hey all, curious about the programming used..is that a ladder logic program similar to plc/pac control? I'd love to build one of these myself and am taking plc programming classes now. I was wondering if there is another type of programming used for this or if I should attempt to use ladder. The system looks sweet btw, a bit envious here..

This is definitely on my "someday" list. As an active homebrewer and a professional PLC/SCADA application developer it seems that it only a matter of time.

@RonBurgundy10 can give you his specific experiences since this is his thread, but BruControl doesn't use ladder logic (no offense to PLC's but in my opinion, that's an outdated programming technology). BruControl doesn't require programming, though it uses a "script" language to automate any of the brewery processes you like. You wire in a device, create the control ("Device Element") in software, then control it manually as you like. If you want its changes to be made automatically in response to other events (timers, temperatures, etc.), then you can layer the script on top.
OP

erikhild59 said:
Hey all, curious about the programming used..is that a ladder logic program similar to plc/pac control? I'd love to build one of these myself and am taking plc programming classes now. I was wondering if there is another type of programming used for this or if I should attempt to use ladder. The system looks sweet btw, a bit envious here..
Click to expand...

Programming is next to nothing. Upon arrival all I needed to do was install the included config file which set up ports for all the devices I was using. I just needed to plug each in and do a test so I could label which probe was responding to line them up correctly. Same with the elements. Everything you see on my screen was already programmed upon installation (besides the mash tun temp probe which I added later) 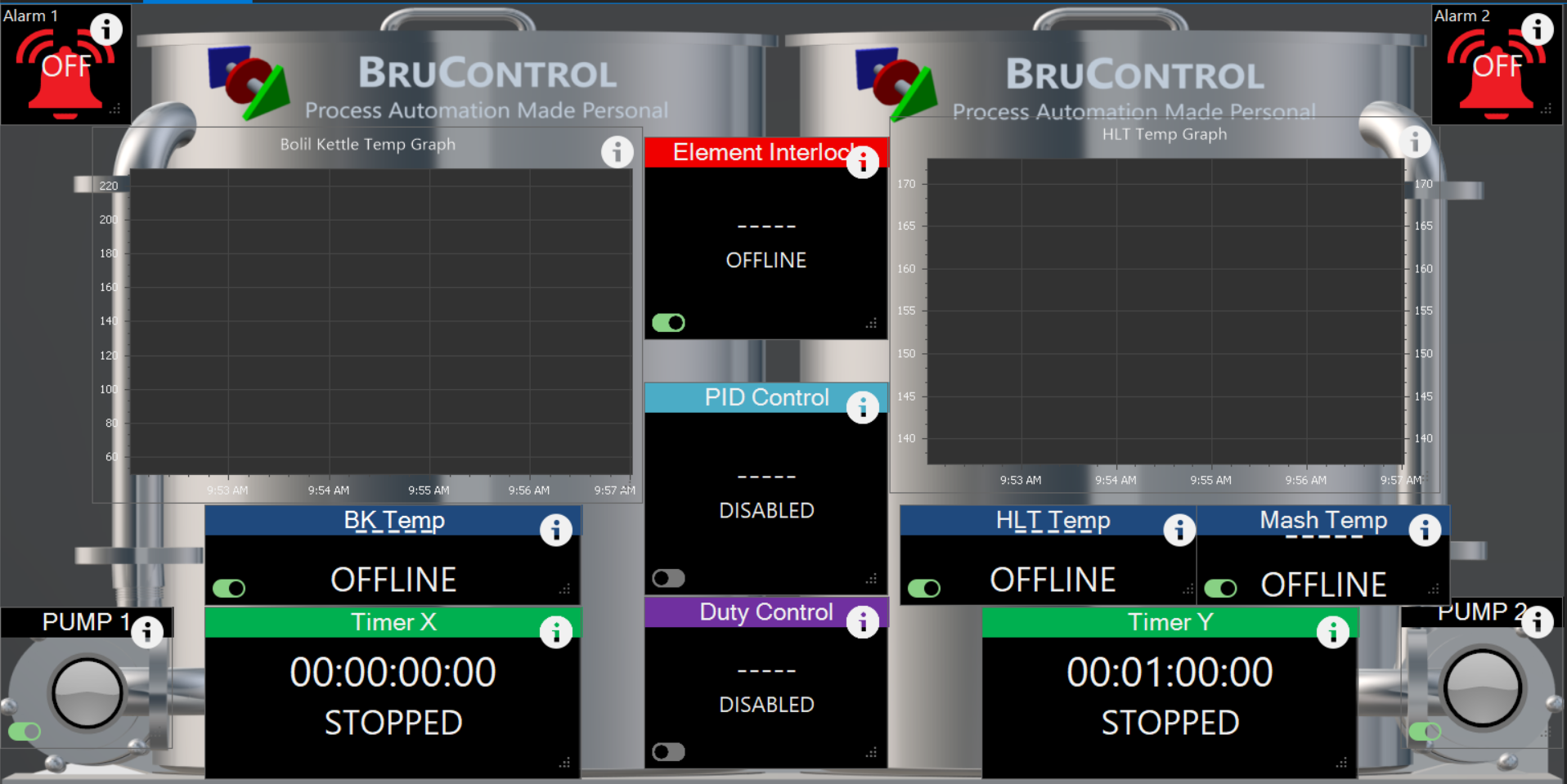 When it comes to the script it looks like this below. Again I have no programming experience but I was able to see other scripts and make my own that read out similarly. This is my boil script which just turns the coil to 100% output until 204 degrees, then turns it down to 75% until 206 then down to 50%. This gets me to a nice easy boil without running to fast and getting a boil over. After it goes to 50% it starts my timer and when that hits an hour it turns off the element and pings the alarm to let me know in case I wasn't staring at it.

I had my first brew with three probes (instead of 2) this weekend. I wanted a probe directly on the wort that was heading into my mash tun. I am new to HERMS so I wanted to get an exact on the difference between the HLT water temp and the actual wort passing through the coil and going back on top of the grain bed. I added a T fitting with a compression fitting on the side. The probe goes in the side while the wort comes in from the top. 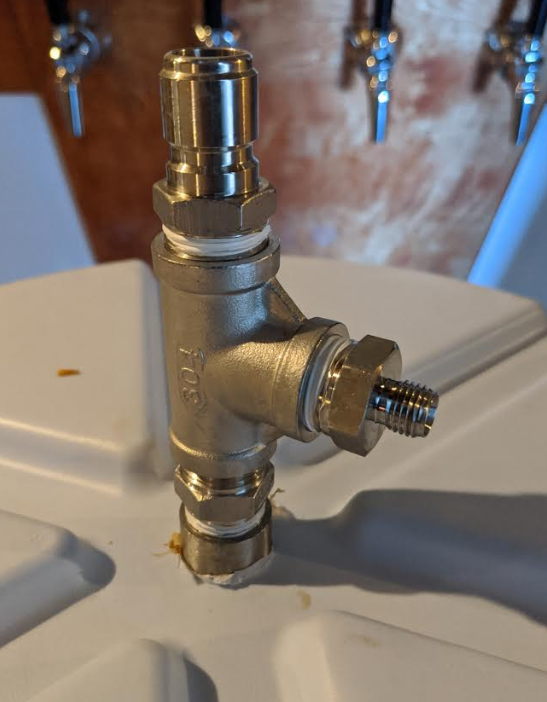 You can see a big spike swing on the graph below. That is from me stopping the pump to stir the bed in. I was happy to find out that it stayed almost exactly 2 degrees different. I had it set at 156 at first but once everything was warmed up and level I ended up turning the HLT down to 154 to keep the mash between 152-152.5 for the remaining 45 minutes. Pretty awesome! 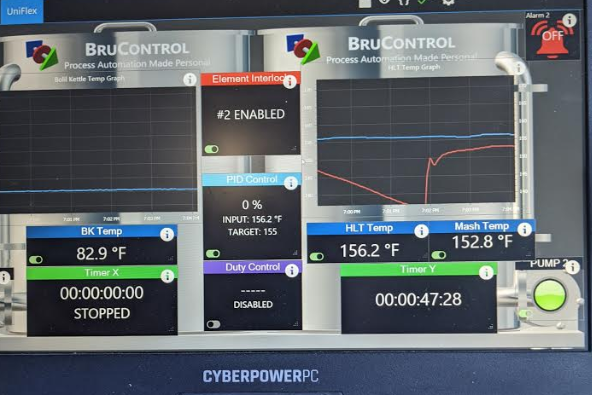 BrunDog said:
@RonBurgundy10 can give you his specific experiences since this is his thread, but BruControl doesn't use ladder logic (no offense to PLC's but in my opinion, that's an outdated programming technology). BruControl doesn't require programming, though it uses a "script" language to automate any of the brewery processes you like. You wire in a device, create the control ("Device Element") in software, then control it manually as you like. If you want its changes to be made automatically in response to other events (timers, temperatures, etc.), then you can layer the script on top.
Click to expand...

Definitely overkill, I just happen to have a spare PLC lying around and access to HMI software so it wouldn't cost anything. Ladder is definitely dated, and more importantly, a PLC is way overkill for a home-based system. This looks like a great solution for automation, and especially for anyone who doesn't have a programming background and have to build something totally custom.
OP

Did my first step mash this weekend. Added the steps into the script to have them automatically ramp up. Set the temp I wanted +2 degrees to account for the difference in HLT water temp and the wort flowing back into the Mash Tun. It follows the timer to ramp up. Took about 5-8 minutes to ramp up from one step to the next.

Went on smoothly from start to finish! 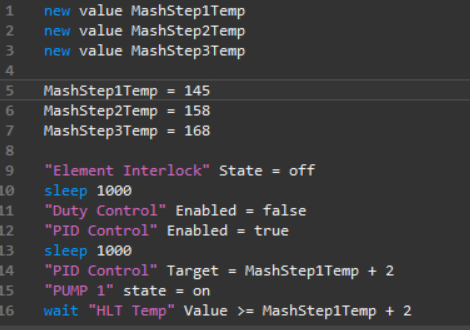 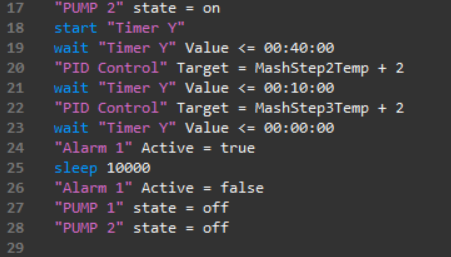