Like most beers with an ingredient other than hops, malt, water or yeast, coconut beers stir up a lot of emotion in the beer enthusiast’s talking circles. Coconut may have more of a reason for this than most other flavor enhancers and that’s because the oils in coconut can quickly ruin any head retention you’ve fought so hard to build into your beer. But, if done well, you can find a balance between stable foam on your brew and great coconut flavor. 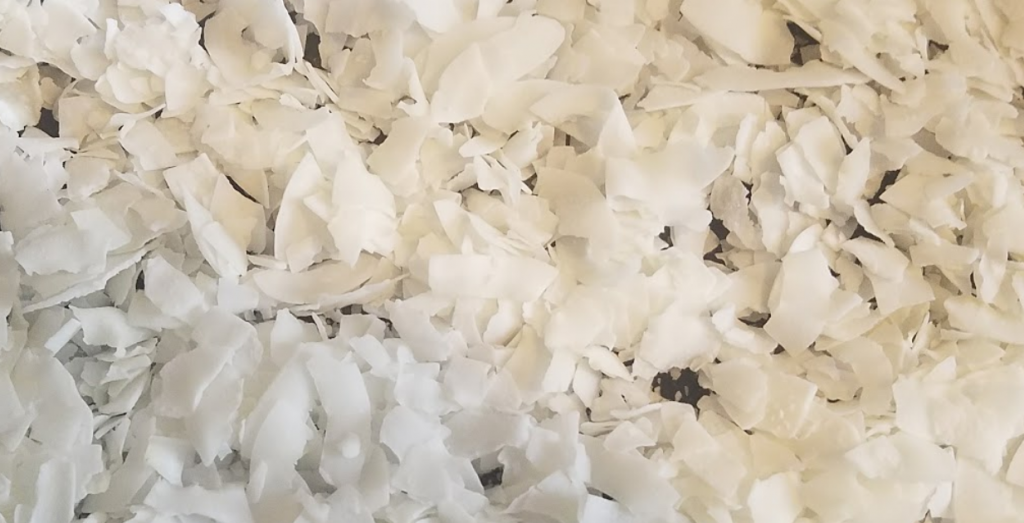 The Different Ways To Get Coconut Into Your Beer

Coconut has seen a rise in popularity over the past few years and it seems there is no end to how many ways you can find it in stores. However, the three most common forms of coconut you’ve probably seen around that are good for adding flavor to your beer are chips, extract and milk.
While I personally haven't tried adding coconut milk to my own homebrews, I’ve tasted them and have seen people speak their praises in their own recipes. I’ve enjoyed the flavor but we use coconut milk in a lot of recipes at home, and I find it hard to put the same base for our curry soups into my beers. For me, it just doesn’t “sound” appealing, even though I know it can work. After writing this article, that is probably my next stop.
The next area is coconut extract. Some folks prefer to use this rather than coconut chips in their beer because it can be much easier than working with chips. You can buy the extract pre-made or it is fairly easy to make yourself a day or two ahead of your brewing session. Basically, you roast the chips, sweetened is usually preferred for this method, then stew them down in some boiling water and filter the chips out to get your extract. Pop it in the fridge and add to your brew during the boil or secondary. You can also create an extract by soaking chips in vodka or grain. If you want to take it a step further, you can try some fat washing. This is where you take your first round extract, freeze the fat out of it and then harvest your extract sans fatty-fat-fat-pants.
The area I’ll be talking most about in this article is my preferred method, unsweetened coconut chips. The reason I prefer to use chips is because I feel it creates the most natural “coconutty” flavor you can get. You can buy pre-chipped coconut in most grocery stores these days but be sure to check the label for the expiration date. I’ve seen several bags at different stores that were well past the date, bought and used the outdated chips, and have been disappointed with the flavor in the beer. So be on your guard! Also check for preservatives, which could inhibit fermentation later on.
I prefer to store my chips in the fridge until use. You could also go the Castaway route and cut and chip fresh coconut but I don’t find that you get enough of a flavor difference to justify the level of effort. But I’ve been called wrong before. And I have ignored those statements before. And I will continue to do so!

Like I said, my preference is to use unsweetened chips. Again, I find you get a more subtle and natural flavor with the unsweetened variety. I also prefer a beer a bit on the dry side which typically leads to subtle flavors having an easier time standing out. Adding sweetened chips after primary and not giving a proper secondary before bottling or kegging leads to more residual sugar in your beer and sweetens it. If you don’t mind a bit sweeter beer or waiting longer to put your beer on tap, this may be the route you want to take.


Roasting vs Not Roasting Coconut Chips

There are several reasons to roast or not to roast. The main things you want to consider are: 1. What type of beer profile are you looking for, and 2. How much head retention are you trying to save?
From a flavor profile perspective you can imagine a nice toasted coconut works well with a malt forward beer, where a hoppy or lighter style beer might very well be complimented by and unroasted sweet coconut flavor. Roasting the coconut will help to enhance the balance of those toasty malts whereas leaving it in its raw state allows for the flavors and natural sugars to be more present.
Be aware, however, a non-roasted coconut is going to also retain more coconut oil. The challenge there lies in how much total oil are you putting in your beer. Oil destroys head retention. It does this by creating an oil slick on the top of your beer and inhibiting the formation of bubbles.
Realistically even if it’s raw and you don’t add too much you should be fine with head retention. But, if you’re into little to no foam and strong natural coconut profile go for not roasting it. You’ll probably be pleased. However, too much oil in a beer can make it go rancid quickly. So drink up!


How To Roast Your Coconut

My preference with roasting coconut is low and slow. You’d be surprised by how quickly it can go from lightly toasted to crispy charred like that dude in Beetlejuice (don’t read this line 3 times) who couldn’t quit smoking. You normally don’t get a warning about the charring! So I like to set the oven to 200 and toast from anywhere to 20-30 minutes until I hit something that looks like the below picture. I’ve done it at 400 before and was able to get the same color in a much shorter window, but I’ve also been distracted by shiny objects and Val Kilmer tweets long enough that I end up with Beetlejuice guys on the pan (OK, seriously don’t read this out loud!). 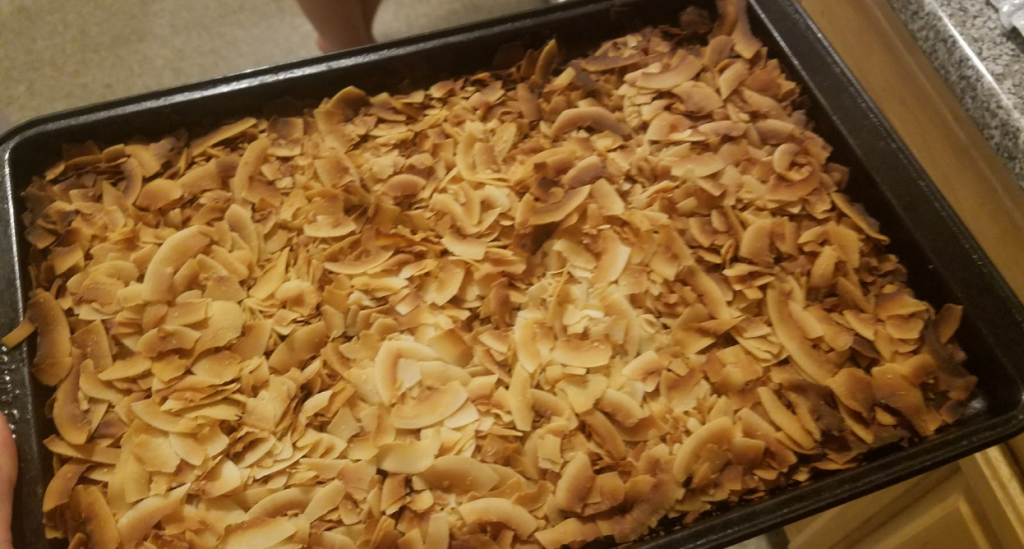 When Do You Add Coconut to Your Beer

I have tested this on a raspberry coconut porter in several different ways. They include
So now you know I like this recipe and have some time on my hands. But, I can say the one method that stood out the best, with the least effort used across the brew session is plain old secondary. But, you'll also see a ton of recipes out there where people do multiple additions. I’ve found keeping it simple works well. 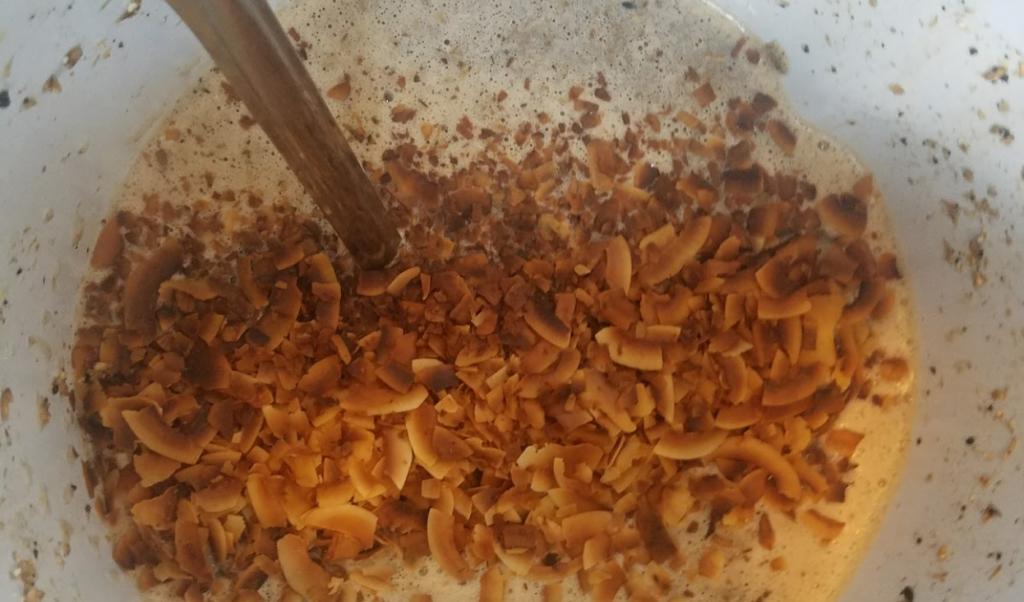 However, with that test I did use the same quantities properly proportioned across additions. So for a five gallon batch I find that 16 ozs of roasted/toasted? coconut works well to give the flavor I’m looking for. I leave it in the secondary for about a week until I rack it. But realistically, coconut is a flavor that requires some fine tuning based on the freshness, amount of roast and other ingredients in your beer but especially your personal taste preference. Coconut and coffee is a much different thing than coconut and raspberry. So have fun testing your coconut style! 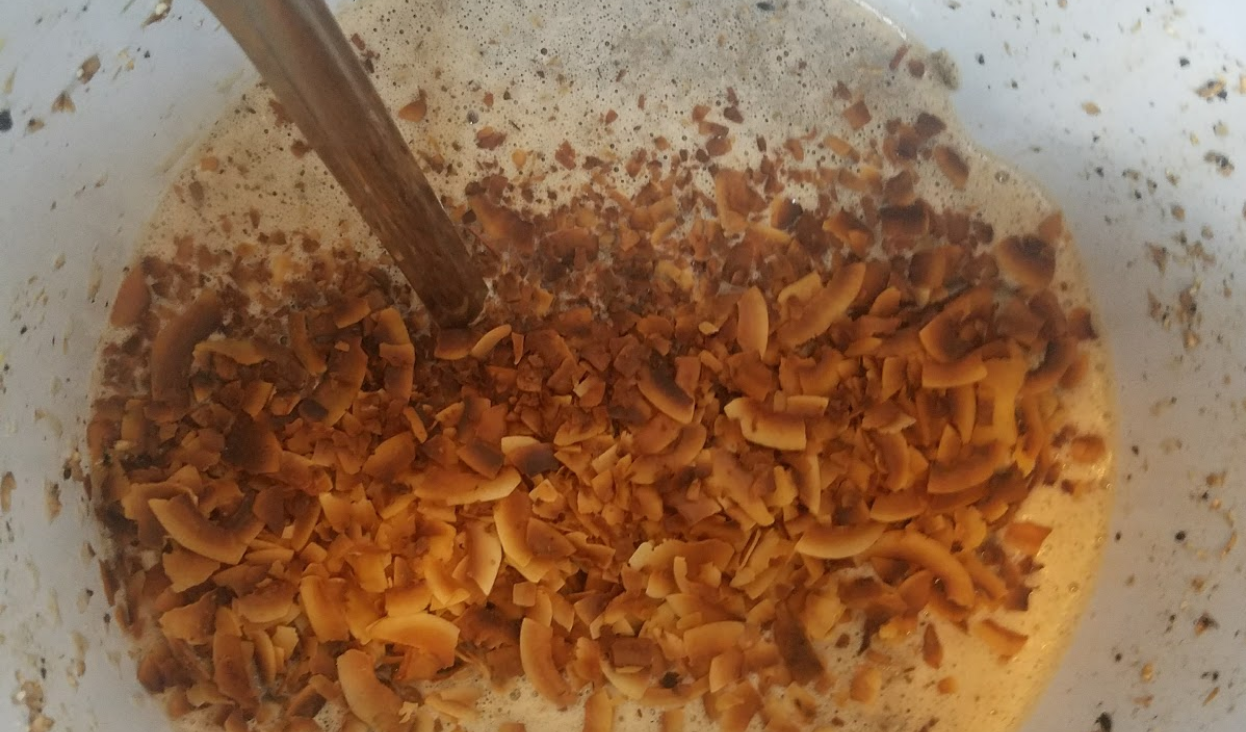