Sweet red peppers, or capsicums, have a lovely and unique mild spiciness that lifts any meal, so let’s put it in beer.
Firstly, it’s important to know that green peppers are actually immature, so they won’t have developed the full depth of flavor we want. Even though they’re usually a little cheaper, we don’t want the green ones today. 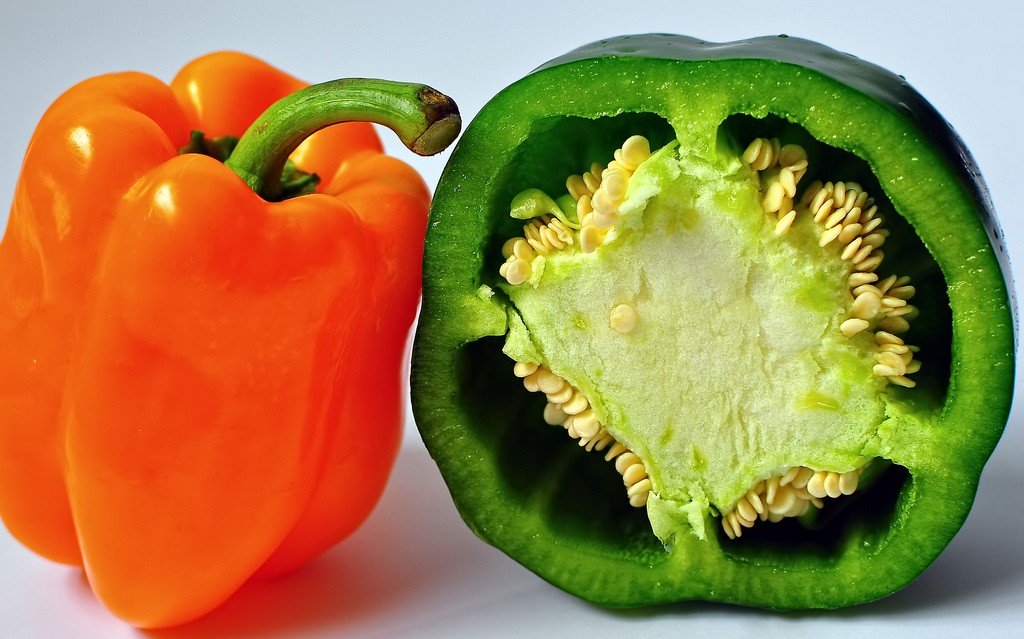 How much should we use? Luckily, the sweet, peppery flavor transfers quite readily, so there’s no need to go too crazy. It’s also possible to use too much, which will pump excessive bitterness to the beer (strange since they’re ‘sweet’ red peppers, but who are we to question the brewing gods?). Let’s hold back a little and try to only give the finished brew a noticeable hint of the flavor to complement the malt. About one and a half peppers per gallon (or a single pepper for two and a half liters) will get the job done. Of course, some peppers are larger than others, so in a five-gallon batch (around twenty liters) you’ll need to purchase around three and a half pounds (one and a half kilograms) of sweet red peppers. Once you remove the seeded core, you’ll be left with a little over two pounds (one kilo) of the red flesh.

We initially want to freeze these lovely hollow veggies (or fruits… whatever you feel like calling them), so cut them into flat cheeks and get them into the freezer overnight. This will break down the cell walls and allow the flavor and aroma to more easily diffuse into the liquid.

Because, as awesome brewers, we’re obsessed with sanitation, let’s cook the buggers before they go anywhere near our wort. You could spray the cheeks with a sanitizer (a sanitizer you’re certain will not burst into flame) and put them in the oven, but be careful not to overdo it. We want the microorganisms to perish; we don’t want any excessive burnt flavor. Alternatively, you can put the sweet red pepper cheeks into zip lock bags and boil them (effectively sous vide), but if you’re brewing a large batch you’re going to need a lot of big bags. If you do go down this path, make sure the bags you use are food grade quality and won’t melt when they hit the heat.
Because we’re also thorough, let’s put half of our prepped peppers into the mash and half as an addition to the boil for an hour. This way, we know we’re injecting the desired flavor into every (early) part of the brewing process.
The most noticeable presence of the sweet red pepper in the finished beer will be the aroma, so plan to add your favorite hop or flavor addition to a secondary fermenter to really round out the overall profile of the finished beer.
The smell of sweet red peppers is also quite lovely while the beer is fermenting, so for once, the other people in your house might enjoy the smell of your brewing obsession… but don’t count on it, the pong of hops will only ever be loved by brewers.
Of course, you could add sweet red peppers to any style of beer, but you’ll find that the flavor is best in a dark brew. As you might have guessed, this is because the bold taste of the beer won’t be overpowered by the addition. The sweet red pepper taste also tends to hit the palate at the end of the tasting, so you’ll still be able to enjoy the complete flavor of the beer.
Here’s a recipe for a lovely dark pils with sweet red pepper and you’ll find that it’s particularly delicious with a big scoop of vanilla ice cream floating on the top. The yeast choice here (Saflager W-34/70) is a robust little fella that will promote the final fruity flavor. I fermented mine at 60 degrees Fahrenheit (15 degrees Celsius), which is cheating the ‘pils’ style, but a little variation every once in awhile is a good thing. When drawing up your own recipe, remember that the sweet red peppers will add some bitterness, so throw in an extra handful of cara-malt and consider holding back on the hops until you can taste a little of the fermented product. 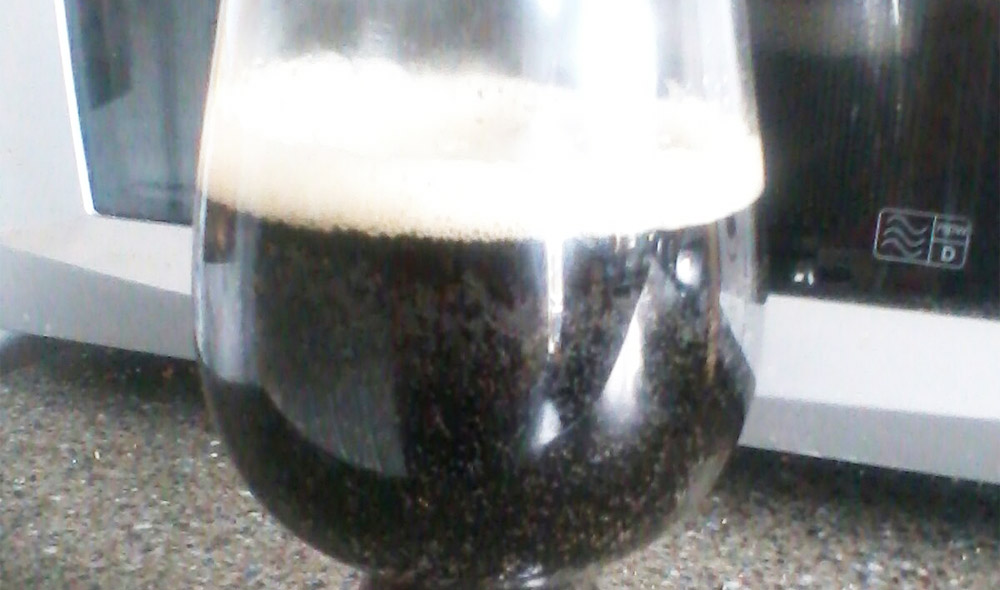 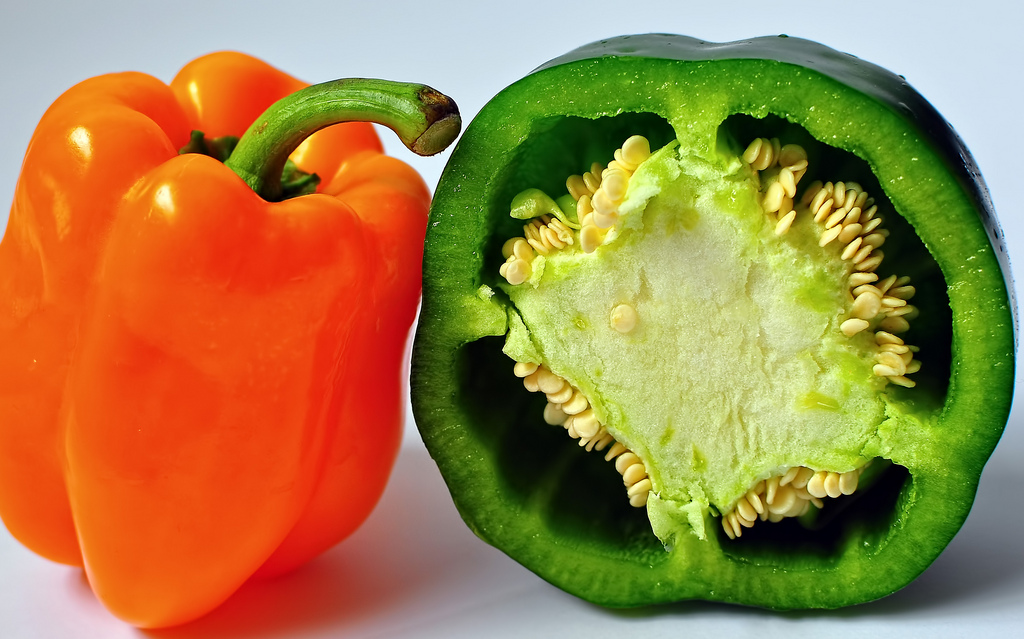 How long are you boiling the peppers?
For one hour, which seems like a very long time, but it worked well.
Sounds tasty. Will have to try.
Why do you cook the peppers? Boil will/should kill anything to worry about.
Interesting! Is sanitizing the peppers really necessary though since they will be getting boiled?
It's not crucial to sanitise the peppers, but it's simple and it doesn't take too long. It's often better to be thorough, then if there's an issue later on in the process you can be one-hundred percent certain that the peppers weren't the cause.
agreed, no reason to sanitize the peppers since they are boiled, but placing them in the over could help provide the unique flavor.
Look's and sound's really good. since you are boiling them I would not really worry about and "micro organisms". it would also be cool to fire roast them rather than freeze them, add a little smokiness to your beer.
You don't need to sanitise the peppers, but I like to make sure that they're not ferrying any little stow-aways into the wort to begin with. It is quite tasty, it would be interesting to add a good flavour that hits the pallet at the start of the taste. Let me know if anyone finds a good match!
Love peppers in my beer. I've only done roasted Chile's or hot peppers, though. May have to give these a try.
Good article
raiderrob67 I like the idea of roasting the peppers. Never thought of using red and yellow peppers but will try this in a beer. Now I want to decide which of my beer styles I'll use it in??
Would it be possible to use just the pith and seeds from the bell pepper? It would be interesting if you could find a use for those. Also, I suspect the sugars from the sweet pepper would ferment.
I've been adding almost nearly imperceptible amounts of chili flake to my brews to improve blood flow to the taste buds, like a half teaspoon to three gallon batch.
Clever idea with the small amount of chilli. Does it work well?
I expect you could use the pith and seeds of the peppers, but it wouldn't taste the same. The flavour we use in cooking comes from the flesh, so maybe the pith and seeds taste totally different.
You must log in or register to reply here.
Share:
Facebook Twitter Reddit Pinterest Tumblr WhatsApp Email Link

C
Using a Microscope with Homebrewing: A Primer

Oct 5, 2017
brewstergalVT
B
M
Myths and Surprises in Homebrewing