When I first came across a Keg King product, it was a wort pump selling for 25-50% less than the mainstay pumps of the homebrewing world. I figured maybe it was just a one-off no-name product, but I gave it a try. The pump itself was great, and was a solid performer. When inquiring about their pump relative to their competition, Keg King talked about high temperature durability testing that outperformed its competition as well as a higher water protection IP rating (industry standard as a measure for how well electrical products keep stuff out of their insides- water, dust, etc.). Hearing them explain their pump with these sort of details, I realized there was more to it than just being the lowest-cost producer.
Kee Doery says he doesn’t really have an official title, but figures the title of General Manager for Keg King is probably the most accurate. He likes to spend as much time as possible in product design and development, but says in reality he spends a lot of his time invoicing, dealing with staffing issues, and also general customer service. Keg King is a subsidiary of its parent company, MCH Australia, and Keg King makes a broad line-up of homebrewing products.


Keg King: Getting Off the Ground 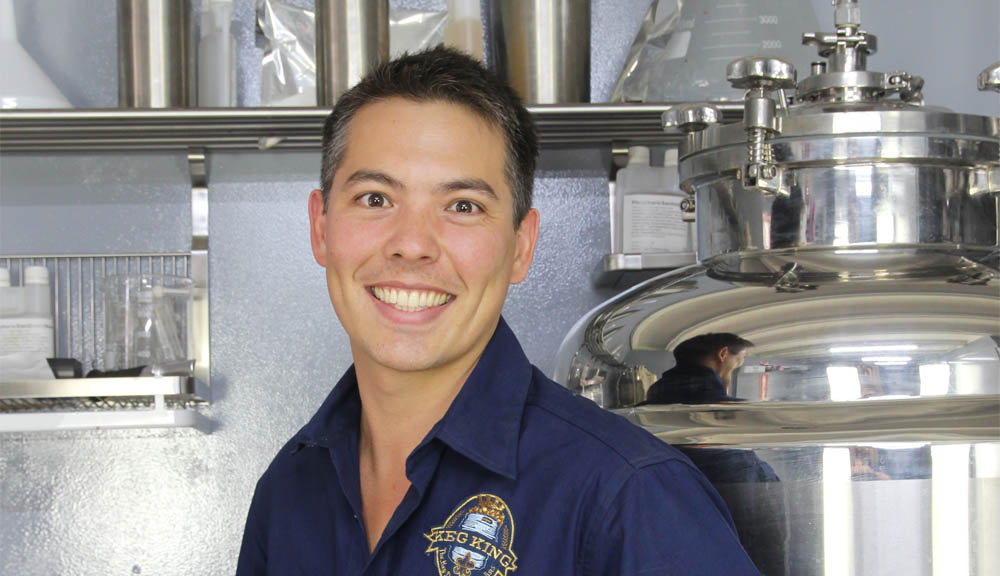 Kee had a common story of how he got into homebrewing. He started homebrewing in 1999 as a college student. He admits that it was terrible beer, but it was mainly for economic reasons, as the alcohol tax in Australia is quite high. Then as we all do that stick with the hobby, it became about making beer that he wanted to drink and couldn’t find on the shelves.
In 2006, he started looking into kegging. At that time, kegging wasn’t big in the homebrew world in Australia, and homebrew shops didn’t carry much kegging equipment in their line-ups. For that reason he started Keg King as a side business within MCH and started bringing in generic keg dispensing gear from China to sell in Australia. Kee explains, “It didn’t talk long to realize that a lot of the generic hardware from China was really not of a high enough quality and he said frankly didn’t work that well. So we started to design and manufacture some of our own products. MCH Australia already had staff in China and also agreements with other textile manufacturers, metal fabricators and plastic injection molding factories, so it was a small step to start designing and manufacturing our own home brewing products.” Over the next 10 years the business grew exponentially and Kee says that through great luck, they found they had started Keg King right at the start of a huge craft brewing growth cycle.
Keg King has 4 full time engineers working in Australia plus 3 programmers they have contracted in Australia. Kee says they have spent more than US$2 million in R&D and tooling in the past 18 months for their various product lines. In China they have 1 full time engineer and several other that they hire on a contractual basis.
As an example of how they’re able to make great homebrew products at a low cost, you can look at their Mark II wort pump. They started with an already-manufactured pump in order to economize on the electric motor winding side of the design. But the glass reinforced Polypropylene (PP) of the pump head did not have the long-term durability at high temperatures to make it a sturdy homebrewing product. As Kee explains, “When plastic products are injection molded they contain some inherent stresses. The product may appear to be stable at room temperature but with heat the products can warp and change shape. This is definitely the case with PP at temperatures around 100C/212F and when we tested the pumps we found that the ones with PP heads had issues with warping at elevated temperatures.” Their solution was to source their own Polyphenylene Sulfide (PPS) raw material to use in the pump head. The PPS material is 10x the price of PP, but by maximizing the economy of scale on the base pump electricals and then just putting in upgrades to the part that was important for homebrew use, they ended up with a high quality homebrew-specific product that also saves the customer money. 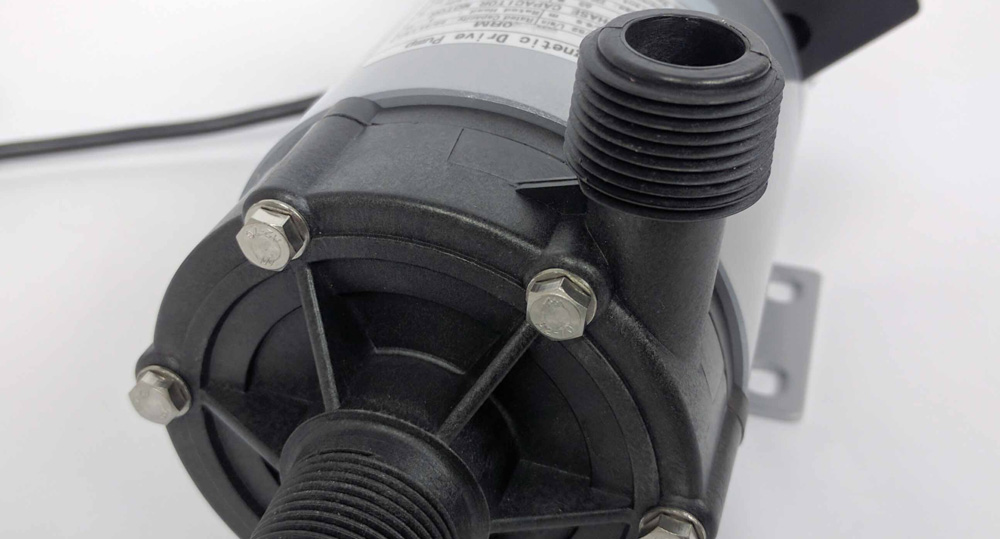 Here’s how Kee describes their approach to product design, “If we are entering into a new area, we will firstly look at all the existing products that are available. There is no reason to re-invent the wheel, and if we can simply learn from what other competitors are doing this is the first step. Then once we start to get some experience in the area we normally will then look at ways we can improve the product further. I guess you would call this approach ‘emulate, then innovate’. ”
They followed this approach with their Intertap faucets. They used the Perlick taps for years and sold many of them through their kegging supply side of the business in Australia. Working with the taps so much, they found they could get some issues with the o-ring sealing after some time of use. So they dug into the design to understand the cause of the issues, then came up with a modified design that maintained all the benefits of the forward sealing tap design concept, but addressed the fundamental issue found with the o-rings over time. The mindset again was one of focusing on targeted improvements to provide improvement in the most notable area for homebrewers, but at an efficient price. 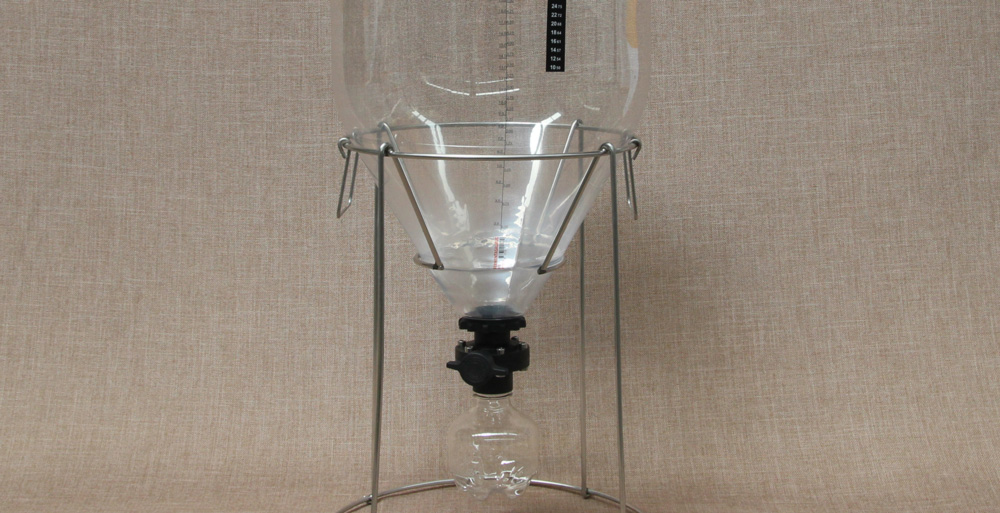 A final example of their design mindset can be found in their Fermentasaurus. It’s a PET conical fermenter. Kee says, “Had we set out just to make a plastic conical fermenter this would have been relatively easy but when you want to make a reusable pressure vessel out of plastic the engineering constraints are significantly more demanding. As the diameter of the vessel increases the hoop stress in the container increase at a squared ratio so it becomes increasingly more difficult to find a PET resin to meet these demanding requirements especially for a container with a relatively large diameter like ours.” So their materials team set out on global research to find the right material, finding the only place that had the right raw material in Germany. The project then required specialized blow-molding equipment, so they had that built and installed in their facility in Melbourne. Now exporting these fermenters outside of Australia, the true global nature of the product is being realized. And with their focus on cost efficiency, they feel they are achieving their goal of making these products available to as many homebrewers as possible.
With Keg King now the major business of MCH Australia, Kee feels they have the momentum to continue to drive their improvement and innovation mindset in multiple directions of homebrewing. He sums it up saying, “To be in a business that is my hobby is simply awesome and I have never looked back from starting the Keg King business.”
To see the full Keg King product line-up, you can peruse their Australian website, www.KegKing.com.au.

Love the article, but wanted to note that the hoop stress equation is linear with the diameter.
Good catch. You are correct. The physics phenomena Kee was trying to describe was that at a given pressure, the size of the vessel affects the stress in its walls experience. So even if you're fermenting at a constant pressure, the bigger the diameter of your fermenter, the stresses go up PROPORTIONALLY. When they took it to the next level and wanted to carbonate in the fermenter, they either needed to make it smaller or find a material that could handle the stress. So they set off on their global search for a clear material that could handle the stress.
But again, good catch!
intertap was a part of his company
This article would come out after I paid $140 for a Chugger pump......ugh
The intertap faucets are great, and give Perlick a HUUUUge run for the money.
Like other Chinese made products, the Chinese knocked off the design and were selling imitations via Alliexpress,.
In any event, the shuttle design replacing the Perlick "pearl" design seems to work better, with less O-ring compression and the resulting o-ring failure.
Glad to see an upstart giving the big boys heartburn!
Nothing but good stuff from kee and the team at keg king.
Will we see a "williams warne brew system" from keg king? Maybe something alittle more advanced allowing all grain brewing.
Actually they are about to start selling their Robobrew unit in the US. It's an all grain electric unit with a re-circulating pump, similar to Braumeister and Grainfather. They'll be importing that through MoreBeer. At the price point they're introducing it, I'd be scared off if I didn't know about their thorough approach to designing and improving stuff for the homebrew market!
It's great to see passionate engineers like Kee working in areas most of us call a hobby. Thank you. When you can find a video of a product being tested online you're assured there is nothing to hide.
I recently purchased an Intertap flow control faucet based on a video. One day I saw this new faucet behind the glass case of my LHBS. The next time I was there they were sold out. Im guessing other home brewers saw that video before me. I'm impressed. The Intertap pours just as nice As its competition but the interchangeable heads is a game changer. I can't wait to see how it pours a beer on nitro. Cheers
An Australian chimes in here. Great article .....Keg King have, over the years moved quickly from being just another supplier of off the shelf cheap product to actively sourcing better product to creating their own. A terrific story that has not only benefited home-brewers in Australia but now across the world.
You must log in or register to reply here.
Share:
Facebook Twitter Reddit Pinterest Tumblr WhatsApp Email Link