Brewing by the Numbers | The Law of Averages Part 1

The technical side of brewing has always been the most interesting to me. I enjoy the process (and the drinking), but the science behind it has always taken the limelight. I was reading the recipe for Biermuncher's Aberdeen Brown Ale (https://www.homebrewtalk.com/f67/aberdeen-brown-ale-newcastle-clone-ag-36912/) and he mentioned that Newcastle blends two different batches. More importantly, he mentioned how he opted to blend two recipes instead of making two batches. That really got my mind churning. Could that be applied elsewhere in brewing?
So, I decided to try a little experiment called "The Law of Averages." I took three different pale ale recipes from three respected and well-known brewers on HBT: Biermuncher, Yooper and EdWort. Here are the links:
Biermuncher's Six Shooter Pale Ale:
https://www.homebrewtalk.com/f66/six-shooter-pale-ale-ag-4-5-late-addition-only-56950/
Yooper's House Pale Ale:
https://www.homebrewtalk.com/f66/da-yoopers-house-pale-ale-100304/
EdWort's Haus Pale Ale:
https://www.homebrewtalk.com/f66/bee-cave-brewery-haus-pale-ale-31793/
The experiment consisted of merging the three recipes and seeing what the end product would be. This is entirely experimental and I do not mean to infer that the final product will be better than the base recipes or that any of them are better than the others. This is pure curiosity...to the graphs!
The first graph shows the percentages of the three recipes: base vs. caramel. EdWort's Haus Pale Ale had the highest base:caramel ratio at 95:5. Biermuncher's Six Shooter had the lowest at 88:12. If you follow the numbers over to the last column, you'll see the "Ideal Grain Bill" column. The percentages in that column are averages of the other three recipes, which are 91.33% base malt and 8.68% caramel malt. Simple enough?
The second graph breaks it down even further. It breaks the base malt down into specifics. Yooper's House Pale Ale had the most even distribution across base malts with 50, 30 and 20% of the base malt being two-row, Vienna and Munich, respectively. (I also noticed the top row in that graph didn't format the numbers as percentages). EdWort's Pale Ale had the simplest breakdown with 80 and 20% of the base being two-row and Vienna, respectively. So, the averages of base malts leads to an ideal mix of 69.3, 20.3 and 10.3% of the base malt being two-row, Vienna and Munich, respectively.
Of course, it wouldn't be in-depth enough if I didn't delve into the caramel malt with the same veracity. The third chart breaks the crystal down into two categories: light and medium. This category was the most diverse with Biermuncher's Pale Ale being an 80/20 mix, Yooper's half and half, and EdWort's being completely light crystal. I know everyone has their interpretations of crystal/caramel malt, but I use 0-40L as light, 40-80L as medium, and 80-120L as dark. The averages led to a 77/23 (light/medium) mix. I am choosing to go middle of the road on both: Crystal 20 for the light and Crystal 60 for the medium.
Last, I analyzed the hop schedules. This last bit fascinated me because of the difference in schedules, which I thought would make for an interesting mix. Biermuncher used all late hop additions, Yooper used mostly late additions, and EdWort used an even spread. If a hop addition fell on the border of categories (0-15,15-30,etc.), I split the addition in half to account for both categories. For example, if it called for a 1 ounce addition at 15 minutes, I added 1/2 ounce to the 0-15 category and the other half to the 15-30 category. The averages led to roughly 50% of the hops for bittering and flavor, and the last half for aroma.
There were other calculations that I didn't make charts for because it wouldn't make any sense. Here were the others and how they contribute to the recipe I will be using.
Pounds of Grain Per Gallon: Biermuncher used 20.5lbs of grain for a 11.5 gallon batch. 20.5 divided by 11.5 gives roughly 1.78lbs of grain per gallon. I averaged all of the recipe lbs/gallons ratios for a final answer of 1.93lbs of grains per gallon.
Efficiency: Biermuncher's recipe was calculated at 72%, EdWort's at 75%, and Yooper's wasn't mentioned so I just went with 70%. Averaged out, it gives an average efficiency of 72%.
For the experiment, I'm going to make a one gallon batch with the following numbers derived from the averages of all three recipes:
OG: 1.051
FG: 1.014
IBU: 40.6
SRM: 7
Yeast: US-05
Grain Bill:
1.76lb Base
- 1.22lb 2-Row
- 0.36lb Vienna
- 0.18lb Munich
.17lb Caramel
- 0.13lb Crystal 20
- 0.04lb Crystal 60
Hop Schedule:
.55oz Cascade Hops
- .143oz at 60
- .044oz at 30
- .105oz at 15
- .264oz at 5
Part 2 of the article will be a review of the final product. Thanks for reading and feel free to apply this as you see fit. Cheers! 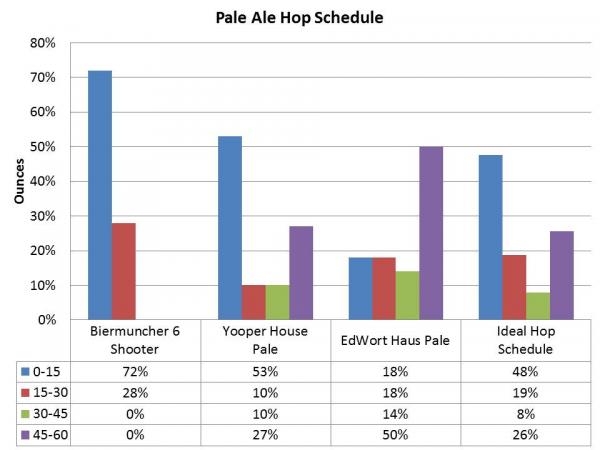 M
Brewing by the Numbers | The Law of Averages Part 1

J
Brewing on the Edge of the World: Canada's Arctic - Part I
2