Just got my first electric brewing set up. The Brewers edge mash and boil. Any suggestions/tips/tricks for this set up?
What to brew first?!

I see you got no love on this post...

You're 6 months in, how's it working out?

I just scored a good deal on the 35L Klarstein Maischfest which looks to be nearly identical to the Mash & Boil except for how the mash pipes sits up top for sparging... and it comes w/ a stainless immersion chiller... 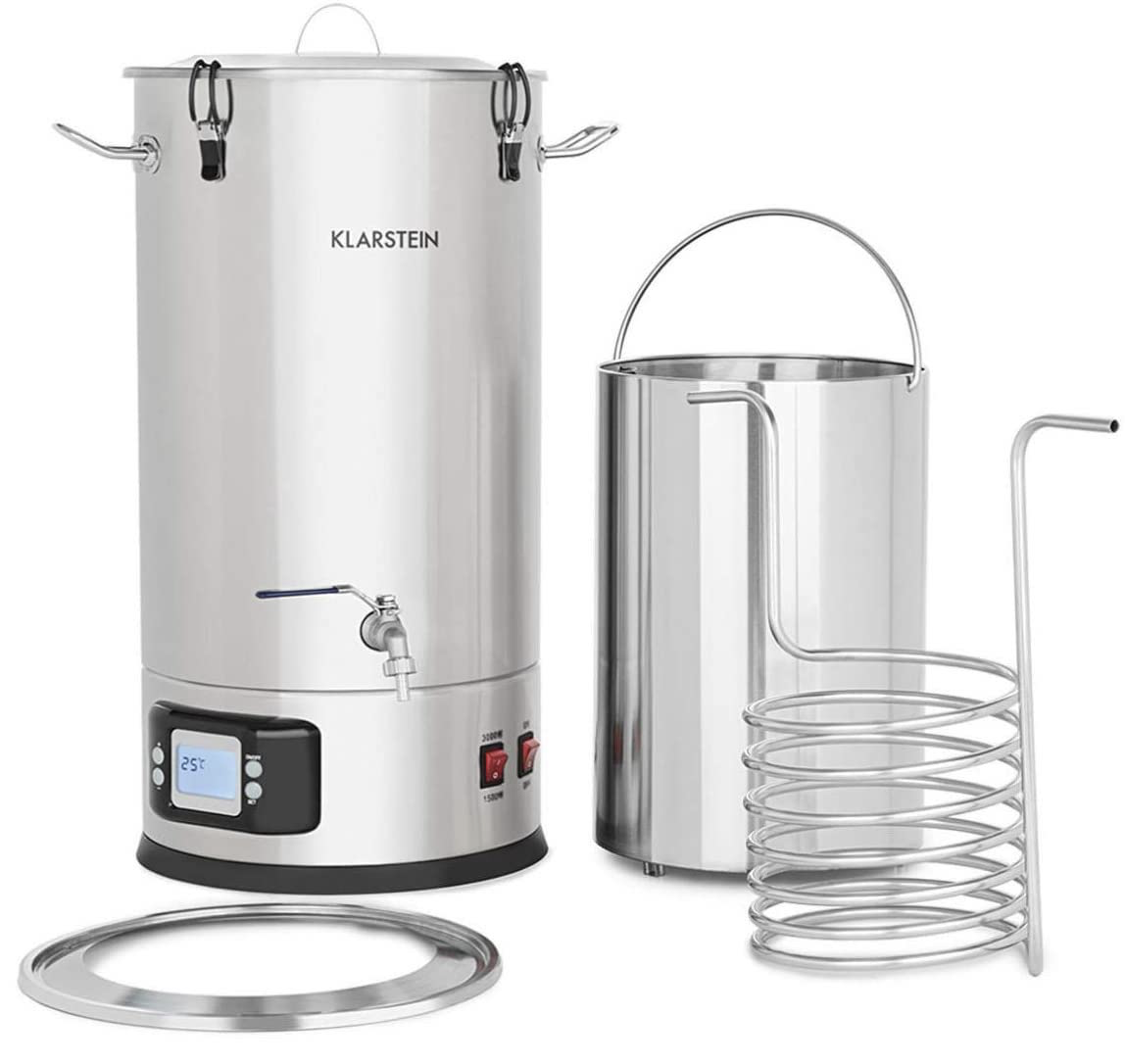 Just did my 1st brew with it yesterday. Brew day went a little longer compared to my typical stove-top BIAB due to learning new equipment.. (1st time with the maishfest, first time with a pump, first time with a chiller)... But all-in-all not too bad.. Did a variation of BierMuncher's Centennial Blonde (sub'd some grain for what I had on-hand and used sorachi ace instead of cascade for late additions)

I used a bag inside the malt pipe to minimize the chance of an E4. Re-circulated mash with my external pump, which seemed to hold temps pretty well.
I did have to pay attention to the recirc, as the pump moved the wort faster than it could flow back out the bottom of the malt pipe.

I used piece of 3/8" ID silicone tubing as a "dip tube" to minimize the kettle losses based on a suggestion I found online somewhere... The tubing just friction fits inside the bulkhead. Tests w/ water left only 1/2 quart. I left a little more behind on actual brew day to keep the wort clearer.

Almost had a boil over .1st time for that, too! Had the lid partially on to speed up coming to a boil. Seemed like there was plenty of room - I think I had a 7 gal pre-boil volume. D'oh! Fortunately I was standing right there and heard the strange sound before things went too sideways. A little wipey wipey along the outside and all was good.

Seemed like the boil was decent enough, though. I was worried about that. But I had a good rolling boil going. I did leave the lid half on after the hot break.

The included IC isn't really the right size. It eventually gets the job done, but it took waaaay too long... Like maybe 45 min.? The arms aren't quite long enough. The top coil wasn't submerged fully in the hot wort, and the total length also isn't quite enough. I did a recirc whirlpool while chilling. I usually do no-chill, so even the sub-par IC getting the wort down to 85-ish in such a relatively short time was a new experience as well.

I found clean up to be pretty easy. I added water and pumped out the trub then threw in a couple scoops of oxyclean and pumped it thru for a half-assed CIP, then hit it with a green nylon scrubby sponge. Almost as good as new.

Might've been 6 hours from start to finish. I didn't note the time, so I'm not sure.

There are a few threads here on HBT about the M&B... Plus some Reddit threads about it... And a some youtube videos.
There's also some UK homebrew threads about similar hardware which sounds like it might be the same kit just re-branded for a different market.

One dude here swapped out the controller for a grainfather controller.

Any tips for me, since you've had yours for half a year?

@jtratcliff I just got myself the Klarstein as well. I hadn't brewed (3v and BIAB) in about 5 years, so i decided that if I didn't brew twice this year, I'd sell all of my equipment. SO- what did I do? I bought MORE equipment - the Klarstein. I've only brewed with it once, and my efficiency and volume were way off- but that's on me- the old muscle memory just wasn't there and I tried a few things I've never done. Next brewday I am going back to basics so I can nail down the profile and other things about the equipment. I will say that the first brew with my Klarstein was my most relaxed brewday- very little running around. Since I have to haul my equipment from a shed to where I brew, having an all in one system rather than multipel, separate vessels and associated accessories truly makes my day easier.

My numbers on my 1st go round weren't too far off. But I did crush very fine, and mash pretty thin (about 6 gal strike and only about 1.5 gallon pour over sparge with ~12lbs of grain for a 6 gal batch). Only about 1/2 gallon per hour boil off, compared to my usual 1 gal/hr , but I expected that and planned accordingly. Oh, and I did recirculate during the mash with an external pump... So that probably helped, too.

I've only done the 1 batch so far, but I enjoyed using it. My biggest complaint is the ring for supporting the malt pipe during sparge/draining... You need a third hand to lift the pipe and put the ring in place... The mash and boil uses a different method for supporting the malt pipe that looks like it could be done one-handed: lift, twist, rest... 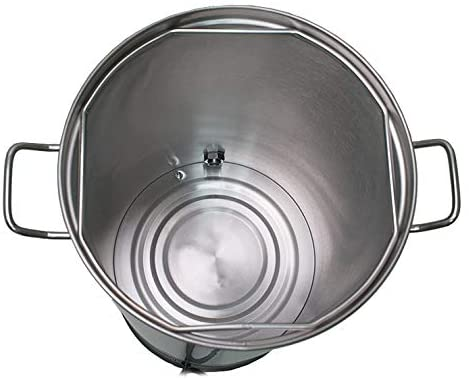 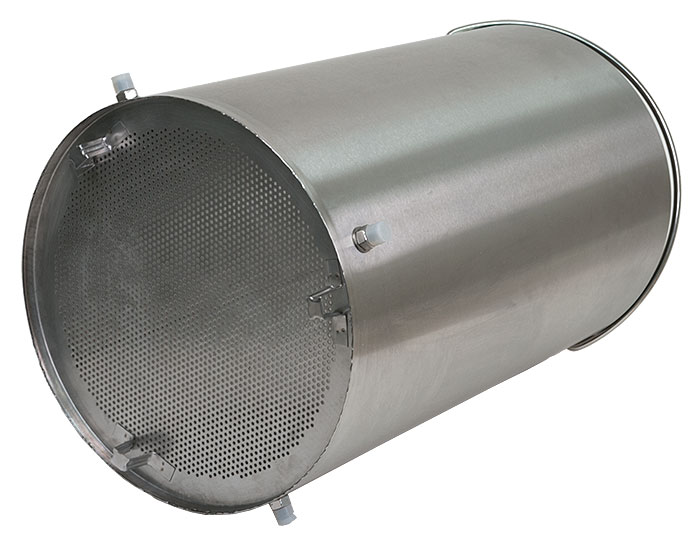 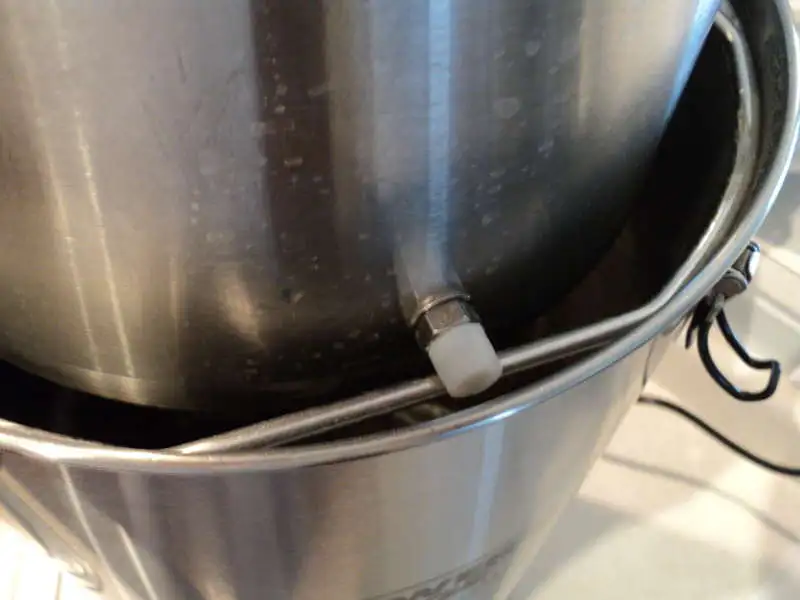 And the too-short IC... It's not really tall enough for the 35L version. The top of the last coil wasn't submerged. Probably fine for the smaller sizes, though. I have a counter flow chiller I made a few years ago but never used. I'll have to pull that puppy out and see how it goes with that.

I'm looking forward to finding the time for my next brew with it.

I keep looking for DIY mods but haven't found anything that I feel compelled to do, yet....

How about you? Any hints/tips/words of wisdom?
D

I've got about a dozen batches in with my Mash & Boil and like it a lot. The only issues I have are low efficiency (around 62%) and a general inability to get it dialed in with Beersmith. As far as efficiency goes, I have been reducing the size of my crush and started using a paint stirrer attached to a drill to ensure I get the mash good and stirred up. I read somewhere that sparge water temp doesn't matter so I haven't been heating the sparge but I think I'm going to get a heat stick or something to see if that could be the issue.

As far as Beersmith goes, no matter what variables I tweak something is always off. I brewed yesterday and ended up with way too much sparge water. Had to boil for over two hours to get the preboil volume I needed to hit my OG. I've decided to give up on the software--I bought the M&B to simplify my brewday but instead, I am spending a lot of time trying to get it accurately modeled in Beersmith. Going back to a notebook and manual calculations (or maybe a spreadsheet, haven't decided yet). I am not blaming the software--equipment profiles are complicated and I am sure the problem is my incompetency . I'm just sick of messing around with it.

Now, if only I could get a buyer for my old 3-tier gravity system...

I was doing 6 gal stovetop BIAB before I got the klarstein... I pretty much just kept my total water about the same except reduced by 1/2 gal since I'm only getting 1/2 gal/hr boil-off with the klarstein instead of 1 gal/hr w/ my 10g kettle... I had my BIAB set up dialed in pretty well in Brewtarget (an open source beersmith-like program). The klarstein is BIAB-like, so I just used my standard BIAB profile, less 1/2 gal strike.

I do crush pretty fine using a corona mill and did use my BIAB bag inside the malt pipe to reduce the chance of bits getting out and causing a problem with the thermal cut-off E4 error... I also mash pretty thin: ~2.0-2.25qt/lb... So about 6-7gal strike , and 1.5 gal sparge on a 12-13lb grain bill... I recirculated during the mash to help keep temperatures even which probably also help with conversion.

I did heat my sparge water, but temperature shouldn't really matter for extraction purposes. I did it mainly to not cool down the wort, since getting to a boil can take a bit of time. I normally dunk sparge in a separate kettle for my BIAB process, but for the klarstein, I ladled the sparge water over top (instead of pouring) to reduce channelling. I also squeezed the bag pretty good when I was done sparging. I think I got in low-to-mid 70s. I often hit upper 70s to low-to-mid 80s with my regular BIAB.
You must log in or register to reply here.
Share:
Facebook Twitter Reddit Pinterest Tumblr WhatsApp Email Link