I currently brew with three vessels and use propane outside. I would be looking to upgrade to electric to use in the new room.

It is a blank canvas, nothing in there, so I wanted to get feedback about how you would design it because space is tight. Is this realistically big enough for a brew area? Would love you guys to throw out ideas of what you would include if you were designing something.

Thanks for you help

Good to know man. Thoughts on what I should be including in the room when designing it? Am I missing anything major in my list above?

Your list pretty good already. If you can manage the floor drain piece you're already ahead of me

Realistically you'll want to consider dual/multi usage of large components (eg: work bench and bottling area could be combined, with storage underneath) and try to keep things to scale.

I'd draw everything up, probably numerous times, to see what will fit where, where you need aisle space, etc.
It will help inform what to build/buy in advance...

I've got a 6x12 space in which I have a sink, a large refrigerator, a small one (under the bench, a mash tun and boil kettle, a RIMS tube and a counterflow chiller.

Over time I've made this work out for me by necessity, and found among other things that a smaller space means fewer steps when it comes to cleaning and so on.

If the space was 9x12 it probably would be better as i could use the other side for storage.

Here's the interesting part: if i were to redesign, from a blank canvas, I'd do something very similar to what I have. I see some people designing brew areas that are all spread out and I can't see the advantage. I see people with big sinks, deep bowls, and I'd never go there (maybe it works for them, and if so, more power to them). My space is big enough I can use 20-gallon kettles and 10-gallon batches, and it's just fine. The pics below show the 10-gallon kettles; in the second pic you can see one of the 20-gallon kettles on the shelf above.

One advantage to how it's set up is I have the BK right by the sink; I have a short potable-water hose I use to fill it with cleaning water, and the pumps can send that water right down the drain when I want.

The other thing I'd never change is the sink's form factor. I have it sitting on a 4" rise of concrete so that the top lip of the sink is 40" off the ground. It's so easy to work at it that way, NO bending. I can lay a kettle or a keg on its side and spray it out, and it's great. No need to put them in a deep bowl sink. BTW, I salvaged my sink off someone's curb on junk day; they're hard to find, so if I were to do it again, I'd get a used or cheap sink base cabinet and drop a double-bowl stainless sink in it. I'd make it the full width of 6 feet, and I would have it, as I have now, at right-angles to the bench with the kettles on it. (The Counterflow Chiller is under the BK). The sink has a sideboard and that's hugely useful. f

Under that sink I have an RO filter I used to fill the blue aquatainer with water each time I brew. I have a small pump that empties it into the BK (two back surgeries, so even though I *could* lift that aquatainer, I think not). There's another sillcock under there that feeds both the RO filter and provides water for the Steam Catcher I use in lieu of a steam hood. I have a garden hose spigot in the garage I use for chilling, but if I were doing this from scratch, that spigot would be very close to the counterflow chiller.

The one thing I wish I had was a good cleanable floor. Mine is concrete; I wish it was coated in epoxy, AND I wish I had a trench drain in the middle to hose it all down. 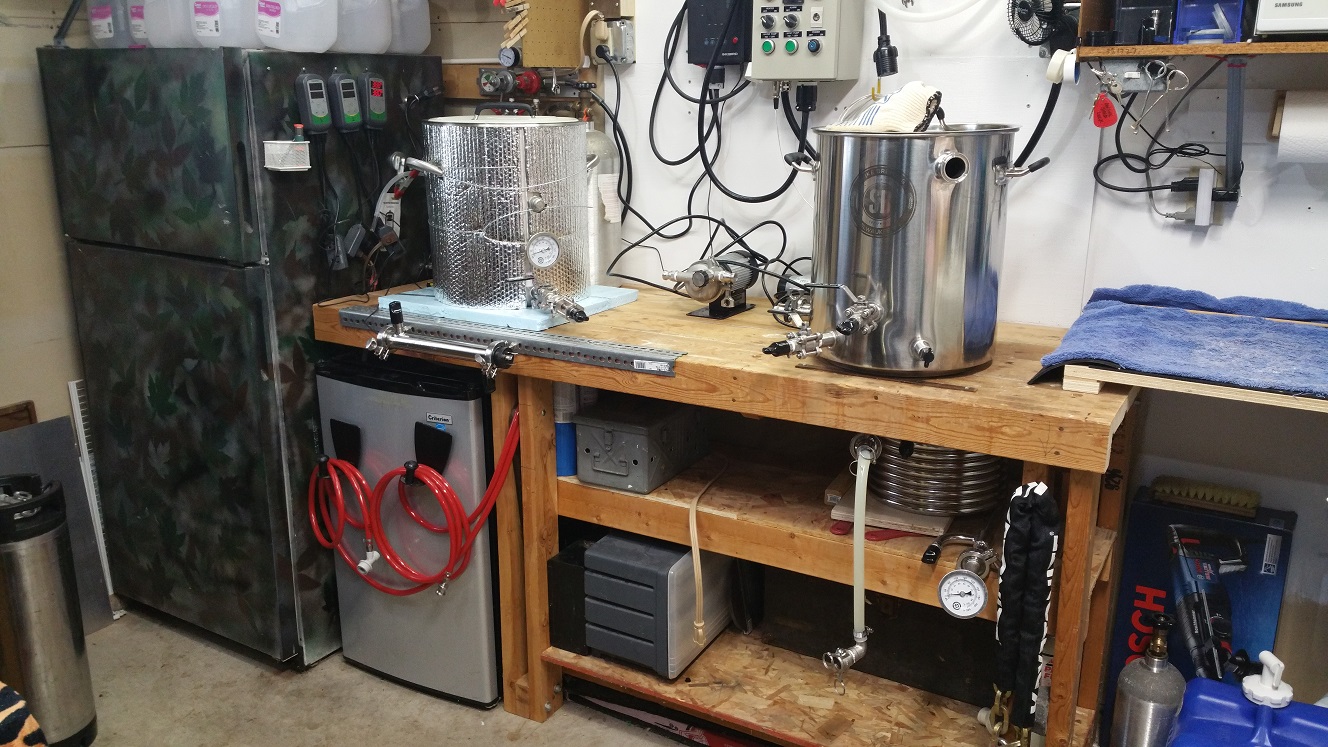 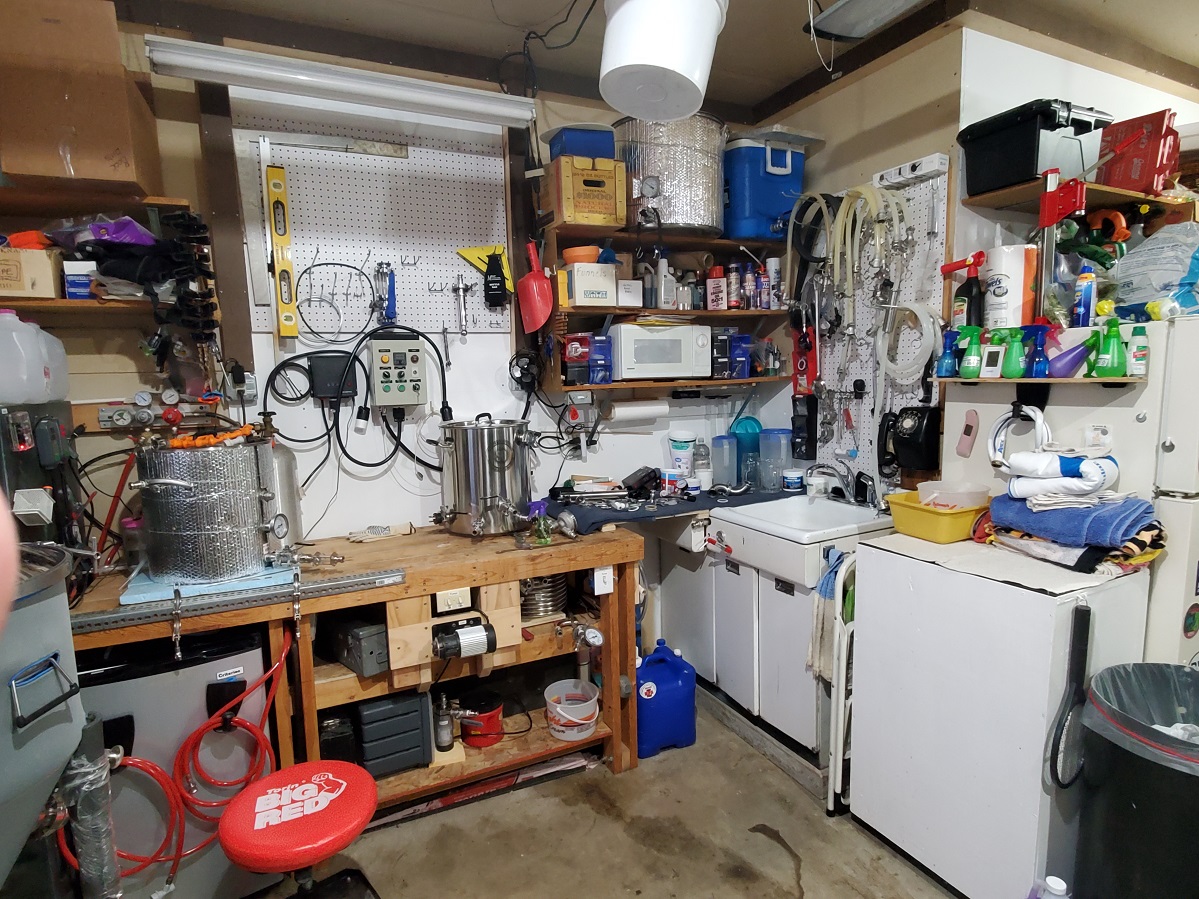 Thank you for the pictures and the comments mate, all very useful. A good, well placed sink and a floor drain I think will be important.
O

In an old condo I had years ago, we demoed the 1950's kitchen. and it had a stainless steel countertop that had an integrated sink. My personal electric brewing use case is different than yours, but if I had the budget I think putting the 3-vessels on a countertop that naturally flowed into a sink would be an elegant solution. There could be some issue with getting the kettle drains over a lip, but you could likely raise them up on block of wood/stone/etc. A quick google yielded 'Soiled Dish Table' as keyword.

That is a cool idea.
J

I just finished my space. It’s 10’x12’ I bought an ikea kitchen which was very reasonable for the price and look. Stacked two mini fridges for my fermenters to save some space but I’ve managed to squeeze a lot in there. The corner cupboards are tall enough to house kegs, various and two bucket stances in each other. I do however brew eBIAB so I don’t need as much room for the brew system as a 3V.

The floor drain and a good slope along with waterproof lower walls is about the best thing you could have. To be able to just hose out conicals over the drain instead of bear-hugging gear into a sink is so much better.

One thing I did with the big sink in my brewing area is to plumb in a couple of extra hot and cold water ports and waste drains into the backsplash. They all have QD males on them. When I hook up my SteamSlayer or my immersion chiller, water feeds in though a dedicated short hose and the waste goes into a drain port the same way. No dumping into my sink, no extra steaming.

I have a blank canvas room in my basement as well with no defined size yet. Great conversation and I got a lot of ideas already on things that I want to now add too. I will be cutting in a floor drain with a slope to a grinder pump out to the sewer system I have.

My one question is can I mount a hood not next to a basement wing window and plumb the exhaust using flex tube (large enough to handle to amt of output from the hood) over to the window about a total of 30'? I am unable to put the room over by the window.
R

I highly recommend a steam condenser over a vent hood, I have both and never use the hood any more. Here is the thread on building one and there are off the shelf options like this one from Bobby at Brewhardware.com. A vent hood requires make up air which makes temp control difficult. Vents are relatively noisy and if not done properly, will not work effectively. If you have a drain close by, it's a great way to deal with the steam. Originally I had mine draining into a bucket that I would dump every 20-30 min, but ended up plumbing it out the wall to drain outside. Good luck to you with the brew space!
E

Bobby_M said:
The floor drain and a good slope along with waterproof lower walls is about the best thing you could have. To be able to just hose out conicals over the drain instead of bear-hugging gear into a sink is so much better.

One thing I did with the big sink in my brewing area is to plumb in a couple of extra hot and cold water ports and waste drains into the backsplash. They all have QD males on them. When I hook up my SteamSlayer or my immersion chiller, water feeds in though a dedicated short hose and the waste goes into a drain port the same way. No dumping into my sink, no extra steaming.
Click to expand...

Any chance you'd be able to share a picture of this please? I'm considering something similar. Cheers. 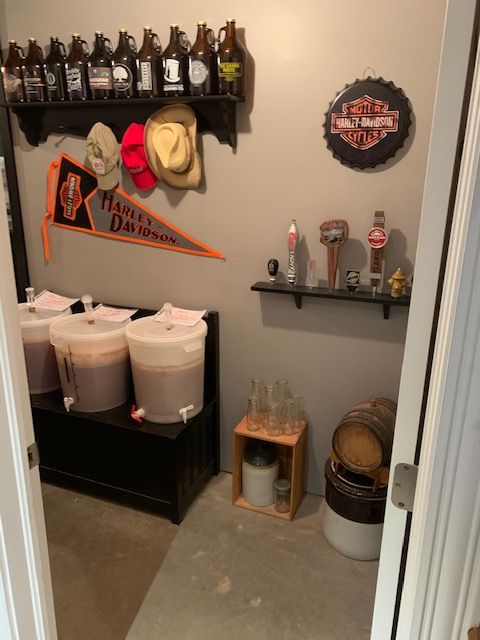 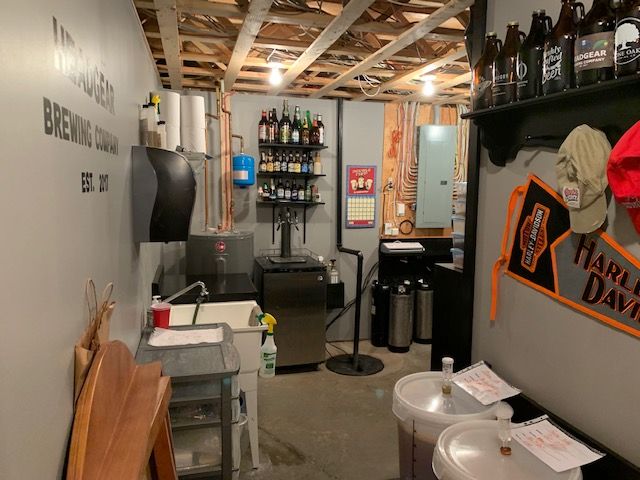 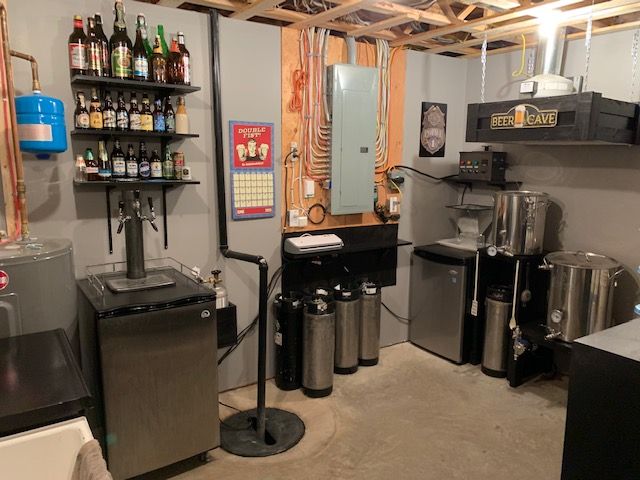 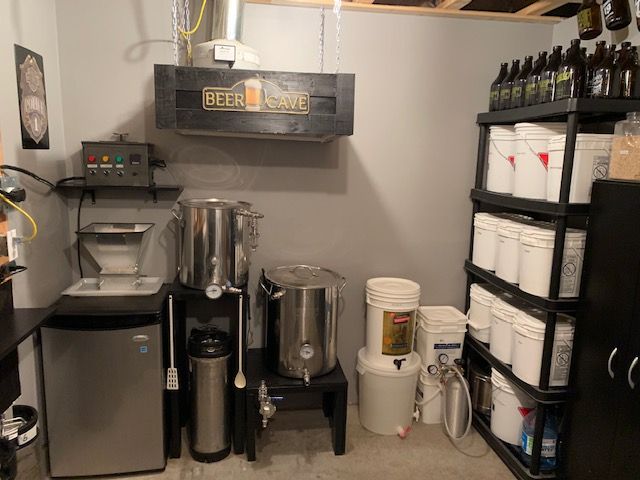 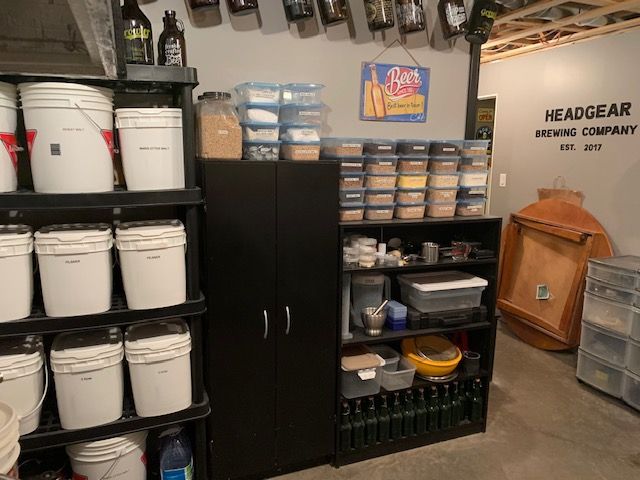 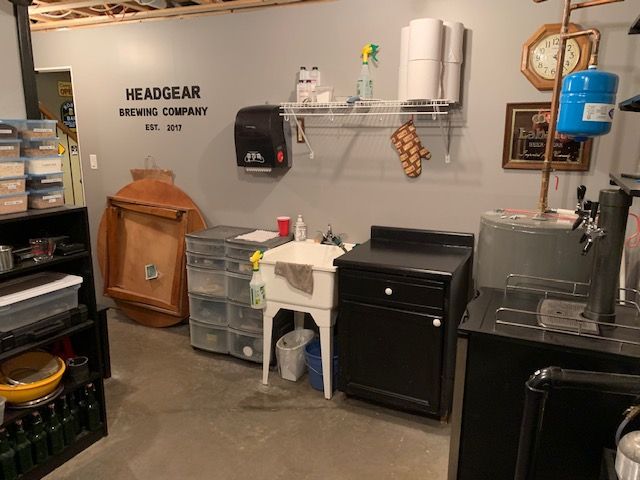 N
For Sale Unibräu All In One Electric Brew System - Turnkey Setup!