Firstly, on the breakfast cereal itself, it's main ingredients (aside from sugar) are corn, peanut butter, oats and rice, in that order. Then there are also some amounts of coconut (in the form of oil) and salt. The flavor of the cereal, aside from sweet, comes off as toasted cereal grains, peanuts, and an undertone of coconut and butter, with a hit of salt.

As far as mash ingredients go, I'm thinking that I will use popped corn, toasted steel cut oats, and toasted brown rice. (By toasted, I mean, roasted in an oven, around 350F until the color darkens some and the aroma changes) I also intend to use a few boxes of actual Cap'n Crunch Peanut Butter Crunch. I'll need some actual malted grain for enzymes, I'm thinking 6 row, since it has more enzymes than 2 row. I'm thinking I'll mix in some rice hulls with all this because I have no idea how this mix of ridiculousness will compact (or not).

I'm considering not doing a boil at all, just deactivating enzymes by taking it up to 180 for a little bit. I don't think there is much potential for DMS production based on these ingredients, but I'd welcome it anyway as corn is a big flavor component of Cap'n Crunch. I don't think there is any place for any aroma hops. Some bittering hop addition may be useful to balance the sweetness, as I plan to sweeten the beverage post-ferment.

For fermentation, I'm thinking about encouraging the production of diacetyl, as I note butter in the flavor of the cereal.

After primary fermentation, I'm thinking I'll transfer it to secondary with some toasted coconut and peanuts (or peanut flour).

After secondary, before kegging this monstrosity, I'm considering using some artificial peanut butter flavoring adding post-ferment (cause at this point, who cares?).

This post is not a joke. I'm serious. Your thoughts and ridicule are welcome.

Location
Just north of the middle of the mitten

The guys on basic brewing radio did a count chocula stout which apparently was good. So it'll definitely work. It seems you're taking it to a new level but more power to you.

It's the process after the mash I'm not certain with... Have you ever used these ingredients before? I might be worried about the oils from the coconut. Maybe you could use sirachi ace hops, which in my experience add a coconut flavor.

Sounds disgusting, but no ridicule here... That's the beauty of homebrewing.
Please share how it turns out.

My first thought (after wondering if it's a joke) was that you'd have unwanted oils from the coconut and peanuts. People have used those ingredients with steps taken to eliminate oils but not sure if they've both been used in the same batch.

I've been wanting to try a peanut butter chocolate beer and would use PB2 or other artificial peanut flavoring.

Let us know how it goes!

I'd add some lactose in there.

Also, you can use peanut butter powder - all the flavor without the oil.
OP
OP
A

Velnerj said:
I might be worried about the oils from the coconut. Maybe you could use sirachi ace hops, which in my experience add a coconut flavor.
Click to expand...

Not worried about head retention and hence some minor amount of oil. This is intended to be more of a "malt beverage" or "alcopop" than a beer.
OP
OP
A

Zimm9 said:
My first thought (after wondering if it's a joke)
Click to expand...

Not a joke. Sounds like a joke. But it's not. Brewing it sometime this weekend or next week.

There was a thread about doritos beer, including actual doritos.
You guys could collaborate. There needs to be a BJCP category for junk food beer.
On the other hand, with some of the stuff coming out of pro breweries or winning awards, you may be onto something.
(This reply is intended for entertainment purposes)
I will probably read your results too.
Last edited: Feb 10, 2018
OP
OP
A

I've decided not to use any peanuts or peanut flour (which many people refer to as PB2 for whatever reason) in the brewing process. Reading about other peoples experiences, I've yet to hear anyone say they got good peanut flavor from either of those, and more common than not it seems there are complaints about reduced yield based on moisture absorbed by peanut flour.

To prepare the oats and brown rice, I will mill them and then toast them in a 350F oven until they smell, well, toasty. The popcorn will be popped on brew day.

Since the only malted grain will be the 6 row, I'm planning for a long mash to let the smaller amount of enzymes work across all the mashables. The peanut butter cap'n crunch isn't going to hold up to a long mash and so I'll be adding it towards the end of the mash.

I'll mash at 146F to get a highly fermentable wort that should end up dry after fermenting (as it will be sweetened after fermentation).

I'll probably let the mash run about 2 hours, add the 3lb of cap'n crunch, then mash another hour. I'm hoping that by putting the cap'n crunch on top of all the grains and hulls, when the cereal inevitably turns to mush, it will stay on the top of the tun.

As mentioned, I don't plan to do a boil. Rather, I will use the RIMS setup to raise the temperature in the mash tun to 170F and then off to the fermenter it will go.
I intend for this beverage to end up with some sweetness, so I want some bitterness to balance it. I'll be aiming for about 20 IBUs. I don't plan to use any aroma hops as that seems quite out of place. I am going to add a small amount of 28% alpha hop hash dissolved into grain alcohol into the fermenting tank. I'll tailor the exact amount based on how much liquid ends up in the fermenter. I really don't have any idea how much liquid this bill will absorb in mash so I'll have to adjust the hop extraction on the fly.

After fermentation is complete, I'll keg it with some LorAnn's Peanut Butter flavoring and a bunch of chopped up peanut butter cups, as discussed in this thread:

It's looking like I'll be brewing this on Wednesday as it's the next warm enough day here. I'll take pictures for comedic value.

Following to see how this turns out. I love Cap’n Crunch. Haven’t had any in a long time so it’s now on the grocery list.

I don't know the exact details of how they pulled it off, but a local brewery near me (Triptych Brewing) did a Trix cereal beer recently with lactose sugars etc.. It was a ridiculous hit in my town!

Just made up a dry stout this afternoon. After grinding normal grains, but included Melanoidin malt, Dark Munich malt, and some acidulated malt (about 4%) when I was mashing in, I added 1/4 cup of Chocolate Flavor Malt-O-Meal and a big handful of Cheerios. I figured the grains of the Malt-O-Meal and chocolate wold go well in a Stout and the big hand full of Cheerios would also help to add mouthfeel. Then when the pot was boiling I added in cup of my coffee (strong black) from this morning. Experimenting is always interesting. DO WRITE DOWN all that you do. Anytime someone deveates from the norm it is a good idea to keep notes. Who knows, you may like it so well you want to replicate it again, and maybe that handful of Cheerios was all that it was to make it great.
OP
OP
A

This is what the worlds dumbest grain bill looks like: 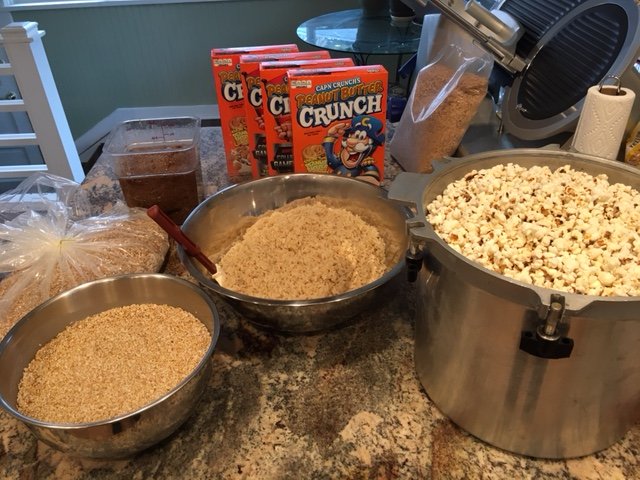 This is what it looks like when you're dumping boxes of Cap'n Crunch into your mash tun: 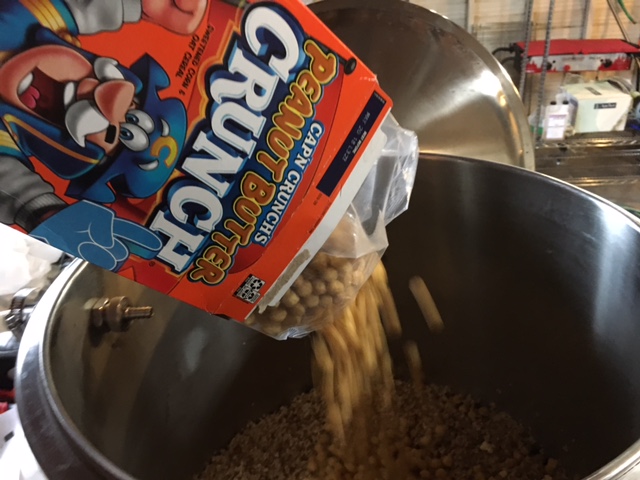 This is what ~11 gallons of the worlds dumbest grain bill looks like in your mash tun: 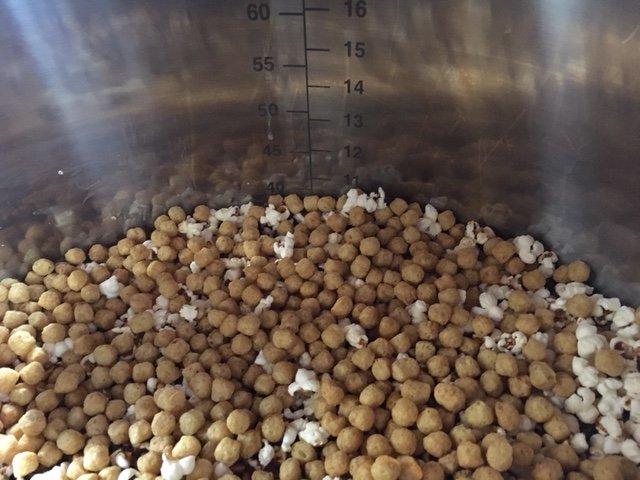 This is what it looks like when you heat the worlds dumbest grain bill via RIMS: 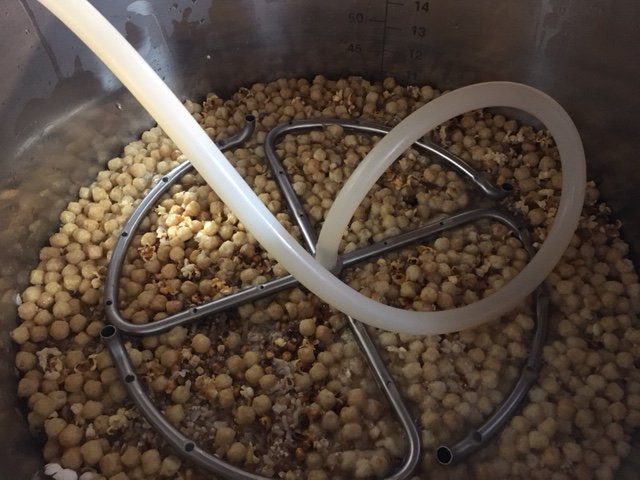 i guess im late to the party, but i was just going to say you should just get yourself some amylase enzyme for conversion. unless you want all the 6row in there. otherwise you could just let the enzyme convert it all.

also, i think it may have been noted before, but these are likely all simple sugars. maybe some lactose to add some sweetness and FG sugars?
OP
OP
A

I hadn't planned on doing a boil, but the volume that came out of the mash was more than I expected. I didn't know how much would be absorbed by this bill. I also felt the flavor could use some concentration.

The taste of the wort very much reminds me of generic grainy breakfast cereal. It's like a generically grainy oatmeal stout less any roasted malt. I found no discernible peanut butter Cap'n Crunch flavor in the wort, but with only ~20% of the bill being Cap'n I wasn't expecting anything overwhelming.

It's fermenting away at 62F with safale 05. I'll update again once it's kegged, carbed and tasted.
A

Whats the verdict?
OP
OP
A

It came out... alright. The aroma coming from a glass of it is definitely a bowl of peanut butter cap'n crunch, but it comes off with noticeable alcohol, which is somewhat unpleasant here.

I also think I made it a little too bitter. There's plenty of sugar remaining in it, so it starts off sweet and then ends bitter, rather than melding, it goes from one end of the spectrum to the other.

Lastly, this stuff is thick, too much body from the large amount of oats.

I don't mind a single small glass, 6 or 8oz. And it's an interesting beverage that most people have wanted to try a small amount of.

If I were to brew it again, I'd go less oats and less bittering, less grain overall to lower the ABV, and ideally, I'd be putting it on nitro.

Thanks for reporting back to let us know how it turned out!

L
How do I actually “taste” beer?